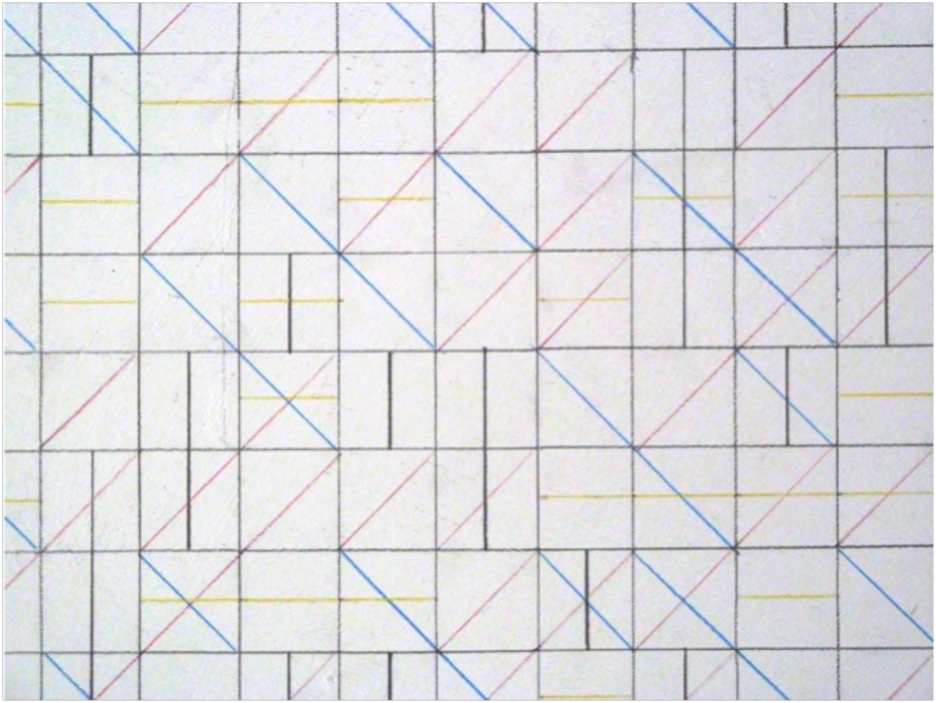 “A one-inch grid covering a square. Within each of the one-inch squares

As many lines as are desired, but at least one line in each square.

These are the simple instructions for Sol LeWitt’s “Wall Drawing #33” of 1970, which has been executed by student drafters in the Modern and Contemporary Gallery at the Utah Museum of Fine Arts. LeWitt, working in a conceptual idiom, navigated his over 1,300 wall drawings through the notion of art by instruction. By likening the role of the artist to that of a composer, LeWitt makes conceptual art tangible to the layman, under the impression that the artist composes a score while the drafters execute it.

Frequent patrons of the UMFA will recognize that curator Whitney Tassie has been especially interested in telling a more complex version of art history in the modern and contemporary gallery. She was especially excited to bring the LeWitt work, purchased by the museum in 2014, to the gallery, stating, “[LeWitt] should be in every museum collection … he is largely considered the father of conceptual art … and most artists today are working in a conceptual practice.” 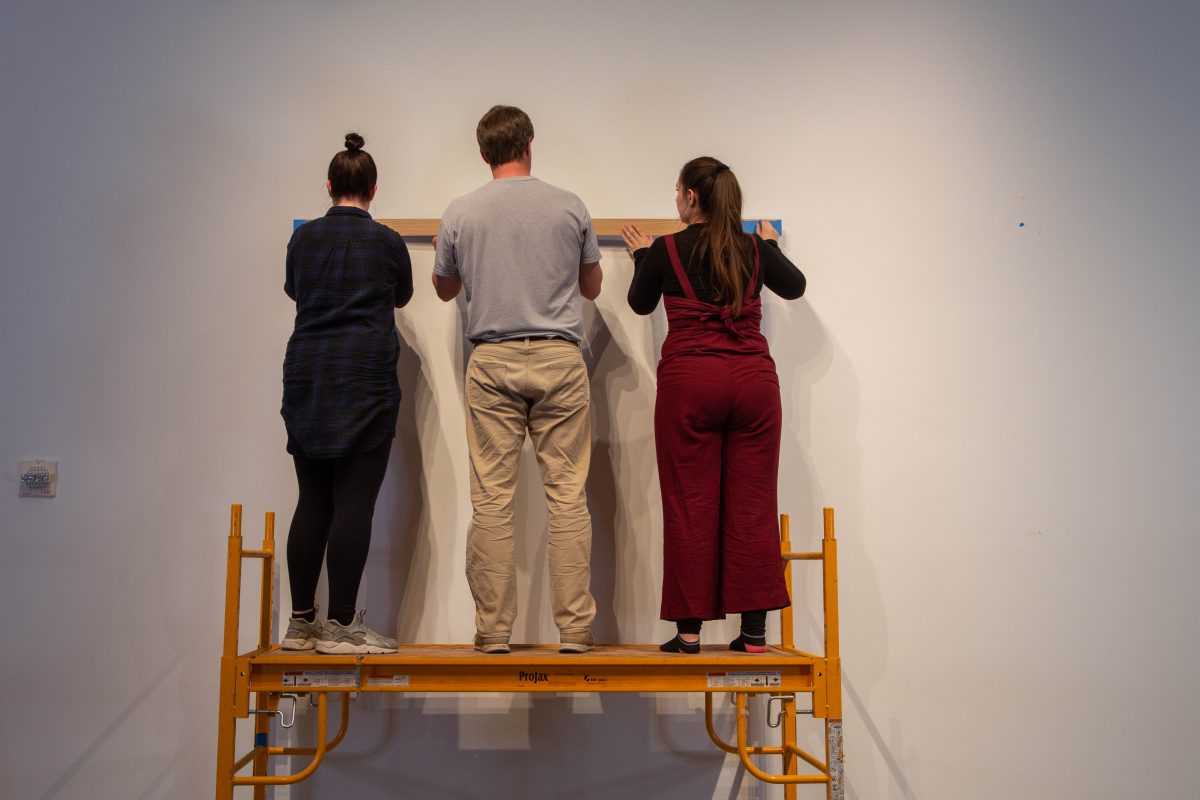 But what does this mean for the student drafters? Conceptual works like LeWitt’s undermine traditional notions of artistic authorship, handing the execution of the work to people who may have no artistic training. Iterations of LeWitt’s wall drawings have been created around the world by an array of drafters, with instructions for his works having more specificity than others. In “Wall Drawing #33,” the instructions invite the creative decisions of the drafters through the use of “or” and the phrase “as many lines as are desired,” and the execution of this work is no small feat, as the grid with which they are working is 100” x 100.” The student drafters at the UMFA said it was an honor to re-create a LeWitt drawing, as they are contributing to a lineage that remains canonical in the history of art. “More than anything, I am honored to be here,” remarks Kristen Bennet, third-year BFA photography student. “In a sense, [the process] requires some skill but it can be taught, and as an artist I appreciate it a lot more.” 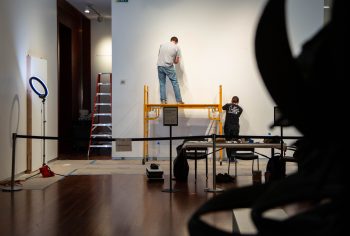 Roland Lusk (left) and James Hadley at work on day 4 of the install. Courtesy UMFA.

Some of the students describe the process as meditative — drawing 1-inch lines repeatedly for three hours straight over the course of 13 days. “As the grid gradually filled in, I found myself relying on the mantra that every line matters, and the connections that each line makes or breaks is just as important,” says second-year Art History master’s student and drafter Christina Jones. James Hadley, a senior BFA printmaking student concurs that the process is meditative, and adds, “I feel honored to be a cog in the process of putting up a Sol LeWitt drawing. Doing this project has made me think about how many people have worked on all of these wall drawings, all of these different people putting time, effort, and focus into making these works. … It is so interesting that when a visitor in a museum sees a LeWitt piece, they will recognize it as theirs.” 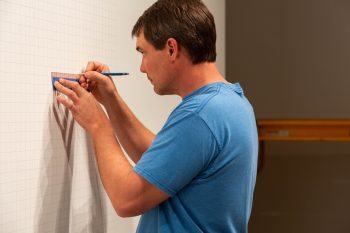 Since LeWitt died more than a decade ago (1928-2007), it is the job of a chief drafter like Roland Lusk to oversee the work and keep the artist’s ideas at the forefront of his mind, both aesthetically and logically. “He doesn’t say not to do a pattern, but from precedent, I know that’s not what he wants,” Lusk says. “While the lines appear to be uninformed in their placement, the process involves a formulaic approach to keep the lines dispersed and seemingly random while simultaneously keeping within the scope of Sol’s idea.”

LeWitt himself laid out the parameters for conceptual art in his seminal “Paragraphs on Conceptual Art,” published in a 1967 issue of Artforum: “In conceptual art the idea or concept is the most important aspect of the work. … it means that all of the planning and decisions are made beforehand and the execution is a perfunctory affair. The idea becomes the machine that makes the art.” This “planning” is what ultimately lessens the sentimentality of the process and heightens the strategies to render a work of art.

The notion of the idea being a catalyst for art production combined with the impression of variability is intriguing, complex, and something the student drafters have hinged themselves to throughout this process. “To me, in art, the most difficult part is the conceptual side of things. Conceptualizing the purpose of the work, the ideas that it engages with, as well as its formal elements and the processes needed to make it happen,” Hadley comments. “So, could anyone install a LeWitt drawing? Maybe, but the drafter definitely leaves their mark on the drawing … with their own unique touches and sensibilities.”

Jones comments, “Although my physical labor may [be attributed] to LeWitt on the wall label, his instructions allowed seven people to choreograph this whimsical, delicate routine. That experience and the ending visual result are more satisfying to me than public recognition, and I’m delighted and honored to have had the opportunity to contribute to LeWitt’s conceptual legacy at the UMFA.” 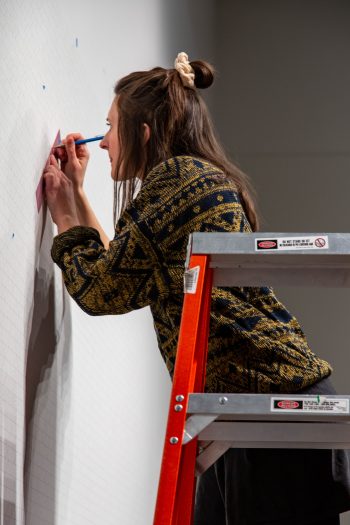 In other fine arts disciplines, the title of genius is not exclusively applied to the screenwriter or composer, but also to the collective actors, musicians, directors, and conductors. Art based on ideas rather than on forms allows us to extend the title of genius to the drafters, the contractor, the curator, the broker, and whoever else is involved. The final results are an amalgam of ideas and impressions that can never again be re-created, approximating the uniqueness of each interpretation to that of a fingerprint.

In the ‘60s and ‘70s, LeWitt’s wall drawings were seen as radical steps forward in contemporary art, and even today the pencil marks on a wall from the instructions of an artist who died over a decade ago still might seem edgy. When LeWitt’s statement, “the idea is the machine that makes the art,” is fully embraced, it can be acknowledged that the simple wall drawing that continues to be performed long after his death subverts the normalized belief that art is a timeless, ephemeral object, while coincidingly evoking linguistic and methodological approaches as holders of meaning.

“Wall Drawing #33” (1970), by Sol Le Witt, installed by U of U students and draftsman Roland Lusk, will remain on view for approximately five years in UMFA’s modern and contemporary gallery. 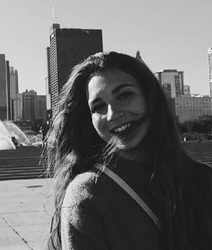