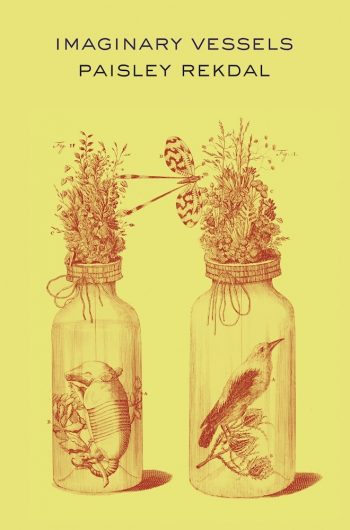 Paisley Rekdal, who won the 2013 15 Bytes Book Award in Poetry for “Animal Eye” (as well as an impressive number of other fancier prizes), has published a new book of poetry with the prestigious Copper Canyon Press. As with her previous books, Imaginary Vessels is sheer pleasure to read. Words tumble over each other in an exuberance of language that seems effortless, in spite of the fact, or perhaps because of it, that quite a few of her poems have formal structure and rhyme revealing meticulous craft. The book is a poetic concept album, concerned with themes of containers and what’s held inside them, in particular the vessel of the female body.
In the poem titled “Vessel” the poet watches a man opening shellfish with a (Freudian) knife, their “labial meats winged open,” and Rekdal feels sympathetic pain:

become what no one

the thing we want

And yet, these poetic vessels also hold more sensual and pleasurable aspects of beauty. The images that unfold in “A Peacock in a Cage” move deftly out of prison walls toward the light and into a sheltering space that protects a sense of privacy and enables a moment of transcendent joy:

Shaking out its corona of tail feathers is like light

glowing in a bulb, a man

dancing inside an elevator

Two of the five sections within this book are particularly good.

Section II, “Go West,” offers a group of 14 interrelated poems about Mae West, whose outsized persona becomes a vessel to hold both pervasive stereotypes of women and a strong feminist counterattack. The imagined voice of West, by turns comic and tough (but never wilting or regretful) offers advice on freedom, censorship, marriage, aging and prayer, and in “Self-Portrait as Mae West One-Liner,” Rekdal even tries to squash herself into Mae West’s wasp-waisted corset:

The other standout is Section IV, “Shooting the Skulls: A Wartime Devotional,” a set of ekphrastic responses to photographs of skulls taken by Andrea Modica which are reproduced here on glossy white paper heightening their impact. Although in real life these bones belonged to patients in a Colorado mental-health institution, to Rekdal they evoke images of war—Dong Re Lao, Hanoi, Phnom Penh, a plane shearing into the Pentagon, Lynndie England – as she pictures her Chinese-American relatives in battle, fighting against people who look like themselves. But mingled with the horror is a delightful sense of graveyard humor. For instance, Rekdal imagines that an incomplete skull, “F20: Male, 29 Years Old,” is a set of “windup jaws dismantled for the joke,” whose owner might have defended himself by biting the doctors; “Portrait of E4: Male, 34 Years Old,” reminds the poet of a roadkill armadillo with its broken shell taped back together; and “C11: Female, 54 Years Old,” though dead and buried, nonetheless retains a charming sense of vanity:

Was it envy that made you recollect me, peel off

my earthworm crown, my negligee of roots?

The final poem, titled “The History of Paisley,” ties it all together as the poet seeks at last to inhabit her own name, though in a deliberate irony this poem takes its name from another poem by Agha Shahid Ali. Ali attributes the paisley design to the Hindu goddess Parvati who once became so enraged at her husband Shiva that her footprints scorched the earth with the form of teardrops. In myth, the two deities eventually reconciled, and so the Paisley motif woven into fabric becomes a symbol of reconciliation and the healing power of tears. This final poem offers the sheltering power contained in a name, echoing the ever self-assured Mae West who declared, “Diamond Lil is all mine. I’m she. She’s I,”

It is raining in the vales of Kashmir, Scotland, Utah.

Beloved, let us watch, and get our faces wet.

Come: let us sit together under this shawl.