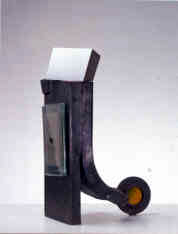 Every year the Utah Arts Council sponsors a Statewide Competition/Exhibition. The themes of the exhibition rotate among Painting and Sculpture, Crafts and Photography, and Mixed Media and Works on Paper.

This year, the Bountiful/Davis Art Center held the Mixed Media and Works on Paper exhibition. This particular theme tends to draw more experimental artists and encourages more traditional artists to explore beyond their usual mediums.

157 artists submitted close to 400 works and 64 pieces by 47 artists were chosen to hang in the show. The jurors for this exhibit were Christine Giles, Associate Curator of Art at the Palm Springs Desert Museum, and Bruce Guenther, Curator of Modern and Contemporary Art at the Portland Art Museum. Both jurors were surprised at the amount of abstract art submitted, and the 47 artists who were juried in to the show seem to share that common thread of abstraction in at least one of their pieces.

Giles and Guenther carried out a collaborative jury process, including the awards for the cash prizes. The subject matter did not reveal a quality representative of Utah as one might expect from regional shows. Abstraction created from found objects seems to be an overriding theme that generates a contemporary feeling of mystery. Bruce Guenther revealed his criteria when he stated, “Materials and process, form and intention were the foundation and criteria upon which I made my choices for inclusion in this year’s exhibition … I sought out works that might involve the viewer in the mysterious power of simply seen things. I chose artworks that for me are concentrated and clear in their intention and resolution formally, and suggest something beyond their making.”

Arley Curtz, director of the Bountiful/Davis Art Center, was pleased to host this year’s exhibition which ran from September 7 through October 5th. He was thrilled at the amount of new visitors the exhibition brought to the art center in Bountiful.

A portion of the exhibit will travel throughout Utah during the year.