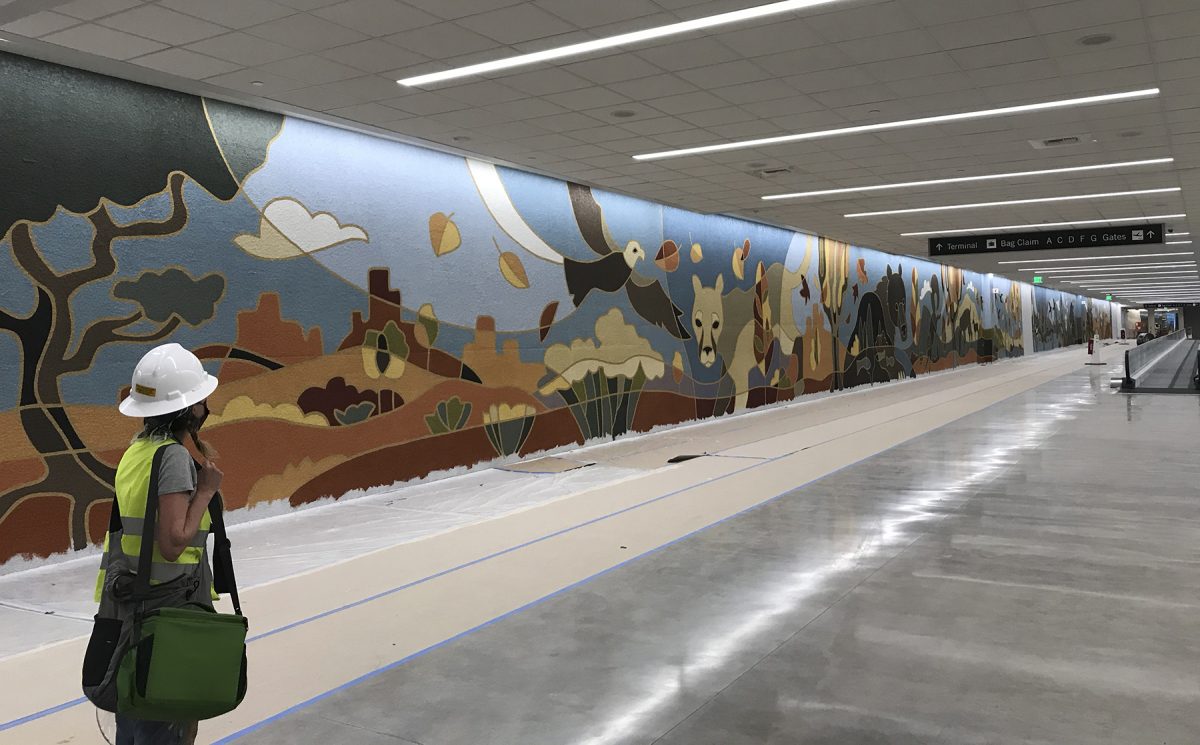 It’s an art show you can’t get in to see without a ticket – to Providence, or Paris, or even just to Portland (Oh, wait, not going there right now).  Yes, Salt Lake City’s new International Airport is operational, with a decent budget for art, though most work by Utah artists is located inside its 24 bathrooms or along a temporary tunnel. And COVID means it costs a lot more than the UMFA to get in the front door.

Utah muralist and metal sculptor Traci O’Very Covey, whose increasingly recognizable work (seems like she is seen everywhere lately) was accepted for both tunnel and toilet areas, is thrilled to be included. “It felt like it was right up my alley because of the theme,” the Salt Lake City artist says. A moving walkway runs on the west side of the 990-foot-long tunnel between the A and B airport concourses and O’Very Covey and Austin, Texas-based muralist DAAS share the opposite east wall with their alternating interpretations of Utah’s seasons: DAAS uses bold hues and metallics for his largely abstracted scenes of wildflowers representing spring, and valleys and canyons filled with snow for winter, while O’Very Covey, a native Utahn, opts for a more stylized interpretation of summer and fall. 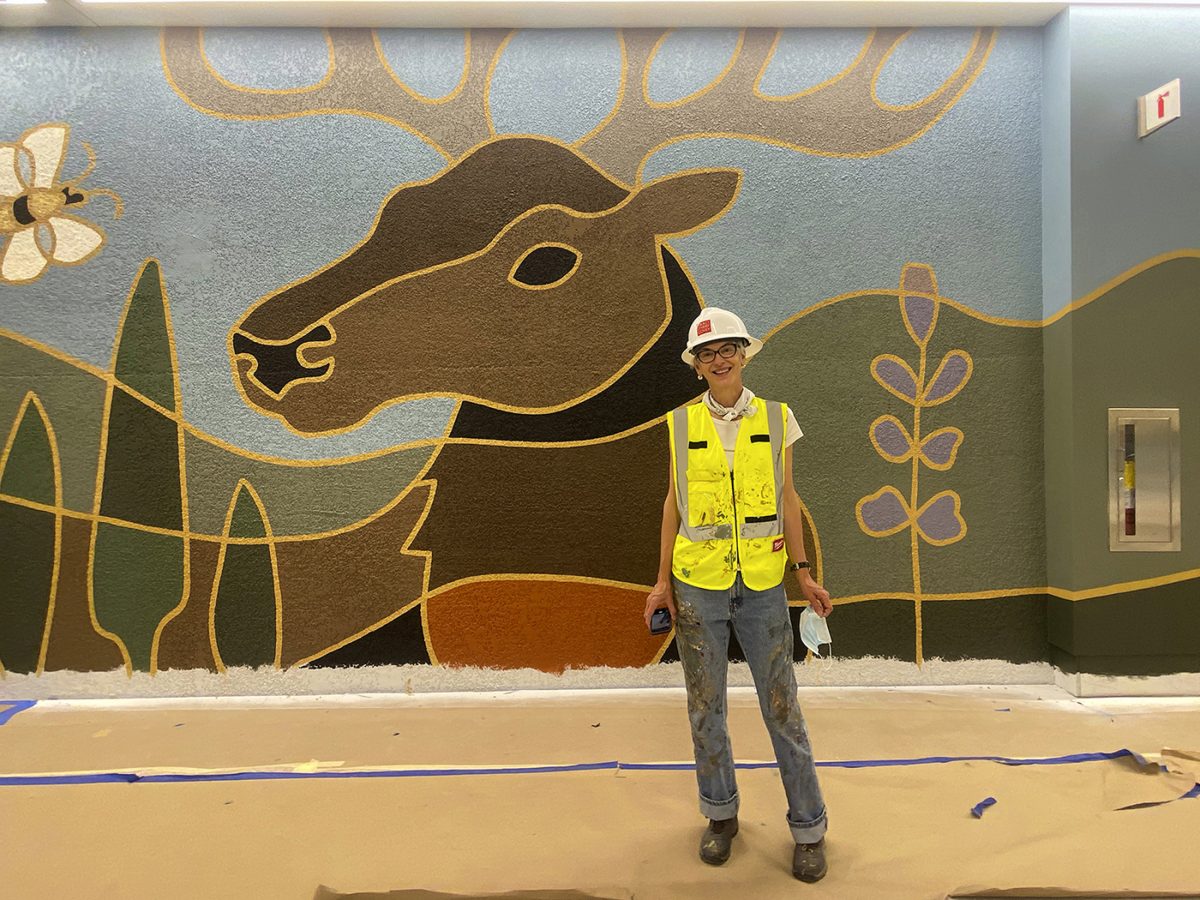 Traci O’Very Covey in front of her mural

Her murals are all about color, representational but abstracted, and typically based on flora and fauna: “The imagery in my work consists of elements from nature, figures entwined with organic forms — things that elicit positive emotions in me. The figures are often symbolic or allegorical,” she says.  “I believe that everything in life is interconnected, that our energies are intertwined. In my art, the colorful, simplified forms are combined interacting and mingling with each other to communicate a sense of oneness . . . I am interested in creating a harmony of color, shape, and line . . . “

A raffish two-toned brown bear with several fish in his tummy stares out at the viewer as acorns and leaves fall from surrounding trees; there’s a bearded bison in the foreground beneath a sky of white and fluffy clouds, while another beast presents way off in the distant hills in summer; an eagle in a leaf-filled autumn sky flies toward a charmingly perplexed young mountain lion; an enormous elk seems to smile at the winged bug approaching its nose.

“When I became one of the four finalists, I showed the summer mural to them as my project in a Zoom meeting; COVID meant I couldn’t present to the committee in-person,” O’Very Covey recalls. “We went down to see the tunnel – to see how big the wall is. It is quite textured,” she says. “It’s one big, long wall with my two murals on it. There are 20 feet on either end of the wall, so the murals are 154 feet each in length and the mural goes up to the ceiling and the ceiling is 11- to -13 feet because the tunnel kind of dips,” she explains. 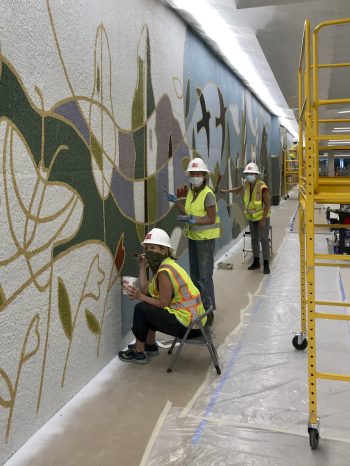 O’Very Covey projected her initial drawings on the tunnel wall in sections to scale. “I draw everything by hand and digitize it so I can project it,” the artist says of her process. “The lines go down first. Then the painting begins. I painted along with my crew. I love to be right in front of a big wall of color and paint a large-scale piece like that. I think it is the biggest piece I’ve done,” she ponders a moment, and then decides that it most certainly is the biggest, larger than even the Smith’s Daybreak Mural recently commissioned by UMOCA. It took her dozen-person crew (including four local artists — Lenka Konopasek, Stacy Phillips, Lindsay Frei, and Corinne Humphrey) more than six weeks just to paint.

In terms of painting on an everyday basis, she says her crew had to go through strict safety training. “We wore boots and hard hats and masks. We went through the COVID questions and had temperatures checked daily along with all the other construction workers. They wanted to keep the site as safe as possible,” she says.

The tunnel was built 15 years ago in anticipation of the $4.1 billion airport project and then sealed up; these murals will remain open to the public only for about three years, until a new, permanent tunnel connection is completed in 2024 (which will house Gordon Huether’s “The River” art installation). The present tunnel then will accommodate just airline personnel, baggage handlers, and similar employees. 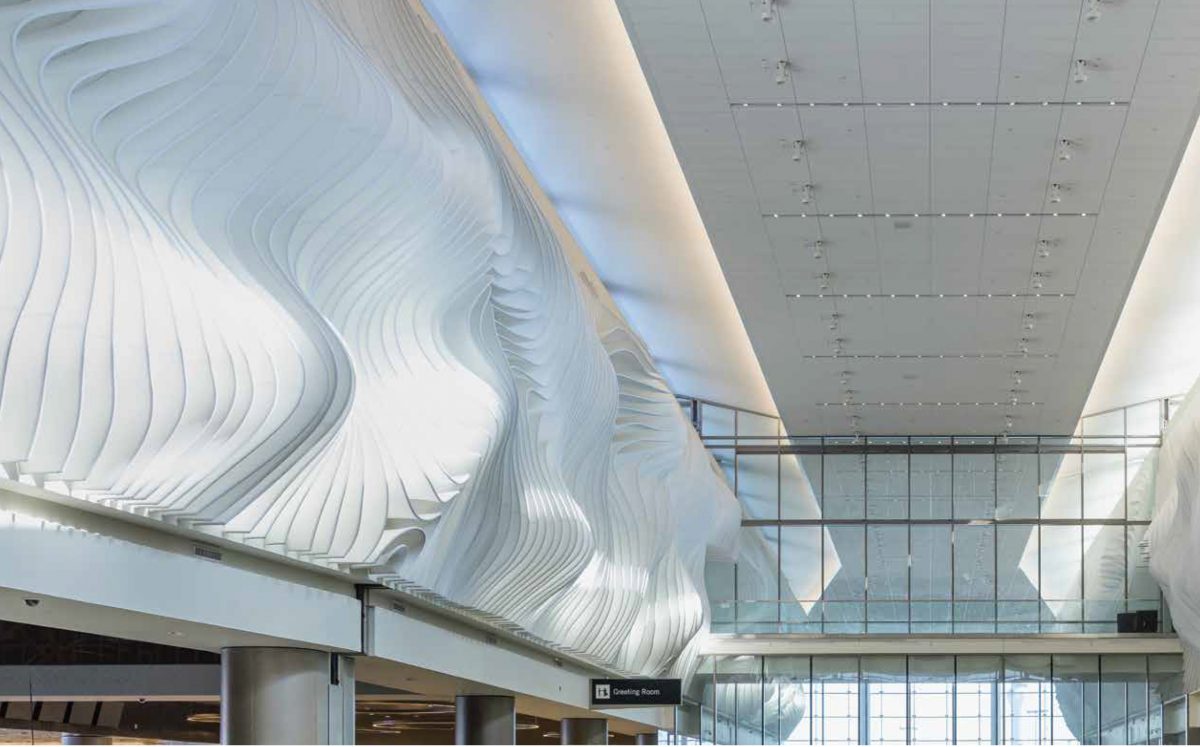 There ultimately are to be seven major art projects throughout the facility created by California large-scale installation artist Huether, the consulting artist on the new airport. Several of those are now installed: “The Falls,” a 5,000-pound sculpture of colored hand-pulled glass pieces and Pyrex rods that plummets the length of the escalator well; the artful and self-explanatory “Benches;” and “Column Plates,” four 18 x 17-foot seating areas whose wavy patterns echo that of the centerpiece sculpture that spans the length of the new terminal called “The Canyon.” Inspired by slot canyons in southern Utah, the work consists of overhead fins in different sizes and shapes that change color with the assistance of a programmable lighting system and attempts to mimic the experience of traveling through an actual canyon, ultimately arriving at a 50-foot floor-to-ceiling glass wall framing the Wasatch Mountains. Lauren Calder, marketing coordinator at Gordon Huether Studio in Napa, says they highly recommend viewing “The Canyon” from the mezzanine level at the entrance to the airport.

Huether also oversaw the selection process for the four-season murals in the mid-concourse tunnel, as well as of the 18 local and national artists chosen for the so-called “Whimsy Walls” project in the 24 restrooms — located 300 feet apart so that passengers are no more than 150 feet away from the next facility, or the next art installation. This latter project was done through a partnership with the Salt Lake City Mayor’s Office and the Salt Lake City Arts Council and the Department of Airports: a panel selected from among entries that were to reflect the culture, landscape and spirit of the state; winning works were made into vinyl wraps and installed across from the stalls. There were nine Utah artists (if you include ex-pat Adam Bateman, who submitted from Oregon); three from Oregon; two from California; one each from Illinois, North Carolina, New York, and New Mexico.

O’Very Covey’s “Whimsy Walls” piece is titled “On the Wing.” It’s symbolic, she says, “of the lightheartedness of flying and portrays an uplifting feeling as birds take flight from the heart area of the chest [of the central female figure] and soar out into the sky. The trees convey nature, abundance, and the growth that travel brings.”  She adds that having seen one of the loo works installed she feels that “the artwork captivates, taking up a whole big wall [about 60 feet] in the bathroom. I am happy to be included as one of the artists. The work creates a big impact.” 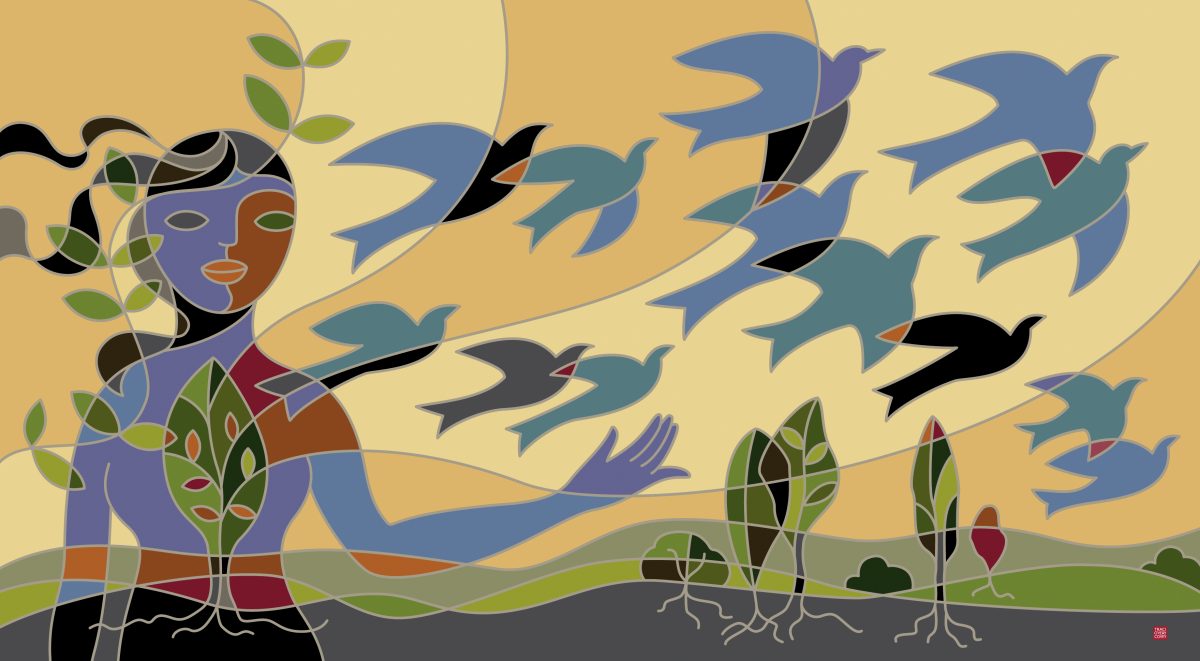 Traci O’Very Covey’s “On the Wing”

What you are seeing with Adam Bateman’s loo wall is an image of stacked books. “It’s a closeup image of a piece I did called ‘The Fourth Thousand Year,’” Bateman says. It was installed at BYU in 2011 – a 41-ton work that stood 14 feet tall and was held in place by gravity alone. It took Bateman 600 hours to complete.

Salt Lake City’s Trent Call says his abstract “Lake Bonneville” work was inspired by the Pleistocene depths of Lake Bonneville’s sea floor. “I imagined the residue of this vast ice age lake that once covered the airport site and 20,000 square miles of the Great Basin leaving its shoreline visible on the foothills of the Wasatch Mountains.” As to the location in the loo, Call says: “Artwork in bathrooms is all well and good to me!  But it seems like there still can be much more improvement,” he adds, and references a recent 99pi episode on the subject.

Highland, Utah, artist David Adams was awarded walls in two loos and says he wondered at the time he submitted to the airport for the project if restrooms were appropriate for fine art. “Well, it’s architectural,” he answers himself. “I don’t have a problem in that sense. It’s getting people where they need to go.” The artist pauses for a beat, then immediately says with a laugh, “I don’t mean that tongue in cheek.”

Adams says he was taught that art can come alive if you do it right, and his colorful and energetic work does indeed engage the viewer, especially with the piece in the Concourse A restroom, “Cloud Over Hearts Rolling.” The title, Adams explains, “is a portal, but also a look inside of me. My work tends to be put together in a landscape format . . . and I did several pieces around the same time that had to do with water and sky and there was a cloud part; I saw a heart developing and I let it stay as a figure development . . . I’m looking for a number of things. I want to create energy using contrast of value and color and forms, to a certain extent . . . they don’t always reveal themselves [to the viewer]. Every time you come back, they reveal something different. It’s an intuitive process.” The artist’s other work, “Bottle of Wildflowers,” is a still life, “a take on still life deconstructed and abstracted, in a way, a take on the concept of still life, a still life set outdoors.”

Visitors can find out more about each artist’s work by scanning QR codes outside the bathroom door. A collection of artists’ inspirations for the Whimsy Walls is on display at the Greeting Room, outside of the security area near baggage claim.

Also located in a security area is a final work that’s of local interest at the airport: “Near Distance,” an art wall project located by the TSA checkpoint. The Salt Lake Arts Council picked Salt Lake City-based Soonju Kwon, Reihaneh Noori, and Hannah Vaughn to design, fabricate and install the 8-foot by 30-foot wall made of salt, charcoal, plaster, and copper. It symbolizes, well, they didn’t get back to us on that, but it has all the Utah elementals.

And, of course, once you can actually get into the airport itself after the COVID threat subsides, you still won’t be able to see the local art without a ticket — to get past security and the new “Near Distance” wall.