We’ve always thought Sundays are a great day for reading — whether in an easy chair with your favorite paper, curled up on a couch with a good book or out in the park with your favorite ereader. With that in mind, we’re going to be running a regular Sunday feature about books and writing. David Pace, our new literary editor, will be helping us out, organizing reviews of fiction, poetry and nonfiction works, particularly books by a Utah author or with a Utah or Western U.S. connection.

(and we’ll be running these in the monthly editions as well).* You might even find us publishing some original writing here. You’ll also find a number of reviews of national and international books dealing with the visual arts, and every once in while we’ll sneak in a review of a literary work that is not associated with Utah but is associated with the visual arts. To kick things off, here’s David … 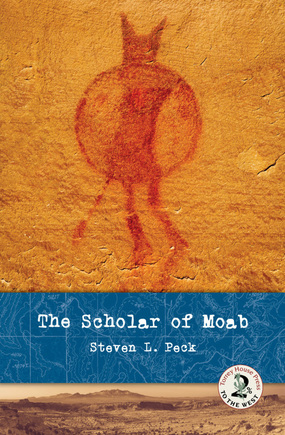 Hyrum Thayne, the protagonist of Steven L. Peck’s riotously original novel The Scholar of Moab, writes, “I think this story is interesting cause my other friend had strange things happen too.  There are weird things in the world.  Strange even for a Scientist & Scholar like me.”  The story Hyrum is speaking of is his friend Rick’s story, though Hyrum’s story, told in the novel by the anonymous “Redactor” who, a generation later, is trying to get to the bottom of Hyrum’s mysterious death in the ‘70s, is no less strange.

The “other friend” Hyrum refers to is another important player in the book, Dora, a poet and resident of Moab—yes, that Moab, the red rock town nestled near Utah’s La Sal mountains.  Peck’s epistolary work involves space aliens (maybe), a missing baby whose paternity is in question, and conjoined twins with PhDs  who, for five critical years on horseback, wrangled cattle–all in a town and its environs whose characters, including Hyrum, mix uneasily and phantasmagoric-ally with geologists, communists and imaginary Book of Mormon-era robbers.

A cross between Jude the Obscure (referenced, clumsily in my view, at one point in the novel) and Huck Finn, Hyrum is a simple man who is not so simple.  He is on a quest to be a scholar, and his notion of a scholar has more to do with appearances and the “right” vocabulary than innate brains or long hours in academic discourse.  (“I glanced up at the mountains rising before me,” he writes in his journal at one point, “& saw my own climb into Scholardomhood.”) But he is sincere, and therefore both hilarious and touching.  In his adventures as a sensing station technician for the United States Geological Survey, he works up in the mountains all week before returning on the weekend to his adoring simpleton (truly) of a wife who is nesting in a trailer park.

At one point we find our (anti)hero  torching the entire reference section of the Grand County Library, ostensibly to divert suspicion from himself as he steals its non-portable dictionary, in which he hopes to look up the flurry of words he’s heard from his new scholarly associate in the field, words such as “X a Jesus,” “doggrowl,” and “Lazy fair.”   “I began to feel more & more Adjudicated  in what I was doing,” he says, equating himself with Leonardo Da Vinci’s robbing graves to study anatomy.  “[A] whole bunch of such things that are pretty darned hard and time consummating…”  (The malapropisms throughout are worth the price of admission.)

In another scenario we find Hyrum in company with the suspicious poet, Dora, in those same mountains, a kind of liminal space for all strange things that happen to Moabites.   Crazies abound in this story, but Peck is sincere in positioning them as auguring questions about the nexus of consciousness, faith, desire and the natural landscape.

Many of The Redactor’s  documents are taken from Dora’s diary, filled with free-association and conflations between first and third person.  Here is one such passage:

Will cryptogramic soil evolve to become some intelligent thing as its components specialize, differentiate, and explore new spaces in the topology of life?  This she wonders.  And she wonders, because she wonders what will become of her son’s children.  In to what creature will her line transmogrify?  What possibilities will arise?  None.  Unless I can find him.  Unless I can take back what is mine.

These rants from a woman who ends up, we learn early on, in the state mental hospital in Provo, simply punctuate the overall arc of the story, which is more coherent and, regularly, fall-off-the-bed funny.  But their inclusion attests to the author’s respect for his wide cast of characters and for the wonder that emerges out of not only the mind but the unfathomable universe and its products.  They are products as varied as the brilliant Milky Way high above the La Sal on a dark night, “the silence voiced by a plateau canyon wind,” and that moment when one feels “both immeasurably small and immeasurably important in the same instant.”

Hyrum Thayne is a part of the growing line of memorable Mormon literary characters that extends back through Levi Peterson’s  Frank Windham  in his The Backslider, Samuel Taylor’s Jackson Skinner Whitetop in his Heaven Knows Why and Maureen Whipple’s Clorinda in her The Giant Joshua, among others.  There have already been a handful of breakout or crossover Mormon novels over the years.  I think this is the most imaginative to date, perhaps corroborated by the Association for Mormon Letters which awarded it Best Novel for 2011.  And if the book doesn’t find an audience outside of Utah, it won’t be because of its local religious content and references.  In Scholar one can easily skate over at will the arcane references to home teachers,  Lamanites and the LDS lifestyle even while picking up on the essential (and delightful) atmospherics.

As it is, The Scholar of Moab tumbles forth, pell-mell, with generosity and a wry eye for the exquisite frailty of our desire to find not only meaning in the universe, but a purpose for our existence.  Any answers that are given easily—whether in philosophy, in science or in religion—never seem to be  completely satisfying— are often vastly unsatisfying.  Only a narrative that is as big-hearted and deftly-written as Peck’s can suggest the whole of the world and our stubborn longing for a unifying theory of truth that will always, thankfully for the purposes of literature, elude us.

*Editor’s note:  15 Bytes considers literary works of poetry, fiction and nonfiction for monthly review within its pages, particularly books by a Utah author or with a Utah or Western U.S. connection.  Send review copies to:
Artists of Utah
P.O. Box 526292
SLC, UT 84152