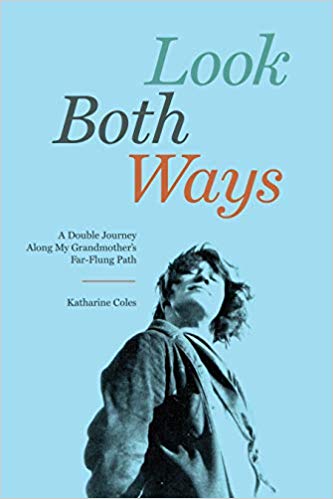 After finishing Look Both Ways, I found myself recommending it to friends based on its ability to cause me to rethink imagination, history, and gender.

It’s an imaginative book, self-imaginative. It’s a biography/memoir by Katharine Coles that centers on her grandmother, Miriam Wollaeger Link, and their respective journeys around the world. At one point in the book, Coles says, “I can only imagine,” as if to imply that’s all we can do with history and even ourselves. She’s the former poet laureate of Utah and a professor of creative writing at the University of Utah, so the book does juxtapose those elements of her life against her grandmother’s own accomplishments, making for an interesting doubling, or, as Coles subtitles the book “A Double Journey Along My Grandmother’s Far-Flung Path.“

Both Miriam and her husband Walter, Cole’s grandfather, were geologists in 1920s Wisconsin and traveled widely for the oil industry at a time when the demand for “black gold” was surging. In Cole’s recounting of their lives, she imagines her grandparents’ lives through her own; she imagines the alternative by being the alternative. Coles insists that she “won’t change their story,” but she does imagine a different fate for herself, perhaps suggesting the overwhelming violence of imagination and how we should try to refrain from reimagining others’ fates for them and stick to reimagining their fate by reimagining our own. And despite this, she still finds herself comparing herself to her grandmother and asking, “. . . in her place, her time, could I have been braver? With all my freedoms, can I now?”

There are moments in reading this memoir in which imagination feels like a revolt: Miriam’s imagining against Walter’s imagining, of life and relationship and love. What Coles points out is not just the physical/social/economic violence of/in American marriages like the Links’, but also the imaginative (metaphysical?) violence of such relationships. At other times, imagination feels like resistance: if one could not actually resist, then at least the imaginations and hopes we hold are and can be enough. I’m more willing to believe this by how, toward its conclusion, Coles dovetails her book with the #MeToo movement and other contemporary feminist solidarities.

At another point Coles even suggests much of contemporary sexism is the result of myopia: “[My grandfather] never could have imagined,” she writes. She argues that many of the resolutions we seek will be had by testing out new methods until our imaginations, made practical by analyses tested by adventures, produce actual solutions. Amid these attempts, she asks, “[A]m I progress?” Insistent not to carry on remiss traditions — not to make the same mistakes of the past, not to repeat history — Coles searches/condenses history and takes the anxieties of history on both imaginative and physical journeys to reimagine the present into a better or at least more clarified future. Look Both Ways is an epic on how imagination both prepares and causes a history to unfold. It offers the juxtapositions of imagining something before, imagining something during, and imagining something after, ultimately demanding that we ask ourselves what difference each of these imaginations has on/in our history.

I found myself asking these questions about imagination at least partly because of how opaque the book is (and I mean this in a celebratory manner). Mostly the opacity is of the sort that causes one to be self-reflective, of the sort that turns the self back to the self. Coles herself calls her grandmother’s history “a window and a mirror,” and if you are looking for a window and a mirror, or if you are looking for the sensation of looking out the window as you sail into/out-of/from the harbors of life, then you will experience that here in this book. You will experience a window half-glazed in light, with enough light on the outside to see outside (the self), and with enough light on the inside to see yourself looking. In this way, the book oscillates (as the daylight does) with interior, illuminating meditations by Coles that reveal us to us, ourselves, and just enough transparency for us to see what she is pointing at in her stories and images and adventures.

The text does not lead you by the hand, but leaves you to your own designs, your own reflection, captivated but free (much like, dare I say, traditional concepts and practices of marriage leave us). Miriam’s condition often seems to be the general human condition, held captive by life, a paradoxically limited freedom: To be; but what? To do; but how? To move; but where?

The resolutions are indistinct, even impossible, something one must come to terms with — both in the book and in life — if only by constantly imagining resolutions. But I am (as I imagine Coles, her grandparents, and all of us are) uncertain. Concerning her grandmother, Coles says, “first uncertainty wore on her, then certainty,” and I couldn’t help but feel that the author included this because she had felt this herself, and I won’t protest to the suggestion that I also mention it because I, too, have felt this way.

Perhaps it is all right, as the text suggests, to have initial intentions that are allowed to transform: to take the “I am” in love and transform it into an “I will” marry you. But then I feel this weariness and anxiety: How can we take the “I am” of being and metamorphose it into an “I will”? How can being ever coalesce properly with becoming? How can we ever do this, how can we ever commit to a future we do not know?

I find myself recommending this book, also, based on how it addresses history, how Coles’ writing is a double journey, how her two-histories-toned sentences suggest that history is always by our side, impacting our lives. Even the title, Look Both Ways, is both a word of caution, and also an encouragement to look more, to see more, to experience more: looking as both a self-pleasure and as a self-preservation.

Coles makes all of this looking more obvious in the way she has structured the book as a comparative history had by journey — her dangers in modernity as a traveling poet, her grandmother’s dangers as a scientist in the past. She has created the book in a way that doesn’t just put her story in the same narrative as her grandmother’s, but gets them speaking side by side in a sentence. She has taken on the herculean task of trying to take a large personal history and reduce it to its most essential and entertaining parts, parts that include her. By this, I see her suggesting that we are (or at least should be?) the future that wants to see the past again (be next to it, be close to it), that there are some futures that want to replace the past and others that want to preserve them: “awaiting a future that wants to see [the past] again.”

This book is just that, a historical approach, a way of approaching history, a way of walking into an antique store, into a stack of diaries. (The book, in fact, is based on diaries and papers written by Coles’ grandmother and rescued from what appeared to be pending disposal.) There are so many ways in which we could do this, and Coles offers one. She fleshes out the dead, while trying not to flush them out. She reads her own history and declares she won’t change it. She reveals how she is chilled by her history, and I also am chilled.

This perhaps is why this book is important; because we have to ask ourselves who is responsible for interpreting love and relationship, gender and responsibility; because the book asks in a very real way (by narrative, history, form, content, text, etc.) who is responsible; because I am asked, as a reader (and a male one at that) to take the risk of reviewing myself (i.e. making a review myself, and revealing myself), the risk of passing a judgment, the risk of making a statement (or restatement to myself and others) and be so chilled.

Coles, herself, has done this. She has sat down and written this book, taken risks, made assumptions, made guesses, all the while trying to avoid overly doing so. She feels compelled to do a thing she should be careful of doing, and then does it and tries to find justification in the doing of it while she does it. She tries to explain it as it happens, tries to understand her grandparents, tries to help her partner understand her own adventures.

Katharine Coles tries so many things in Look Both Ways. She tries for so many adventures, possibilities, solutions, questions. The past, invisible to us, converges (maybe fortunately, maybe unfortunately) with the present imagined moment and even with the offing. Should we hold them apart? No.