The Ecclecticism of Lenka Konopasek 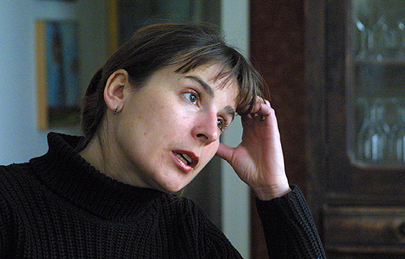 When artists from other countries work in Utah (which, despite some protests to the contrary, is hardly a melting pot) they are often labeled as a pure product of their country. Viewers automatically look to see clear evidence of that in their work. Some galleries around town even carry artwork created by artists specific to a particular nationality or culture. Mestizo Gallery carried Hispanic work exclusively. Liberty Art Gallery at Trolley Square currently represents mostly Russian artists who paint mostly landscapes of their native country.

Salt Lake City artist Lenka Konopasek was born and raised in the Czech Republic, but finding a “Czechness” in her art might prove difficult. Despite the location of her upbringing, Lenka also lived in Germany and traveled extensively, but for the past fifteen years she has been a permanent resident of Salt Lake City.

Konopasek is often labeled as an Eastern European artist. She is proud to be Czech and she says her country will always be a part of her, but Lenka is a good example of an artist who does not impose a culture on her artwork; she simply creates art and allows her inherent culture to manifest itself where it may. Her travels and her tendency to explore different subjects and media contribute to the eclectic nature of her work.

Four years after graduating from the School of Applied Arts, Painting, Architectural Design and Scenic Design in Prague, Konopasek immigrated to the United States. She earned a BFA at the University of Utah and soon after earned her Masters at the Maine College of Art in Portland, Maine. Pursuing a career in art has been a full-time job ever since.

Being a product of different cultures and influences is not the only thing that makes it difficult to categorize Konopasek; over the past fifteen years she has worked in a range of media including painting, sculpture and mixed media. She’s experimented with abstract styles and representational styles. “My art has changed over the years so much – it evolves. To me it makes perfect sense. In the past three years I’ve done a lot of three-dimensional work, and I’ve used a lot of things I’ve found. I’ve used boxes, suitcases…that has been on my mind a lot, but I needed a break from it.”

Although her art has changed, a common thread of exploration manifests itself throughout the years. Konopasek says if exploration is in fact a theme, it’s more of an inward exploration than an outward one. “I think exploration is equal to creation. You can’t create unless you explore. Going through grad school I was more conscious about what I was exploring, about finding my place in the world, my confusion about where I am and my connection to where I’m from.”

A quality of exploration and eclecticism appears to manifest itself not only in Konopasek’s artwork, but also in the way she decorates her home. Her house is warm, colorful and inviting. Everywhere you turn something new finds you; whether it’s a painting, a photograph, a collection of Konopasek’s eyeglasses or a piece of Cordell Taylor’s furniture. Konopasek and Taylor have been together for the past twelve years, and Konpasek is gradually bringing different furniture into their home. She likes the furniture Taylor makes, but she says it can be a little overwhelming and sometimes harsh; so she’s brought some softer materials into the mix. Variety and balance in her home seems to make her comfortable as she allows the diverse styles of furniture and artwork mingle in pleasant agreement. This appeal for different styles coming together makes sense in regards to her artwork.

Konopasek doesn’t like the idea of categorizing her art, but if she did, she would call it mixed media. Most of it is commentary on the practice of painting. “I started with a lot of abstract work, but lately I’m very realistic. The only thing that is not real is the fact that it’s out of focus; other than that, it’s very real. I have always been playing with this idea that I want to be a sculptor, but I’m always painting. I don’t want to call myself a sculptor and sometimes I have a hard time calling myself a painter. That gets difficult when applying for teaching positions. They want to categorize you in an institutional setting. They get frustrated if you do too many things.”

For several years now, Konopasek has taught at Westminster College and the University of Utah. When asked if teaching art has influenced her work, the artist replies: “I think on some level — it informs me; how other people process information and how they communicate. And when you teach art, there’s a lot of young energy, and that energizes me. There was a drawing class up at the U last summer with a lot of non-art majors. It was really interesting because I wanted the students to ask questions during the other student’s presentations. What’s interesting is what happens during those discussions. It was great because they actually started arguing with each other. They were able to clearly verbalize what they wanted to say. I just sat there absolutely quiet. Most of the time you as a teacher do all the talking and you’re begging people to say something. During this discussion I spent most of my time calming them down.”

Konopasek is currently teaching five art classes. That sounds like a full-time job in itself, but she still depends on the sale of her artwork for much of her income. “I’ve been selling a lot of my work through Torrey, through Denver and on my own. A lot of people buy the art for what it is, but sometimes they buy it because it fits their idea of color – and that’s fine. I sell a lot of landscapes because they’re pretty. I don’t think everyone understands that my landscapes are about serene beauty in a major disaster.” The landscapes are aerial views of the flooding that took place in central Europe a few years ago. The floods affected many countries including the Czech Republic.

Konopasek tries to go back to the Czech Republic once a year, and both she and Taylor have exhibited there, but transporting their artwork is always a challenge. “I don’t know how it would work now with security. I don’t know how we would take the work – especially Cordell’s. I don’t think we can ever get his stuff back because he makes bomb-looking stuff: big metal balls with wire coming out of it. We traveled with all of this in suitcases a month after 9-11. I knew they didn’t have the scanners yet so I knew we could get it there. If they stopped us to look at it I’m sure we would have spent a nice long vacation in Cuba or Guantanamo Bay.”

For an upcoming exhibit Konopasek will show with Kim Martinez and Maryann Webster at the Utah Arts Council’s Rio Gallery in February and March. “The pieces I did before were much more expressive and painterly. Now they’re tighter and there’s not so much my personal style in there. I’m trying to make them look as old masterpieces, yet they are completely contemporary.”

At the exhibit, look forward to a series of Gainsborough’s “Blue Boy” where Konopasek has painted isolated sections of the original and put each in its own frame. This helps the viewer explore areas of the Gainsborough in ways they may not have before.“As much as I really dislike the 18th Century era of art, there’s something about the fabrics. And I have all these gold, gilded frames that I’m fixing and I’m now making the paintings to fit the frames, so the frames are taking over more – it’s kind of going in the opposite direction. There’s something about gilded frames that is so overpowering, and when you go to the museums, that’s how most of the frames are. It’s such a great representation of high British art and taking some of the more abstract areas that don’t get a lot of attention.”

Konopasek says her art is often about the way she looks at painting. This must change or evolve as she further explores herself as her artwork investigates so many styles and ideas. “I want to call this exhibition “Borderline” because I think Kim’s paintings are also about the beauty of painting, but she’s using kitschy material – it goes back to her Hispanic background. I think it’s very difficult being labeled as something. Kim works with a lot of social issues so she wants to be labeled that way. I’m from Eastern Europe so I’m always labeled as an Eastern European. I’m having a hard time with the Gainsborough because of that. I always had a hard time being labeled as an Eastern European, an immigrant, or even as a female artist; my work definitely reflects some of those issues.” 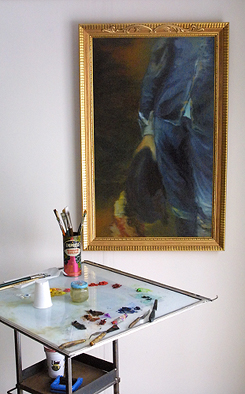 Because Konopasek has experimented with so many mediums, styles and subjects, it would be impossible to categorize her artwork – or her for that matter. Yes, she’s from the Czech Republic, but her interests reach beyond her nationality. She is a product of different cultures, backgrounds, societies and ideas. The culmination of these makes for an artist with eclectic tastes, interesting perspectives and numerous ideas that never cease to stimulate her creativity.

“Borderline” featuring Lenka Konopasek, Kim Martinez and Maryann Webster opens February 13th and will continue through March 15th at the Rio Gallery. The Rio will be open for Gallery Stroll on February 20th from 6-9 PM.
This article originally appeared in the February 2004 edition of 15 Bytes.

Tagged as: by Steve Coray