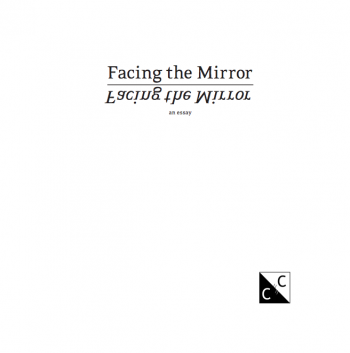 Face it, Katherine Indermauer’s chapbook Facing the Mirror says: since mirrors arrived, people, and our world, have never been the same.

So powerful are mirrors, says this small spell of a book — an essay which also has, mildly, sometimes, the feel of a scientific/alchemic journal – that the I in it, Indermauer feels she must change to I/I. To be followed, by Eye/Eye. We/We.

The mirror between is a fracture. Refracted light. What kind of solipsism is this, the self split? Can we even say “I” and remain one? A schism in speaking. I/I as riven as world.

These intentional stutters are a writerly indulgence in an essay which also reads like an intense, almost scientific/observational journal – by a person deft with language. Over and over, the essay’s theme is we, you, I now are not the same: we are, at least, doubled. And doubled. And doubled again, in multiple ways: rearranged forever into a kaleidoscope. By the dance of mirrors.

There is, yes, just as in looking more than a few moments in a kaleidoscope, a headache quality about sustaining too much thought about mirrors, light, reflections, self-consciousnesses, any consciousnesses. Too much refocus required. Mental blinking, while reading this chapbook, is unavoidable; but the unblinking scrutiny of this subject is due to the author’s belief that the mirror is “a sacred object.” And a sacred object is hard, possibly impossible, to face.

Let alone be responsible for. What else, but a sacred object, could bring a person seven years’ bad luck, should they drop it, and it breaks?

Instead of The White Album, this could be The White Chapbook, its cover purely white, except for three blue words of title: Facing the Mirror. And the same three words reflected back, in gold, as if they lean toward water to see their reflections, like Narcissus.

What do we see? Different than what we see. What we see almost does not look like English words: they look Hobbit, or Cyrillic, or Middle Eastern, upside down and unpronounceable and unrecognizable. They look wrong.

A lesson. Even before the chapbook’s begun, we find ourselves locked out of private dialogue/understanding between reflection, and source of reflection. A closed conversation, as if between identical twins. A lesson in mirrors.

But, to cheer yourself, consider that we, onlookers, can still always see differences between almost perfectly identical twins, which even they might not suspect (unless they studied themselves pretty endlessly – in the magic mirror of film). And, more cheer, a mirror does not necessarily lock others out forever; an example is the singer/dancer Madonna once saying she could not count the number of years she danced watching herself in a mirror, before she became confident enough to dance publicly. (A mirror can be private, and tutorial, an audience.)

Indermauer, like Madonna, thanks mirrors: mirrors showed her, she writes, how to be beautiful, showed her she was beautiful; thus, one’s kind and patient (good) mirror can be a teacher, a cheerleader, a practice stage: wonderfully formative.

Of course, there are the darker, more troubling, sides of mirrors, as written about by Shakespeare, Poe, Hardy, Plath, Wilde, Carroll, mythology, fairy tales. And Woolf, who famously wrote, in her essay “A Room of One’s Own” that women had “through many centuries” been magic “looking glasses.”

The magic of the fairy tale mirror is its lucidness. It perceives the truth more clearly than the truth can be seen … mirror’s silence, too, is their honest telling.

But that plain white cover and those three words, Facing the Mirror, in shy, quiet print may be far too quiet for this chapbook, this endless expanding subject. Compare a plain white cover with three words on it with the carnival din of mirror-created kaleidoscope interiors; Indian fabrics with flecks of mirrors stitched in dance patterns into them; the slanting-aside mystery of artists’ self-portraits, never quite looking to you, but to their co-authorial mirrors.

Figures at telescopes, finding old planets or new stars, peering into darkness unfathomable except by the magic of primary and secondary mirrors bringing light into a tube of dark. Or even more “seeing through a glass, darkly”: the first successful photographs, daguerrotypes, were created using mirrors; glass happened because Italians wanted to see the color of their wines as they drank; and light, the ancient Greeks were sure, emanated from their own eyes.

Or Shinto shrines, which, according to the author, contain, in their centers, each, a mirror. Or a girl’s jewelry box, containing a tiny mirror found underneath its jewelry-box lid. For what? For whom? To throw a sparkle of light at a tiny mechanized ballerina, twirling to the tune of the jewelry/music box’s bright/sad tune? Or for the ballerina to be able to see her pirouetting reflection? Or, to remind ballerina of her humble beginnings, the tutor of mirror-lined practice rooms, from whence she came? Or, to remind a girl there is always her, and her reflection, the person others see?

Glass-sealed mirrors, in Europe, preceded Shakespeare by only one century. Harold Bloom said in his book that Shakespeare “invented the human.” But is it mirrors which have made us sacredly human?

Mirrors, except in their original form (in water) are fairly newish history. Ancient Egyptians used hand-held highly polished, curved, silver-and-copper-alloy mirrors; not much later, the Chinese polished bronze. Much later, Venetians layered glass over high-sheen tin and mercury; later, silvers and coppers and aluminums came along, as polished metal underlayers.

And mirrors now are the modern, sacred offerings of robots: robots now make mirrors, carrying the heavy and dangerous sheets of glass, fearless amid sprayed metals, buffing grit, and polishes.

In her chapbook Indermauer tells us how many mirrors are in the French Palace of Versailles – 257 – “arranged like windowpanes” to double the garden views seeable in the palace. She tells us too about mirrors over Frida Kahlo’s bed: during a horrendous and long recuperation from an accident (from which Kahlo would never fully recover), mirrors allowed Kahlo to paint recuperation self-portraits, to draw art from idleness and pain.

Mirrors, which fired the evil stepmother’s envy of Snow White, were also enviable. “The early church,” Indermauer writes, “banned the use of the mirror because its reflection was known to trigger hypnosis, a trance state.” How odd, as the word lucid, from Latin lucere, she notes, “means to shine, of course, from light.” And Latin lux means an abundance, a luxury of light. And, Indermauer notes, the mirror, “like the moon, is gathering her presence from light.”

Add these together. Do mirrors reveal a church insecure about power, or clarity, or trance states, emanating from any source other than itself? A church jealous of the sun, and any reflecting mirror?

Consider, too, says the author of Facing the Mirror, that words, too, are mirrors; because words, really, are only “reflections of things.”

How can it be that all these statements are so true, so simple, yet so hard to face? Because mirrors, reflections, and how they affect us are so entrenched in our souls, they’ve become a constantly present twin from whom we can only free ourselves through sleep, or separations from civilization. (It’s interesting to note that, in addition to being a widely published (and prize-awarded) poet, and an editor at various lit journals — Sugar House Review, also once at Colorado Review, and Alpinist – Katherine Indermauer also has a significant outdoorswoman’s resume: she knows well what it’s like to be distant from a mirror; no doubt these experiences have informed this study/book.)

Mythological Narcissus, in this chapbook, is saved for the very end, the last page of Facing the Mirror. In a time during which, lately, the term narcissist is perhaps the most rampantly and popularly applied all-purpose insult, readers may wonder where his lurking self, in this small book, might be.

The way Indermauer greets the idea of Narcissus, kneeling to see his image in the lake, and being transfixed by his mirror image, in mythology and lore, now on her page, astounds:

“Is God not Narcissus?” she exclaims. “Having made from His own image, and then staring still?”

If too much of the dizzying sparkling wonder of Katherine Indermauer’s chapbook is reported here, giving too much away, it’s because this review surely must at least try – to be reflection.