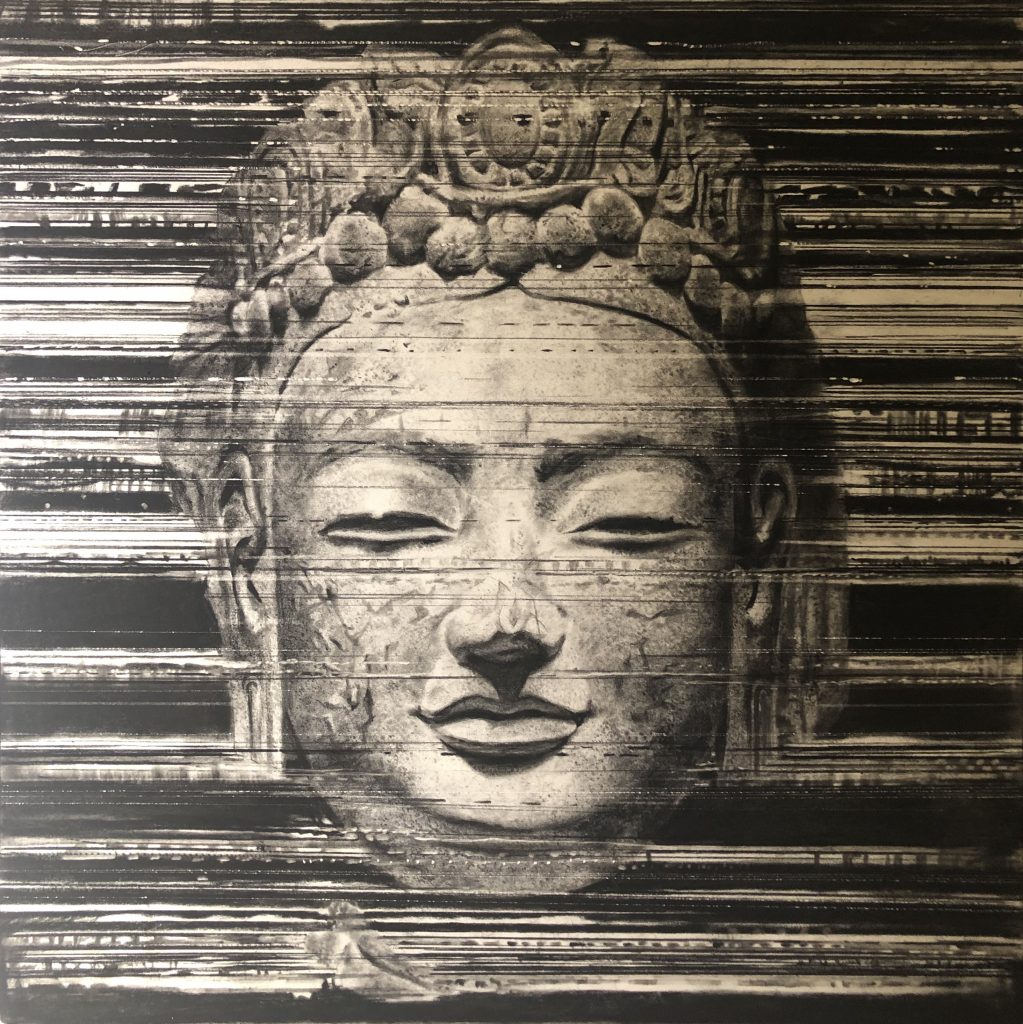 For now we see through a glass darkly; but then face to face: now I know in part; but then shall I know even as also I am known.
(1 Corinthians 13:12)

“Coming Through” represents a familiar Asian face, close up, one of nine small portraits of Buddha among the twenty five paintings of In The Mind’s Sight. Symmetry of features and a sense of tranquility give it a beauty that shines through some extensive optical noise, which in turn suggests transmission under challenging conditions, like bad TV reception or a NASA signal from a distant planet. On closer inspection, some of the flaws are not the fault of the medium: they are damage to the original, perhaps an antique stone head from a plundered temple. There’s a point pressing forward, which could be that flaws in communication can conceal errors in what is being said, or that in spite of layers of resistance, what Keats identified as the beauty of truth is eternal and can come through any obstacle.

In a subtle and indirect way, each of Terrel VanLeeuwen’s elaborate, densely studied black and white paintings is a portrait of the artist: not so much as a man, but as an event in nature, which, after all, each of us is. At some point during the countless hours he pours into each of these richly textured arrangements of light and shade (frequently working all night, according to his wife) he becomes convinced he has intuited what the image — partly observed, partly imagined, partly the product of artistic technique, but entirely his own — wants to say. So his life’s work makes a suitable metaphor for how we each construct a personal image of the world and our place in it. VanLeeuwen further includes a self-critique: an element that reminds us that what we see only represents what lies behind it, but does not contain it. That is his choice of medium: Conté crayon. 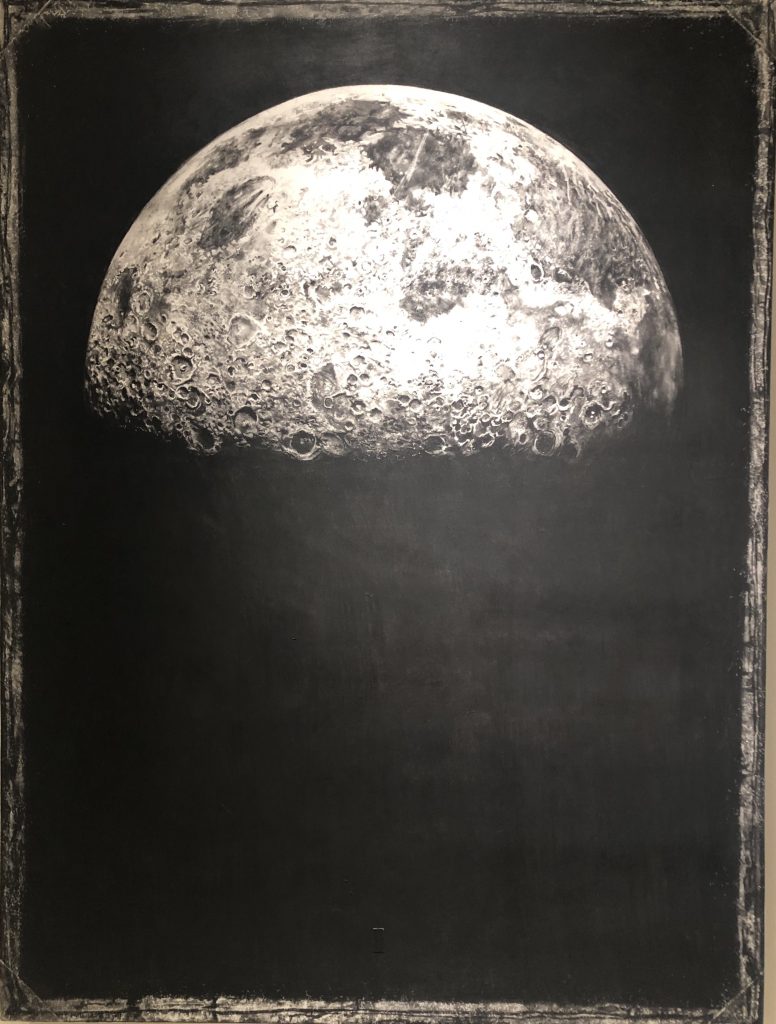 The choice of a single medium is not one many artists make, but it has been made by some of the most highly regarded, some of whom also restricted their choice of subject matter or presentation. VanLeeuwen (on a video he appears to pronounce his name “Van Lewin”), on the other hand, says that, “By using Conté crayon, I can have a wide range of subject matter yet still have a consistency of work.” But it would be simplistic to say that consistency is the only result of his choice. A Conté crayon is like a large, soft, usually square pencil that permits many of the effects familiar from charcoal and pastel media, but without necessarily sacrificing the precision and unity of other drawing materials. For instance, marks made on textured or prepared paper will reproduce or highlight the texture of those supports. Or where a pencil may dent the support and produce a hard, edgy line, the crayon facilitates a smoky visual quality of the sort Leonardo spent years imparting to works like the “Mona Lisa.” (Conté invented his crayon in 1795; had he been 300 years earlier, it’s possible that far more of da Vinci’s lost works would still be around to enjoy.) 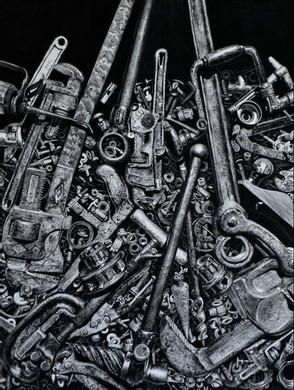 The thing to remember is that, just as a person may entertain a friend’s personal convictions without having to take them on as one’s own baggage, so an artist’s intentions are only as meaningful as the viewer may find them useful. They may serve as hints: a place to start, to orient oneself for an encounter that may well last a lifetime. For example, VanLeeuwen associates the superlatively detailed images of flowers and hand tools, in “Roses and Steel” and “Family Trades,” with his mother and father, which is knowledge that it may delight a fan or collector to share with fellow enthusiasts. But it’s a practice that can easily be overdone. Surely I’m not wrong if I associate the heavily-worn tools with a lifetime spent rooting through basements, abandoned workshops, and second-hand stores. The juxtaposition in “The Sweven Ring” (the title refers to a dream or vision) of a Neolithic stone circle with a view of the Milky Way could point to a very specific, albeit unproven connection between Stone Age monuments and Astronomy, or to two very long, but very different measures of time, or simply to a pleasant memory of a summer’s evening in Scotland. In fact, the artist drew it after hearing that there is supposed to be a spot in such a circle from which every — in this case, all thirteen — of the stones can be seen without any one’s blocking the view of any other.

Another example of the richness and duality Van Leeuwen instills into his images can be found in “Venus and Muninn.” Venus, a name from Roman mythology, was originally a Greek goddess, Aphrodite, whose king was Zeus. Muninn is the name of a raven from Old Norse mythology, whose name means “memory” and whose role was to assist Odin, whose role in Norse mythology closely resembles that of Zeus, the way angels often do for the various deities of many cultures. In other words, here are two aids to memory, standing together in mutual reinforcement: one in the form of an image carved from durable matter, the other a supernatural, but living being. Memories lack permanence, but permanent records alone cannot speak. 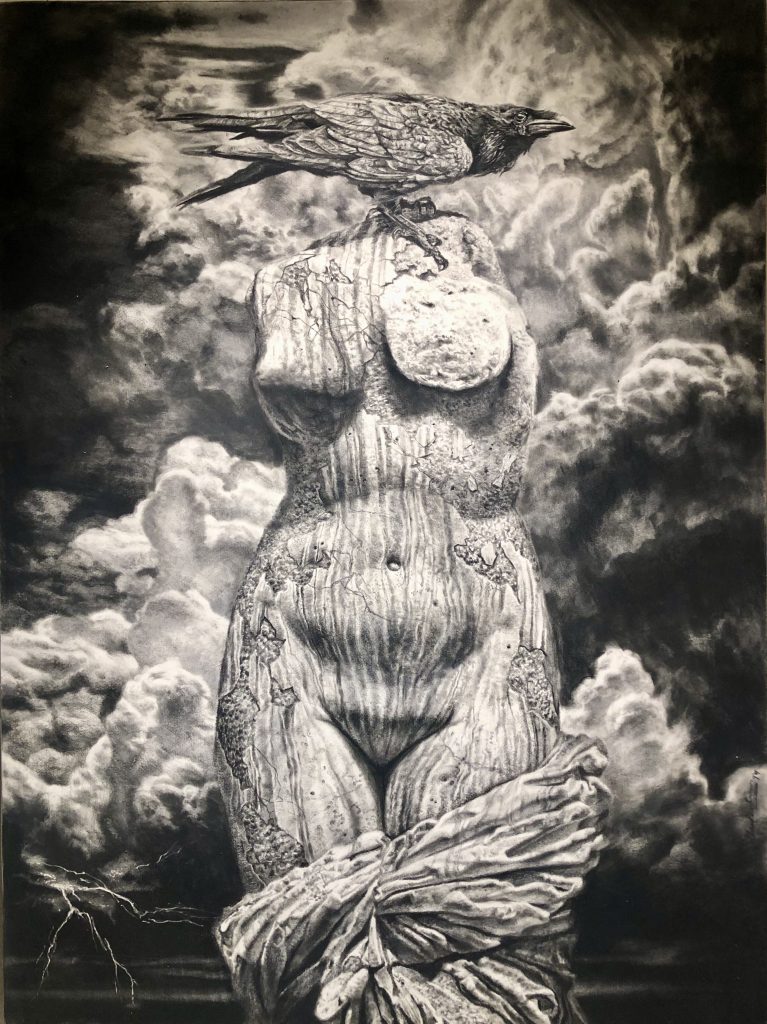 How important such matters are is entirely up to the individual viewer. No one should be prevented from enjoying a painting on account of unfamiliarity with the original purpose that caused it to be made. That would be like being forbidden to tap a foot or hum along to a beautiful tune unless one can identify it first. For this audience member, running my eye over a skilled Conté crayon representation of a stone is as sensuous as running my hand over the original rock. Other artists have used the medium very differently from Terrel VanLeeuwen, and I take each such use as it comes. That’s why art has facts, but no laws; the pleasure is in the eye of the beholder.