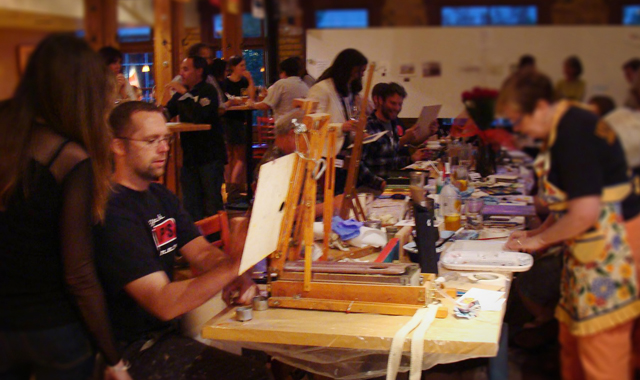 At the end of August, Sketch Sundays took over the top floor of Squatters Brew Pub in Salt Lake City. The brainchild of local art enthusiast Tim Lawlor, who discovered a similar program in San Francisco, and local artist Janell James, Sketch Sundays brings patrons and artists together in a casual, inviting atmosphere where art is created in front of the public and immediately put on sale.

On the fourth Sunday of the month, a dozen or so local artists are invited to create art around a central table at the pub, and to post it for sale immediately. Priced between $10 and $50, the works are kept purposefully accessible. Patrons can watch the artist work, talk with them, maybe buy them a drink (hint hint), and walk home with a piece of art that they may have seen created from start to finish.

“This is an excellent opportunity to start an art collection of works that would be difficult to purchase from a professional artist at this price point,” says James. “It is a fun opportunity to mix and mingle with artists, be a part of a different social scene, network, and be a part of the artist’s creative process.”

For the first Sketch Sunday on August 25th, thirteen invited artists took up their spaces around the tables set up in the middle of Squatter’s second floor. Identifying their spots by the name plates handcrafted by Lawlor’s children, the artists began working in pencil, charcoal and paint, tarps beneath their feet protecting the floor and plastic sheeting protecting the tables. Another half-dozen “drop-in” artists were welcomed and took up spots nearby. All were invited to post their finished work on a communal board while Squatters served up brews and pizzas to order.

“There was a sense of camaraderie amongst the artists and public alike despite the majority of us meeting for the first time,” says invited artists Jeffrey Hale. “I enjoyed the laid back nature of the event — it reminded me of what might have taken place one night in a pub in Montaparnasse. It was interesting to have a dialogue with the collectors after some silent circling of the artist’s center table.”

The crowd was a mix of the artists’ invitees, patrons attracted by the organizers’ pre-publicity, and the lucky visitors to the pub who in addition to grabbing their favorite brew had the chance of watching the artists and catching a “deal” on art. A talent scout from one of the local galleries even dropped by, asking some of the artists about their work.

Patrons were allowed to make offers even before the pieces made it to the display board, and some took advantage of the opportunity to “purchase” the work even when the artists was only in the initial stages.

Overall, Sketch Sundays’ inaugural night was a big success. The only noticeable hiccup — but one that will definitely need to be addressed — was the lighting: once the sun went down many artists found the overhead lighting insufficient and some even left early.