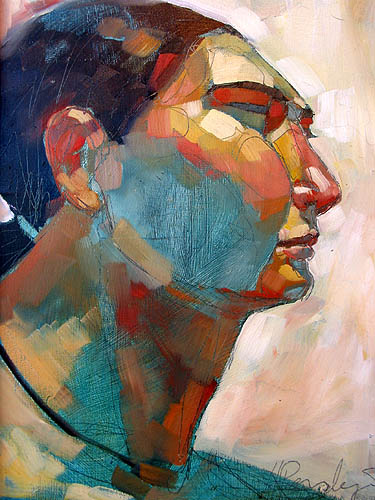 Many people suffer from cultural and ethnic prejudices and stereotyping to some degree. This is a recognized fact of life, and one that we have to deal with – often on a daily basis. When I first became aware of this social condition many years ago, I wondered why it had to be, and what I could do, personally, to help eradicate such poor-intentioned behavior. The answer was slowly revealed that first I had to rid myself of all prejudice.

Holly Mae Pendergast is a caring and compassionate artist who has also questioned why, and has sought to deal with the seeds of her prejudice first hand. The title of her new exhibit, currently on display at Art Access Gallery, “AN ARTIST’S SHIFT IN PERSPECTIVE: Portraits of Contemporary Native Americans in Utah,” references her self-analysis and the self-healing she worked to achieve through the process of completing this body of work.

As I stood and looked at the assemblage of paintings and drawings for the first time, Ruth Lubbers, Director of Art Access Gallery, told me, “This show is not about the Native Americans portrayed. The artist and her changing attitudes are the subject matter.” This statement intrigued me and I began to look at the works with fresh eyes.

Initially I thought I would be interested in the exhibit for what insights it could potentially reveal about Native Americans and their cultural, religious and philosophical beliefs. But when confronted with the works, I became interested in exploring the emotional and intellectual process the artist went through as she worked her self-transformation. 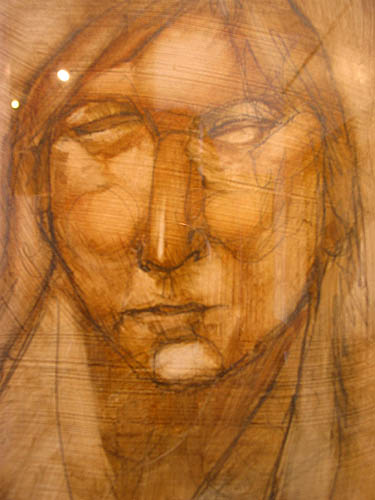 The first piece that really caught my attention was a small 9” x 12’ monochromatic study of a woman’s head. It was oil and graphite on prepared paper, beautifully rendered and very sensitive. It speaks volumes.

This study is rendered with soft brushwork and features graphite lines drawn on top of the painting, as do many of the other works. The subject — a mature woman — exhibits the beginnings of facial metamorphosis often associated with a hard life lived largely outdoors. The features of the face seem to have become modeled to match the landscape features they may be generally associated with. The forehead protrudes slightly and is rounded like a large sandstone bolder. The cheeks are softly faceted and contoured as if eroded by wind, sand and rain. The nose is sunburned, elongated and hooks slightly as if broken long ago. The lips are closed, offset, and the mouth is almost clenched. The eyes are closed and contorted, as if swollen shut. The hair looks roughly cut and the expression is one of sad determination and resolve.

The questions began to surface. Are these eyes the eyes of contemporary society, sore and swollen, closed to the social conditioning experienced during each person’s formative years? Are the modeled and contorted facial features representative of further learned behavior, reflecting the distorted values of society at large? Is the set of the jaw the determination to eradicate the roots of discrimination and prejudice from the artists’ own persona?

On a more superficial level, the expression could be representative of the suffering Native Americans have endured at the hands of their conquerors.

The accessibility of the works welcomes the viewer to ask their own questions, and find their own answers.

“People seem to be really attracted to this work, even people without formal art appreciation training,” confides Lubbers. “There is something about Holly’s style that is very comfortable and familiar”.

Lubbers points out the rendering of the hands in the larger paintings. “They are so strong and animated as if they have a life of their own. Almost spider like.” 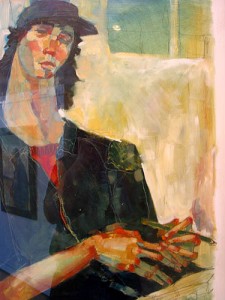 I, too, had noticed the rendering of the hands, as in the piece “Lance Bullcreek”. Enlarged and with elongated fingers. Not at rest. Agitated, even in waiting. Strong, yet delicate. They could be analogous to the artist’s hands, strengthened by working the particular muscles used to paint and draw, waiting and ready for the next task and artistic challenge.

In her artist statement, Pendergast retells her experience of seeing a troupe of Native American performers dressed in T-shirts, jeans and sneakers, and her friend’s remarks about their dress not being authentic looking costuming. “They are wearing authentic Indian clothes,” Pendergast answered. Indeed, T-shirts, jeans and sneakers are what native people wear these days, the world over. 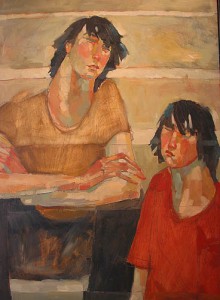 Another striking aspect of Pendergast’s paintings is how many of the subjects do not “look’ like Native Americans. Pendergast has specifically chosen these subjects to call attention to the stereotyping often associated with prejudice and has created another graphic analogy between herself, Native Americans and the universality of the human experience. “This could be anyone’s grandmother,” Lubbers points out. “Or these kids on the steps look like the typical kids next door.”

There are, however, several portraits of very ethnic looking subjects, wearing more traditional clothing, such as “Corbin Harney – Spiritual Leader” and “Lisa Bullcreek and Ty.” Pendergast explains, “This is because they participate in traditional activities as a normal aspect of their lives”.

The attentive viewer becomes entranced by the calmness and inner peace expressed in these works. An almost meditative quality expressive of an inner reserve and a quiet dignity exudes from the paint, as if the artist has captured actual spiritual auras. There is emotion expressed here. It appears to be a combination of the humble acceptance of forced social position and accompanying resignation, with the Native American tradition of an innate humbleness before the mystery and magnitude of creation.

The artist’s style is conducive to the overall presentation of the subjects and adds to the ambience and aesthetic experience. Her use of raw, largely un-mixed colors, straight from the tube, are expressive of Native peoples connection with the environment. The choice of earth tones, turquoise, blue and red lend to the feeling of authenticity of the subjects. Her painterly style and broad brush strokes provide power and animate the surfaces. The contorted body shapes and thickened and elongated forms lend an alien quality to the figures. Indeed, Native Americans remain a largely alien sub-culture and almost a “secret” society.

Pendergast has committed herself to learning about these individuals and what they contribute to society. They are elders and leaders, healers, teachers, politicians, bakers, activists, teenagers, mothers, and children. Learning about them and coming to appreciate them for their personality, character and morality is part of the process of opening her mind and growing a new “seed” of understanding within her heart.

The subjects have been Pendergast’s teachers, and Pendergast is now the viewer’s teacher.

In a time of globalization, Holly Mae Pendergast’s exhibit at Art Access Gallery provides a wonderful opportunity for the viewer to explore their hearts and minds in regards to their preconceptions of ethnic groups different from their own. Pendergast does not preach with her paintings, but takes her own journey through them and allows the viewer to follow along. May we all be blessed in our efforts to become planters of new seeds.