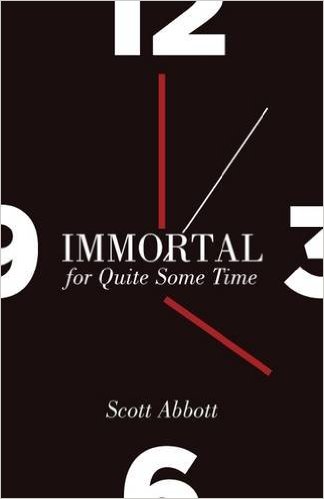 15 Bytes is pleased to announce the winner of the 2017 15 Bytes Book Award for Creative Nonfiction:  Scott Abbott’s Immortal for Quite Some Time, not a memoir but “a fraternal meditation on the question, ‘Are we friends, my brother?’’”

The book opens in 1991, as Abbott, his sisters, and their mother travel to Boise to retrieve the body of Abbot’s younger brother, John, who has died of AIDS. Though the devout Mormon family disdained John’s homosexuality, they have tried to keep him close, preferring to know less, hoping he’d change. Immortal opens with the terrible unearthing of John’s immediate past, a landscape of suffering and isolation littered with evidence of John’s illness. Beer cans, too. But the family also hears anecdotes about his generosity, all these details sketching an ambiguous map of John’s drift toward independence from family, faith, and the institution that rejected him, yet considered him savable.

15 Bytes’ review of the book by Brooke Williams calls Immortal“the world’s most perfect obituary” in part because of the “frustrating communique full of carefully crafted clues to a much larger story, intended to help those still living,” the part of an obituary that Williams calls “the treasure hunt.”

In this haunting treasure hunt, the author and his brother’s salvation would require obedience, the sublimation of sexual and intellectual questioning. What’s unknown about John’s pain and pleasures troubles Scott and his relations with his family, his colleagues at Brigham Young University, and the Mormon leadership. Immortal patiently sifts through past and present conflicts—some violent, others slow-burning—intertwining the brothers’ journals, Scott’s memories, dreams, and speculation touching John’s ephemeral sketches and poetry, his questions and recipes. To be John’s friend, to recover (not rehabilitate) him, to find John in himself, Scott necessarily turns the question “are we friends?” on those around him, setting up a deeply moving struggle toward peace and independence in the brutal light of honesty and love.

You can read the full 15 Bytes review of the work here.

Immortal for Quite Some Time (University of Utah Press, 2016) is one of three books of creative nonfiction that were finalists for the 5th Annual 15 Bytes Book Award, the winner of which receives a modest cash prize. This is the first year that 15 Bytes has included creative nonfiction as a category. Finalists Kevin Holdsworth (Good Water, University Press of Colorado) and Patrick Madden (Sublime Physick, University of Nebraska Press) will appear in Salt Lake City with Abbott November 14, 2017, (7 p.m.) at an honorary reading and celebration at Weller Book Works in Trolley Square. You can read citations of the winning book and the two finalists here.

Congratulations to Scott Abbott, winner of the 2017 15 Bytes Book Award in Creative Nonfiction for his Immortal for Quite Some Time!


Director of the Program in Integrated Studies and former chair of the department of Humanities and Philosophy at Utah Valley University, Orem, Scott Abbott will lecture from his most recent book-in-progress, Standing as Metaphor: Homo erectus in the Culture of Homo sapiens at Weller Book Works’ Book and Bridges Series today, Sept. 26, 2017, at 6:30 p.m. in Salt Lake City as part of the weeks-long, statewide Utah Humanities Book Festival.

In this video by UVU, Abbott talks about his work as a teacher.