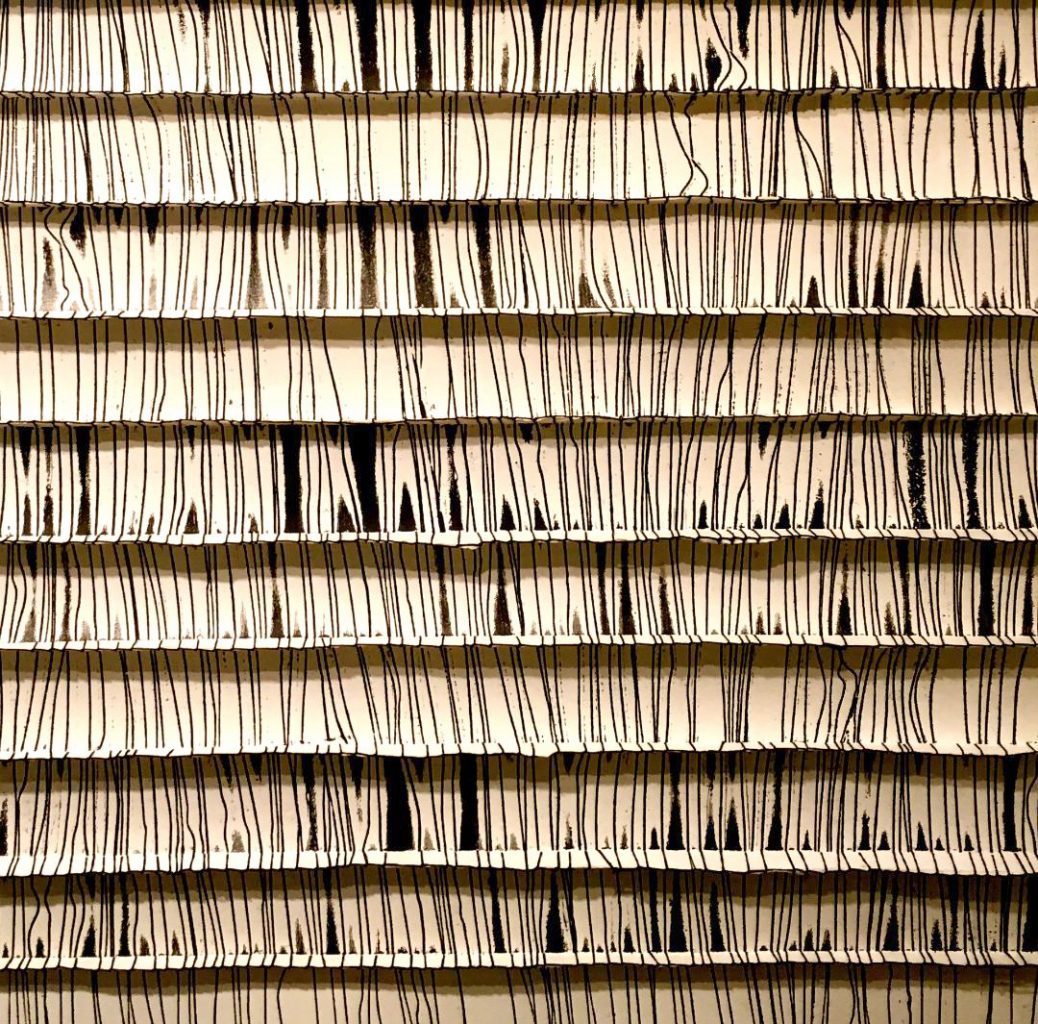 What are prints? In a way, they’re coinage: capable of being drawn, or pulled, as printmakers say, from a belabored crucially important original art surface, in potentially endless number.

Unlike coins, a print has a stated and limited run.

And a good printmaker does an almost horrific thing — eventually (preferably fairly quickly so there is no turning back) destroying the original mold, or matrix. “14/15” scrawled at the bottom of that print says it is fourteenth of only fifteen possible prints. Horrific, if you believe that the worked area which the print is drawn from is the true-art native home, or lodestone, of the work: those incised marks in wood, or copper, or drawings in grease crayon on stone, are the precious seed, the mother-crown from which copies are made, prints its salable derivative, that sale price increased by the limitedness of the run of prints, the destruction of its source. 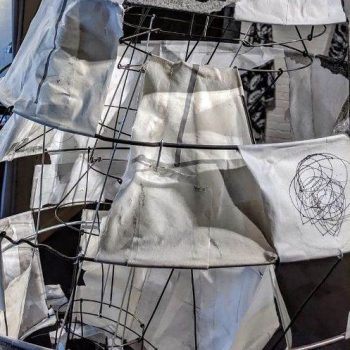 It is perhaps helpful for the artist to move on to another project, as an explorer would less want to return if a dock he had carefully built was now in ruins. He’d build a new dock elsewhere.

Poiesis, an exhibition at Art Access set up for The Rocky Mountain Print Alliance symposium coming to Salt Lake City in October, features works which have leapt to something three-dimensional from something flat and two-dimensional (Poiesis meaning changing to something else). And there’s a whole bunch of dock-building going on here, explorations of what you can do with a print: look at Ike Bushman’s “Spiritism I” and “Spiritism II,” mobiles that appear almost like ships in the air, made from Bushman’s lithographs on Japanese paper, formed and joined by wire. Or Chinn Wang’s “Album” pieces, which are like surprise windows, as Amber Heaton’s tangerine and raspberry woodcut squares of “Spirtum” are like very bold floor tiles.

Kathryn Maxwell’s “Unraveling the Secrets,” made up of 180 spools of vivid, heavy twine unraveling, seems symbolic more of printmakers getting to work than the suggested unrolling of secrets. It speaks to the need of artists, printmakers, to do the endless work they do, beginning again and again, setting out for uncharted territory, perennially, industriously, making things; and, increasingly, of using many-colored materials. 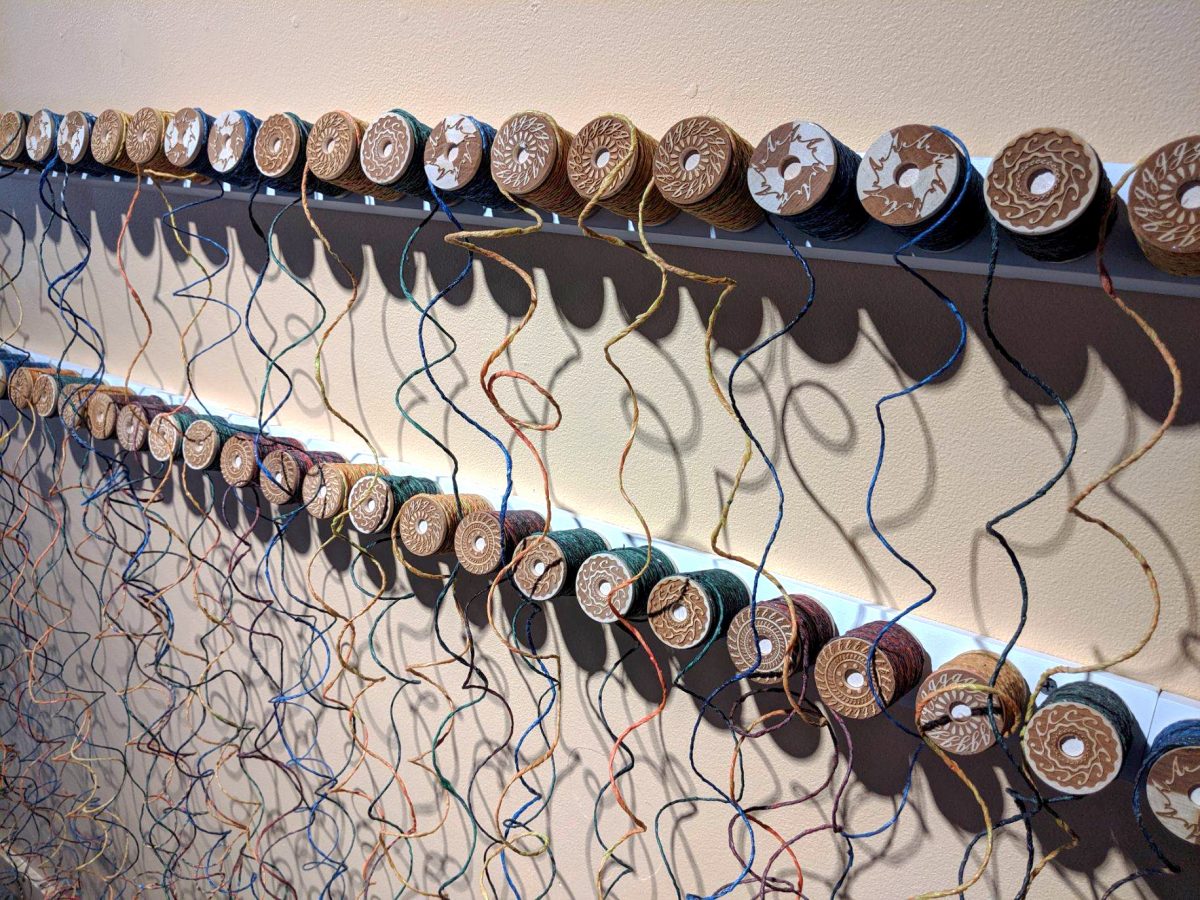 Printing has taken off to a new realm of possibilities; the centuries of mostly black ink on heavy white or cream-colored paper are long gone. Most richly colored of all here is Paula Wilson’s “In the Desert Mooning,” a huge piece curved inward like a ship’s scroll-sail. It’s tantalizingly hybrid; made from prints, yet, a drawing or a painting of a carpet, with painted tasseled fringe at top and bottom. In a collection of three-dimensional printwork, expect lots of types of prints — this one’s “collagraph on muslin with inkjet on silk, mounted on canvas and wood.” 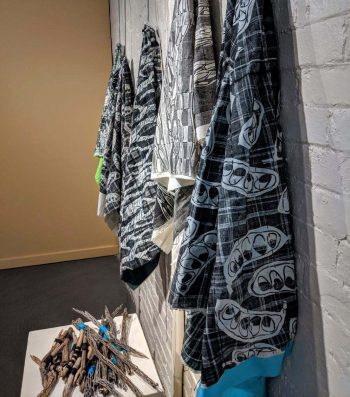 Stefanie Dykes, “Preparing for the Apocatastasis … I didn’t say I was ready,” collagraph prints of muslin fabric with thread

There’s still a lot of serious black and white and gray here (the argument could be made, as with photographs, or movies, that any color print which is good would also be just as good and admirable, or more so, in black and white). The blankets casually hung from hooks in Stefanie Dykes’ “Preparing for the Apocatastis” are black and white and gray collagraphs (though a few have blue or green underlinings). Brenda Mallory’s “Rifts #4,” framed strips of collagraphs stitched by thread, looks almost like carefully pleated birch bark, all black and white and cream; and Ike Bushman’s ships-in-the-sky mobiles are cream and black and gray. Also strictly black and white is Camilla Taylor’s “The Soil” piece — a quilt, laid over a stand like a tablecloth, made of delicate intaglio-printed ghostish-gray and white and soot-black fabric. Much of modern art is window-dressing; here, for effect, one black ceramic hollow cast of a man’s lone right hand rests on top of that quiet quilt.

That ceramic hand suddenly, bravely displayed here — on the very somber quilt — is proof of the art-installation quality of surprise now richly possible in a display of prints, if they have, as these have, through their makers’ efforts, through poisesis, made the leap to three-dimensional. Work like this has self-incorporated, too, by its own hand, what an art show really needs to be truly good: not just flat work, but full-round, or three-dimensional work, also. Three-dimensional and flat enhance the magic of each other, just as onions and garlic make meat taste good. 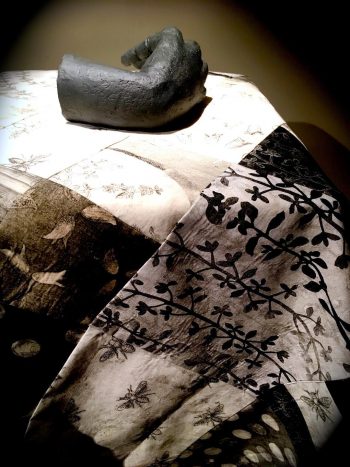 Which brings us back to that quandary of the tragically-gone three-dimensional beauty of those hand-carved woodblock or linoleum-block sources for prints; those labor-intent collections of marks of all types in the copper or tin or aluminum; the stones which were grease-pencilled to launch the lithographs. How beautiful they would be, framed and kept, instead of destroyed and thus lost. How many were sacrificed, destroyed, through centuries. To increase the cost of a print? To satisfy the buyer? Over time, the triumphant survivor would be the original, but it’s a land which can’t be returned to. You can’t go home again.

You can make a little trip to an imaginary island, though, walking around Joey Behrens’ “you are not a tree but a vine” and “between earth and sky/a device for meditation.” Made from cyanotypes and monotypes, they are a blue that’s not sky-blue or sea-blue. They’re the blue that’s the stuff of dreams, a tincture, almost, from the glass of blue medicine-bottles. All on one tabletop beneath bright lights, the smallest element looks like a tiny valiant sail-ship heading across the water to the larger uprisen 3-D island continent ahead. Which, lo and behold, is populated and architectural (if you prefer to see it that way, even with a Sydney Opera House). Or, if you prefer, those robust swells which look almost like the giant upthrust ribs of the Sydney opera house are just robust landscape, full of the dramatic dips of mountains and valleys. 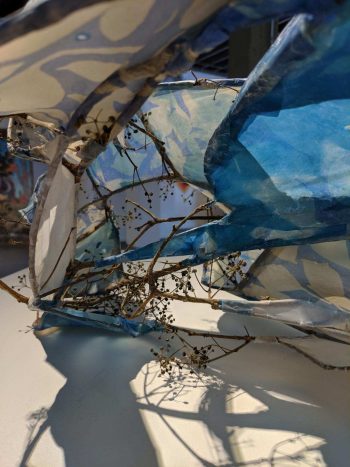 It’s all made from prints; this is all good for meditation as you can travel to the island continent via the little print-boat, or, in reverse, you can dream of traveling away from the island continent by looking out at the little print-boat. This print-island-continent might be a sort of Australia, long before or long after a soul lived there, one bright day in its happiest harbor. Pre-colonial or post-colonial. It’s an old little-boy’s reverie: the paper hat, the paper boat, the lake. On that blue island of your dreams why, you’ll even make the coins, with your name signing all of them. You’ll run the bank. It’s for the best recurring meditation possible: you’re imagining that country or kingdom is yours. You’ll rule.