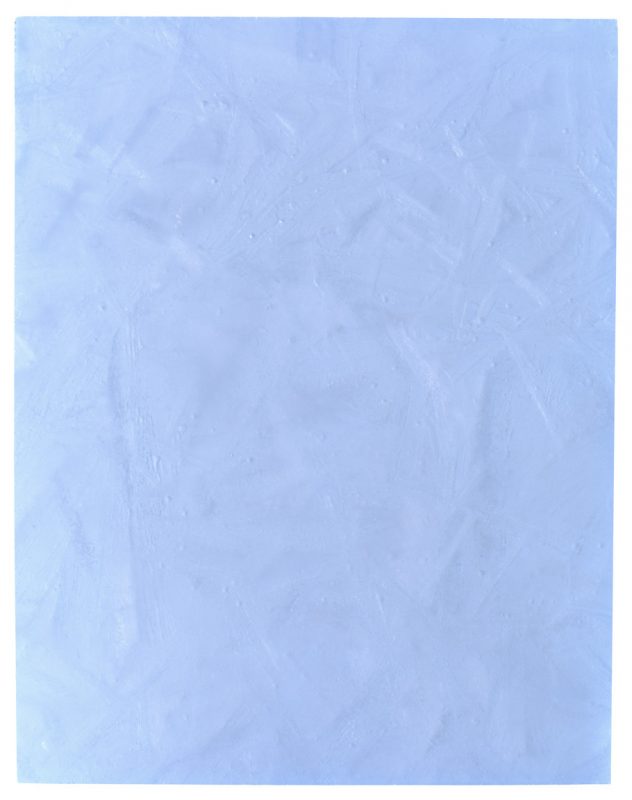 In the winter of 2013, Paul Crow encountered northeastern Utah’s East Canyon Reservoir as a solid sheet of ice. It had frozen over the course of two days without any snowfall to become a completely smooth, deep blue sheath. “It was this weird thing because you never see ice freeze that way,” says Crow. “Most reservoirs freeze in pieces and you get those shapes, but this was frozen solid into an absolutely flat surface.”

This natural encounter was one of Crow’s early inspirations for a conceptual photography project in which he has captured over 70 unique images of ice, each sheet frozen and photographed in his then Salt Lake City studio. Crow, who now lives in Ogden, where he is an art professor at Weber State University, presents eight of these images for On Ice, an exhibition presented by Ogden First (O1ARTS) that comments on the effects of global climate change. The show represents some of the final photographs from Crow’s project, which evolved over two consecutive winters from 2013 to 2014. During that time, Crow experimented with everything from lighting techniques to the thickness of his manmade ice sheets in order to bring out the subtle textures and essence of ice through the process of film photography.

Even though he avoided strict rules or contrived results, Crow eventually set up a controlled environment for his project that became habitual. He froze two trays of water each night and shot the ice sheets the next day in exactly the same way with his 4 x 5 color film camera. Crow built a stand to hold each delicate piece of ice (each one about a centimeter thick for translucency) to achieve optimal sunlight through the windows and skylights in his studio. His camera was set up on a tripod whose placement was marked by a piece of tape stuck to the floor. Crow didn’t shoot at the same time every day, but did use a light meter to find the necessary amount of sunlight for correct exposure. It was the uncontrolled variables in Crow’s process, however, that the artist relied on for the project’s resulting aesthetic. The quality of his tap water each day and the length of time it was allowed to freeze, the movement of natural light in the studio, and the unexpected nuances of film photographs, led to what the artist referred to as “a nice difference within the structure of sameness.” Shape, size and an overall powder-blue color is consistent across his final rectangular images, yet each one offers a disparate view of ice as a captured moment in time — or more specifically 24 hours in Crow’s freezer. The ice responded to its environment with textural differences; swaths of white light emulate wide brush strokes in some pieces, while tiny beads of trapped air populate others. The details unique to each piece reveal the variability of nature, which Crow was unable to manipulate through his process.

Crow’s intensive project had him physically examining ice for months, which soon led to more metaphorical observations on his subject. Slowly formed yet easily broken, radiant with the touch of sunlight yet killed by its heat, ice became a source of contemplation for Crow, whose photography and installation art conceptually explore human perception and experience. According to Crow’s artist statement for the show, the first aerial images of polar ice were taken the same month and year he was born, in 1964. Arctic ice coverage has since fallen by half and what remains is significantly thinner than what was photographed by the first Nimbus satellite in the ‘60s. The unbroken ice that Crow witnessed on East Canyon Reservoir and then created in his studio are only miniscule versions of true “ice sheets,” which are defined as masses of glacier ice extending more than 50,000 square kilometers (20,000 square miles.) In his statement Crow points out that the only true ice sheets left on earth exist in Greenland and Antarctica, and the latter shrinks by 100 cubic kilometers each year. Crow’s ice images are literal snapshots of a 24-hour existence while the ancient ice sheets he refers to hold million-year-old gases, dust and water molecules within their freeze, and are released as layers continue to break off and melt. Radiance from the ice is also lost through this process. Crow explains that albedo – Latin for “whiteness” – is the measure of the reflectivity of a surface. When it comes to our planet, it’s the amount of solar radiation we reflect into outer space. “As we lose ice from the earth’s surface, we reflect less light back into space,” Crow states in the final words of his statement. “We become dimmer. We absorb heat, as ice dies into water.”

Crow’s last sentence might sound dramatic, but its harsh truth echoes in our mind as we view his photographs. Like the images from the Nimbus satellites, each one documents a frozen moment in time and represents an ephemeral existence.