Outside & Inside the Sculptural Art of Installation 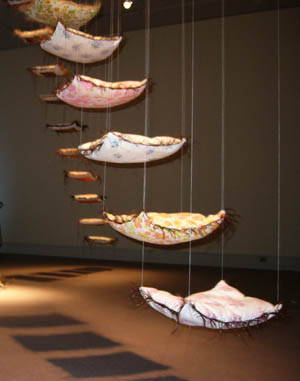 Installation as an art form is a Wagnerian sculptural experience. Light, sound, color, movement, and — most importantly — space combine to create a visceral sculptural experience. In a world of strip malls and strip housing, the ephemeral quality of installation is the perfect sculpture for our times. The permanency of a Gothic cathedral has nothing to do with our consumer society, where an object becomes an antique in thirty years and houses are torn down every generation or so.

Sculpture has always been about space. In the Western tradition, sculpture began as reliefs, and later, freestanding sculptures placed in a niche in a cathedral. With Donatello’s David sculptural forms were liberated and put on their own. Though sculpture became movable, it was still certainly influenced by its space.  Michelangelo’s David has a far different effect at the end of the hall in the Galleria della Accademia than it does in its original setting in the Piazza dei Signori (where a replica now stands).

Installation as a form of sculpture takes the importance of place and location to a whole new level. The space itself becomes a sculpture. An installation makes a participant conscious of the entire space around him and of his being in that space. It is like walking in a slot canyon in Southern Utah. One becomes aware of the physicality of everything around oneself.

Brigham Young University’s Museum of Art explores space and installation in an exciting forum in their ongoing exhibition Outside Inside: Fragments of Space. For this exhibit, seven Australian artists were invited to create commissioned installations examining “the extended community that has gathered along the Wasatch Front.”

The resulting installations range from observations of social interactions and historical relationships to an intense use of Utah’s unique landscape as metaphor for spirituality and search for meaning. Each makes use of the space the installation inhabits, some more successfully than others. The most successful of them take the viewer into a space and make it a reality for them. 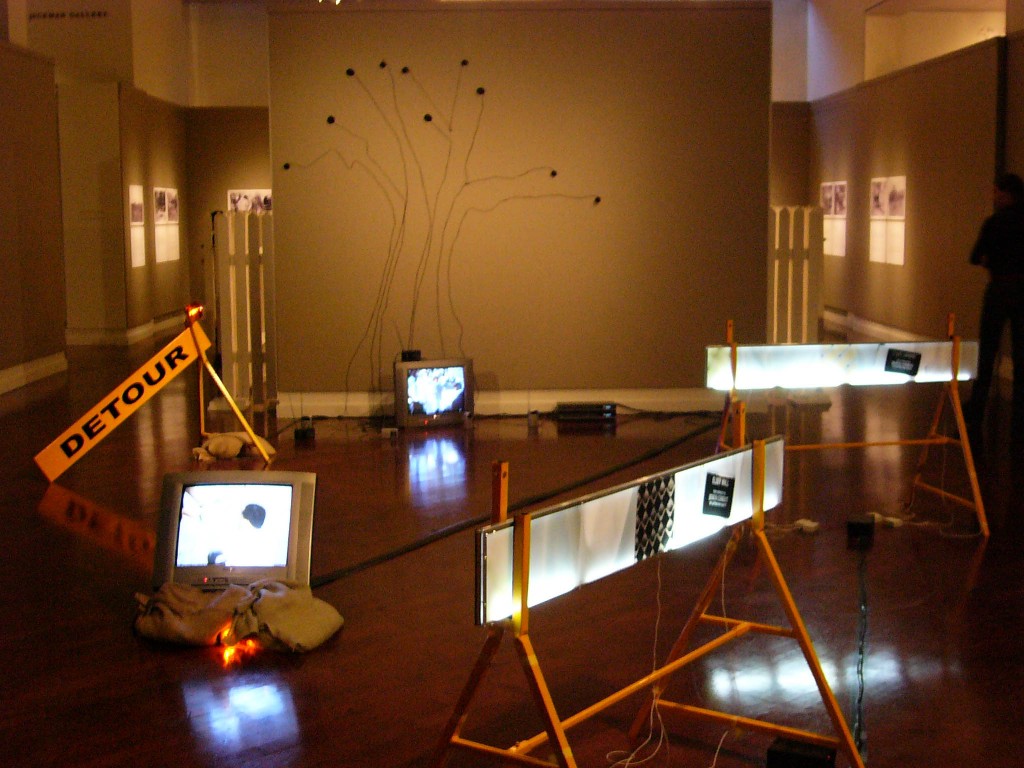 Such is the case with the first installation one encounters when entering the exhibition – “Just Keep Walking.” Street barricades and street signs define the space: blocking access, establishing empty spaces, and directing the participant. In addition, the artist, Josie Cavallaro, has placed monitors showing video footage of Mormon missionaries operating in Sydney Australia’s civic spaces. Young men — in requisite white shirt, tie and name tag — attempt to approach people in two very different places: Martin Place, the city’s hub for commercial activity, and Hyde Park. In Martin Place the missionaries seem like another barricade or warning sign, to be avoided or stepped around. In Hyde Park the video reveals a more accepting audience, where the missionaries are able to sit down and discuss their message. Cavallaro makes an interesting choice by avoiding the locale of the Wasatch Front and instead concentrating on one of its most famous exports.

Separated by a partition from Cavallaro’s installation, Anne Graham’s creation shares the main hall of the exhibition. In her installation, the walls are lined with photographs of pioneer women tending to livestock and descriptions of their activities. A white-picket fence enclosing two large pod-like objects delineates the main portion of the space. The pods seem an unsettling juxtaposition to the domestic thoughts conjured by the fence. In addition, the space feels cramped — the polar opposite of the open plains of pioneer women. Reliance on photographs and descriptions of the women’s lives seems more like a history exhibit, without necessarily creating the “feel” of a history exhibit. On a whole, the installation doesn’t seem to have the same experiential effect that some of the other artists were able to accomplish.

Julie Gough’s “Transmutation” is exceptionally successful in using its space to create an experience, though she admittedly makes the least obvious reference to the task at hand: the communities of the Wasatch Front. Gough has used the room at her disposal to create a surrealistic theatre set. Upon first entering the room, the viewer is confronted by thirty-three pillows, hovering in the dark room, a warm glow of light shining from above. In a back corner, a hospital bed, with heart monitor is only barely visible. However, the light of the room brings one’s attention to the pillows. The gravity of the darkened hospital bed is juxtaposed against the airy quality of the floating pillows. The viewer is walking in between the spaces created by the conflux of two worlds. The mortal world of the hospital bed is faint and diminishing compared to the well-lit pillows.

Only when a viewer actually inspects the bed do they realize there is a second monitor, turned away from the entrance to the room. This monitor shows a dream-like sequence of a young girl running through a forest. Gough has created a space, a sensation. She has made the viewer a member of the stage set. One feels like a ghost or member of a spiritual world floating around the set of a “mortal“ experience. Though arguably the most compelling of the installations, Gough’s installation loses some impact by making no recognizable reference to the peculiar aspect of the communities of the Wasatch Front.

The other artists in Outside Inside interact more directly with the actual physical quality of the Wasatch Front and attempt to bring portions of this physicality to bear in their installations. Noelene Lucas’s installation, “Coming and Going,” uses the Utah landscape as a launching pad to explore more intellectual and spiritual pursuits. Lucas’ room is dark and empty, except for two video screens, facing opposite each other. A large screen on the left wall shows a video of the Salt Flats, the broad expanse of white interrupted only slightly be the passing of a distant car. On the smaller screen, a hand moves a feather across a layer of salt, slowly, almost imperceptibly, revealing a grid. This small, subtle image, with its reference to salt and erosion, does more to reveal the nature of much of the Utah landscape than might a thousand paragraphs. The grid revealed by the movement of the feather is actually a family history chart, revealing the artist’s own search for her ancestors. 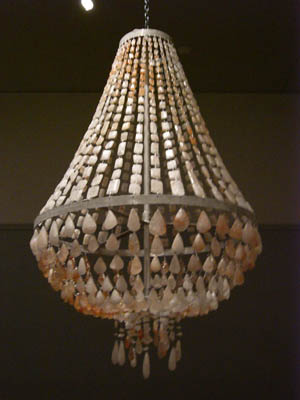 Salt is also an important element in the installation by Regina Walter, which consists of a single chandelier, suspended in a darkened room. Made from natural, carved and solution-formed salt crystals, the chandelier sparkles in a ghostly light reminiscent of Gough’s space. Created in a traditional form, the chandelier is recalls nineteenth-century life – which formed the Wasatch Front communities. The subjects of the installation, light and salt, are both important symbolic elements for the religious communities that have made their home along the Wasatch Front.

A less compelling reference to the physical quality of the Wasatch Front is Bonita Ely’s installation entitled “Bonsai Landscape.” The artist has taken a photograph of part of Y Mountain in Provo and reproduced it over and over as a paper bonsai tree. These trees are multiplied and spread across the ground. Ely’s changing of scope — bringing a monumental mountainside down to a paper cut-out repeated across the floor — is an interesting idea but the space she has created fails to give the participant a sense of “being in something.”

Jacqueline Clayton’s “Ark” does not so much create a space as recreate on in a new context. The most compelling aspect of her installation is a series of glassed-in objects on raised pedestals. Like ancient Ming vases in the Metropolitan or a delicately preserved dress in the Daughters of the Utah Pioneers, these objects are given unique status. The objects, however, are items Clayton found in her mother’s home. She has created a faux museum experience to, elevating the objects and the stories they tell. Each vitrine contains a scale holding simple objects such as a watch or plates or a book. These, placards tell us, are the amount of worldly possessions pioneers, refugees and immigrants were able to take on their journeys. In one sense, the artist identifies the refugees by their objects. But the nature of their lives is revealed by the paucity of objects. The objects celebrate the lack of objects and point to the more essential qualities of existence: family, freedom, life, love. If Clayton has created a theatre set it is for a morality play, her installation a testimony to one of the most important aspects of our lives – our choices. Clayton tells us how much a Mormon Pioneer would take on their voyage across the plains, or a British immigrant to Australia. These stories of migration are tied to more contemporary choices as well, like the refugees and asylum seekers of our age who are faced with similar choices. The most poignant moment in the experience of Clayton’s “Ark” is an empty vitrine, assigned to Afghan refugees. It is accompanied by a quote “We left with nothing. Just our lives. It is enough.”

Leaving this exhibition, a museumgoer leaves with much more than the available postcards describing each artist’s work and the thoughts behind their ideas. The seven artists who participated in Brigham Young University’s Museum of Art Outside Inside have adeptly demonstrated both the vitality and the versatility of Installation as an art form. At their best they have created unique stage sets for realities that make the viewers active participants of an experience.

This article originally appeared in the February 2004 edition of 15 Bytes.