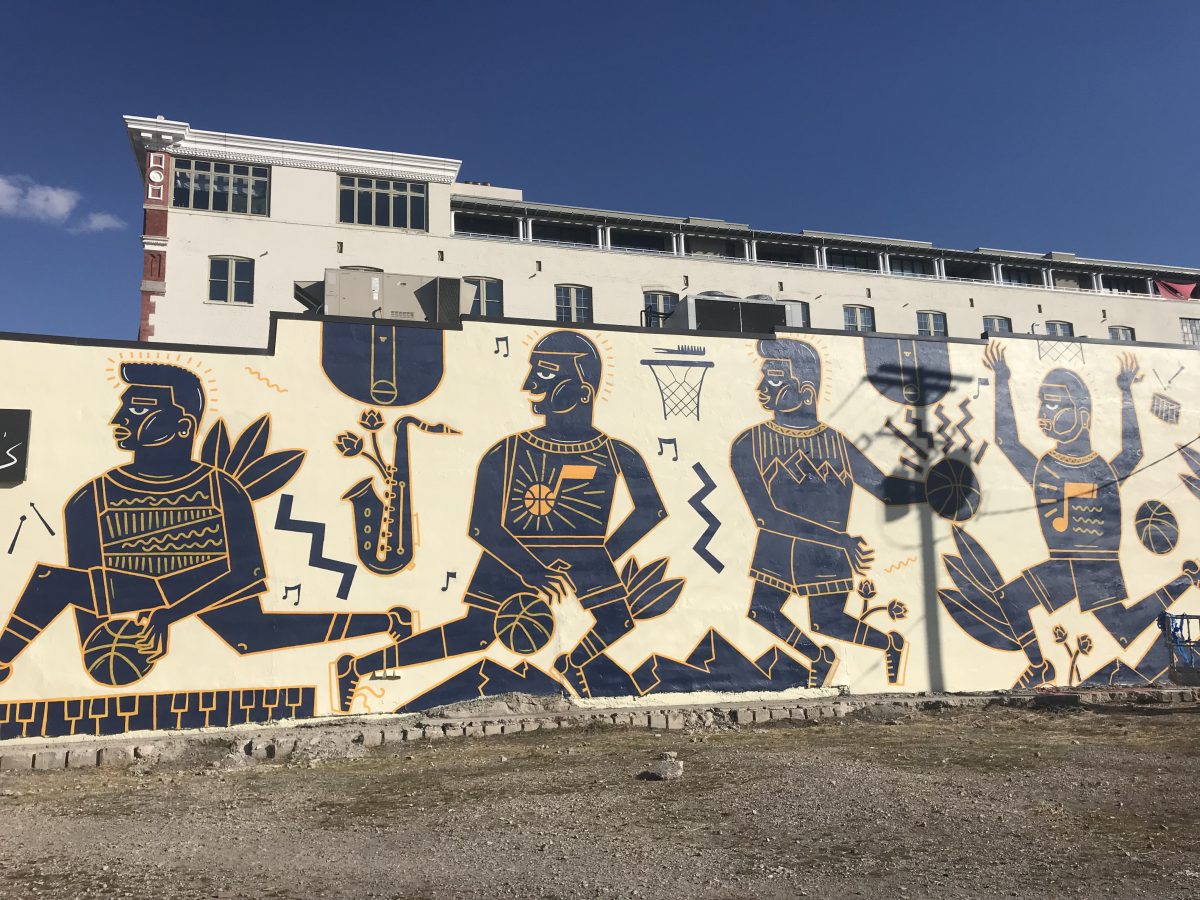 This isn’t likely to go over well.

Sure, we took the team from New Orleans, a town with which we have little in common, and we couldn’t be bothered to change the name to something more Rocky Mountain-appropriate, but the Utah Jazz are definitely a local thing. Something most Utahns can agree on and get excited about. Even more than redrock weekends and powder-day absenteeism, it’s part of our local identity. So, when the Jazz decided to commission a mural celebrating the team, you might think they would have looked for a local. You know, a fan.

Karabo Poppy had never been to Utah when her plane touched down in October to begin work on the Jazz mural, which appears on the west side of Valter’s Osteria in downtown Salt Lake City. The South African illustrator and street artist has worked with big names like Nike and Calvin Klein, but in a video interview that appears on the team’s website she says she hadn’t even heard of the Jazz two years ago. Street murals are “a big fad,” as one practitioner of the form commented recently (when met outside a local grocery store). They’ve become official, commissioned things and they are going up everywhere (a dozen or more in Salt Lake City over the past half year) and artists across the world are developing growing portfolios for their works on multiple continents, traveling across time zones to help in what municipalities like to call “place making.”

Poppy met with players on the team to finalize her designs before going to work on the 20-by-78-foot mural. The design is infused with the sense of hybridity she likes to bring to all her work, she says, and she certainly brings her own vibe to her celebration of the Jazz — she blends a nod to the team’s past (a saxophone) and its present (our stupendous mountains) with stylized figures reminiscent of the hand-painted barbershop signs in the small mining town she grew up in. No doubt about it, it looks good — eye-popping enough that one hopes the eyesore of a lot it faces stays empty for a little while longer.

Yet one can’t help but feel there is something a little off. As one local commented when we posted an image of the mural to Instagram: “Nice, but Utah artists should be represented on our mural walls.”

We don’t need to have all art in our state made by locals. We should avoid, at all costs, parochialism or protectionism. El Mac and Retna’s “Ave Maria” mural on the Guthrie building is fabulous and has — deservedly — become a local landmark. And Steven Labrum makes a decent argument for hiring an Australian to create the mural on the side of the Impact Hub building. Globalism enriches our lives wonderfully. But localism isn’t a bad thing, either. This, after all, is a unique situation, isn’t it?

As our identities become more individualized in the modern world, sports teams, for good or bad, have become foci for our innate need for group identity. This can be unifying (the Utah Jazz) or divisive (that blue/red divide at the point of the mountain), but it seems obvious that sports teams are not simply a business. To whom, exactly, does the Utah Jazz belong? Not on paper, but in spirit? To the players, who may be traded in a week’s time, or decide to retire mid-game? To the owners, free to alter a city’s makeup by pulling up stakes once a larger market offers a better stadium? Or to the fans, who cheer year after year for a team no matter how many championships they may miss?

This mural is good, but it suggests the answer is not the latter. The Jazz had plenty of artists to choose from right here, as demonstrated by the recently completed murals in the Granary district. And one or more of them is likely a fan. So, what gives? Maybe someone in corporate was afraid Trent Call would put googly eyes on Rudy Gobert? Was the Boost Mobile sponsorship Chuck Landvatter received for his Juxtapoz mural not blue chip enough? Does he need to get some Adidas stripes on his CV to contend for something like this? Consultants and bureaucrats like to sit around long tables and throw around buzzwords like “placemaking” as they decide the future of a neighborhood, city or state. But let’s remember, place is not a blank slate. It is a location, but it’s also the people that inhabit it.  And the people in this place have talent. Let’s give them the walls to prove it.

The Jazz mural is located on the west side of Valter’s Osteria, 173 Broadway, Salt Lake City.