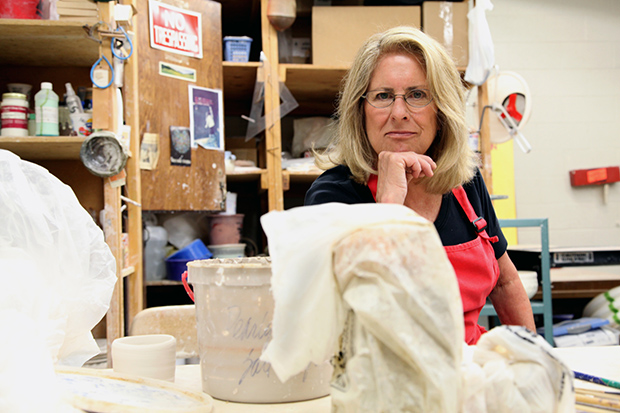 It’s a common trope, the artist who tells you they began their career at an early age, attracting the accolade of adults when they were still preschoolers, or executing their first masterpiece on the dining room wall, to the—slightly proud—dismay of their parents. There was no such beginning for Susan Harris, professor of ceramics at Southern Utah University, who came to her craft well into adulthood. In fact, had it not been for a genetic mutation passed on by her Dutch ancestors, Harris might never even have touched clay.

Harris spent her early years as an Air Force brat, but her family eventually settled on Long Island, where her childhood was steeped in music. “It was my passion. And I was good at it,” she says, her New York roots evident in her matter-of-fact manner and the nasal tones of her speech. The flute was her instrument and she was good at it, good enough to go to Indiana University on a full music scholarship. But in her sophomore year at IU she began having trouble hearing. After repeated visits to specialists, she was told her hearing loss was hereditary, and that it would be progressive, complete, and inevitable: a rude awakening from the dream she had pursued since she was 8.

Stunned, Harris searched for alternatives. “I had done some anthropology and archeology classes, and was interested in the field, so I concentrated on that.” In her final year she shifted to the University of Illinois, where her husband, a sociologist, went for graduate work. After over 200 credit hours — “you can never have too many college credits,” she quips — she graduated with a double major (Latin American Studies/Anthropology) and a double minor (Ethnomusicology/Music). “So I had a lot of stuff that I wasn’t particularly good at.” 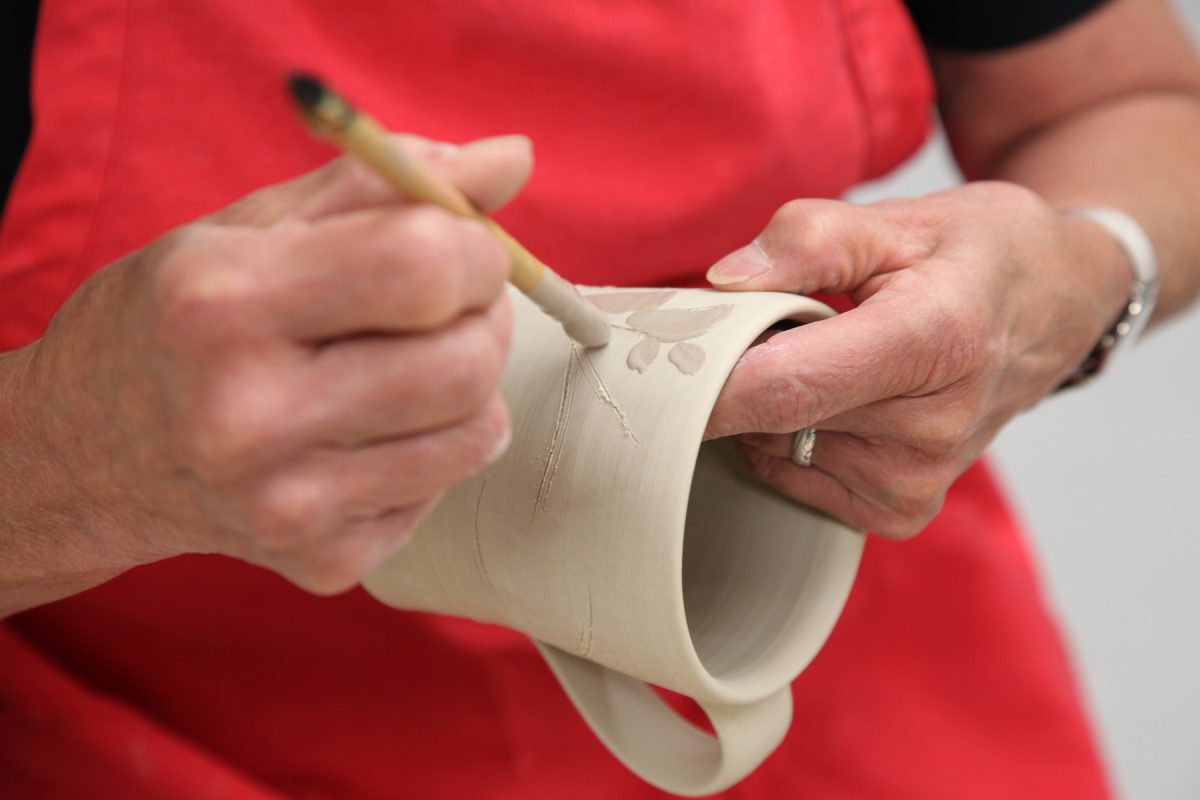 It was when she turned to anthropology that Harris discovered clay. “I wanted to learn how they made these things I was studying,” she says. “There was a hobby center at IU and I went there and learned how to make pots.” When her husband was offered a teaching position at Utah State University and the family (two children, ages 1 and 2) moved to Logan, she continued taking night classes in ceramics. “I realized that’s where I belonged.”

She also realized her marriage was over. Wanting to stay in Logan so the children could be near their father, she knew she needed to look for a means of support, which she cobbled together from her experiences at the university and from her new-found passion for pottery.

For 18 hours a week she worked at USU’s Nora Eccles Harrison Museum of Art, where she had received a Mountain West fellowship to create a ceramics catalog for the museum’s collection. “That was the time when Twain Tippetts had been director of the museum and he was collecting a lot of pottery from miscellaneous grad students and keeping no record whatsoever. It would be ‘Student pot no. 1‘, Student pot no. 2’ on the bottom of the pots.” So the catalog became an investigation. “If I could find out who did one, I could compare the style and the finger marks and the ridges and the handling of the clay and match it up with others.” All those credit hours in archeology were not wasted. “I wasn’t paid a whole lot to do that job, but I really enjoyed it.”

She also began teaching classes at Logan’s AVA (the Alliance for Varied Arts, now part of the Cache Valley Center for the Arts), where she was also the artist in residence for 17 years. “I used to have to pack up my wheel in my car and piles of clay and tools and go around to Cache Valley schools and make pots with little kids,” she says. “At one point I made pots with something like 270 school children in Tremonton Elementary and arranged to have them fired in the electric kilns the little old ladies in the area had to make porcelain dolls.”

After years of working with hobby potters, however, she developed a hunger to teach at the university level, to work with future professional artists. “As luck would have it, I had met my current husband and when I said I wanted to go to grad school, he said ‘Go for it and I’ll take care of your kids.'”

So she put together a portfolio (the only real application requirement at the time) and applied to Utah State University’s program. “I still had three jobs and went to grad school full time,” she says. It was the late ‘80s and Gaell Lindstrom and Larry Elsner were teaching at USU, but the real draw, she says, was the newly hired John Neely. It took Harris a total of three years to finish—Neely left for a year— but she was glad for all the time she spent there. “You make the best work the last two months in grad school . . . it’s not your first idea that’s your best idea.”

While working on her MFA she began volunteering with the National Council on Education for the Ceramic Arts (NCECA) as a registrar. She was responsible for keeping track of the annual traveling exhibitions and in the process became acquainted with a broad range of artists. “I got to meet all these amazing people who were top of their field in ceramics.” After proving herself a “responsible slave,” she eventually was appointed as Exhibitions Director on NCECA’s board. For six years she curated two big shows a year and produced a catalog for the organization.

After Harris finished her MFA in 1990, she taught for a year at the Kansas City Art Institute as a sabbatical replacement, but afterwards returned to Logan, where her daughter was still going to college. She taught for a year at Utah State and then, in 1996, Harris beat out three friends to get the position at Southern Utah University, where she has remained for the past two decades.

During that time, interest in her work has steadily increased and she’s regularly invited to exhibitions across the country.

Her ceramic works have the feel of anthropological items, as if they are part of some ancient culture. “I’ve looked at pots from other cultures but I try not to be completely literal, I try to put my own mythology in them.” Her works are frequently graced with small creatures—frogs, snails, scorpions—creatures with certain symbolic associations, though not necessarily for Harris. “I’m not trying to make a statement about rebirth if I put frogs on my pots,” she says. “I just want to get people to look closer.” Her works are deceptively small—17 inches is a large piece for her—and so it is important that they have a “good profile, a strong presence. I like them to be a good pot in a small scale.”

What you won’t see in Harris’ works are glazes. “I hate glazing,” she says. “If you’re going to destroy a pot it’s in the glaze fire.” For years she fired her functional work and like other potters made her living based on whether or not the pot came out. “I was always disappointed if there was a failure.”

If anything is on the surface of her fine art pieces it is a slight wash that might change the color or sheen a little bit. “So, since they’re basically naked, there has to be something else going on.” She has developed different ways to add visual interest, working in textures and motifs at different stages of the drying process. “Over the years I started texturing things and then I just got crazy about it.” It gives her work a rich if sometimes rough look. Because they are stoneware, they tend to look rugged on the outside, and she’ll add slight inclusions to increase the surface interest — magnetized sand from the nearby Parowan Gap, for instance, which creates small black polka dots that sometimes turn red.

Overall she’s interested in formal rather than functional qualities. “I’m not looking at the culture and trying to replicate the purpose of the original. I‘m working with the form, I’m stealing the form, but not so much the intent of that piece.” Her works appear functional—you can open the lid on things, or pick up a pitcher and pour liquid from it. You might think twice before doing so, however. On one piece she’s placed over 80 thorns on the handle, so if you were to grab it to pour, the blood from your hand would mix with whatever liquid you were pouring.

“There are a lot of potters who really hate my work,” she says. “Not hate, but they say, ‘Why do you do that, it’s neither fish nor fowl.’” She likes to make them difficult, though, to give them this unsettled quality. “I like them to all have mysterious purposes. I want [the viewer] to feel the mystery.”

Not so with her functional ceramics. “I don’t like flawed pots,” she says. “I can’t stand a coffee cup that doesn’t feel good in your hand.” While she’s well known for her formal, fine art ceramics, she continues to make functional pottery. “My personal theory is if you don’t use it you lose it. So in order to be a good teacher and to be able to teach a broad range of techniques and styles and firing effects you’ve got to dabble. I enjoy that.”

“I really enjoy teaching,” she says, looking back on her 19 years at SUU. “I grow to love almost all my students, even the ones that are the most difficult.” She’s not crazy about teaching two GE classes every semester —where she’s expected to teach 20 people in a class, something possible in a more academic subject but not in a hands-on discipline like ceramics—but she says she has plenty of motivated students; and she’s eager to move them forward in their careers. She stresses to her students the need to photograph their work, to enter it into exhibitions. She speaks proudly of a recent student, who had been accepted into 27 national exhibitions by the time he graduated.

By 2004 Harris had become completely deaf, which created problems in the classroom. She was lip reading, but that became difficult during critique sessions when students would get excited. She now has a cochlear implant.

While her teaching assignments keep her busy, she manages to carve out a couple days a week to work in the studio. She might focus for two or three months on an upcoming exhibition, creating her purposeful mysteries. Then, to relax, she’ll throw some functional pots and decorative items. And every now and then a colleague from the anthropology department might come over to ask for her help in reconstructing a kiln or understanding a ceramics process.

You can view more of Susan Harris’ work at susanharrisceramics.com. Look for her work in the upcoming UDAM’s Statewide Annual, where she’s a regular exhibitor (opens November 20). She also has shows this fall in Valdosta, GA, Moorehead, KY and at the NCECA Honored Members and Fellows of the Council in Kansas City during the 50th anniversary NCECA Conference. 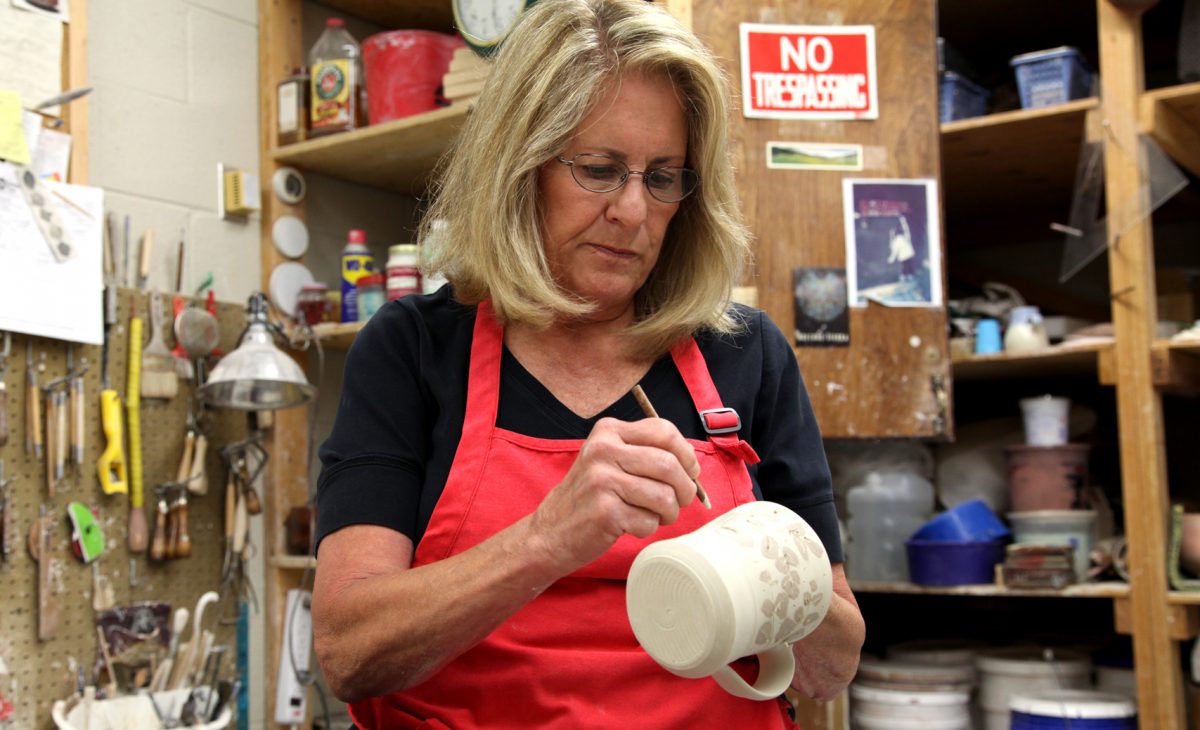