More Than 100 Certain Women Take on a Mormon Taboo 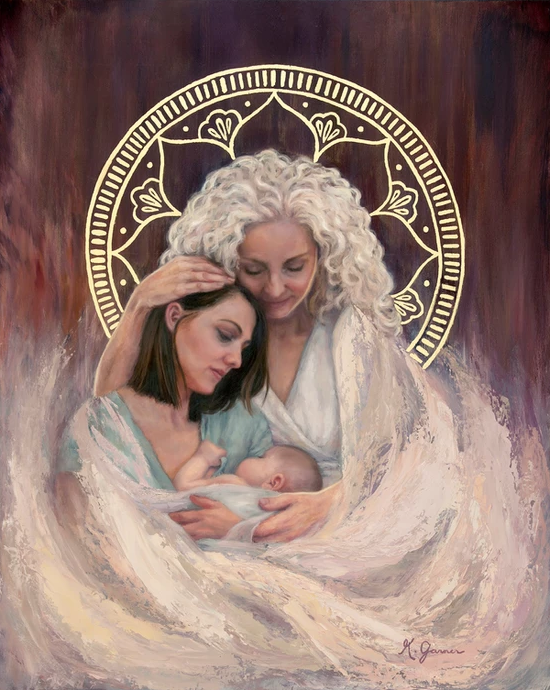 “In the heav’ns are parents single? No! The thought makes reason stare! Truth is reason; truth eternal. Tells me I’ve a mother there.”

For many years, these words, written by Eliza R. Snow in the 19th-century, were one of the few references to a female deity in the culture of the Church of Jesus Christ of Latter-day Saints. Though one of the unique doctrines that sets the LDS Church apart from traditional Christianity, the belief in a “Heavenly Mother” was rarely discussed until recent years, when additional references began appearing in church educational material and General Conference talks. In many circles, it remains a taboo subject and women who have tried to understand or share experiences of a female deity have often been ridiculed. But Heavenly Mother is the focus of the second Certain Women invitational exhibit (the first was held in 2019), now up in Salt Lake City. Certain Women: Reflections on a Mother in Heaven features work by more than 100 women in the LDS community, most from Utah but some from other states and countries, representing a global church population, sharing their experiences with Heavenly Mother through their art.

To organize the chaos of so many works in the small space above Anthony’s Fine Arts and Antiques, Certain Women curated the paintings into several groupings: understanding Heavenly Mother through traditional religious imagery; motherhood; nature; and knowing ourselves. The type of works are diverse, from painting, paper cutting and sculpture to furniture design and handiwork. 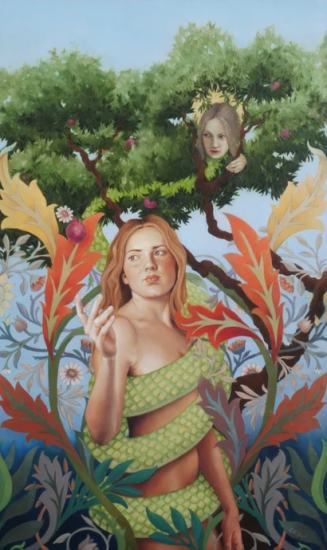 Emily McPhie, “Eve in the Garden with Heavenly Mother”

To express their unique individual and cultural beliefs, many of the artists transform traditional symbols of religious divinity. In Cindy Lewis Clark’s encaustic “O’ My Mother,” a female figure crowned with a gold halo stretches her arms outward in a manner similar to Bertel Thorvaldsen’s “Christus,” the most widely accepted image of the resurrected Jesus in LDS culture and part of the church’s new logo. Clark’s work calls to feelings of home, comfort, and also sacrifice. In some LDS circles, it has been speculated that Heavenly Mother visited Jesus during his suffering in the Garden of Gethsemane and comforted him as the angel sent by God the Father. Clark’s mother taking on the pose of the “Christus” is a reminder of this singular moment.

Emily McPhie’s “Eve in the Garden with Heavenly Mother” illustrates a unique aspect of Mormon theology with the artist’s individual twist. In Mormon theology, Eve’s choice in the garden is viewed as a good and necessary step towards progression — though Eve would leave the Garden of Eden, she would also be able to have children and experience the joy of motherhood — rather than as part of a calamitous fall; and McPhie’s Eve is presented in a positive light. In Christian painting, the serpent in the garden was sometimes depicted with the head of a woman, as a further denigration of womankind; McPhie embraces this trope, though she inverts the commentary, by depicting Heaveny Mother as the serpent, helping Eve to make her decision.

Lynde Mott also embraces familiar religious tropes in her depiction of a female deity, though she uses non-traditional materials in her depiction.  Using silk flowers, coffee filters, paper, and other materials, she creates a dress and flower crown. The work’s title, “Clothed in Glory,” references the inherent glory of divinity but also alludes to the temple garment worn by members of the Church of Jesus Christ of Latter-day Saints and to LDS scripture: “Enoch declared: ‘I beheld the heavens open, and I was clothed with glory'” (Moses 7:30). The elegant and delicate piece covered in flowers and butterflies is also a nod to Mother Earth and the role of Heavenly Mother in the creation: the teachings of the LDS Church suggest that Heavenly Mother had a direct role in the creation of the spiritual and physical bodies of humankind.

Many artists embraced nature imagery as a way to express the presence of Heavenly Mother in creation. Susana Isabel Silvia hand-cut paper to create organic, ethereal shapes like stars and clouds:The effect is like a scientific diagram of the constellations softened with swirling air shapes. 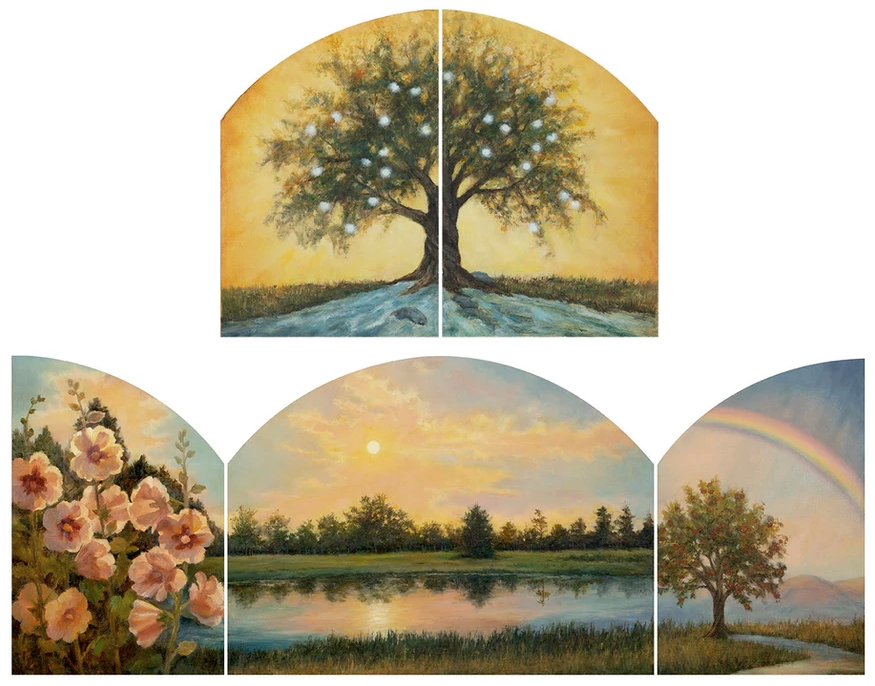 Heather Graham uses both nature imagery and a triptych model in “The Great Plan of Happiness,” a reference to the LDS belief in a progression from a premortal existence to life on Earth and finally immortal existence where they live in eternal families. The first panel of hollyhocks represents Heavenly Mother and also Graham’s own mother who grew those flowers in her garden. The central and third panels use other nature imagery, specifically trees, to allude to the strength and stability of Jesus Christ.

Nature abounds in Emily Fox King’s impasto painting of a mother and child. She uses floral patterns to create both beauty and chaos, feelings familiar in motherhood. The figures in the scene are peaceful, connecting with their wild, post-impressionistic surroundings. King’s use of color brings up strong emotions in the painting of joy and peace. 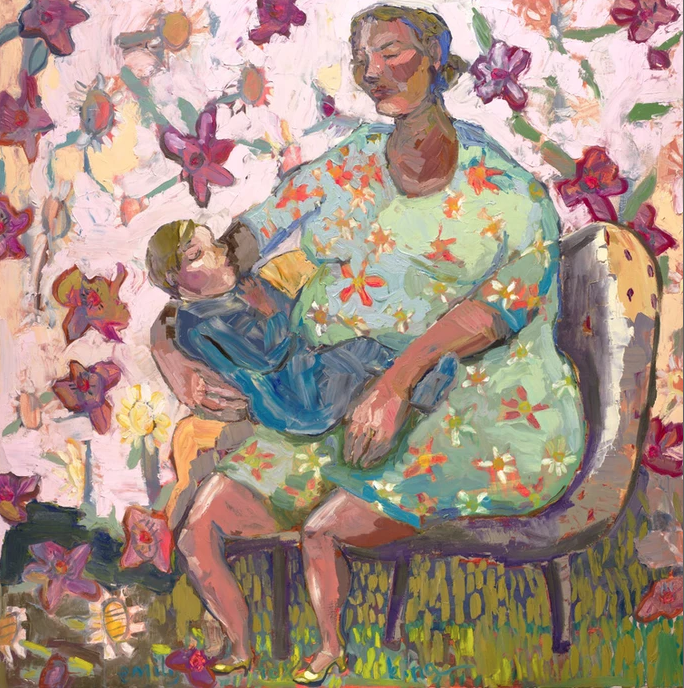 Emily Fox King, “We Are Given”

This representation of a loving, caring mother is one of the most frequent motifs in the exhibit: we imagine a heavenly mother by looking to earthly mothers. The mother and child pose also reverberates with echoes from centuries of Christian iconography.

Annie Poon’s “Snuggling” is a sweet nursery illustration of closeness between mother and daughter. Modeled after her sister and niece, Poon’s work is an intimate glimpse into the quiet moments of family life. Poon also wrote in cursive “Where I am ye shall be also,” a quote from Jesus speaking to his disciples, but also similar to the promise that Ruth makes to Naomi in the Old Testament, to stay with her mother-in-law, support her, and care for her.

Katie Gardner’s “Mother’s Embrace” depicts an elderly female figure holding a young mother and her new child close. The tender hug shows the love Gardner has felt from her Divine Mother in the process of raising her own daughter. 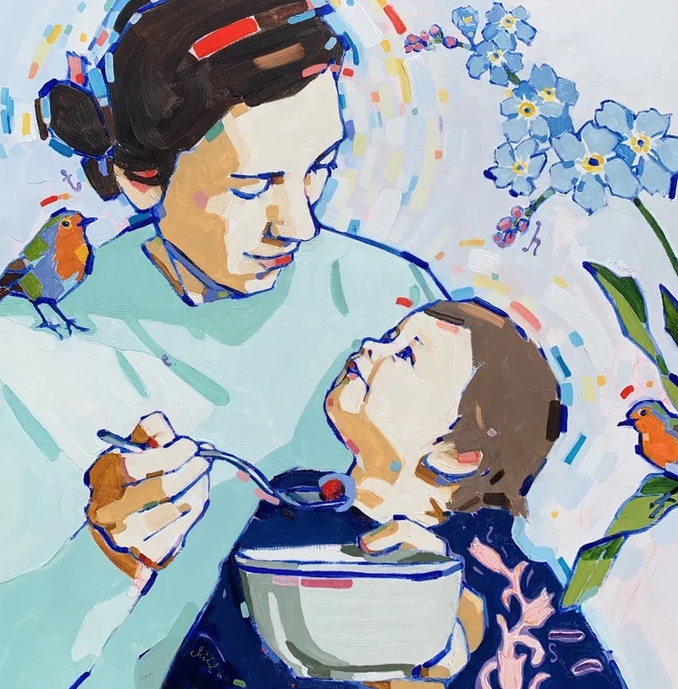 Linda Etherington, “Teach Them to Love One Another,”

In “Teach Them to Love One Another,” Linda Etherington adds delicate rainbow halos to denote the figures’ divinity. Etherington’s work shows what a lot of women in the LDS church feel, that the best examples of Heavenly Mother in their life have been moments of love felt as children or mothers, as a care receiver or caregiver. LDS Church apostles have suggested that when a woman takes on a role of nurturing through patience and kindness, that is the direct reflection of her Heavenly Parents.

Abigail Berg takes a different approach to motherhood intimacy. In her sculpture “I Was There” a mother stands behind her son, supporting him as he reaches out to touch a dove. Berg’s sculpture speaks to another facet of motherhood, teaching and then letting the child go to make their own decisions always knowing they have a parent to turn to for support.

For Rebecca Jessee the best representation of Heavenly Mother is her earthly mother. Jessee’s portrait of her mom complete with an Early Christian halo is a reminder of the belief many Christians hold that the best way to know Christ is through the good example of others.

One of the reasons the concept of a Heavenly Mother resonates with female artists is it allows them to look to themselves and their families in a search for a female divinity. Brittany Soucy shows a connection between the earthly and the divine in “Communion.” A communion in LDS culture is not a formal ceremony, but instead a quest for connection to the divine. Soucy’s abstract piece uses color to show a connection between us, as earthly creations of brown and green, and the soft, celestial pinks and blues of our Divine Parents. 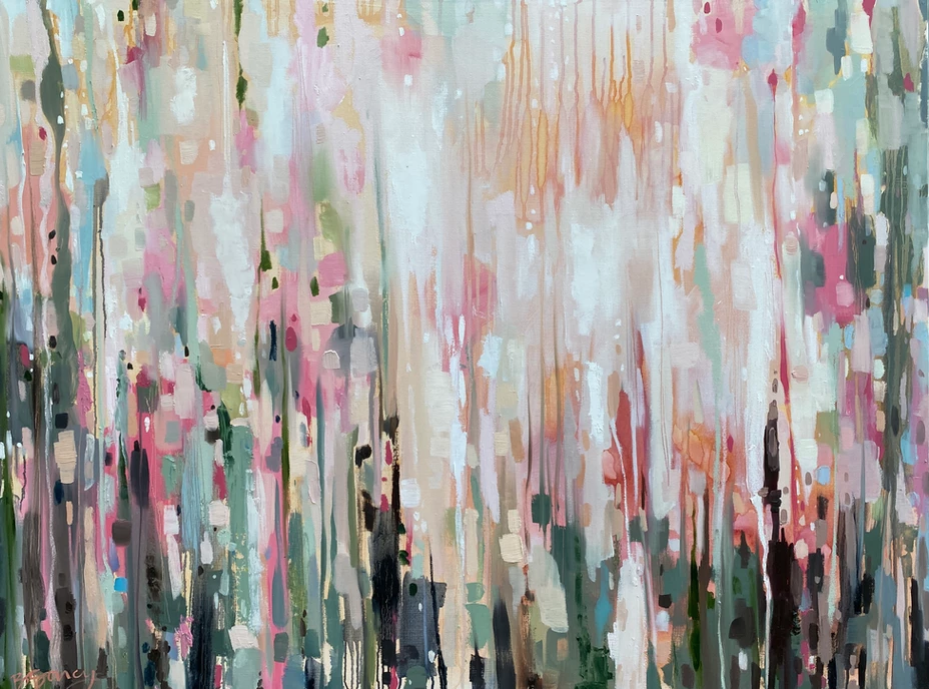 Megan Rieker’s “Creation” depicts a gardener spreading seeds. Flowers pop up around the figure’s feet following the path of the dropped seeds. In her artist statement, Rieker says that when she gardens, she feels like her Heavenly Mother. She can also take part in nurturing and growing something new.

All of the artists in Certain Women share some part of their journey to know and understand their Heavenly Mother. For Mya Cluff, it has been a frustrating process. In “Beginning to Understand Her,” Cluff photographed a hand with the fingertips dipped in gold. It is a beginning to understanding a Divine Mother through small glimpses of her presence in daily life, a simple but growing appreciation for the role she plays in Cluff’s life.

This exhibition is a bold exploration of one of the most taboo topics in LDS Church culture and doctrine. There is no reason, besides tradition, that Heavenly Mother is not openly discussed, revered and connected with as a key part of LDS Church gospel. Her presence within the Mormon concept of the Godhead has not been fully identified, but her role and divinity, whether implicitly or explicitly expressed, are key to the beliefs of eternal families and the Plan of Salvation. The artists of Certain Women, no matter their relationship status with the institution of the Church, show a deep connection to a Heavenly Mother and help broaden the conversation about deity. 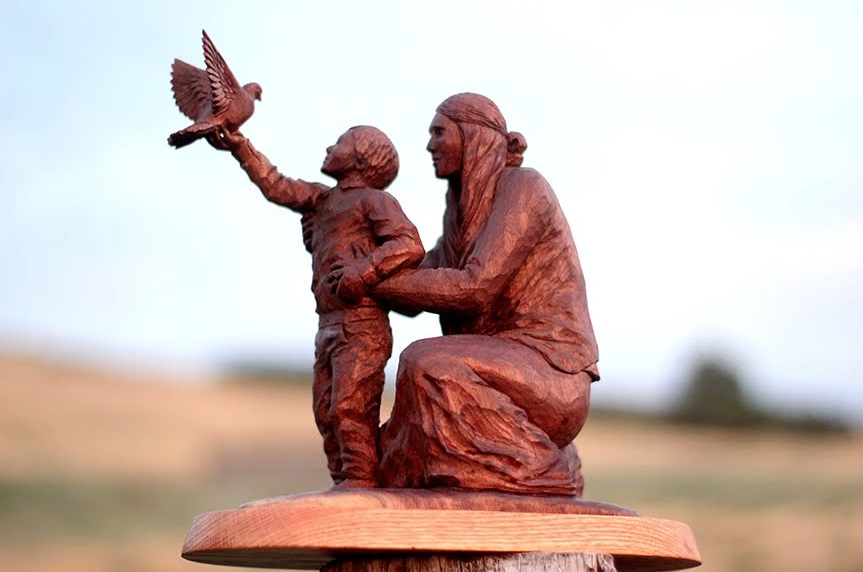 Abigail Berg, “I Was There”