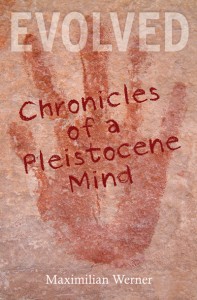 In an interview with 15 Bytes on the occasion of the its publication, Max Werner explained that his fourth book, Evolved: Chronicles of a Pleistocene Mind, was actually written before the three that preceded it into print: Black River Dreams, a collection of literary essays about fishing, Crooked Creek, a novel about settler experiences in 19th century Cache County, and Gravity Hill, a memoir of growing up in suburban Salt Lake. In fact, Evolved had taken seven years to reach bookshelves.

Topics in the sciences tend to lie fallow for decades, even centuries, then change overnight, often being completely rewritten in a few brief years. Such change overtook Natural History following the publication of Charles Darwin’s Theory of Evolution in 1858. Early efforts to adapt his ideas to human behavior led to the clumsy and discredited notions called ‘social Darwinism,’ a hodgepodge of justifications and excuses for the social and political inequities of the 1870s. After that, respectable scientists pretty much turned their backs on attempts to use easily misunderstood concepts like ‘survival of the fittest’ to account for human behavior. All that changed a century later, when instead of species-wide principles, it became fashionable to explain narrow, if universal, human behaviors in terms of their survival value to individuals. To take just one example, the traits that make men and women attractive to each other could be explained in terms of the need to perpetuate their DNA.

It’s important to understand here that while Evolution is a theory, a comprehensive model that explains biological facts and is accepted and used by scientists in their work, a proposed role for survival fitness in grooming, deportment, or other behavior is a hypothesis, meaning at best an informed guess. Such hypotheses are rarely supported by evidence, and depend for acceptance on seductive reasoning. Werner believes his insights are genuine and could be helpful, so he builds his case slowly and carefully.

Speaking of his theory at the end of On The Origin of Species, Darwin writes, ‘There is grandeur in this view of life.’ That was not an easy claim to accept then, and for many, particularly in religious countries like the United States, it still isn’t today. Raised to think themselves angels, many find it hard to accept that human nature is overlaid on structures that served apes so well. Maximilian Werner argues that beyond choosing what we’re comfortable believing, we have to accept the facts of our evolutionary origins if we are to survive our failure, up till now, to evolve beyond them. In a sense, his book could have been called Un-evolved, because while he begins with Evolution, he recognizes something that may not have been evident yet to Darwin’s contemporaries. Evolved structures and behaviors are durable. They don’t just disappear when no longer needed. Beneath our skins we carry the bones of a vestigial tail. Beneath our elegant logic and creative arts, our impulses are grounded in brain structures that evolved during the Pleistocene Era. It’s probably obvious that both the violence disrupting society and the reaction of those who think the solution is for everyone to carry a gun for personal protection are examples of the Pleistocene mind at work. What Werner wants, though, is to move beyond these obvious examples in search of more subtle, potentially far more pervasively influential examples.

Readers of his previous books will know to expect richly detailed observation of nature in Evolved, and in fact the opening chapter, Arachnophilia, contains some of the best, least pretentious writing by a naturalist since Ed Abbey. Set in his own back yard, it takes readers along as he channels Aristotle, crawling around in the underbrush while observing the numerous spiders he finds, cataloging their elaborate, sophisticated, and mysterious behavior, all along holding back his urge to generalize prematurely or accept some expert’s opinion too soon. Unfortunately, some readers—in particular those who feel compelled to read the parts of a book in the order of their binding—may give up on Evolved before they get that far. If the book has a flaw, it lies in its architecture (an irony in a book located primarily out of doors). Whoever decided to print Wandering and Wondering: A New Story for the World in the place of an introduction should have marked it as such. That way, readers who like their story first, and who can just as well wait for the theory that it means to illustrate, would know to skip it, read the book, and then come back to it later.

The wonderland of Arachnophilia is followed by two long sections. The first, A Field Guide to Habitat Theory, offers a walking tour of Werner’s efforts to identity the residue of the Pleistocene experience in human consciousness. Readers who have read The Art Instinct, by Denis Dutton, will probably be reminded of his argument that art draws much of its power from our tendency to enjoy works—he particularly stresses landscapes—that reverberate with what our ancestors learned as they came out of hiding and began to spread around the globe. Werner’s hypothesis is more inclusive, and in general less tendentious, than Dutton’s. He isn’t trying to convince readers that certain flora and fauna make better art; sounds at night sound louder and feel more threatening than those heard in the daytime, and it’s not hard to believe that cavemen felt the same way, or even more so, about it as we do.

In his final section, Implications of an Ecochildhood, Werner applies habitat theory to his own life. How compelling this is will vary; those who share his Utah background will get more out of it, as will those who have children and agree with him about the importance of deliberate, self-conscious parenting. By the time he gets around to sharing his final example, though, the amateur scientist has faded from sight, replaced by the powerful story-teller who is one of Utah’s treasures. Or, if we’re paying attention properly, he hasn’t gone away: he’s just blended back into the voice of the man who chose to pry him out and show him to us in the first place.

About the Author
Maximilian Werner is the author of the 2011 novel Crooked Creek, a Utah Book Award finalist. His poems, fiction, creative nonfiction, and essays have appeared in numerous journals and magazines, including Matter Journal: Edward Abbey Edition, Bright Lights Film Journal, The North American Review, ISLE, Weber Studies, Fly Rod and Reel, and Columbia. He lives in Salt Lake City with his wife and two children and teaches writing at the University of Utah.