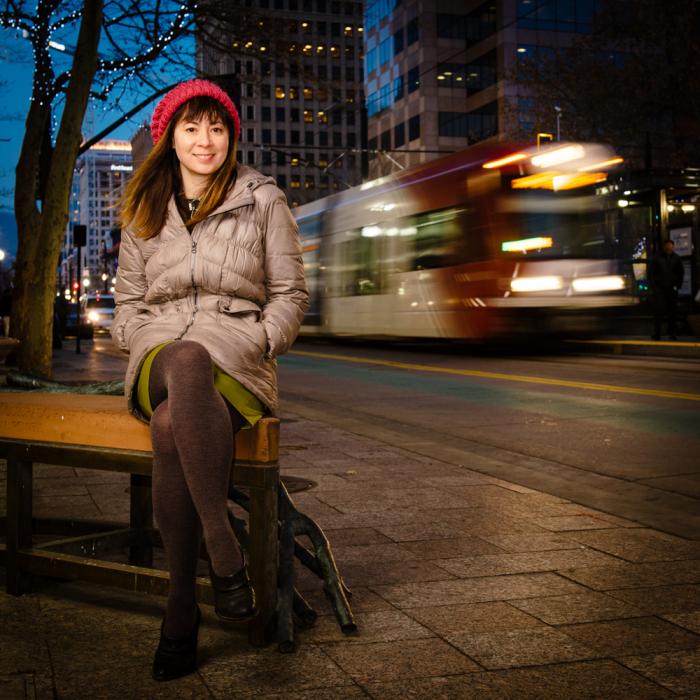 Paisley Rekdal was recently named the Utah Poet Laureate, a five-year post, and it is obvious that she deserves the title. Besides an upcoming collection of poetry in which she reimagines Ovid’s Metamorphoses, Rekdal has published five collections of poetry and three books of non-fiction. Her poetry and essays engage the big topics of race, sexism, and environmentalism, but they also dig deep into the micro dynamics of identity—public and private—and how representation and interpretation can imprison or liberate individuals, literature, the natural world, and our communities.

Rekdal seems endowed with endless creative energy. While doing a residency in Umbria, Italy, last year, she said she would eat a little, write all day, go for a run, eat dinner, have some wine and then write again all evening—sometimes until 2 in the morning.

Of course, she points out, when she is teaching she isn’t always able “to be so prolific,” but judging by her long list of publications, readings, presentations, and community outreach, whether on campus or abroad she remains a tireless writer, thinker, teacher, and activist. Her friend and fellow poet, Kimberly Johnson, says she admires the way Rekdal sets goals and then follows through on them. “She decided to start running a couple of years ago, and she has been diligent ever since,” Johnson says.  “She decided she wanted to learn to play Spanish guitar, and she’s been taking lessons for a year now.  She learned how to do remodeling work so that she could get her cabin in the shape she wanted it.  She is admirably capable at all the stuff she does.”

Rekdal is so capable, disciplined, and accomplished that she is currently the director of the creative writing program at the University of Utah, which boasts one of the most prestigious creative writing Ph.D. programs in the country. But Rekdal didn’t start out wanting to be a poet—her first dream (besides to be Mae West) was to be a reporter or an editor for Harper’s Magazine. While working on her doctorate in medieval studies she decided to take a break to just write poetry. In her words, she “ended up with a Fulbright” and moved to Korea. From there she decided to get an MFA, and, after her second book was published, she applied for a teaching position at the University of Wyoming. In 2003 she came to the University of Utah where she is a full professor.

Since all poetry is, essentially, a form of rebellion—whether it rebels against the authority of institutions or societal repression or just against death and the passage of time—poets may feel conflicted about working in academia, where institutional structures threaten to inhibit honest writing. Rekdal says she sometimes thinks about the problems inherent in being a poet in academia but that to write poetry “there is no out.” But, she says, it is no different than the publishing world—whether writing in a university or freelance, it is all working within a “capitalist authority” and each authority has a way of assimilating the artist into its institution. “Same with prizes,” she says. “We think it is a dream to win the Pulitzer, but who are the artists that win those prizes? They all represent a certain value system. We just need to understand the system we are working in.” When it comes to sexism, racism, and classism—all success is limited by the “social modes, ideas, and philosophies” of the community and establishment that consumes the work.

In his essay “Poetry and Ambition,” Donald Hall laments the lack of poetic ambition among contemporary American poets. By poetic ambition he means the “desire to make words that live forever” as did the great poets like Keats, Milton, and Horace. He sees most contemporary poetry as mediocre because it develops out of a “petty egotism that spends itself in small competitiveness” such as accumulating publishing bylines and blurbs on book jackets, or on being the “best poet in the workshop” instead of developing poetry out of a desire to “be as good as Dante.”

While Paisley Rekdal has acquired an abundance of publishing bylines, impressive book jacket blurbs, and countless prizes (including two of the five 15 Bytes book awards for poetry), her poetry is far from mediocre. In fact, much of Rekdal’s work defies Hall’s pronouncements that verse today is brief, anecdotal, and lacking connection with large ideas. Rekdal plants herself solidly in the tradition of great poetry while extending her vision of language and art into the new millennium.

Rekdal’s knowledge of the masters, both ancient and modern, is intimate, her repurposing of their characters and tales–of whole myths–bracing. In her poem, “Baucis and Philemon,” in Imaginary Vessels (2017), she rewrites Ovid’s tale of pious hospitality toward the disguised gods. In Rekdal’s telling, the unknown gods, Jupiter and Mercury, who seek shelter and food from the destitute couple, are brilliantly reimagined as one person—a pilfering and wayward son returned to his modern-day home for a visit. Rekdal describes the boy’s rage, his accusations against his parents, his thieving, and how the mother labors to hide his many offenses from her husband—she even leaves conciliatory bundles of cash where she knows her son will find them. The poem’s small story of a mother’s turmoil is connected not only to the Roman fable but also to its counterpart in the Old Testament (Lot and his wife feeding two angels before the destruction of Sodom and Gomorrah), as well as to the New Testament’s injunction to entertain strangers in case they be angels (14 Acts) or gods (13 Hebrews) . These connections add layers of meaning to the psychological pain of the mother, and the myth becomes a metaphor for the way a mother sees even her most resentful and self-destructive child as disguised deity.

Well-versed in the literature though she may be, Rekdal’s uncanny use of metaphor is why her verse is so potent. She links bats to children not conceived, kaleidoscopes to created faith, tattoos to the erasure of the self. Rekdal says she was never “a young prodigy or anything” when she started writing poems. She says that although she had a strong ability for making images it isn’t the images that make a poem. To create a poem a poet must understand metaphor so that they can push a metaphor until the two disparate things being compared become equal. Her mastery of metaphor is evident in her shorter lyric poems as well as in her long narrative poems, where she often weaves historical or political information together with a personal narrative, not unlike a braided essay.

These designs demonstrate one of the ways she controls the intense emotional material in many of her poems without allowing them to become maudlin. Her use of a kind of formal structure — not like a villanelle or a sonnet, but more of a lens — allows her to explore the personal aspects of the piece. She says she picks up a religious or historical lens through which she can write about herself to keep those painful elements from overwhelming a poem. A good example of her use of a particular lens is in her poem “Easter in Lisbon” from Animal Eye, voted one of the five best poetry collections for 2012 by Publishers Weekly. In the work it was her intention, she explains, to be totally honest about racism in America, and about how she was demonstrating that same racism toward her black friend. But she soon came to realize how her friend’s response to her had been shaped by misogyny and racism as well. To deal with the emotions behind the relationship, she weaves together details about the 1991 beating of Rodney King on the street of Los Angeles with her personal story. The result is a long meditation on race, privilege, the horror and wonder of caged animals, bigotry, American violence, and police brutality that tumbles down the page in an anxious need to understand, to confess, to elucidate all the confusion in the personal and universal incidents of the poem.

She uses the same tactic in an essay on “Mapping Salt Lake City,” her online community project where writers and artists and scholars are invited to create pieces that reflect the history and communities of Salt Lake City. In her essay “The Lives of Strangers,” Rekdal braids together narrative strands of her own divorce with those of the 2004 murder of Lori Soares Hacking by her husband Mark Hacking in Utah’s capital city. Rekdal’s revelations in the essay about her own infidelity and the complexities of the affair are fearless. She told me that to write about someone else’s foibles in nonfiction you have to be willing to also put “yourself on the chopping block.” Her essay never swerves from its terrible honesty, and its explorations of guilt and betrayal are breathtaking.

This is not to say that Paisley Rekdal is only serious and intellectual. She is known widely for being fun and playful. Her fascination with Mae West makes for some exuberant linguistic acrobatics. For example, in “Self-Portrait as Mae West One-Liner” she trips from one delightful line to another:

Tangelo. But I’m no angel.

An accomplished nonfiction writer and memoirist as well as a poet, Rekdal can also be funny and self-deprecating. In an interview about her unusual name on the website “The Nervous Breakdown with Matthew Batt,” she responds to his question about the difficulty of being raised with the name Paisley by saying, “being a child of the ’70s and ’80s in pre-Yuppie, Stoner Seattle, I was hardly the sole victim of Bad Parental Decision-Making. Some of my classmates were (and I’m not kidding) Blueberry and Rainbow. In some ways, I think I got off lightly.”

Utah’s Poet Laureate has created a body of work that exceeds Donald Hall’s injunction that poetry must “not express mere personal feeling or opinion” but that it “must by its language make art’s new object.” Her energy and passion and poetic ambition continually push her poetry toward surprising insight and aesthetic wonder. Rekdal’s language, images, metaphors, and narratives are never mired in just personal feeling or opinion, and the stunning and fresh radiance of her vision is exactly what contemporary poetry needs.

Paisley Rekdal will read from and discuss her work, along with poet Natalie Taylor at the newest installment of our READ LOCAL Finch Lane Reading Series, presented by the Salt Lake City Arts Council and Artists of Utah, Thursday, Jan. 25, at 7 p.m.