Let’s Go Back to Rockville: Exhibition Aims to Save Historic Bridge 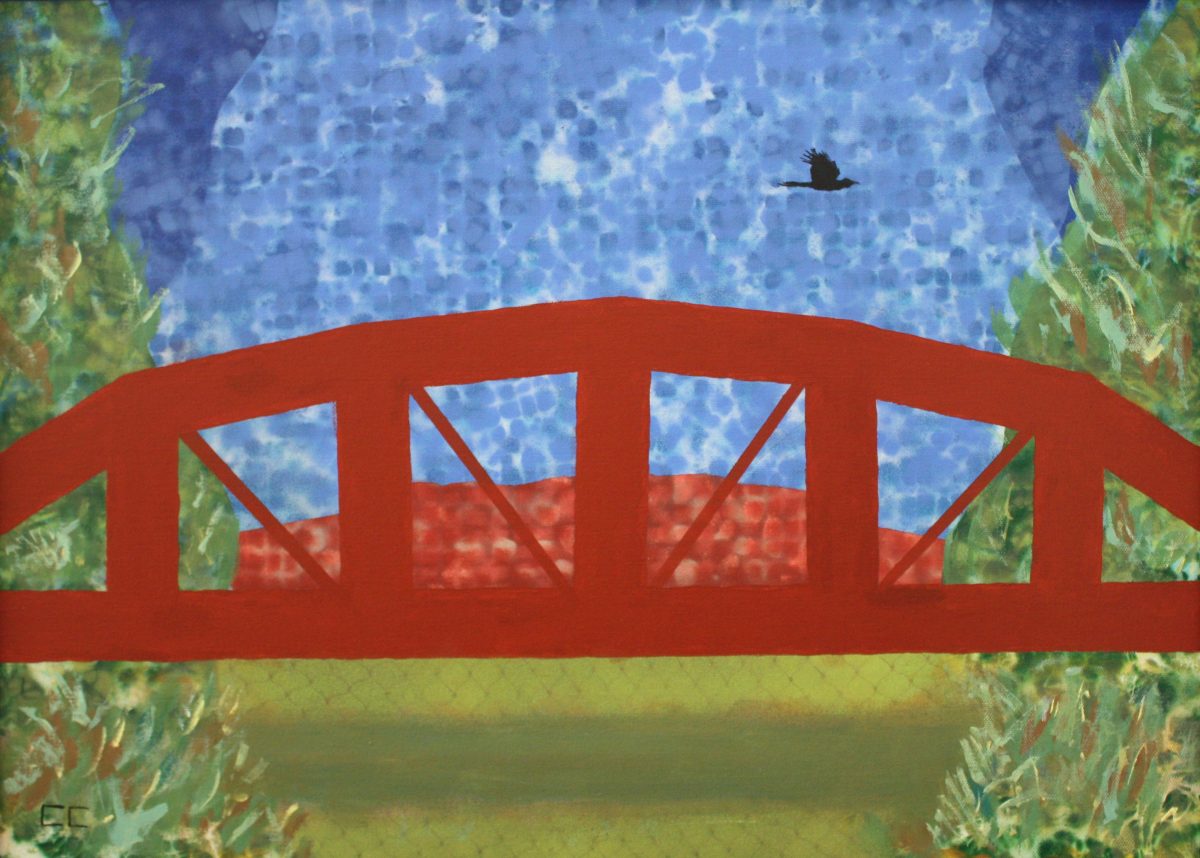 It isn’t often that a humanmade structure in the shadow of Zion Canyon captures the interest of the art community surrounding Zion National Park, but this month the historic Rockville Bridge has done just that, in the aptly named “Rockville Bridge Exhibition and Sale” June 1-July 11 at the Canyon Community Center in Springdale.

The purpose of the show is to celebrate, and raise funds for the preservation and renovation of the Rockville Bridge, says Jodi McGregor, an artist and Rockville community member spearheading the exhibit. A silent auction running the length of the exhibit will benefit the Rockville Bridge Capital Improvement Fund. The Green Bridge, as it has been called in days past, was originally built in 1924 as part of the Park to Park Highway System. Spanning the Virgin River, it trimmed 33 miles from the journey between Zion, Bryce, and Grand Canyon National parks, creating the Grand Circle Tour. It is now the last remaining steel 12-panel Parker through-truss bridge in Utah.

While the Bridge initially was built to entice tourists, it has evolved into a symbol of Rockville’s dedication to remain a quiet agrarian town, despite increasing waves of Zion-bound tourists and swelling suburban sprawl in nearby cities. Rockville townspeople are proud of the fact that the only commercial businesses in the town are bed and breakfasts, says Bridge Fundraising Committee member Joyce Hartless.

The effort by the town and the local artist community to save the bridge follows a decision by the Joint Highway Commission in April of this year to renovate, rather than replace the bridge, increasing the load capacity from 14 to 25 tons, thereby ensuring emergency and other services to homeowners across the Virgin River from State Highway 9. The decision comes much to the relief of the Rockville community, who were in favor of keeping the original bridge, Hartless says. As part of the decision, the town must raise 6.77 percent of the $2.5 million estimated to complete the project.

McGregor says she was attending a fundraising meeting when someone brought up the idea of enlisting artists to save the bridge and volunteered her services. Charged with gathering and hanging the artwork, McGregor says she has enjoyed seeing varied interpretations of the bridge.  “The Rockville Bridge is our icon here. It’s like our Statue of Liberty.”

The bridge even made an appearance in popular media when it was used by the Piano Guys in their online music video, ”Home.”

Artwork in various genres and media is represented in the “Rockville Bridge Exhibition and Sale,” including a healthy number of bridge paintings done in the style of traditional realism and impressionism, and photography with a strong narrative element, which befits the marketing and educational ambitions of the show, as well as a few stylistically unique contributions, such as Chip Chapman’s tongue-in-cheek “Rockville Bridge is Falling Down,” an homage to Roy Lichtenstein as well as, apparently, Rockville community member Paul Allen.

Even within the realistic depictions, there is variety in approach to portraying the Rockville Bridge. The bridge in the delicate pastel by Patricia Rose Ford peeks coyly from the cottonwoods; in Kira Sanoja’s nocturne only the top of the bridge is visible beneath the canopy of clear sky. Each shows a structure that by age or anthropomorphic sentiment has come to be regarded as more a part of the local landscape than infrastructure.

Absent from the exhibit, at least at the time of this writing, were images depicting the bridge in its green-hued glory days, curious considering it is entirely possible that the bridge will be restored to its original industrial green.

The “Rockville Bridge Exhibition and Sale” is worth a stop for advocates of historic preservation as well as an interesting artistic representation of a community actively protecting its economic niche. Those interested in additional information as it comes available can do so through the Historic Rockville Bridge Facebook page.