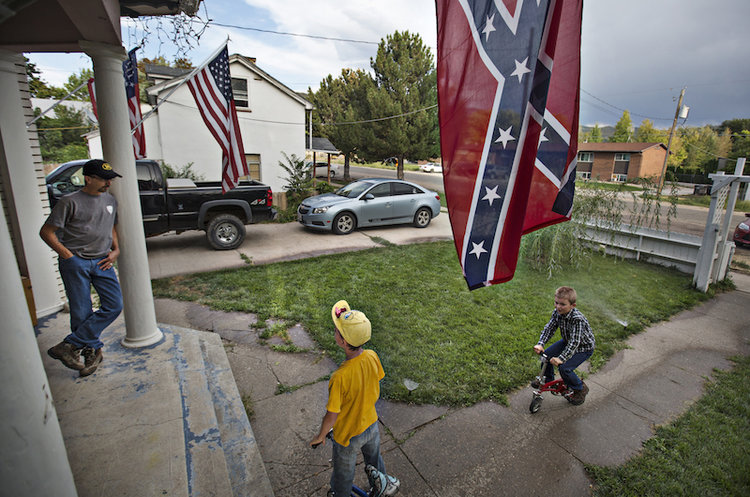 Maybe they are too bulky or I’m wearing too many layers, but I’m having a hard time checking my biases at the door. When I see a Confederate flag hanging over two young boys playing in their front yard in one image, or, in another, the words “I’d rather be waterboarding” stitched on the back of a baseball cap, I can’t help but respond negatively: if not outrightly accusatory, then these images are at least mocking and derisory, right? Yet, that’s not how the subjects of the photographs in Kim Raff’s Land of the Free view these images.

A photojournalist based out of Salt Lake City, Raff has been on assignment throughout the Intermountain West and beyond for marquee publications, including The New York Times and The Atlantic. She’s been on hand to document the first gay marriage in Utah, the struggle of cattle ranchers in rural Nevada, and Elizabeth Smart’s advocacy for rape victims. 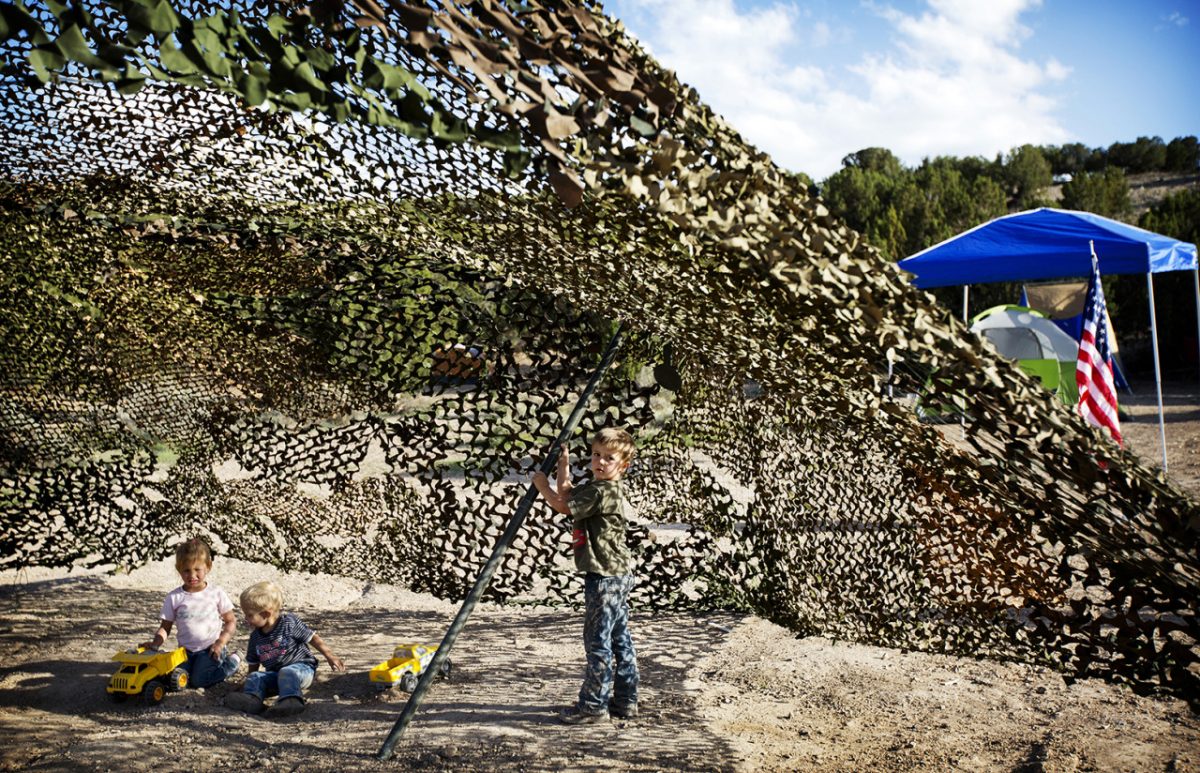 Her Land of the Free project, which is on exhibit at Granary Arts Center in Ephraim, chronicles the United Sentinel Militia. Funded in part by TheDocumentaryProjectFund, Raff began photographing Utah’s largest constitutional militia in 2015, when, during the Obama administration, fear of gun-control measures stoked gun sales and the proliferation of Second Amendment groups. Raff’s images on exhibit in Ephraim feature members of the militia standing guard or going through training exercises, but also socializing with one another and playing with their children. As Granary Arts director Amy Jorgensen points out, Raff is careful to document, not editorialize, and the members of the militia group who attended the exhibition opening (many are from Sanpete County) were pleased with the way she captured their community.

Apart from a video piece, in which members of the militia are photographed individually, rifle in hand, standing in front of the pinon-pine laded landscape of central Utah, as if posing for a portrait, Raffs photographs capture the group in candid moments, elements blurred, the lighting not always perfect: militia members piled in the back of a pickup truck or children playing beneath a camouflage canopy; a mother joyfully picking up her daughter after a training exercise or a pajama-clad boy interrupting a poker game. 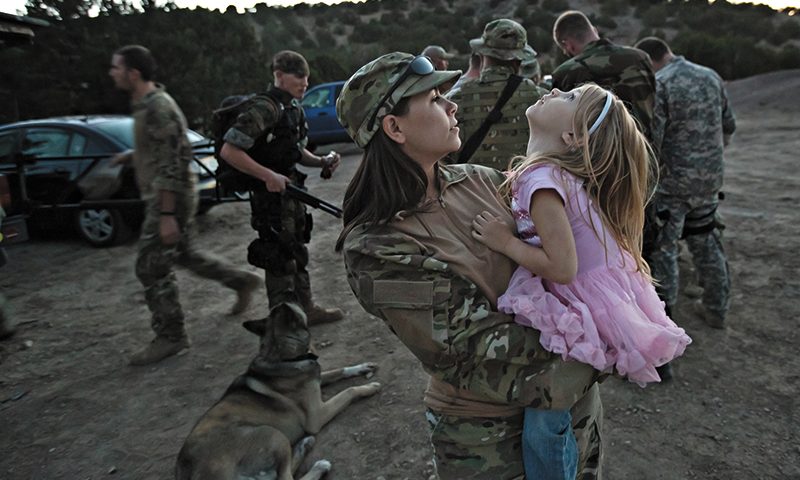 They are just like you, these images imply. That guy with the hat? He’s probably not a bad fellow, the awful message on his cap the sort of trolling you’re likely to see from a marginalized group — like the kid you knew in high school who liked to draw “anarchy” symbols on his textbook.  Far from threatening, the images might even appear silly. In one shot of a video documenting their training exercises, a middle-aged man who has seen thinner days runs toward an obstacle, has a hard time getting to the ground, lands shy of his goal and must awkwardly scoot himself closer — nothing like the fluid movements in a Hollywood movie.

A few are problematic: for anyone aware of the statistics of violence and guns in the home, the image of a man walking through a living room, gun at the ready, will be disturbing; and the figure on one of the targets captured by Raff unfortunately looks like a caricature of a Mexican bandit. But, really, I tell myself, shorn of some of my biases, most of these images show a group of people outdoors in camouflage gear getting some exercise and socializing — they could just as easily be out for the annual deer hunt. It’s a group of people looking for a sense of purpose and community, enlivened with a bit of playacting.

The subjects of the photos might even think something similar seeing images of me and mine, fearful for the fate of democracy, marching on the state capitol a couple of years ago.

Because, whether in camouflage gear or pink pussyhats, we’re all the same. 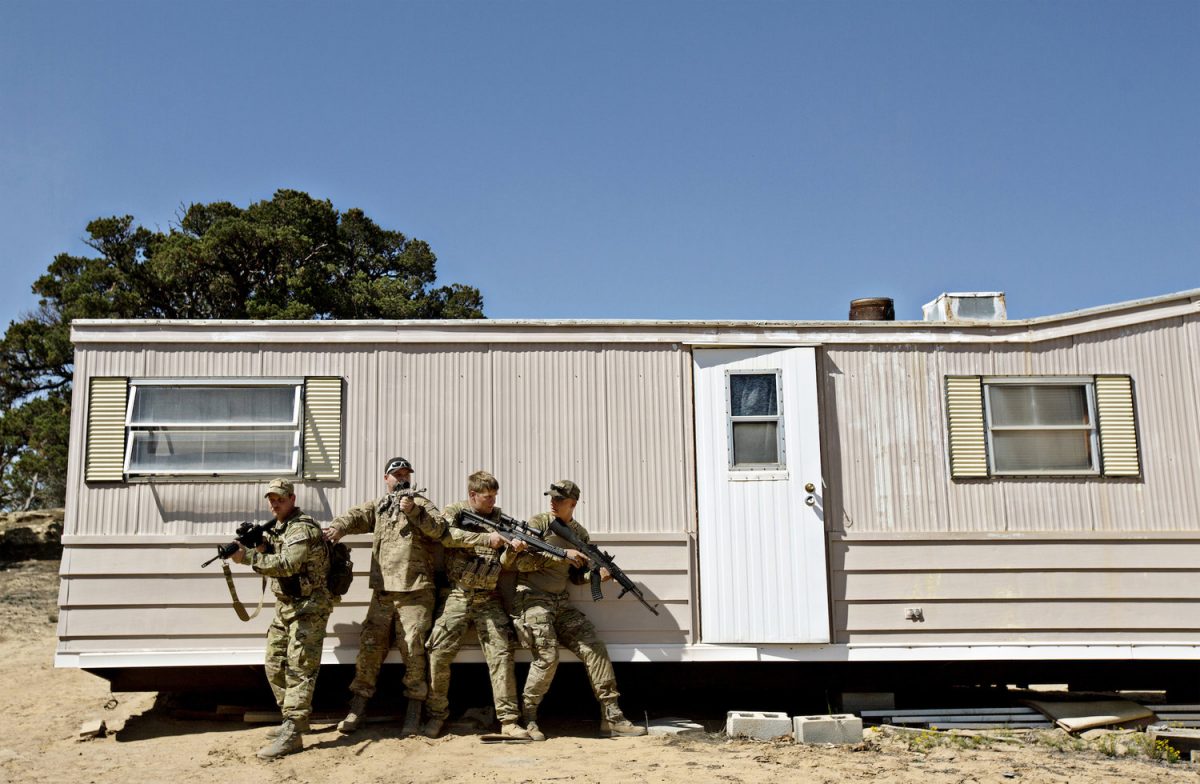