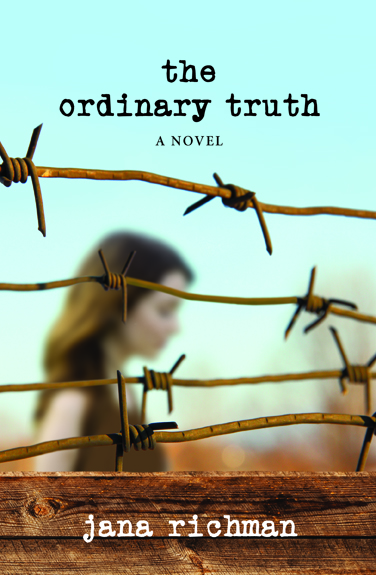 In a tense moment near the climax of The Ordinary Truth, a woman in her seventies wades across a rocky creek in a remote forest in the dark of night. As she feels her way, her senses heightened by danger, she conjures for readers the feeling of finding their way in the dark by the touch of their toes. They discover they can remember a tactile experience they consciously overlooked when it happened, preferring instead to navigate by sight. It’s a bravura scene, first for the contrast between her life-threatening struggle to cross a few feet of shallow water, and the ease with which her eager dog happily runs back and forth across the same distance. How did humans ever become so alienated from the natural world in which other animals remain so fully imbedded? At the same time, more subtly yet even more profoundly, the reader’s response proves that we can learn something and know it without conscious awareness, yet be capable of discovering its indelible trace—of ‘remembering’ it—later. This is important, because the very credibility of the story the four narrators, from three generations of a single Nevada ranching family, are telling us hinges on just such a recovery into consciousness of an apparently lost memory.

The title of Jana Richman’s novel echoes that of another, very different book. Yet what concerns her here is not all that different from Al Gore’s motives for writing An Inconvenient Truth. Where Richman’s novel is thin on statistics with which to build an argument, her narrative account of the impact of climate change on those that live in the worst affected areas — human and animal alike — is an emotional prophecy of what lies in store for all of us. If twentieth century literature began with James Joyce arguing that art must transfix the viewer aesthetically and not evoke action, twenty-first century arts, literature included, have taken the opposite approach, seeking to galvanize opinions and modify behaviors. Both Richman and her publisher, Torrey House Press, vocally equate their literary and environmental concerns. Furthermore, in remarks made outside their books, both have argued that their concern for local issues, like drought in the west, should not be seen as parochial; if they don’t quite quote the writer’s advice, to ‘write what you know,’ they implicitly invoke the artist’s right to use local experiences to make universal points.

The Ordinary Truth tells the story of life in eastern Nevada’s Spring Valley, where a handful of local ranchers live a good life of hard work, and have more in common with their peers across the line in southwest Utah than either has with the majority population dwelling in distant, crowded cities. Yet it opens not on the Baxter Ranch, its primary scene, but 300 miles away, on the 22nd floor of an office building in Las Vegas. The first narrator to introduce herself is Kate, prodigal daughter who left the ranch to attend college, studied natural resources, and now works for the Nevada Water Authority, charged with allocating too little water among too many thirsty citizens. The conflicts she faces are intractable, the justifications labyrinthine, the consequences life and death. Kate’s response is to flee, at least in her mind:

I’ll be sitting in my corner office—like I’m doing now—tinted glass from floor to ceiling, watching the sun drop behind the boxy horizon of Las Vegas skyscrapers and anticipating the neon dawn of evening, when for no good reason an image of my father will appear. A cloud, a shadow, a reflection, and there he is relaxed forward in the saddle atop Moots, his palomino gelding, arms crossed over the horn, looking amused to find himself surrounded by glass and steel. Moots stands lazily, his long-lashed lids drooping over soft brown eyes, one leg bent back so my father tilts slightly to the right. Dad holds an easy smile and seems as if he has something to tell me.

Kate is a forty-six year-old woman who, on first encounter, reveals she has never gotten over her first two loves: her father and horses. Both will prove central to the unfolding story, as will the wisdom and courage of Richman’s decision to tackle such clichés head-on. Understanding the conflict that underlies The Ordinary Truth will require getting beneath not only what readers may think they know about the dichotomies of modern life, but getting past the self-serving myths propagated by those who live it without curiosity or understanding. The alternative to Kate’s predicament is introduced by Leona, her mother’s brother’s wife:

Sometimes, when a spring day turns unexpectedly warm and the house feels like an unrinsed plastic milk jug lying in the sun, I set a lawn chair in the fine dirt under the budding cottonwoods on the west side a the working pens and ponder the perplexities a life.

‘Ona,’ as she is known, is a font of such colorfully metaphoric speech. An outsider who married in, she stands apart as the only modest member in a family of free spirits. She has also been in the best place to witness the consuming drama—a violent death and its consequences—that is constantly invoked but never addressed by the entire Jorgensen clan. Her husband, Nate, doesn’t get to tell his story, since all the narrators are women, but he’d probably say that anything he might add would already be covered by his wife and by Kate’s mother, his sister Nell:

A deeply rutted lane leans to the crick that flows between the alfalfa fields and the foot a the Snake Mountains. I caused the ruts by bringing the tractor up from the lower field in a rainstorm. I make a mental note to come out and grade the lane, but I’ll probably never get it done. I’m low on follow-through these days.

Nell’s no-nonsense way of taking things on herself exemplifies the way character can become fate. While Kate’s position with the water authority focuses their conflict, Nell’s iron will drives it. Their mother-daughter struggle is another timeless cliché, spilling over onto Cassie, Kate’s daughter, Nell’s grand-daughter, and the one narrator necessarily more concerned with the present and future than with the past. The bond between grandparents and grandchildren—so often easier than that between parents and children—has drawn Cassie deep into the chasm dividing Nell and Kate. Still in school, barely in her twenties, she combines a twenty-first century, post-Earth Day sense of urgency about her environmentally-threatened future with a fierce, idealistic determination to salvage what she can of her troubled family. She has a plan for doing this, and while it doesn’t work out as intended, her efforts broaden the scope of the novel before finally bringing about a resolution she could never have imagined.

In a sense, the rift that lies buried in the Jorgensen family’s history is an old-fashioned, literary symbol for something far more fragile that lies buried under their land — an ancient aquifer, a layer of spongy rock that has accumulated thousands of years of sparse local rainfall, into which distant populations have decided to drill. In the novel, and in real life, their plan to use this water in ways present supply cannot support awaits only completion of a 300-mile pipeline, already under construction. The politicians view this water as a resource that does no one any good where it is, and can give them a few years relief before a hoped-for, permanent solution comes along . . . or they leave office and someone else inherits the problem.

The error in the city-dweller’s thinking is clear to the ranchers of Omer Springs, who, however, lack the political means to resist. They owe their vulnerability to their own misjudgment, having been seduced away from supporting the liberal politicians who brought other agricultural regions the Tennessee Valley Authority, the Grand Coulee Dam, railroads, highways, price supports, free water, and so on. Listening to the ranchers of Spring Valley happily mock ‘the Liberals,’ older readers may recall how so many westerners traded their votes for the bait-and-switch promises of the Sagebrush Rebellion, a consortium of corporate-scale ranches, farms, and mines that spoke of wanting the same things the families wanted, but turned out to want it all for themselves.

Meanwhile, Kate’s idealistic hope that the pipeline will help, not hurt the situation, is mocked by the man in the next office, Matt, whom she’s known since both were graduate students in geology. She’s watched his idealism wither in the face of adult responsibility, his insight that “the growth of greed and gluttony skids to a halt when the water stops flowing” gradually replaced by the despair of a bedrock recognition of human venality and self-serving thoughtlessness. “Most people,’ he characteristically observes, “hold tight to the belief that the origin of water is the faucet.” Perhaps the only significant character in the book who is not fooling himself is Skinny, the Navajo hired hand who, in the book’s penultimate paragraph, packs his possessions into his truck and discreetly takes off. Nell’s comment, “Going home,” almost aches with ambiguity.

In fact, it is the primary characteristic of all the major characters in The Ordinary Truth that they can spout wisdom and insight and proffer good advice to each other, and do so on almost every page, yet they cannot seem to see their own predicaments nearly so clearly or follow their own sage advice. Whether that annoys you or breaks your heart will depend on whether you view humanity as the victims, or the perpetrators, of their fate.