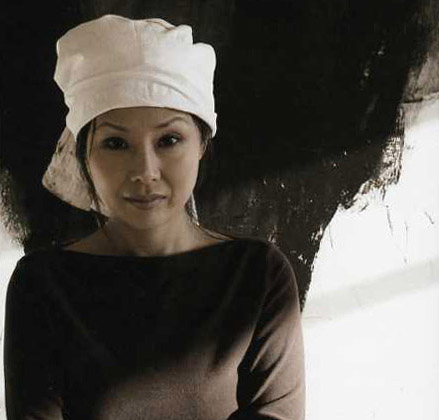 Confronting the paintings of Hyunmee Lee, what impresses is their celebration of gesture and depiction of a nearly unlimited sense of space. Abstract and intuitively painterly, her aesthetic is one of immediacy perpetually seeking its own nature. Her marks as gesture, either as broadly applied brush strokes or swiftly rendered lines applied with an oil stick or a china marker, weave in and out of amorphous fields of paint. Scale is important, and in her recent paintings, the square format of her canvases (either eight foot or one foot) suggests other than merely a window view into the seen world.
The legacy of Lee’s paintings incorporates ancient and modern forms of Asian calligraphy, 20th-century forms of abstraction, including European Art Informal or Tachism, American Abstract Expressionism and the Korean Monochrome movement. She studied calligraphy with her grandfather and by the age of five was deemed the best amongst her brothers and sisters. In Asian cultures, the study of calligraphy is considered an important part of one’s education. It starts in childhood and often becomes a lifelong practice as an art form. The tools of calligraphy – the brush, ink, and paper – are basically the same as those used in traditional forms of Asian painting. In essence, calligraphy is an abstract art, judged as much for its beauty, grace, and energy, as for the single words or characters that the calligraphic ideogram signifies. Lee has acknowledged the importance of her early training in calligraphy and her respect for the Korean Ink painters, including Soe Se-Ok, whose significant calligraphic gesture was important to contemporary Korean artists. 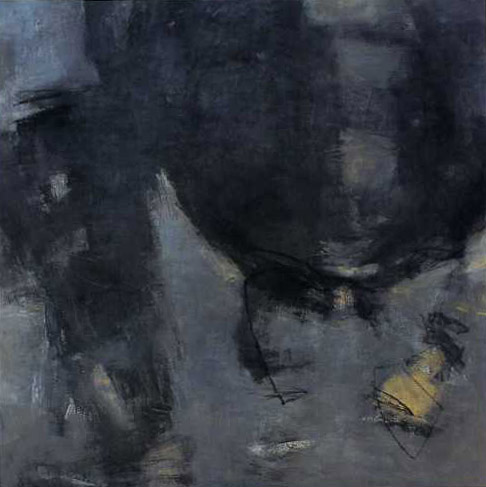 It is important to make distinctions between the arts of contemporary calligraphy and contemporary abstract painting. There are formal resemblances, for instance, between the brush strokes of an Abstract Expressionist painting and the ink strokes of cursive “running grass” script of Asian calligraphy. The French abstract painter Pierre Soulages judged Japanese calligraphy solely for its formal beauty, and since he could not read or speak the language, had no understanding of the meaning of the ideograms, the traditions from which they evolved and the sounds the written characters represented. In Lee’s own study of European abstraction, she was drawn to Soulages’ Black paintings, impressed by the vital force of his abstract calligraphic gesture and the collision and harmony of his invented forms. In her study of the abstractions by Hans Hartung she noted how his powerful calligraphic brushstrokes activate and compress space.

Upon her return to Korea from Sydney in 1991, where she continued her study of Western painting, Lee quickly found herself immersed in the thriving contemporary art scene that had developed in Seoul. She began teaching at Hong-Ik University, joining her mentor Pak Seo-bo, one of the country’s most famous artists and a founding member of the Korean Monochrome movement of the 1970s. “The Monochrome Artists,” the critic Youngna Kim has written, “found their basis in Taoism, espousing an Eastern intellectualism and asserting that they were carrying on with the traditional East Asian paradigm and view of nature.” In his series of paintings titled Ecriture, Pak Seo-bo applied pigment to canvas and then completely covered the surface with pencil lines, so densely applied that his mediums ultimately became one. This became his process of unifying the self with nature, of seeking a transcendental state. In an article that he wrote in 1977 he asserted, “My biggest interest is to live by pure action for nothingness. Like memorizing a chant or meditating, entering a transcendent state through repetition, or repeating the act of emptying myself.” Pak Seo-bo’s statement is in sync with Lee’s, when she declares, “The repetition of making and erasing form is how I deconstruct the existing order to make formless space.” 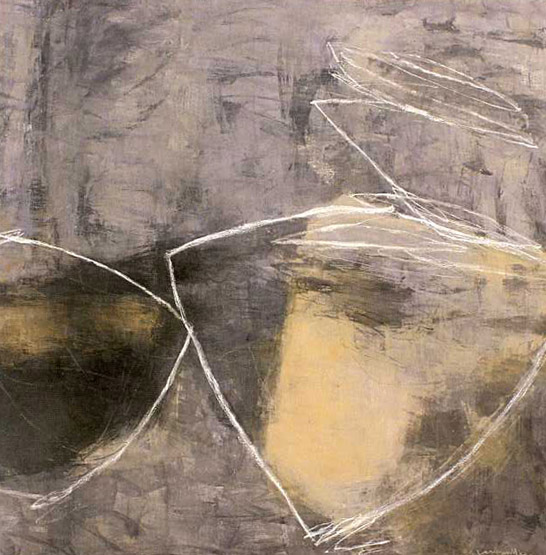 It is their shared Buddhist concept of the vastness of nature, and their quest to find unification within that vastness, that connects Lee with Pak Seo-bo. While visiting Lee in her studio and home in Pleasant Grove, Utah, she made the interesting comment that the Asian view of nature is one of bringing the outside in to the centered self, while in the West, we tend to project the centered self outwards upon nature. She refers to this Asian view of self and nature as “outside sight.” The source of energy that connect the self with all things, including formlessness and nothingness, is known in Zen as Ch’i, a principal source that not only animates Lee’s paintings and drawings, but defines her sense of spiritual identity. She would agree with the American Abstract Expressionist painter Jackson Pollock, who, when asked how his painting referred to nature, famously responded, “I am nature.”

Lee’s recent paintings continue to explore gesture and space. The big 90-square inch paintings that are included in Intimacy without Restraint: the Gesture Paintings of Hyunmee Lee, organized for the Utah Museum of Fine Arts by independent curator Frank McEntire, are complex in their monochromatic tones. Her fields of gray are rich in their variation, some shading to a blue or purple tone, others become almost silver. She has applied the areas of color with large paint brushes, freely laying in broad areas and often creating layers of color. The lines moving across the surface of her color fields are rapidly drawn with oil stick and china marker. They twist and loop in a continuous manner, nervously activating the more broadly swept fields of color. Swiftness of execution is important. The dry media of oil stick and china marker has the advantage of providing a continuous extension of her line, not possible with a brush, which would have to be continually dipped in paint in order to complete a line. In the spontaneous act of painting, it is as if Lee’s fields of color and drawn lines are making the shortest possible route between her mind and hand. 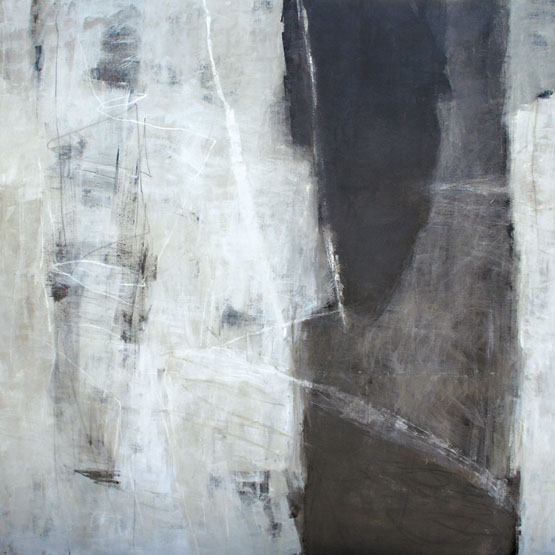 The many small paintings in this exhibition, all being one foot square, should not be thought of as studies. In spite of their diminutive scale and installed on the museum walls as groups, each has its own sense of identity, its own completeness. They are related to a previous group of similar-sized paintings, her series Fragments of Mountains: 90 Days of Improvisation. They are exercises in the balance between action and rest and like Robert Motherwell’s series of black and blue ink paintings on paper (from his 1965 series the Lyric Suite); create counterpoints between action and rest. In these works, as in her larger paintings, the swiftly rendered gesture shares a compositional field of color. The composition and space she explores in these paintings, just as in classical Chinese and Korean landscape painting and in contemporary abstraction, is an invented one. The invented space suggests expansiveness and can, from painting to painting, range in emotional tone from a state of agitation to one of meditative calmness. Her line as gesture, like her own signature, is wiry and boldly free in its movement.

Lee’s expression in the language of abstraction is not a withdrawal from the objective world, but an intense investigation of nature and the subjective self. She has profited by her study of painting in Asia and the Western world, and she has reached a level of maturity in her own painting that will continue to be enriched in the future. For Hyunmee Lee, painting is a process of continual renewal, a tactile and spiritual act of immediacy and intimacy. 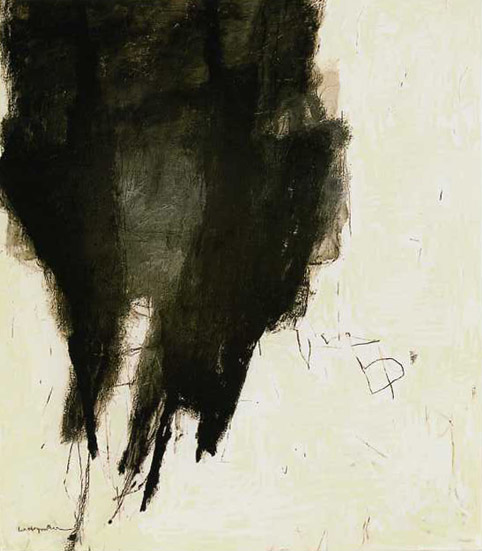 Notes: Quotes from Youngna Kim and Pak Seo-bo were taken from the on-line paper Two Traditions: Monochrome Art of the 1970s and Minjung (People’s) Art of the 1980s, by Youngna Kim, Seoul National University.

Jim Edwards is the Curator of Exhibitions at the Salt Lake Art Center and lives in Salt Lake City, Utah.

Photos for this article were taken from the catalogue for the exhibition Hyunmee Lee: Intimacy Without Restraint* (which continues at the UMFA through July 9th). *Image 4 is from Phillips Gallery which is currently exhibiting works by Hyunmee Lee through April 14. 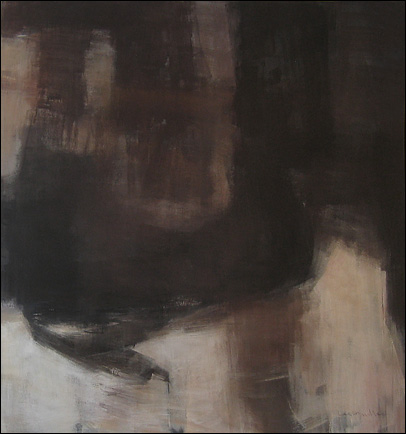