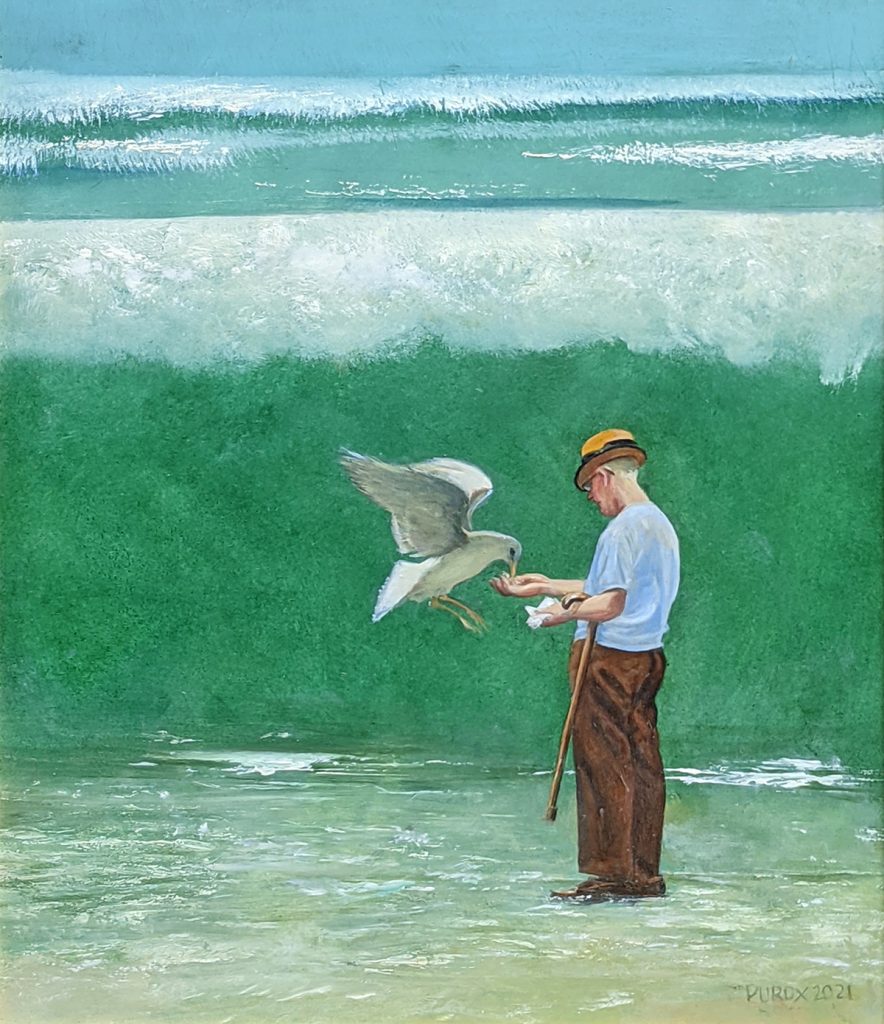 In “Charity,” a clichéd old man — straw hat, glasses, cane, bag of bird seed — stands in shallow water at the beach, feeding a large gull that hovers in midair to take seed from his open hand, both seemingly oblivious to the wave: a wall of water about to break over them both. In “Faith,” another mature male stands with his back to an even larger wave, this time holding at his side his personal Bible — along with a pocket protector full of what must be pens, pencils, and perhaps a slide rule. So the alert viewer looks further and, sure enough, there is “Hope,” in which a woman with a large purse sits, arms folded impatiently, on a park bench inexplicably erected on the wet part of the now-familiar beach, while a wall of water wells up behind her.

Purdy doesn’t seem all that interested here in distinguishing good from evil: there are neither villains nor heroes being identified. Perhaps the wave is just his image of fate — an equal opportunity dousing, not unlike what the banana peel was to Vaudeville. Still, that doesn’t mean he’s not interested in the occasional judgment. How else explain “Romance Novel,” in which a woman with the good sense to remove her shoes before wading into the shallows, and who presumably could be seeking real romance, chooses instead to read about imaginary love.

Others, some curmudgeonly like the “Stubborn Man” whose bench is on fire — at least the ocean will help him there — join the three virtues: the corpulent couple about to start a “Crash Diet,” and my favorite, a lone woman having a “Conversation” with the other, empty end of the bench.

Purdy’s artist’s statement is subtitled “A Short History of Art.” In it, in spite of having his tongue firmly planted in his cheek, he confesses some useful facts. He suggests, for instance, that in spite of a number of men in uniforms, large crowds, and brass bands, his paintings have nothing to do with the great battles that were purported to shape world history; rather, they illustrate events that managed to escape history . . . along with science, natural law, and common sense. There’s a connection between the Utah desert and the equally sandy coastline of Oregon, which explains why so many artists’ lives, works, and shows feature both places. These beach scenes and the funky waterfront dives and busy fishing scenes owe something to both seascapes and lakeside scenes, both of which have figures in Purdy’s nearly a century of peregrinations and observations.

A close examination of the crowds who populate Purdy’s larger scenes reveals him to be more of a humorist than a comedian, with a preference for an older, more venerable narrative form. Storytelling fashions have changed, so that those who seek entertainment in art are served from a diminished menu. Only a few years since Magic Realism stirred wonder into our written and visual arts, something called “autofiction” has come along to strip away that unlicensed imagination. The number of figures in a painting, which often counted hundreds during the Renaissance and the Baroque, especially in works like Bruegel’s “Netherlandish Proverbs,” has been reduced to a handful, while autofiction reduces that number still further by allowing the authors of a story, whether written, painted, or filmed, to make themselves the protagonists as well.

So one of the things that gives a Purdy an antique and antic look is the size of his crowds. These generally seem to be engaged in all sorts of bizarre behavior, but a closer look will reveal that many of them are doing yeoman service as local color who just fill out the scenery. In “Penny Ante,” the four characters playing the title card game, though colorful, are keenly observed figures, while it’s the two dogs, dressed like characters from a Gilbert and Sullivan operetta, who reveal how more than one magic spell can operate in the same place. 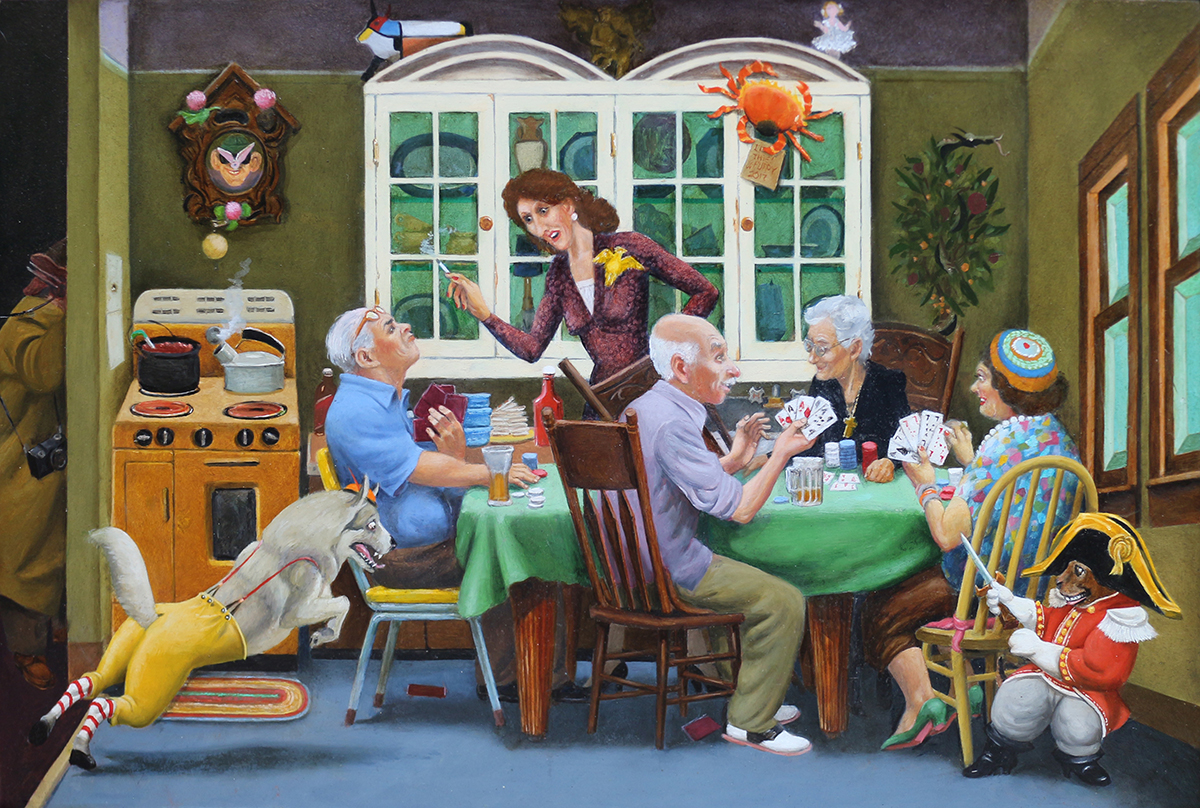 In fact, one way to look at Purdy’s riotous street scenes and garden parties is to suggest that they arise when independent stories collide, like the Keystone Cops crashing through a Hollywood romantic comedy. Purdy suggests this himself, writing of his painted ironies that, “They may not be visually or conceptually whole, because two or three ideas may intrude on the same piece . . .” nevertheless insisting “they are intended to be ‘stories’ that contain location, exposition, conflict and resolution.” Add that the focus of a joke’s audience is usually on the punchline, but Purdy, who must pack his adventures into single vignettes, uses those sought after moments to call our attention to the whole shaggy story, the entire dog’s life.