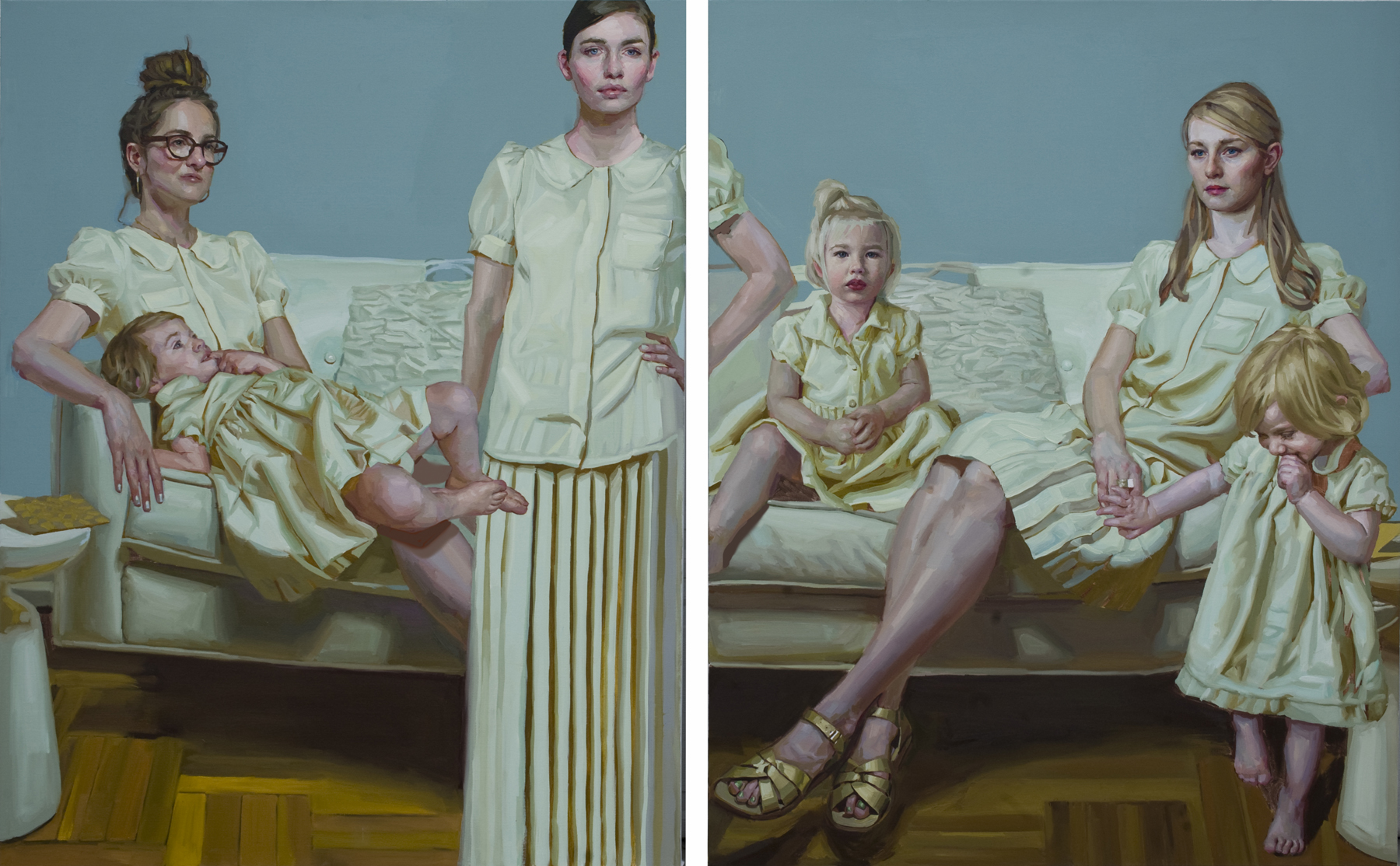 ‘If love is a story we tell ourselves then I had the story wrong. Or maybe passion is just, and always, a wrong-headed thing.’ — Anne Enright

Either it’s becoming increasingly evident as we learn more about our species, or at least it’s become part of the myth of our time, that the things we think we know are parts of a story we tell ourselves, best taught and learned in yet more stories. If love is a story we tell ourselves, then surely so is family, and right now arguments rage about both. Who should we love? Who can we marry? Are families made up according to ideal structures, or do we have the power to make a life—and to create ourselves—in accordance with our own vision? These questions may have no permanent answers, but they come into focus in something that bids fair to go on forever: the anxiety that assails and bedevils the young as they learn to make their way in the world.

Contemplating the thirty or so paintings, sketches, and drawings by Mary Rose Sauer currently on display in the Gittins Gallery, one tries to keep in mind that this is an MFA thesis exhibition. Presumably, each individual image represents a lesson learned, or partial proof that Sauer is ready to assume the artist’s mantle. Yet she came to the U of U already fledged, following a stint in the studio of the world’s most successful artist, Jeff Koons, where she daily breathed a rarified atmosphere most art students will never even sample, and while graduate students usually do scutwork for the faculty, she’s already taught advanced figure drawing and boasts a list of awards and honors that include a purchase prize. How many degree candidates have to borrow one of their thesis paintings back from the permanent collection of the Springville Art Museum?

Furthermore, and to a degree that cannot even be said even of many professional exhibitions, Sauer’s evocative depictions of individuals and intimate groups immediately bring to mind a rich swirl of fully controlled, metaphorical associations. Her figures and their complex surroundings, rich with hints and signifiers, initially suggest portraits, but not like any portraits one has seen before. While their strong visual presence argues convincingly for the reality of their specific references, they seem to tell the viewer things about their subjects that no one would voluntarily permit a portrait to reveal. Posed among what appear to be prized possessions chosen to project the sitters’ own sense of identity, these persons nevertheless often seem unsure of themselves: fragile, hollow even, in precisely the spot where one would expect them to project confidence. 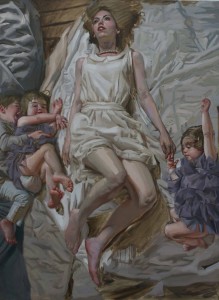 And indeed, they do not depict actual sitters, in spite of the unmistakeable appearance of the same countenance in adjacent canvases. Rather, Sauer does something painters used to do in other circumstances—in history paintings or other painted narratives—and which can still lose a novelist friends: she has selected fragments from the various iterations that are available to her and assembled them into credible characters, who enact vignettes of life as she and her contemporaries experience it. Their evident preoccupations are actually hers, and the paintings are like confessions dwelling in the zone between creative non-fiction and allegory. Everything she paints is rooted in her own life, and it is the conviction of memoir—along with her complete knowledge of visage, anatomy, props, and setting and considerable technical skill—that gives her visions their anecdotal power. At the same time, everything about them, even those bringing together mothers and their children, feels cold and austere. The surface is idealized, and her accomplishment is to render that surface so thin, so translucent, that we can see the desperation seething just below.

It’s not clear whether Utah has a more materialistic culture than is typical in America. Nor is it settled how much local life is finally influenced by religious values. That said, these paintings do recall those of Northern Europe during the Reformation, when artists took advantage of moralizing spirituality to elaborately depict material abundance. Unlike those judgmental exercises, and also unlike the Photorealist painting of the 1970s, which reveled in reflective surfaces that mirrored and multiplied physical and sensual opulence, Sauer’s canvases display deep, yet unresolved misgivings about their subjects’ relation to material possessions. On the one hand, the settings include strong contrasts between classy, relatively sparse decor and messy, lived-in areas possibly more faithful to how local families actually live. On the other hand, a viewer will find almost no variation in body types and styles of dress. Far from representing a kind of stage setting, a proscenium arch before which the variety of humanity may play out their dramas, it’s as though what might be the background in another artist’s work has assumed the role of subject matter here. In “Sara,” which won the purchase award in Springville, shelves behind the title figure present a purse, a pair of dress shoes, two ceramic owls, a teacup, and what looks to be a pair of rabbit figurines. This odd assortment could only have been assembled by someone wishing to make her identity and values visible, yet they add up, at best, to a superficial presentation, and Sara’s expression, comprised of resignation inadequately leavened by almost bleak hope, seems to admit that this is all she knows for sure about herself. In “Release,” meanwhile, a mother and two daughters have fallen asleep amidst dolls and accessories, as though only running in place until they drop from exhaustion can carry them from daydreams to real dreams, safely averting the moment of recognition and return to the challenges and disappointments of real life. 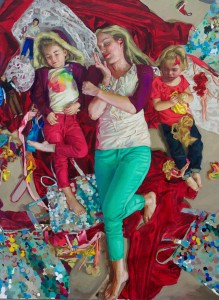 Another possession Sauer calls attention to falls outside many observers’ definition of property. During the Renaissance, painters included dogs in portraits of couples to symbolize fidelity: art historians point to the universally-recognized example in the van Eyck painting known as “The Marriage of Arnolfini.” Several of Sauer’s subjects include a dog among their emblematic possessions, but here in the absence of a romantic partner, and in much closer juxtaposition to her. It may seem obvious that these companions stand in for children, but Sauer insists that in this she only copies real life. The role of every woman as mother and caregiver is a given—‘taken for granite’—in her community, while a nascent unreadiness to accept such narrowly defined roles has sown uncertainty among her contemporaries. For some, teaching and caring for others’ children provides an alternative. Others, like the woman in “Goals,” or Maddie in her ‘Dollhouse,’ have their pets.

As a painter, Mary Sauer cites influences from nineteenth-century artists like Mary Cassatt and John Singer Sargent: painters whose work, while remaining realistic, trended away from photographic representation in favor of surface treatments that balance cognition with feeling: you know them when you feel them. But just as she enriches her work by studying earlier artists, so she chooses not to limit herself to her personal knowledge of human nature. Alongside a plethora of artists, she also cites the twentieth-century findings of researchers like Brené Brown, whose themes include shame, vulnerability, courage, and authenticity. It’s no accident that the figures Sauer depicts are women, nor does being a woman herself adequately explain it. Rather, her understanding of her moment in history includes the notion that it isn’t just for the girls who dwell in it, but for all humanity that this is a crucial moment. It is no accident that major religions, great nations, and venerable institutions the world over are all struggling to identify and define the rights of women at the same time. Young women today face two challenges: to become adults in their own bodies, and to contribute to defining their roles in their communities. These challenging tasks may also take shape in the metaphor of art, where the figures an artist creates play a role in the composition, color values, visual balance, and propulsive energy of an individual work—qualities only recently relegated to the past, but now being recognized as still valid—and at the same time the work of art, as a whole, plays a part in a larger human and historical drama. 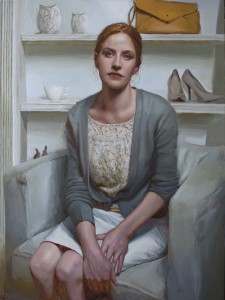 It might further be noted that among the targets of her concern, the artist counts the impact of social media on her peers. It must be included among the ironies of modern life that just as society was learning to recognize and counter the too-often negative influence of peer pressure, the purported digital revolution created a whole gamut of new ways for groups to put powerful pressure on individuals who fail to conform to ambiguous and anonymously imposed standards, while the victims of these assaults stand virtually without recourse. While the artist has yet to include computers, cell phones, or other specific references in her evolving catalog of significant objects, the anxiety her characters reveal has a universal quality that could as well stem from Facebook as from the playground or the pulpit. More to the point, her chosen medium, painting, with its reliance on individual, essentially one-on-one connection instead of broadcast, its use of metaphor in place of imprecation, and its employment of irony rather than sarcasm, makes the case for art as the better medium of discourse. Here the viewer is anonymous, free to read the work as she sees fit and to accept or reject how it represents the world, while it is the artist whose name and reputation are on the line.

Mary Sauer’s The Pressure of Perfection is at the Gittins Gallery in the University of Utah’s Art & Architecture Building through July 30.