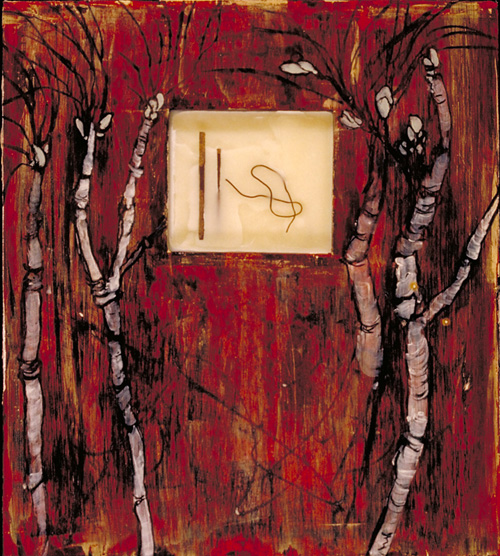 Last month, I attended the opening of Koichi Yamamoto’s exhibit at Saltgrass Printmakers. At one point, I was outside listening to the acoustic quartet that was playing in the printshop’s one-car parking lot. Sandy Brunvand, co-founder of Saltgrass, was standing to the side of the quartet (her husband Eric was on stand-up bass) swaying to the music and singing along. At the end of the number, she announced more wine was needed and started inside. Almost imperceptibly, though, she hesitated, stooped down, picked something up from the ground, examined it, seemed pleased, put it into her pocket, and recommenced her wine run.

I’m not sure what it was that Sandy picked up, but you may find it in one of her new paintings or multi-media works on display this month (opening June 16th) at Art Access Gallery. Brunvand’s show, along with an exhibit of woodcut prints by Blanche Wilson, will be the last at Art Access’s Pierpont location before they move to their new Artspace location on 5th West. 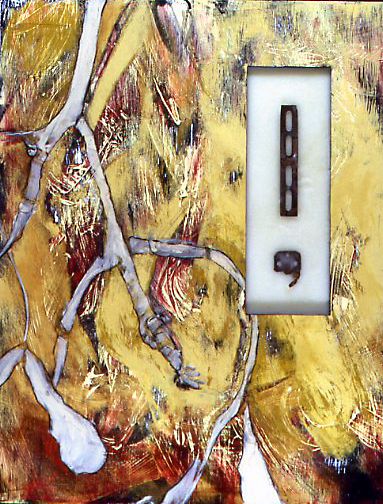 There is something appropriate about Brunvand’s work showing in the old gallery before it is tossed aside for newer, larger digs.* After all, her works incorporate a lot of things tossed aside. For some years now, Brunvand has been incorporating trail detritus into her work. During her daily hikes into Salt Lake’s foothills, she began collecting rusted bottle caps, small rods and plants that she found on the trail. “The bottle caps,” Brunvand says, “crushed, folded, and rusted look like beautiful miniature landscapes. My initial thought was that I would use the rusty metal as the subject of paintings and create observational landscape paintings from them.” So she began foraging for rust and soon her car was full of “fascinating junk.”

But instead of making paintings about the objects she collected, Brunvand began using the rusty metal itself as a material in her paintings. She embedded them in beeswax, which, she says, “has wonderful translucent, organic qualities of its own which I have been drawn to in my recent works.” 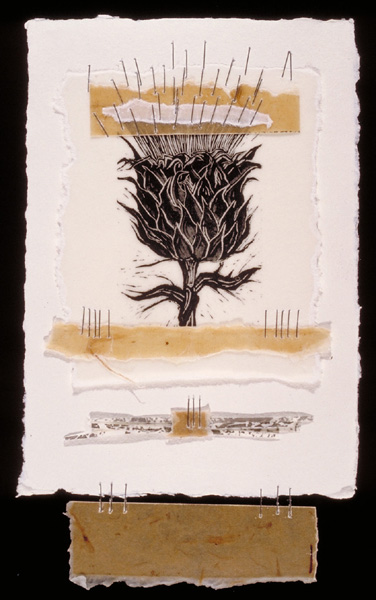 Brunvand starting looking at rust everywhere. On a trip to Washington D.C., she noticed that the rust there was different than what she found in the foothills of Salt Lake. “There were rusty bits of metal all over the National Mall, but they were subtly different . . .The Washington rust tended to be small twisted bits of wire, probably originally holding temporary fencing in place. But, the similarity of the rusted metal detritus and the quality of the shapes and forms was intriguing.”

Her Washington experience gave her a mission, and on a recent trip to Paris she began looking specifically for rusted detritus, and once again was delighted by the similarities and the differences. “In the square in front of Notre Dame I found my old friends the rusted bottle caps (also some champagne cages that held corks in place – how French!), but because of the crushed stone in the square, they were washed in gray tones rather than the red/brown dirt of the foothills.”

As one might expect, Brunvand’s paintings are very earthy. Generally created on a hard surface – birchwood panels – they involve a great deal of surface treatment – painting, scraping, sanding, layering – and, in the case of her “niche” paintings, the inclusion of her found objects. In the niche paintings, we see layers of pigment and texture crisscrossing the painting’s surface. In the center is a “niche” of beeswax containing a small piece of detritus. “By placing them in positions of honor in the niches of my paintings,” Brunvand says, “they become icons representing time, intrusion, nature, evolution, and place.” The works seem to be about observation. Brunvand has extracted an object from one ground and highlighted it within another ground. In the original ground the object is hidden, camouflaged, unremarkable. In the second ground, the object has become iconographic, but Brunvand’s delightful attention to the treatment of her fabricated grounds makes ground and object artistically separate but equal. 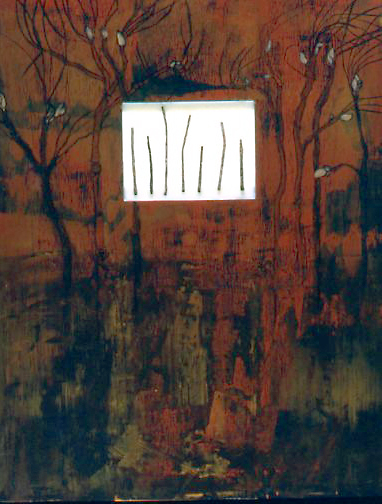 Metal objects and translucent materials have found their way into Brunvand’s other main body of work –her printmaking – and in the process have called into question the nature of the work she is doing. A couple of years ago, Brunvand first introduced a layer of translucent paper to her prints, an attempt to allow the viewer to see the information below a layer. “I was trying to create a history of line underneath the layer,” she says. Brunvand’s recent “prints” have included a lot of extraneous material – translucent layers of paper (Japanese mulberry paper or Bhutanese paper), staples, scraps of paper from relief prints, and beeswax – surrounding, laying on or hanging from the print itself. This working on and with a pulled print breaks with the orthodoxy of printmakers. “I often get caught up in the traditional ‘ethic’ of fine-art prints,” Brunvand says, “by which I mean that traditional printmaking involves pulling each print from direct contact with a matrix and not amending by hand afterwards. A fine-art print edition is traditionally supposed to strive for each print in the edition being as similar as possible. My new pieces go beyond that self-imposed boundary. They allow the prints, wood engravings and woodcuts, to continue beyond their first incarnation. It is a way to give the prints another voice, possibly a more inquisitive voice.”

The prints have taken the place of the small found objects in the niche paintings. They are the central focus, a dominant and consistent aria surrounded by shifting choruses of paper and materials. Each work, thus, becomes an original image while retaining the multiplicity of a print run. The print is like the niche objects in another way in that they are almost found or recycled objects. “In this series, I am using three woodcut images I created previously and three wood engravings that I made for Justin Diggle’s U of U miniprint portfolios. It has been great utilizing these old matrices, almost like seeing old friends, giving them a new life.”

Visit the Pierpont Art Access Gallery this month one last time and you’ll be able to say goodbye to an old friend while witnessing the new life Sandy Brunvand is giving to her printmaking as well as the bits of metal we leave behind, whether on the trails of our own backyard or the front yards of capitols, foreign and domestic. 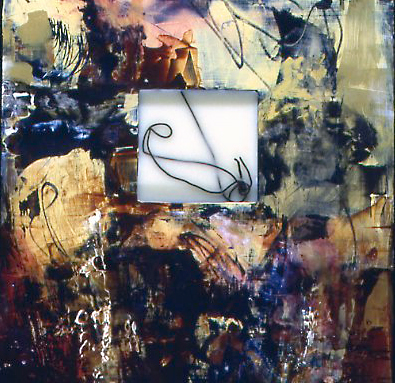 * I realize that “tossed aside” is too harsh a term. The Gallery is merely taking advantage of a larger space. But I know Art Access’s Amanda Finlayson likes to write letters to the editor and I thought that might get her blood going. Plus it helped with a transition.