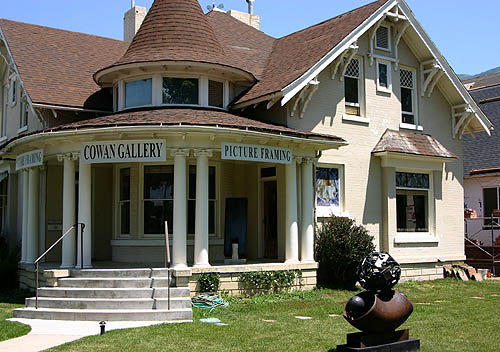 It was July 4th and Lee Cowan and his family were at their home in Los Angeles when a driver in a drive-by shooting crashed his vehicle into their front lawn, bleeding from a gunshot wound in his neck. That was the day the Cowans decided to leave California and return to their home state of Utah. Four years later, almost to the day – July 3rd — Cowan opened Cowan Gallery in Springville, “Utah’s art city.” 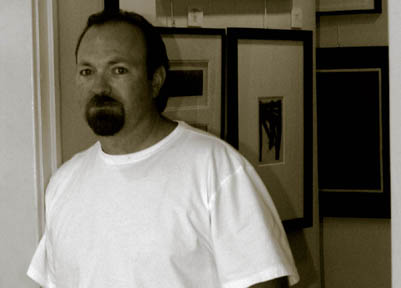 Cowan originally went to Los Angeles to study art at the Pasadena Academy after earning his bachelor’s degree from B.Y.U. He stayed on in Los Angeles after graduation — until the Fourth of July surprise, that is. Upon his return to Utah, Cowan initially opened a gallery and frame shop on State Street in Orem and remained there for three years. But when Springville Museum of Art Director, Vern Swanson, invited Cowan to move the gallery to its present location in Springville, just blocks from the museum, Cowan was taken by the space – an historical registry home — and decided on the move.


The home and its architectural features are very turn-of-the-nineteenth-century, but the art inside comes from the turn of this century. Cowan says that Swanson wanted Cowan’s gallery to come to Springville because the modernist and contemporary works it shows are exactly what Swanson doesn’t want to have to show at the Museum. The Cowan Gallery provides a contemporary venue in an art city dominated by realist and figurative art. 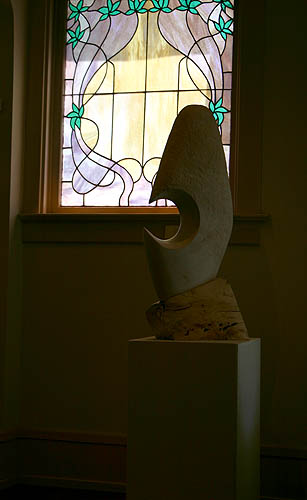 Cowan doesn’t have a driving force or ideology when it comes to showing artwork. It is all about his personal tastes. He chooses works and artists on “purely personal aesthetics. I love modernism,” Cowan says, describing his aesthetic interests and what has shown in the gallery. “I’ve had some people that are purely conceptual . . . If I’m going to be surrounded by this work every day it’s going to be something I can see a promise in; I can see a future.”

Cowan does custom framing in the back of the gallery and also teaches at Utah Valley State College. These endeavors provide him a financial foundation so that with the gallery he can pursue work that interests him and in which he can see a future. Cowan is also happy to be a launching pad for artists careers, eagerly searching out young artists. “I’m looking for people that show promise, that need that first step,” he says.

He is even willing to provide the cash incentive for that first step, purchasing artwork by several of the artists he shows. When Trevor Basil, a BYU MFA student, came in for the first time with a piece to show Cowan, the gallery owner’s quick response to the hopeful student was “Great, that’s mine. Now what else have you got?” Basil works in oil pastel on paper, creating the works through a reductive method of layers of the pastel. After Cowan’s surprising announcement, Basil had to return to his studio with more work, some of which has also entered Cowan’s collection.

Cowan is also taken with Michael Porter, an artist with a studio in Blanding who creates all ceramic work – down to the flanges and screws – creating artifacts that reference the now outsourced U.S. Industry. He also shows Ryan Bown a conceptual artist who creates “pointillist” works using the colored ends of Q-tips. 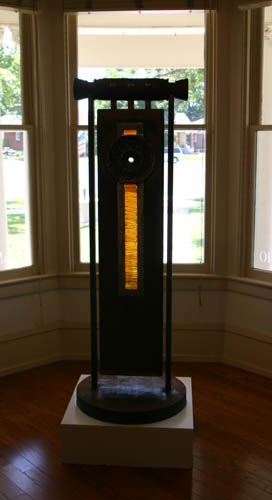 Currently, Cowan represents only a few artists. He plans to eventually represent 24, but only 24 — “to give them the opportunity to show in a gallery space at least once a year.”

Many gallery owners are anxious to corner the market on an artist, to get their initial investment back. Cowan is happy for his artists to show other places, to increase their exposure. And he realizes that ultimately the artists will have to go to galleries outside the state to show their work and he is fine with that. “If I’m known for nothing more than that first step, I’m happy. I’m content.”

But Cowan is not only content to hang some pieces on the wall or on pedestals. He sees a lot of untapped potential in Springville and Utah County and has projects that he wants to see change things. He wants, first of all, to quickly get beyond Provo’s parochial First Friday show. The Provo Arts Council’s monthly exhibit opportunity is limited to the downtown area of Provo (which in Provo is a three block radius) and excludes such places as the BYU Museum of Art and the Woodbury Museum at UVSC, not to mention other art venues in Utah County. Cowan thinks Utah County needs to form a larger network of galleries and museums to hold openings. He also wants to see an arts festival, a “pure arts festival,” in Utah County.

Cowan also knows that his own adopted town of Springville is bursting with possibility. He points out that 212 people from Springville have contacted the Springville Museum as artists. And he thinks that is only about 50% of the artists out there. Many of them, he believes, outsource their work from Utah. He wants to get the artists out of the woodwork by holding locals only shows, and the first step toward this was a the Springville/Mapleton Art Open which is currently up and continues through October 13th.

Chances are no wounded drivers will be crashing into the Cowan Gallery lawn any time soon (and they would have to get through sculptures by Brian Christensen and others to do it). So we expect Cowan Gallery to become a long time fixture in Springville, bringing the “contemporary” to “Utah’s art city.” 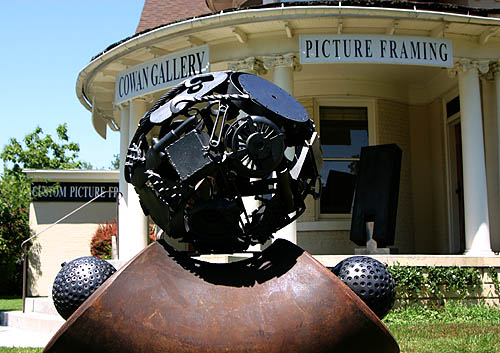