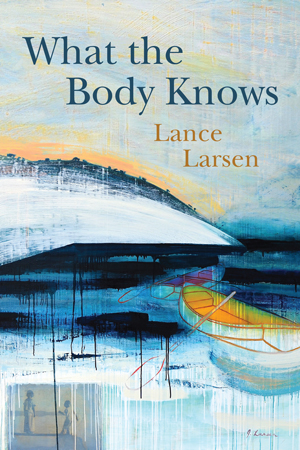 The epigraph to Lance Larsen’s new collection of prose poems is attributed to Paul of Tarsus: “Everywhere and in all things I am instructed both to be full and to be hungry, both to abound and suffer need.”

Evoked, of course, is the ever-famous notion of negative capability gifted us by Keats, where one is “capable of being in uncertainties, Mysteries, [and] doubts, without any irritable reaching after fact and reason.” Amateur poets ever-strive and often-fail to dwell in, delve into, or exercise this capability in any meaningful way in the space of a few stanzas. Aesthetic theorist John Dewey in his Art as Experience might chalk this up to inexpert huntsmanship of the muse, where one’s creative impulse “may be stirred, and yet be as irrelevant to the act of perception as it is to the action of the hunter seized by buck-fever.”

Furthermore, Dewey attributes a certain physicality to the writing of good poetry. Only experienced poets who do not permit the muse “to diffuse itself at random through [their] whole [bodies],” but rather control and monitor their physical response to inspiration, are able to avoid confused and distorted perceptions that will prevent their treating an intended poem with the complexity of thought that it deserves. In this way, writing is more than the metaphorical flexing of a practiced muscle, but the steeling of one’s self in states of uncertainty. All of this to say that, lucky for us, Larsen is an experienced poet, and the musculature binding the collection is obvious.

But two things should be made clear about these outings into academics:

First, that they should not be assumed to be derivative of Larsen’s work, which unlike all things scholarly, transforms the ways we associate inspiration with the intellect. In fact, the wonder of this collection comes not from artifacts of knowledge, but in the exhibition of differing modes of processing knowledge—both mental and physical.

Second, that it is easy to hide behind jargon, and perhaps I am trying to shield myself from any accusation of taking the title too literally, which is typically an obtuse way of thinking about poetry collections. Nevertheless, it’s true—I think physical knowledge is the shining star of What the Body Knows.

(This revelation surprised me somewhat, since Larsen as Professor tends to edge around discussions of poems containing topics intimate or carnal, often coyly proclaiming his pure-mindedness as justification. Not enough to say that the poet, former Poet Laureate of Utah, is a prude or moralist, but enough that the deeply sensual nature of this collection raised my eyebrows once or twice.)

Of course, the mental and verbal play we have come to expect from modern poetry is anything but absent in these prose poems. In “Almanac of Sighs,” the very first poem in the collection, Larsen’s dexterity in this intellectual-linguistic mode of knowledge is on full display: “Arm chairs sighing, old cars and young mothers sighing, graves sighing both before they devour the dead and after,” capture the reader’s ear in the best way—not with a shout, but a whisper. The lines work as monuments against vain repetitions, the sighs of beets somehow never being the same as the sighs of crucifixes.

This mastery of repetition and nuance extends to different ways of looking at scarecrows, water, and, in “Ladder Poem,” the metaphorizing of progress: “Clocks are a ladder we lean against tomorrow today. Lay a ladder over a chasm, you have a bridge.” If you further ladder Larsen’s technical skills, tonal regulation reigns in “Valentine Poem Written After Learning of a Tragic Mishap in a Local Cave,” in which the speaker loves his valentine “like the country rescue team using oils domestic and lubricants industrial, not to mention a portable winch, which also failed, breaking ribs and almost snapping [a] neck.” Somehow he wrangles catastrophe into deliberation of the fortitude required by, and resulting from, a union. And while form is a rung considered less often in the technique of prose poems, of note are the four Q&A poems, which are used to great effect to deliver anecdotes and delineate interrogations, and sometimes, to interrogate again.

Nothing will be missing for the reader who picks up these pages wanting to fill out some of their gray matter. Larsen is clearly expert in and worshipper of the versatility of language. But like all good linguists, he is also quick to acknowledge the limits of knowing and communicating verbally. Early on in the collection, “Translation 101” juxtaposes words said with words meant, introducing a sort of futility into a sincere prayer for forgiveness. A sad summation of linguistic speech act theory, that except in the case of practiced scripts—“Will you pass the salt?”—we aren’t guaranteed any capability to interpret each other’s desires. This is dramatized in “Driving the West Desert at Night”:

“Tell me a story, she said, meaning don’t you dare drift off, I need a voice to help me keep my hands on the wheel, a little narrative to convert breaths into miles. Shall I add a deer, he said, meaning an iconic buck on a cliff. Deer are clichés, she said, how about birds, meaning the way they keep re-inventing their wings.”

It is easy, perhaps because it is hopeful, to assume that the driving companions will understand the implicit utterances shared with each other. Later in the poem, one of them speaks, “meaning he knew not what,” and loses his own understanding of their conversation. So how is the other to know? She does not. He does not. Whatever they might have disclosed in secret is cut, vulnerable as a single thread.

Even in instances with clear contextual cues, like a religious pulpit, the intellectual-linguistic mode of knowledge is easily contaminated, easily misinterpreted. The phrase “All Puffy and White, Goldish, Harpy and Angelonic,” as one narrator points out, could be a description of heaven, or a “white hell in which [a man is] forced to sacrifice his own sled dogs.”

But Larsen gives us in many of these poems an antidote to the failures of intellectual knowledge and all miscommunications of that knowledge. For Larsen, that antidote lies in the physical.

All poetry relies on sensual reference. Poets are meant to “translate the world through their bodies… [to] reinvent it in language,” according to poet and critic Kim Addonizio. But Larsen invites the reader not only to feel with the body, but to know with it. This act of directing a poem by physicality rather than through it, of attributing reason and knowledge to the body itself, is a radical expansion of the sensory center we desire of modern poems.

Larsen’s narrators gain and display physical knowledge with great frequency. The “yeasty amens” of a horse’s nibbling a hand makes a man invincible (“Horse Hands”). In “Girls in Trees,” worries of what the “de-girlization might do to this planet” consume. (Spoiler: just because the girls sit in trees doesn’t mean that they, too, are a renewable resource). A “Green Hut from Topaz” has its own muscle memory from its time in a Japanese internment camp—it “has never heard of Hari-kari or kamikaze pilots, but can taste honor in the air.” A mother forms “all contracts maternal” while nursing her newborn (“Blood on the Ceiling”). Voodoo—most earthly of spiritualities, that touch-and-be-touched deal, appears in several poems where characters inflict and are inflicted. We are reminded that it cannot be denied that our bodies contain knowledge, which we often misattribute to the pathways of firing neurons. Severed at the stem we would still know some things—to jump at something that looks like a snake in the grass. To protect a small thing. To lie down when it’s dark and rise up with the sun.

It is in this mode of knowledge that a new form of negative capability is created, where what the body knows and what the mind knows are at odds. “Because we can process the same bit of the environment in two different ways,” wrote Jenefer Robinson, professor of aesthetics, of this very phenomenon. “It is possible for us to believe contradictory things simultaneously about it.”

The contradictions resulting from both modes of knowledge check each other from veering too far into nostalgia, or dream, or even grounded-ness. The body says “In Dreams of Old Girlfriends”: “just once I wish her red ants would picnic with my black ants and mean it.” The mind says—“they love me, these old girlfriends, but from a distance.” The ‘60s personified knew a young boy “perfecting [his] dead man’s float,” but perhaps knows him even better losing brain cells “during acid flashbacks” (“To the Sixties”). The body and mind keep secrets from each other at times, the secret of a signature written on a back, the secret that women—neither allowed to be sumo wrestlers, nor enter a sumo ring—will be warriors and protectors anyway. The mind that wonders if worshipping “sweet decay” is a righteous prayer housed in a body smitten by moldering mushrooms, and the funk of stables (“All Things Earthy, All Things Quag”).

In an age when it feels so surprising to need to cling to reason like a lifeline, What the Body Knows brings a welcome respite, a welcome balance between component parts of us brain-heavy human beings. Don’t tip over, it says, with its physicality that welcomes the reader like a cradle. It is possible that those readers particularly susceptible to hypnosis, psychic transference, or abduction should beware lest Larsen’s work snatches them from their own bodies, lest they taste the pears and apricots he tastes, or see his old girlfriends in their dreams.

Lindsey Keller is an MFA candidate in fiction at Brigham Young University, exploring feminist existentialism. She is an editor at elsewhere magazine, and recipient of the Academy of American Poets’ Prize.