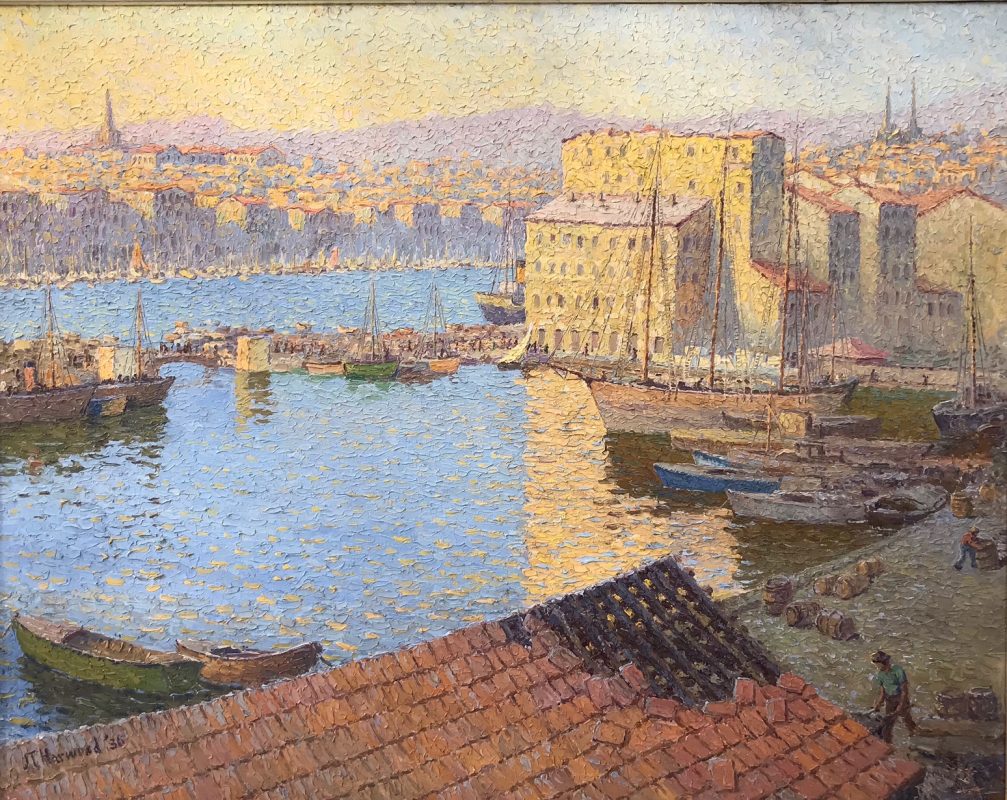 Controversy has erupted over the Logan City School District’s decision to sell 11 paintings by regional artists apparently purchased through a program of early arts champion and Utah state representative Alice Merrill Horne, whose 150th birthday was celebrated Jan. 2. She helped 37 school districts and libraries across Utah begin their own collections of original work by regional artists so that students could experience fine art firsthand. The statewide investment started with nickels and dimes — milk money collected by Utah children in the 1930s for art that is now worth millions of dollars.

Giclees are being made of the 11 works being sold in Logan to exhibit in the schools, and funds raised will go toward conserving the remaining 30 “lesser” works in the collection and to send students on field trips out of state to view art – not to support football, says Logan City School District Superintendent Frank Schofield.

Artist and gallery owner Karen Horne, the great-granddaughter of Alice Merrill Horne, was not happy when she learned of the sale and went with a group on Friday to David Ericson Fine Art, where the works are on display prior to a Jan. 31 auction:

“We saw that the works plucked from the collection are top-tier – including a jaw-dropping large Harwood harbor scene, a huge Millet copy done by Harwood right in the Louvre, a lovely early LeConte Stewart [1924, that Ericson says will go for $80,000-$100,00], a powerful Birger Sandzén [an atypical oil by the Kansas watercolorist who taught at USU for a time].” There’s a Moser and a Phillip Henry Barkdull, too.

The sale, Dave Ericson points out, for which he is getting a 10 percent commission, also includes a Minerva Teichert, “The Spinner,” with an 8-inch tear in the lower-left corner that he is sure the artist sewed together herself (another Teichert from the collection, worth $500,000, is on loan to the Utah State Capitol); a Waldo Midgley with a big crack in it; a Mabel Frazer with two repaired pencil holes; “and the excellent Gleaners painting, the Harwood copy, contained six pencil holes and the entire sky and most of the foreground had been overpainted. “That was hanging in the art teacher’s room,” he says. “The professional restorer successfully took off all of the overpainting [and repaired the holes but found four more to fix]. Most of the paintings had coal soot on them. They hadn’t been cleaned or touched in 50 years. The Birger Sandzen was so gray you couldn’t see any color in it,” he says. “All the works were bubble wrapped and so were unharmed but they were sitting on a soaking wet carpet in the new addition to the library,” adds Ericson. “No one realized it was leaking. I had them moved.”

Clearly, he says, “the district was unable to care for these paintings and is doing the responsible thing by putting them up for sale.” The gallery is accepting bids through noon on Jan. 31.

Horne, however, maintains that, “Alice’s work is being dismantled without what I would consider due process. If there were problems securing the artworks and restoring them, then they should have first been addressed by other means than liquidation. I feel this sell-off of the school’s heritage should not happen casually, and without serious examination or protest. The works should also have been offered to other state agencies and public collections before putting them up for sealed-bid public auction which encourages rampant speculation, flipping by other dealers, and dispersal into private hands. . . .This purely commercial handling of this school collection makes me sick.”

Katie Lee-Koven, executive director and chief curator of Utah State University’s Nora Eccles Harrison Museum of Art, concurs. In a letter she read to the Logan School District Board on Tuesday evening during a meeting in which the group agreed to hear eight members of the public comment for 3 minutes each on the matter, she said if the board had sought their input, they would have offered the Museum’s deaccessioning policy and procedures, which she enclosed; would have suggested things like plexi “covers” to the front and security hardware to the back of restored artwork and rotation for display as well as a fundraiser to pay for conservation costs. She said that another local institution could acquire the works, care for them properly and offer educational opportunities to Logan City schools “so that kids still have access to them and learn from them” and also offered the Harrison to provide educational resources and lesson plans for teachers across various disciplines to “help them consider how to incorporate the use of these artworks into their lesson plans.”

These, she said “are the kinds of things that we can offer and while we wish the school district board would have reached out to us before, my hope and the hope of others here is that it is not too late.“

Ericson points out that every school in the state of Utah has this problem to a greater or lesser extent and says people should have been involved with the issue 50 years ago. “We really have very few museums in Utah and the state has no money to buy these major paintings. That’s the tragedy. The money from the sale is all going to the Education Foundation in the district, and it’s my job to see that they get the most that they can get out of it. What’s great about this is the discussion and what people are doing. The PTA and all of us as parents should be finding ways to do it.

“The public has 30 days to find people to bid and buy the paintings,” he says, adding that he wanted the artworks brought to Salt Lake City to broaden the scope of people who are looking and bidding. “We hope the State of Utah considers having an art museum. The best thing they can do [with the school collections] is put them in a public place. It’s us being responsible for our assets,” Ericson stresses.

The Utah Cultural Alliance has turned its focus from a successful campaign to save middle-school arts education to the Logan situation, with a petition (currently with 500 signatures) that was presented at Tuesday night’s board meeting by Laura Gelfand and will be left up until Jan. 31 or a bit after. Signers are asking the Logan City School District to immediately halt the sale of their collection and to work to find a solution that keeps the collection accessible to the public and properly preserved and stored. The petition is found here: http://www.utahculturalalliance.org/lcsd-art-collection

It’s suggested on the petition that the works be loaned or donated to Nora Eccles Harrison Museum of Art, Springville Museum of Art, Logan City’s new library, UMFA, Capitol Preservation Board, Utah Division of Arts & Museums or expanding the new Logan History Museum to include art.

Crystal Young-Otterstrom, executive director of UCA, says, “We are concerned about all the collections with all of the school districts and libraries. We’ve heard that some of the school districts have seen dollar signs after Logan and we are sending a letter to superintendents and school boards statewide detailing that selling these pieces is unethical because it violates the intent of the schoolchildren who donated the art.” The UCA letter also suggests giving artwork to museums in the district to restore and offers information about a number of specialists and curators who can give advice on how to store, restore and display them. “And we’re also looking at some more permanent options that may keep these from sales as well,” she says. “Gallery owners need to be thinking about the fact that this glut of Harwoods and Tiecherts just lowers the value for everyone. Other galleries are bidding on this sale right now. Some have good intentions of keeping them publicly viewable. But the majority of us don’t’ want to see these go into private hands. We want all school districts to know that we are watching and want to offer ourselves as a partner.”

Other speakers before the Board were Scott Bushman, from the Cache County Historical Society; Marissa Vignault, USU art history professor and parent; Glen Edwards, local artist and retired USU art professor; Barbara Edwards, local artist; Nadra Haffar, former NEHMA education curator; Karen Horne and her sister Bonnie Horne Schroader, a former Arizona school board member familiar with funding and budget issues who requested that the board look at a specific state policy on surplussing items over a certain value and whether they are following policy by having a closed-bid auction.

The protests seem to have made some impact. On Tuesday night, Superintendent Schofield talked to Channel 2 News about the artwork: “It doesn’t speak to us cognitively, it speaks to us viscerally,” he said, adding that the district will consider a lower bid from a university if it will mean keeping the artwork in the state. “The problem is,” says Young-Otterstrom, “that museums don’t have the kind of money that school districts are looking for. The best option is to donate it, if you can’t take care of it.” 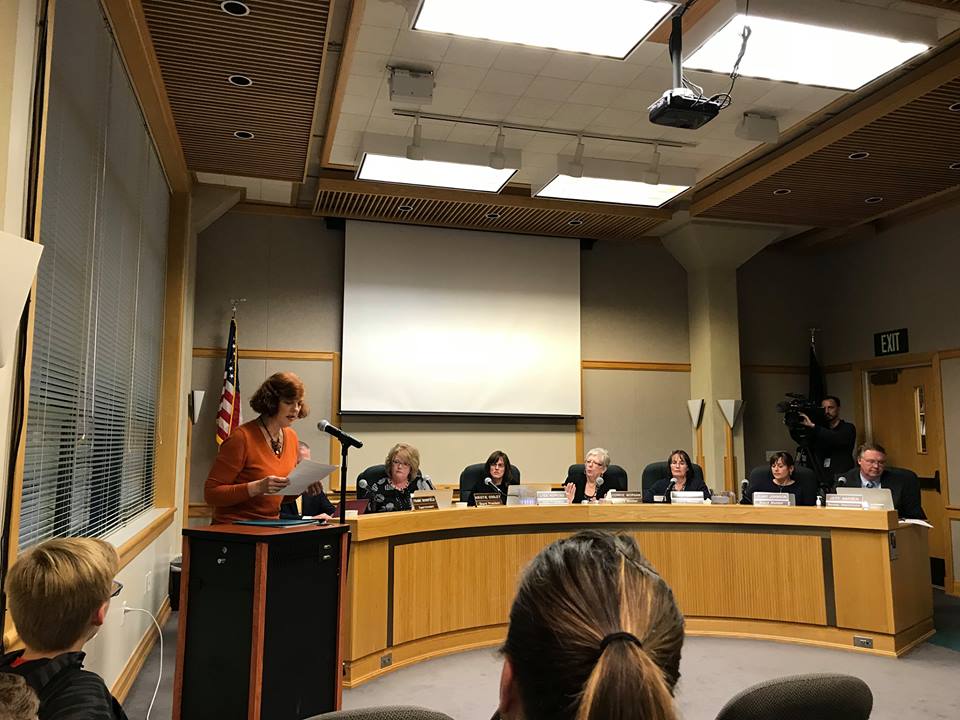 Karen Horne addresses the Logan City School Board during the comments section of Tuesday’s meeting.