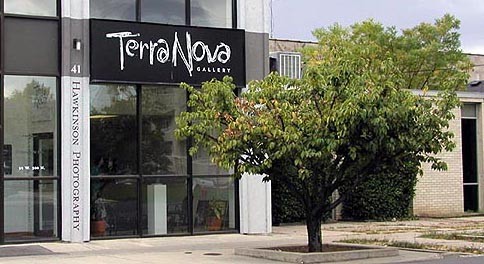 Provo is certainly not the art capital of Utah. Compared to Salt Lake City or Park City, Utah County has almost no commercial art galleries to speak of. So, when David Hawkinson and his wife Florence decided to open a gallery in this quiet college town, they were definitely setting out to break new ground. So, it seemed appropriate to the couple to dub the gallery “Terra Nova,” Latin for “new ground.

Provo (and its sister town Orem) do have art. Most of it, however, is linked to Brigham Young University and Utah Valley State College. BYU has two galleries on campus (as well as additional exhibition spaces in its library) to show work by students and teachers. The BYU Museum of Art provides a top-notch facility with marvelous shows, of both local and national interest. And UVSC’s new Woodbury Museum promises to be another fine exhibition space. But Provo/Orem has had little in the way of commercial gallery spaces, as one might find at Salt Lake’s Gallery Stroll or on Park City’s Main Street.

The Hawkinsons hope their gallery may start to change that. The seed for the gallery was planted over twenty years ago, when David, a young college student from a small Wisconsin town, went to Milwaukee to study photography. It was there that he met an acquaintance, Jim, who ran an art gallery.

“For a small town boy in the big city there were many questions,” Hawkinson explains. “How does one run an art gallery? Where do you find the art? How do you find buyers? Could someone really make a living doing something that sounded so interesting? But, like many new experiences in the big city, those questions settled into the back of my mind while I concentrated on my photography schooling.”

Hawkinson eventually moved to Provo to continue his training at BYU, where he graduated with a BFA in Photography. Hawkinson specialized in photographing artwork, and received additional training at the J. Paul Getty Conservation Institute as well as the Smithsonian.

After heading the Imaging and Photographic Services at the BYU Museum of Art for five years, Hawkinson opened his own commercial photography studio in Provo. And the seed planted in Milwaukee began to grow.

Because of his specialty, Hawkinson continued to photograph artwork for artists and it was this interaction which led him to reconsider opening an art gallery. “Sometimes it would take a while for artists to come pick up their work,” Hawkinson explains. “One time someone left some stuff and it was there for a couple of months. I didn’t know it was going to be there that long, so we said, ‘Okay let’s put them up on the wall.'”

The Hawkinsons enjoyed having the work up, but eventually the artist did return to claim his pieces. “So, when he came back to get his work we said, ‘Man, it’s empty now’ . . . then we said ‘Who else do we know that we could put up?'”

When the Hawkinsons began looking around for a larger space for their photography studio this year, they were eager to find one that would accomodate displaying artwork as well. They found just such a place on Provo’s 300 North (41 West). The ground-level space features a front reception and gallery area and a photography space in the rear.

The gallery space is what the Hawkinsons describe as “intimate.”

“One of the criteria when people are wanting to show here are “what size are your pieces,” Hawkinson explains. “But you can still hang a three foot Clay Wagstaff — and you could hang ten or twelve of those.”

Terra Nova’s first exhibition opened in September and featured works by fifteen different artists. They wanted to show the public both the quality of the work they would be showing as well as the range of artists. Their second and current exhibition features works by Gwen Peine Toomalatai, an Ogden artist who shows in national galleries but is rarely seen in her home state.

The Hawkinsons are interested in showing a variety of artists at different stages in their careers. They are willing to consider student work as well as experimental work by more established artists. All of it ties in to the vision for their gallery: Terra Nova or “new ground.”

“Terra Nova” has multiple levels of meaning for the Hawkinsons’ gallery. As David explains, it means “new ground for us. Florence and I have never run an art gallery before. We’re beginners, big time. New ground for artists, for new artists who have never been in a gallery before . . . this could be their first step into the gallery world. This could be their first show after graduation. Or could it also be new ground for established artists who could be with another gallery doing something they like but maybe they’ve got some other ideas and they want to try something different . . . and they want to try it out in a different area. So it could be all three of those.”

The Hawkinsons vision for their gallery goes beyond their own and their artist friends’ interest. In thinking of the gallery they are thinking of the wider community as well. “We don’t really know if in Utah Valley there’s really been an exhibition space like this. So it could be new ground for the community.”

The Hawkinsons don’t have plans to make it rich as gallery owners — though they certainly hope to make some money. Mostly, they want to create a place where people interested in art in Utah County can come together. They want to be a central node for artists and art lovers. 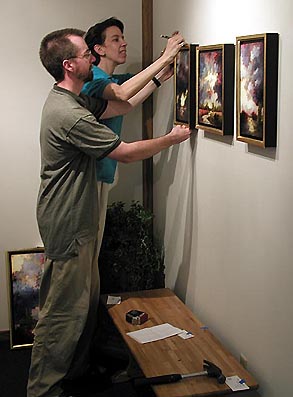 With his photographic work, Hawkinson has provided artists with valuable services for years. Now he hopes he can provide more – for the artists but also for collectors and the general community.

“We’re trying to get everyone so that they win,” Hawkinson says. “People come in for openings and say ‘Hey, he’s a photographer,’ so I pick up business. People come in for me to shoot their work and I can say, ‘You know, I think I know someone who might like your work.’ Or a client can say, ‘Hey if you ever see this sort of thing, let me know.”

At heart, Hawkinson is a photographer and he continues to see his studio as his main business. But he and Florence hope that, with their unique situation, they can be a catalyst for activity in the Utah County art community.

In November, Terra Nova Gallery features a new exhibition, “BYU Grads ‘At Home’ Together'” with a reception this Friday, November 7th, 6 – 8 pm. The exhibit will feature works from Cassandra Barney, Todd Orchard and Joanne Smith and will run through November 29th.

To learn more about the photographic services offered by David Hawkinson, visit
www.hawkinsonphotography.com
where you can also view a number of artists webpages, a free service for Hawkinson’s clients.