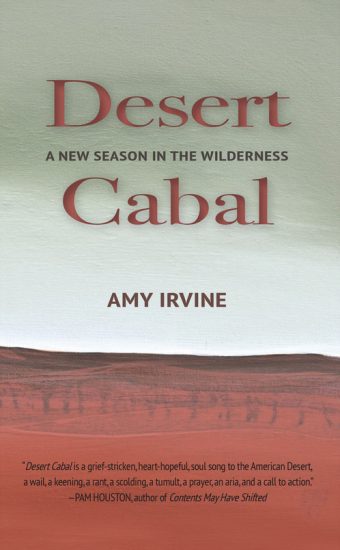 In Desert Cabal, Amy Irvine hikes into the Sonoran Desert with coffee, liquor and a handgun to argue with a dead man. Published by Torrey House Press and subtitled “A New Season in the Wilderness,” it’s a narrative essay in 80 pages where the former professional rock climber and current public lands activist grapples simultaneously with the contemporary approaches to the protection of wilderness and the spectre of Edward Abbey.

A sixth-generation Utahn with a father who plunged his family into the adventures of the West, Irvine didn’t need the author of Desert Solitaire to introduce her to the flora, fauna and life-altering perspectives of Utah’s redrock country; but he gave her the words to name them. Many years, three marriages and one special-needs daughter later, Irvine re-examines the book she discovered as a teenager. “Since your time in Arches, the art of survival, just like the search for solitude,” she tells his ghost, “has gotten far more complicated.”

Irving writes that it is hard enough, in the age of Trump (“the man with the agent orange hair and napalm personality”) to continue to protect public lands from exploitive industries, but as Abbey admittedly foresaw, you have to protect them from your own success as well: “the minute there is a line drawn around these lands, a sign staked on their behalf, the masses come running.” Those masses include herself and fellow desert rats, but also the elite liberals who, when they’re not getting lost in their fancy hiking gear and needing search parties and helicopters to save them, invite her to speak at their catered events in faux-chalet mansions. In an era when the lands that do remain protected have become bastions for recreation, it becomes increasingly difficult to have a “wild and reckless reckoning.”

When Irvine “updates” Abbey’s corpse on climate change, the #metoo movement and public land policy, the narrative stumbles, like a hiker in the wrong footwear — the statistics too well-known to the choir that is her audience, the narrative ploy too clumsy. She is at her best when she’s trying to reimagine the general, the ideas that permeate the wilderness movement, and encapsulates these in stories: about her daughter, her father, the men she’s married and the horse she loved.

Despite the offerings of French roast, cold Coors and Bulleit rye (the 9mm Glock Irvine brings is for protection from bipedal predators), Abbey’s posthumous voice never appears. But Irvine finds sufficient material, in the words he wrote and the life he lived, to argue with his cult following; his ideas on immigration; and, at the heart of the book, the problem of patriarchy: “It’s only fair that if you get to wax on about the takedown of governments and the sabotage of industry, then I should get to take my shots at patriarchy. Because that’s part of the problem . . .”

Desert Cabal is a lament for a cracked, if not completely fallen, idol — “You’re not quite the maverick you once seemed,” she says to Abbey as she invites him “to do away with that facade of rugged western individualism which I’m not buying anyway” — but also a plea for an endangered dream. Written on the 50th anniversary of the publication of Desert Solitaire, Desert Cabal stakes out a new philosophy for the movement Abbey’s book ushered in:

“There is the adventure that traverses the land, that excites and restores. But there’s also an inner landscape — its fiery furnace of the heart, the natural bridges built between beings. So I say to you, go solo, into the desert, yes, do this and love every minute. But then come back. Come join the cabale that has joined together, to save what we know and love. It will take multitudes to slow the avalanche of apathy. And it will take a lot of devotion.” 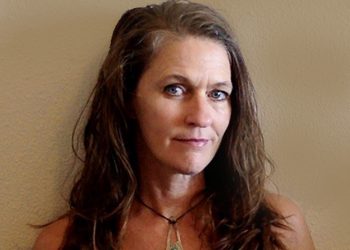 Amy Irvine will read from and discuss her book Desert Cabal: A New Season in the Wilderness at Ken Sanders Rare Books, Salt Lake City, Tuesday, Oct. 23 at 7 p.m. as part of the Utah Book Festival.