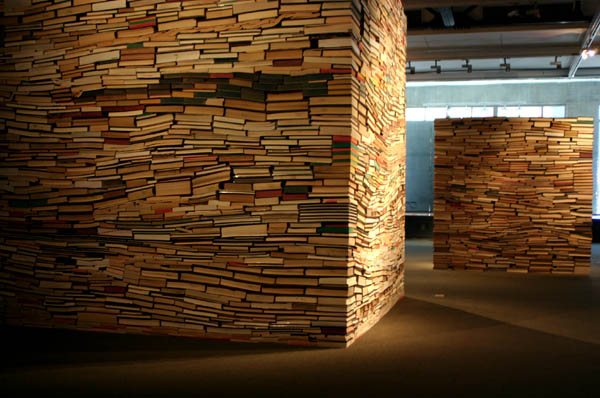 Don’t believe everything you read.

Or at least don’t swallow it wholesale, for words are slippery things. They can mask something just as easily as they can point to it – especially when those words are art labels, the mediocre adhesives we use to desperately pull together artists who themselves are inclined to break away from any controlled center like atoms at a big bang.

Which is why artists rarely like us critics. Because with our words we try to rope in their works, herd them into a box that is readily comprehensible to a general public.

But artists, with the need to provide biographies and artist statements for exhibitions, grant applications and gallery submissions, fall victim to the same problem as critics — throwing up art labels like sign posts which, while possibly pointing in the direction of the works, also threaten to surround and obfuscate them. 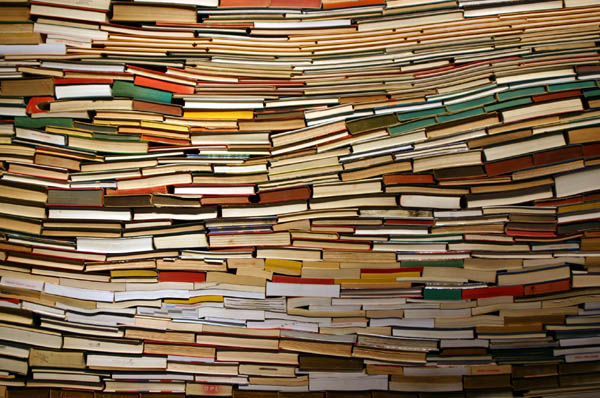 So, when you visit the Kimball Art Center this month – and I suggest you do – to see the installation by Adam Bateman entitled Literal Sculpture, don’t take things you read there too literally. Even if Bateman himself wrote them.

Bateman creates sculptures out of books. Lots of books. Truckloads of books stacked into massive cubes, arranged as thin teetering towers, or screwed together as globe-like spheres. They are used books, from libraries mostly. Bateman is interested in the books as symbols of language — signifiers of signification — but shows little interest in the individual book itself. Often turned spine inwards, so all we see is the fore-edge, the books are essentially building blocks for his sculptures that create patterns, rhythms, and textures. 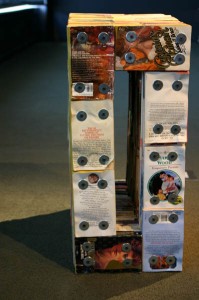 And thus we read on the placard at the Kimball: “Adhering to the basic principles of Minimalism, Bateman’s work is mechanical and impersonal rather than emotional and introspective.” The books are the building blocks of Bateman’s “minimalist” sculptures, but don’t be too quick to put them in a shiny aluminum Donald Judd box.

Bateman’s choice of materials gives his minimalism a very earthy, brittle, dewy appeal. And I imagine he will like the deconstructive aspect of my appreciation when I point out that the sculptures, at least in their state of being viewed, burst out of any “minimalist” pen we might try to put around them.

With minimal materials and minimal construction, Bateman creates the maximum effect. There is nothing minimal about where these sculptures can take you.

Bateman’s works are referred to as “minimalist” — a good enough guidepost, but one, I think, which is inadequate or which will lead you to only a partial view of the works. Take a moment and google “minimalism” and you’ll begin to get a general sense of what we are talking about.

At Artlex you’ll find the following: “Minimalism- A twentieth century art movement and style stressing the idea of reducing a work of art to the minimum number of colors, values, shapes, lines and textures. No attempt is made to represent or symbolize any other object or experience. It is sometimes called ABC art, minimal art, reductivism, and rejective art.”

Bateman certainly reduces the means of his creative process, using little color or shape. But I doubt you can experience these works and not be taken to any symbolic place or experience.

Though books, in some circles, may be on their way to becoming anachronisms, it is the experience that everyone, or almost anyone, has had with a book that makes Bateman’s work effective. (It was a lazy Saturday afternoon as I looked at Literal Sculptures at the Kimball, and a family with preteen children came into the sparse exhibit. The kids couldn’t quit talking about how “cool” it was. I really doubt that the reaction would have been the same if the sculptures had been created out of stacks of shipping crates or even Campbell soup cans.) Whether our experience with books is that of cheap paperback novels, like those used in Bateman’s “All Our Tomorrows,” |3| or dense law tomes such as appear sporadically in “Secondary Structure (How Not To Be Cowed),” we have all had the experience of that small physical object, the book, taking us to the vast experiences of the mind. 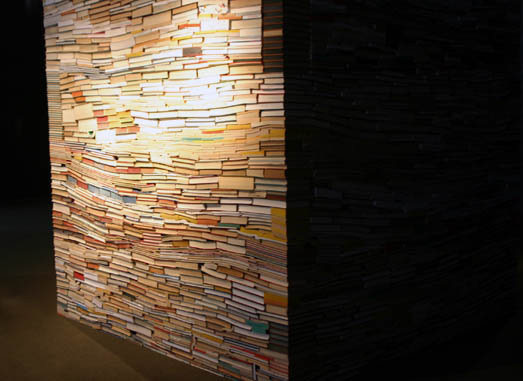 Books are simultaneously dense and light. Just look at the sculptures, the weigh books sag and bend beneath the weight of their comrades. You see and feel the weight of the pieces. But you also “know” books and that is why they remain, in a sense, light. For they are filled with words and words are about density and lightness — the dense opaqueness of the ink floating across the light and infinite surface of the white paper. A book is as much about the margins and the spaces – the reading between the lines – as it is about the black ink on the page.

Though sometimes Bateman creates spheres, waves and spirals with his book sculptures, in the Kimball exhibition he relies almost entirely on straight angles: two massive cubes, rectangular mats of tiny letters on the center’s floor, and straight stacks of paperbacks on bookshelves. 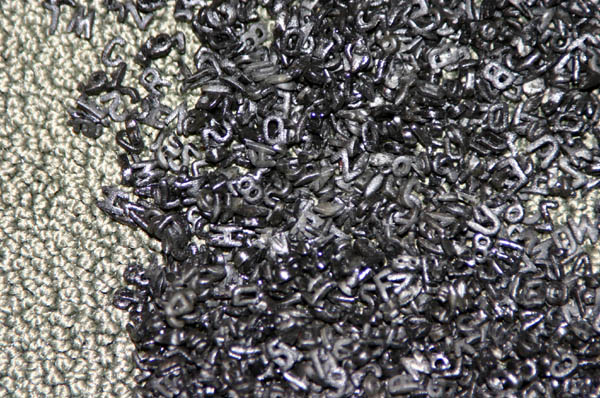 Looking at some of the patterns in “Secondary Structure (The Word, The Flesh and Father Smith),” |4| I can’t help but think of Dubuffet’s Hourloupe series. This sculpture is a massive eight by eight by eight-foot cube. Lit from just one side (or at least it was when I was visiting), each corner slips into a relative degree of darkness, making me think of our space age vision of a sunlit earth, seen in the four corner framework of the ancient Greeks or Navajo. |5| A smaller (6’x 6’x6’), though similar sculpture, “How Not To Be Cowed” is installed nearby, a satellite or smaller planet to its larger neighbor. The planet motif is echoed by a spherical work, “Sphere #5,” but in the straight-line context of the installation, this piece feels out of place. 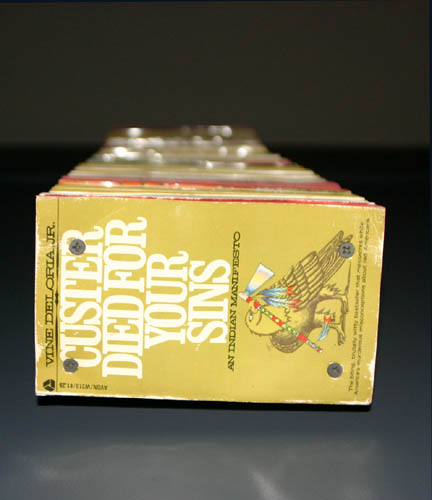 In three works related to the book sculptures, Bateman moves one step down on the linguistic hierarchy, creating works using letters – black pasta letters – rather than books. They are preserved in canning jars – evoking the unused forces of language? – |6| or, in “Accumulaton 1 & 2”, spread on the floor in a rectangle not unlike a Buddhist sand painting.|7|

In his piece, “Custard Died For Your Sins,” |8| we recognize the colored pages of cheap paperback novels, evoking countless cowboy adventures designed to be consumed and discarded. But look at the underside |9| and you’ll see the paperback of the work’s title. With the subtitle, “An Indian Manifesto,” it is the underside of the romantic dime-store version of the American West. 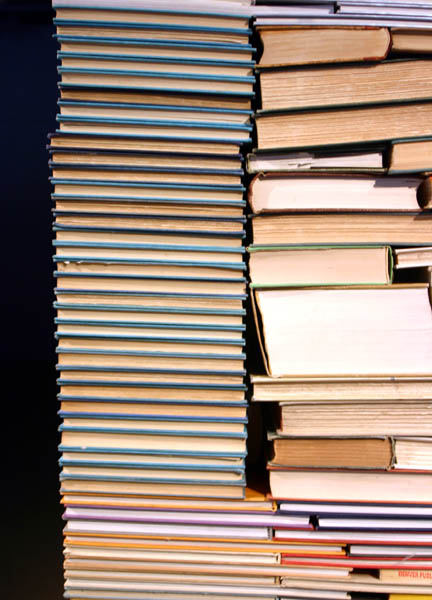 This one glimpse at an individual book is an important reminder. Whether or not we know its identity, a book is never just the sum of its physical parts. It is not just the board, the crash, the endsheet, the flyleaf, the fore-edge, the gutter, the head, the hinge, the joint, the lining, the paste down, the spine, the spine piece, the square, the tail and the text block. It is always more than this. It is “A BOOK.”

Though in most instances Bateman turns the book inwards and says the actual book is not as important as the structural element it provides, his work cannot escape elements of the biographical. The biography of the books that is. When you see a detail, like the stamp of the Denver public library, on the pages of a book, you are immediately taken hundreds of miles away. You are transported through time, through the biography of the book, the hands that held it. (Think what a beautiful exhibition could be had with the old checkout cards from library books). With stamps like “no return” |10|or “withdrawn,” |11|I feel a ghostly presence, and can’t help but think of Melville’s Bartleby, laboring in the Dead Letter Office. I hear, echoing in the spaces of the Kimball now that the family has left, Bartleby’s refrain “I would prefer not” and the narrator’s last words “Ah Bartleby! Ah humanity!” 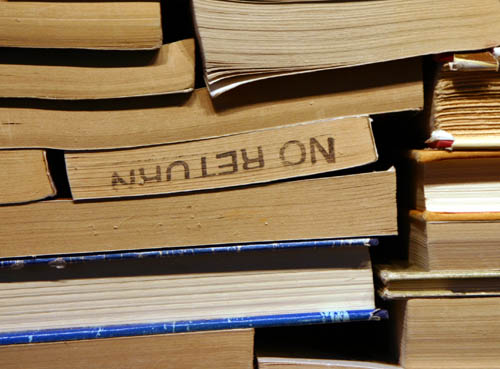 And the hearing of voices is not far off when experiencing these sculptures. The words in the books, though unseen, are felt. The grand spaces, the ideas and words expressed in the books take the mind to vast spaces of interior sense, like stepping on the threshold of an expanding universe. Bateman’s massive sculptures are fortresses surrounding a chorus of voices we can only guess at and vainly attempt to decipher. It is whatever chorus we bring with us, the white noise of our lifetime of reading, our exposure to books. When I see them, I hear Bartleby. With you it may be Holden Caulfield, Saint Augustine or Harry Potter. But you will hear voices.

Another voice I hear is the ominous “hallway” in Mark Z. Danielewski’s “House of Leaves.” You’ll forgive another literary illusion, but in the case of Bateman’s exhibit it seems appropriate and almost unavoidable. Danielewski’s novel is a literary “Blair Witch Project” in which an impossible hallway is discovered in a newly purchased house. The house, or its interiors, collapse, expand, go down or up or continue to infinite depths inside this hallway while the exterior of the house remains constant. It is a dark, infinite expanse that changes form with each occupant.

Bateman’s sculptures are similar. The works are much more vast than the simple volume taken by the eight foot square space they occupy and the voices contained within them change according to the experience of the viewer.

Bateman’s stacks of books, his literal sculptures, can look fenced in, surrounded, unmovable; but our own knowledge, individual and subjective, of the nature of books, of their infinite possibilities, gives these pieces a nuclear energy. Bateman has struck on a medium, the book, that can achieve the elemental structural goals of a minimalist art, but which, by its nature, expands the experience and reference of his work into an infinite space that belies the physical weight of the book stacks themselves.

Of course when you go to the Kimball, all you’ll see is stacks of books.

an exhibition review of Adam Bateman: Literal Sculptures at the Kimball Art Center through November 15th