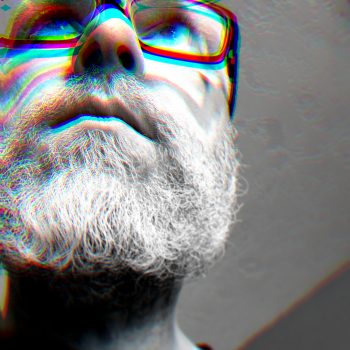 READ LOCAL First is the world’s most extensive library of Utah-related poets and writers. For this first installment of 2022, we present Vince Font.

Font is a writer, editor, and the founder of Glass Spider Publishing, a hybrid micropublisher in Ogden, Utah. Font is the author of the Shadows on the Page book series, the first of which, Shadows on the Page, won the 2021 League of Utah Writers’ Gold Quill Award in the Collections/Anthology category. His other works include the horror novella Gnome Way Out and the nonfiction book American Sons: The Untold Story of the Falcon and the Snowman. His nonfiction essay, Dear Carlitos (A Letter to My Brother), was awarded second prize in the 2021 Utah Original Writing Competition. We are proud to add Dear Carlitos our library.

(A Letter to My Brother)

Do you remember that thing you used to do when we were kids? The thing with the turtles. When we lived in the old house by the creek, sometimes in summer it would rain so hard that it would flood, turning the backyard into our very own specimen pond. There were frogs of all sizes, earthworms thick as rope, salamanders slick as snot, and water bugs and crayfish everywhere. But they didn’t hold your interest. Not like the turtles did.

Maybe it was the sight of so many of them on their backs, powerless to right themselves, that triggered your own feelings of helplessness and made you want to fix them. Or maybe you saw them as some great spilled bounty of mosaic stones you felt compelled to put back in order.

Whatever it was, watching you on those days was like witnessing a whirling dervish set loose upon the earth. You’d erupt from the back patio door and splash all through the flooded yard, feet kicking up explosions of mud as you raced from one turtle to the next, gathering them up and bringing them onto the hardwood deck where it was dry, lining them up in crooked rows like some mad child’s nature exhibit.

Most of the turtles were small, no bigger than your fist, but some were huge—as big around as that enormous dinner platter Mom always kept on display in the dining room but never used. You moved more cautiously with those but they never slowed you down, and you raced with the urgency of a saver of lives, oblivious to the cold and rain and the fact everyone in the neighborhood looked at you like you were something to fear.

I knew you weren’t because I am your brother, but I like to think I would have known better even if I wasn’t.

Once you were certain no turtle had been overlooked, you’d carry them back down to the creek, one by one, returning them all to their rightful places even though there was no way to be certain exactly where they belonged. Who knows how many changes to the habitat you affected? How many future turtle lineages were saved?

Mom wouldn’t let me go outside because I was too small, so I stood at the window and watched. Each time you came back from the creek, you were muddier than before, but there was an expression of such joy on your face that it was impossible not to see what was happening. It was as if a great weight were being lifted from you, and for a short time you didn’t look like the slow kid at the end of the block all the other children avoided, but someone to be admired. Even if all you ever did was save some slimy turtles.

I always thought it was too bad those times were so infrequent and short-lived. Most of us spend the entirety of our lives praying floods don’t happen. You longed for them—and when they arrived, you reveled in them.

Later that night at dinner, you complained about having to wear the shirt that bore the name of the “special kids” academy they tried sending you to. What was it called? Whitmore? Whetstone? You hated it there. Most of the time, you refused to go, always opting for the company of your own—us—over the kids that formed that unique community of cast-asides no one quite knew what to do with.

I couldn’t blame you. How horrible it must have been to feel that you were being forced into a mold you didn’t fit, all broken legs and twisted arms with just a hole punched at the top to breathe through. It’s no wonder why you kicked and screamed until they finally said you didn’t have to go back.

It was a place you felt you didn’t belong, and in so many ways, you didn’t. You were not born the way you are. Somewhere along your way to an ordinary existence, life turned on you. A twist of fate. The arrival of misfortune. They have lots of colorful phrases for these things, but none that ever really capture what it must be like to have your life turned inside out forever.

In the beginning, everything was fine. According to what little I could get out of Mom about the terrible thing she still has trouble talking about, the first six years of your life were uneventful. Normal, if you can believe that. Then, a month before your seventh birthday, something went wrong. You took a nap in the middle of the day, and when Mom checked on you an hour later, you wouldn’t wake up.

Ambulances were called. Dad raced home from work. His brother—our uncle, a medical doctor—arrived at the house in time to jump in the back and accompany all three of you to the hospital. Once there, the mystery only deepened.

The doctors had no idea. Encephalitis, they speculated, but back in the late 60s in that part of the world, there was little else to do in such a circumstance but pray. The thing that gripped you left you comatose and at death’s door. A priest gave you your last rites. Mom was inconsolable. And all the while inside her belly, me. Is it any wonder I turned out so uptight?

Then, just before the sickness scratched you from the world, it turned tail and ran. Not quite returning you to the living as much as leaving you stranded in that pillowy gray space between life and death; the space in which you slept for three full weeks before awakening. When finally you did, you were changed.

Everyone called it a miracle, but I have my own thoughts. What kind of miracle plucks a boy from death and returns him too damaged to ever become his own person—leaving you the way you are and always will be? I’ve heard it said that God has a wicked sense of humor, but you of all people know firsthand his mean streak is even worse.

There were years of recovery. Physical therapy. Speech therapy. Eventually, the aftermath of the illness transformed into daily life. The struggle became the routine. Then one day, turtles. Everywhere. Stirring something inside so deep that no one could understand, least of all you.

The creek bed rose and fell with time. Floods happened, and then they didn’t. The creek ran dry, and right about that time was when we moved away. Do you remember staring out the back window of Dad’s colossal dayglo station wagon as we drove away for the last time? We never saw the old house again, but sometimes I still go there in my sleep. In those dreams, the creek is never not flooding, and you are never not throwing yourself into it for the sake of lives that could never thank you if they wanted.

There was no creek near the new house, and it never rained enough to cause a flood. If you ever saw another turtle in the wild, I never heard of it.

Time marched on. We grew up and apart. And when the time came, I left you behind to find my way.

Occasionally, we’d talk by phone. Every time we did, you’d fill my ear with tales of how soon you would be living on your own like me, yet as confident as you sounded, I think you believed it even less than I did. It hurt to hear you talk about a life you’d never live in a place you’d never reach.

After I left, I stayed gone for years. I think I thought that doing so might help you grow your own wings without constantly being compared to mine. Can you blame a guy for running away?

But lately when we talk, your voice is tired. And now that I see age descending on your bones in pictures, and as I stare into the mirror to find new wrinkles where once the flesh held smooth and taut, it dawns on me our times are short.

I’m home again now. Back. A place I haven’t been since yesterday was still a dream away. Turning the wheel onto our street, I see you standing by the mailbox. You’re not content to wait inside with Mom and Dad. Besides, you’re eager to get out, and the lift in your shoulders as you see my car approach makes me feel close again to the child you once were.

Perhaps, I think, we still have time.

I blow the horn, drop the window, call your name—Carlitos, never Carlos, always a child though you are older—and you come to the car like a wanderer overdue for a break.

You’re pawing at the passenger door before I can even unlock it, and as you jump in beside me, your age-stained backpack crushes the end of my nose and I can smell the peanut butter bars you’ve packed for lunch, those terrible things, always your favorite.

A resigned sigh escapes my lips, and as I anticipate the smacking sounds you’ll make as you shovel them down beside me, I’m struck with the thought that there are some things in this world at once both maddening and comforting.

Your hair is short, your brow receding, and the salt-and-pepper that remains will turn an ashen shade before long. There’s flaking skin between your lips and chin, but the stubble that you’re growing just might cover that in time. Who’d have thought that one day, you might just be distinguished looking?

I tell you happy birthday, and you say thanks. Today’s a brothers’ day, just you and me, the first I can recall. There’s still a few hours before your birthday dinner, and I’m taking you off Mom’s tired hands to give her time to put something together.

This year is a milestone. One nobody ever thought you’d live to see, especially on that fifty-three-year-gone day when the sky grew dark and the angels turned a blind eye.

I ask you how old you are, and it’s just like you to lie: “Thirty.”

“Yeah, right! Double that,” I remark, and you hit me with a sidelong glance like you can’t be sure you heard me right. Then your eyes stare straight ahead as something inside ticks and tocks, and you nod your head in concession.

When I ask you where you want to go, you say, “The aquarium.”

I laugh and put the car in gear. “Alright, the aquarium.”

One guess where you’ll want to spend the entirety of our visit. I think they might be glad to see you, too.