Utah’s 15: The State’s Most Influential Artists 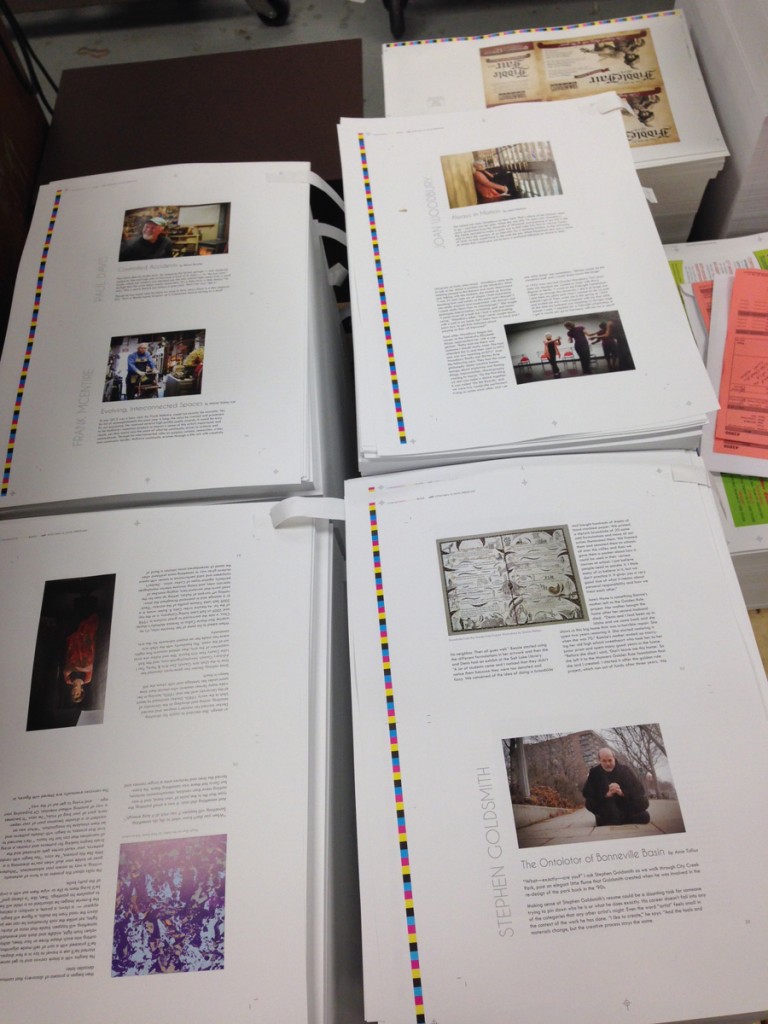 The pages of Utah’s 15: The State’s Most Influential Artists at the printers awaiting assembly.

About this time last year, Laura Durham had an idea: ask people to think about who they felt were the state’s most influential artists.

As an arts administrator, she was tired of always having to justify or defend the arts community, so she wanted to get people thinking about how artists have influenced the cultural landscape in Utah. Utah’s 15 was born.

We asked the public for nominations for the honor, saying, “these are not necessarily the ‘hottest’ artists, they are not the most ‘honored’ artists, but these are the artists who make a difference in Utah. We left it to the public to decide what they felt “influential” meant. We wanted these artists to be nominated by their peers, those that, as we said in our press release about the program, “see the “every day” situations and projects our artists engage in. Artists are not only thinkers and creators; they are collaborators, builders and leaders.”

We received almost 100 nominations. We didn’t want the final fifteen to be selected by some small committee of “experts.” Nor did we want it to be a popularity contest, with people’s Facebook accounts filled with pleas of “vote for me.” So we asked a pool of over 200 people — artists, writers, administrators, patrons — to winnow the list down to fifteen.

We announced the fifteen last year during the 35×35 awards reception. At the time we knew we wanted to do something else about these fifteen. A special edition of 15 Bytes dedicated to the artists was the initial idea.

What we came up with instead (and which goes to show how one simple idea can quickly snowball) was Utah’s 15: The State’s Most Influential Artists. It’s an exhibit that opens at Salt Lake’s Rio Gallery this Friday, 6-9 pm, and continues through March 21. But it’s also a book.

A softback book, bound in brown linen, 96 pages, with essays on the artists by some of Utah’s best writers, portraits by Zoe Rodriguez Photography, and examples of the artists’ work, Utah’s 15: The State’s Most Influential Artists is a unique publication on some of Utah’s most important artists.

This book is published with the support of The Sam & Diane Stewart Family Foundation, Utah Division of Arts & Museums, and The Doctorow Family Foundation. It’s available at cost for $10 on a pre-order basis. Otherwise, copies will be available beginning February 21 for $13.

To learn more about the book, or to order your copy, visit http://artistsofutah.org/15Bytes/index.php/utahs-15-the-book/.