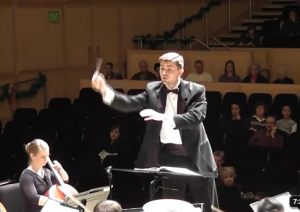 Two new pieces have been added to the lineup of the Utah Chamber Artists’ Chant & Contemplation Cathedral Collage concert, featured in this month’s edition of 15 Bytes.

In a first-ever partnership, Utah Chamber Artists (UCA) and the Salty Cricket Composers Collective put out a call to commission to short works for string quartet. They announced this week that after reviewing dozens of submissions, two works by Stephen Voorhees were selected.  Voorhees is a graduate student in orchestral conducting at the University of Utah, a Utah native and graduate of Murray High, and frequently conducts Salty Cricket performances as well as submitting his own works to their programs. The two commissions are scored for string quartet and based on medieval chant. These will serve as preludes for other pieces on the concert. Various chants, both sung and played on instruments, will thread the music selections together throughout the program.

The competition was adjudicated by UCA Artistic Director, Barlow Bradford. “I chose both of Stephen’s works as they exactly express the atmosphere we are trying to communicate at those points in the program,” says Bradford. “The atonal piece, called ‘Aeternam’ by Voorhees and based on the Requiem Aeternam chant, precedes an intense work by J.A.C Redford which was written in memory of the composer’s sister-in-law who was brutally murdered last December. Stephen’s work is fierce and emotional and makes an ideal companion for Redford’s piece. Voorhees’ ‘And Ever, Amen: A Memory’ precedes my own ‘Ave Maria.’ This elegiac work’s gorgeous and peaceful nature will be amplified within the beautiful acoustic space of the Cathedral of the Madeleine. I am a composer myself, and it was thrilling to be directly involved in generating new music from Utah composers.”

The winning two pieces will be premiered at the Utah Chamber Artists’ annual Cathedral Collage concerts called, “Voicing Wonder…Chant & Contemplation” on September 19 & 20, 2011. The concerts will begin at 8:00pm and will be held at the Cathedral of the Madeleine. Admission is free to the public and no tickets are required. You can read more about the concert in this month’s edition of 15 Bytes.

Utah Chamber Artists and Salty Cricket Composers are both sponsors of 15 Bytes. You will have a chance to win tickets to performances by both groups during our September “Where to Wear” tee shirt events. Click here to learn more.