Sharon Shepherd Returns With a Brew of Atmospheric Abstracts 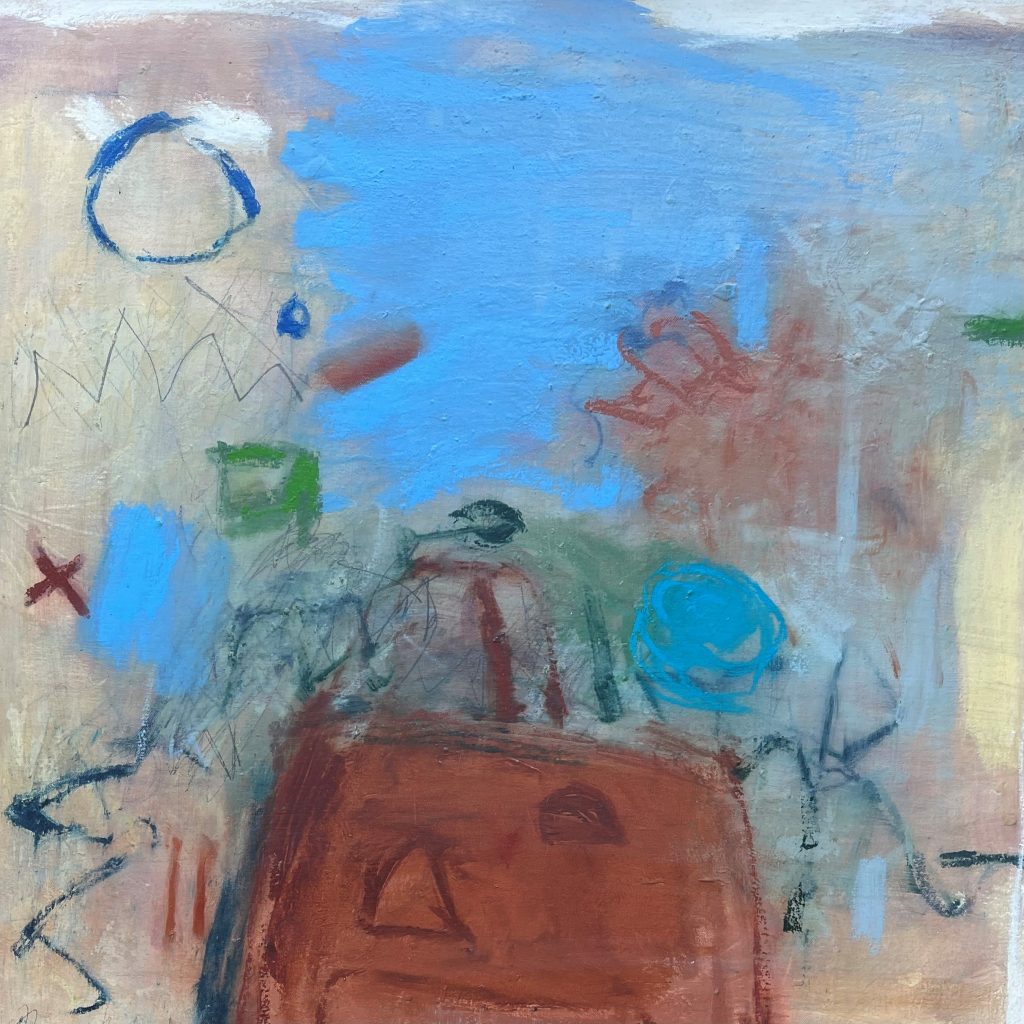 Painters and dancers alike make their arts in space: visual design and movement through three dimensions are essential tasks they face in common, skills they must possess. Painters create imaginary space and choose the optical illusions that take place within it. For dancers, real space is the primary medium through which they move, while the audience follows. Another distinction is that painters generally work alone: they can do so almost anywhere, even if they must travel to where a surface waits to be painted. Dancers, on the other hand, most often work collaboratively, and where that joint effort occurs is where the dancer must be. That may explain how and why, when her husband, a Ririe-Woodbury alum, was offered a place in the Margaret Jenkins dance group in San Francisco, the Marriott Library’s Fine Arts Librarian — by then a celebrated painter as well — took up her paints and brushes and journeyed with him.

It’s a measure of how popular and well-known painter Sharon Shepherd and dancer Laird Rodet were then that, approaching 40 years later, whenever they return to Salt Lake City their friends turn out in sufficient numbers that crowds gather and wait to reconnect with them. Such lines formed in the Dibble Gallery, downstairs at Phillips, Friday night when Shepherd debuted her latest canvases. And there they also became reacquainted with the reliable pleasures of her painting, which unlike so many of today’s sensations has no need to repudiate yesterday in order to make way for tomorrow; each work is sufficiently individual in itself to stand the test of time. 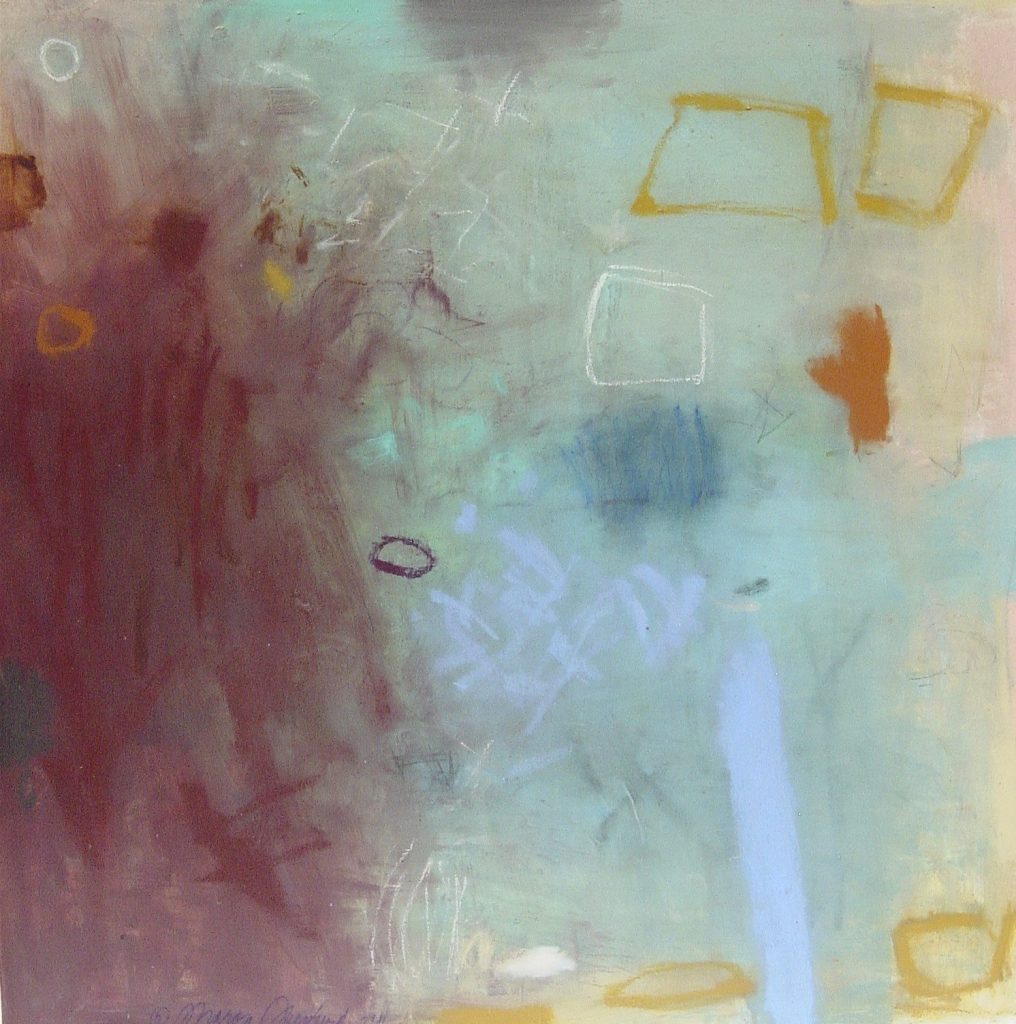 Take, for example, “Storm Brew,” Phillips Gallery’s marketing choice to represent Shepherd’s voice. At its top, near the center, a gray semi-circle floats in a blue-green patch of wavy light that suggests the surface of water seen from below. Various other blue and green areas below reinforce this sense of aqueous depths, but what most nearly confirms it is the variegated violet on the left, vertically striped and waving on its right edge like floating plant life. In contrast to these soft clouds of color, circles, squares, and trapezoids in orange and white seems to shimmer despite their linear characteristics. The reddish violet advances optically while the cool blues recede, creating an almost irresistible sense of light-filled, open space — possibly open water — that very well might fit the title.

However, Shepherd’s titles are no more representational than her imagery. An ardent fan of poetry and expressive use of language, she long ago began collecting curious and suggestive phrases, which she writes down and saves without any further associations. When she needs a title, should one not come to her, she can review this collection of verbal prompts until she finds one that feels right with the composition at hand. Consider “Snapping in the Air,” where once again a blue patch occupies much of the upper center of the canvas. Here, though, the blue is more atmospheric than aquatic, while the band of marks and the shapes they suggest run horizontally across the space, seeming to divide it into three zones, with the marked rectangle in the bottom closest and the upper half palpably farthest away. If the viewer’s eye accepts the semicircle, triangle, and swoop below as facial features, it’s almost too literal an association with the title. Abstractions are hard to summarize, talk about, or even identify — even the artists will say something like “the one with the blue circle in the upper-left corner.” But it’s easy to see here how each title gestures towards the various possible ways the colors and forms do their work, together creating material for another viewer’s own memories to bring to life. 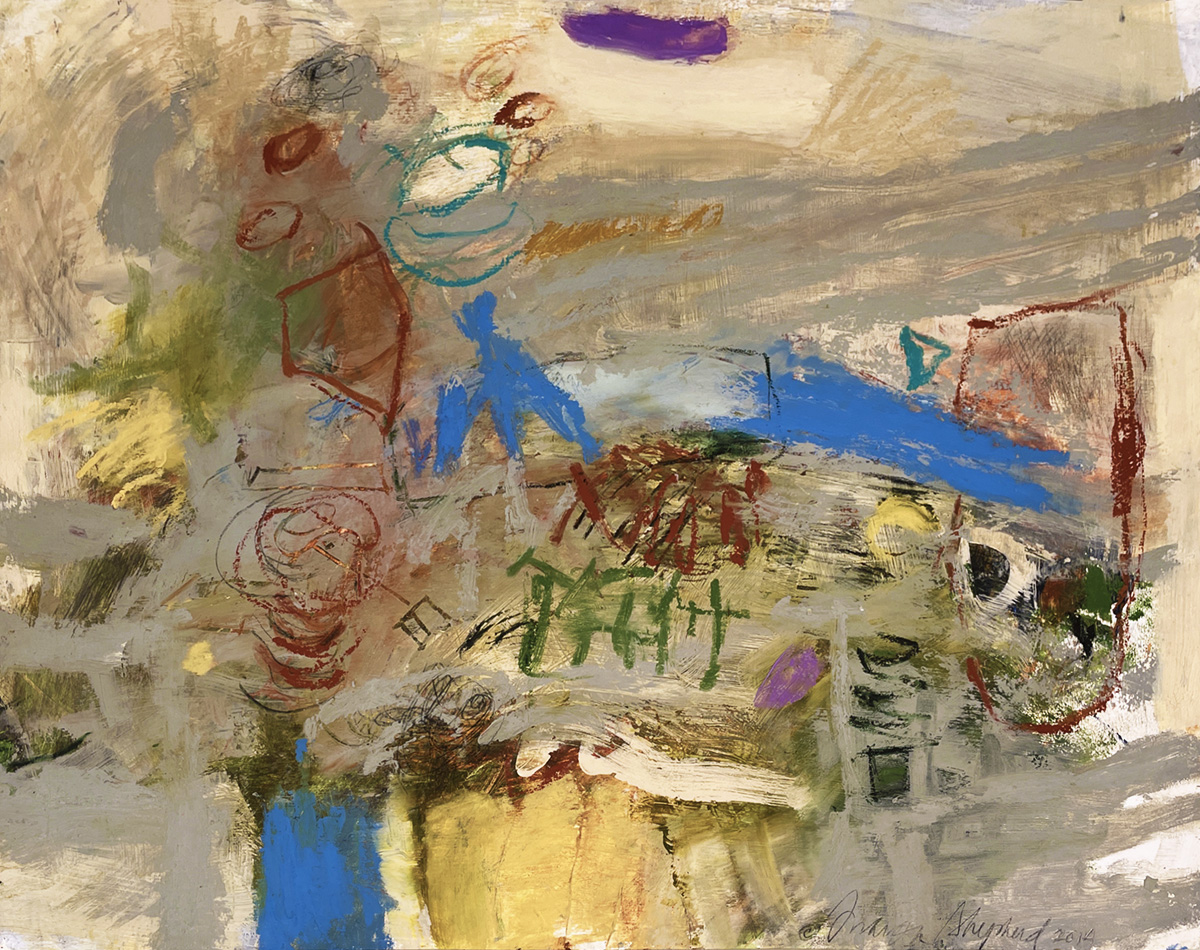 Other titles lend credence to this allusive, but not denotative, connection between words and images, as though should one collect all of Shepherd’s titles, they might together describe how her art actually comes to be. “Harmonic Doodles,” “Tingalingaling,” and ”Zigzag Fetish” can all be found in the current collection at Phillips, which brings to mind a remarkable fact about the gallery and the artist. Between them, they share more than a century of association, both having taken up their tools at nearly the same historical moment, half a century ago. In the years since, both have branched out, Phillips becoming a full-service gallery with workrooms lined with art by the best-known Utah artists, and Shepherd offering jewelry design among her other much noted and desired skills. Recently, she began offering shopping-style bags made from canvas she’s painted, but decided not to sell as art. Those who connect with her artistic voice can now carry an original, authentic piece of it with them.

On a personal note: I must thank Ann Poore for her invaluable assistance with this review. During the years before their departure for San Francisco, Sharon Shepherd and Laird Rodet lived next door to Ann on Capital Hill, and it was she who was scheduled to write what would have been a far more detailed and rewarding profile for this space, had circumstances not prevented it. It’s my opinion that no one does a better job of capturing the stories of Utah’s unique artistic personalities, and I only hope the wonderful stories she was able to share with me about this couple will interest enough readers to bring them to light … and soon.