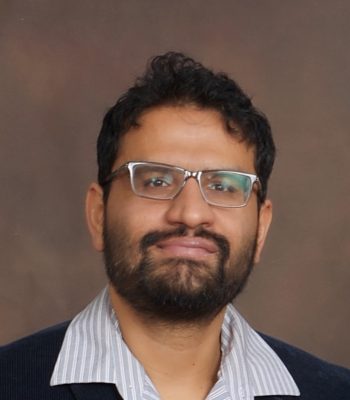 Adiga grew up in Nepal. He writes in English as a second language. His short fiction focuses on South Asian immigrants—among the fastest growing communities in the United States but underrepresented in media and literature.

Among other publications, his stories and articles have appeared in Story Quarterly, Belmont Review, Salt Lake Tribune, and The Chronicle of Higher Education. In 2017, his short story “Bombay Curry Kitchen” took second place in the 60th Annual Utah Original Writing Competition. Today’s publication is a personal essay.

I grew up in Nepal, a country of snow-capped Himalayan peaks and frothy rivers that cut through deep, rugged canyons. Eight of the fourteen Himalayan ranges, taller than 8000 meters, are located in Nepal, a country smaller in landmass than Utah. Sadly, I have never been anywhere near the foot of these mountains. Climbing mountains was unthinkable in the high-caste culture that I grew up in.

In Nepal, the caste system is a form of social hierarchy based on a person’s hereditary rank: you are who you’re born into. If you’re born into a higher caste, you enjoy all the social and economic privileges that the caste inherits; if you’re born lower, you stay there. Although the caste system is banned by the Nepalese constitution, and communities have better access for upward mobility these days, centuries of cultural mores don’t unhinge in a few decades. So, I grew up internalizing the idea that climbing mountains was the job of the Sherpas, the lowly porters who make a living by carrying the bags of western tourists. As a privileged Brahmin, I was shielded from the harsh ruggedness of the mountains.

I remember seeing the peaks of Annapurna from the rooftop of my childhood home. When the sun was up, it cast a glow along the contours; at other times, the mountain remained elusive behind the slowly moving clouds, stirring in me a longing that has never been fulfilled. I left Nepal when I was eighteen. The mountains of my own country remain magical, mysterious.

One reason for my move to Utah after graduate school was to reconnect with the mountains, and through this relationship come to terms with a past that I have left behind. By exploring the Utah mountains, could I at least get a taste of what it might be like to climb in Nepal?

In the summer of 2018, I went on my first hike ever. Although I could have chosen grander and more challenging trails, I picked the Living Room, a modest hike that can be completed in three hours, up and down.

Situated close to downtown Salt Lake, Living Room perhaps gets its name from the flat rocks stacked up like furniture at the peak on which you can sit and gaze over the beautiful valley. You walk alongside wildflowers, sagebrush, gamble oaks, and green grass next to mid-size boulders. This is a family trail where people walk their dogs or go for a quick run. It encapsulates a practical way of American life where nature has been tamed for human recreation.

Mountains have a sacred significance in Native American cultures, but owning a house in the hills of a modern American city has long been associated with prosperity. If you don’t have to worry about wildfires and landslides, the smooth roads curling up the hills promise a retreat from the hustle-bustle of city life. In Nepal, living in a mud house in the hill signifies a life of precariousness. Just to get home from a grocery shop, you might have to cross a bridge made up of stacks of wood tied together with rope. An accidental slip means a life lost into the snarling river. If you survive that, a thick Lali Gurans forest might await you. Getting home every evening can be a testament of the human spirit, always humbled before the might of nature deities.

Mountains and plants are sacred in Nepal, a country where Hinduism and Buddhism are interwoven into daily cultural practices. Mount Kailash is the home of the Hindu deity Shiva. Buddha himself attained enlightenment by meditating under the shaded protection of a Peepal tree. It is still customary, for Hindus and Buddhists, to tie a red thread around the trunk of the Peepal tree for auspiciousness. Plants like Neem and Tulsi are considered sacred and grown in people’s houses for protection. Temples perched on top of hills, or prayer flags strung along mountain ridges, is a common sight. Climbing mountains in Hinduism implies a religious pilgrimage, and carries a legacy of the caste system. High caste travelers are aided by low-caste porters, and in a rare case of solidarity, both travelers, together, face challenges thrown their way by deities of the natural world.

The Sherpas are a porter community. The first person to climb Mt. Everest was Tenzing Norgay Sherpa along with Edmund Hillary. Sherpas are mostly Buddhist and fall outside the caste hierarchy of Hinduism. Buddhist minorities struggle to separate themselves from the dominant Hindu culture, so many Hindus assume Sherpas are a lower-caste ethnic group, because they make a livelihood by carrying other people’s burdens. Even though the mountain tourism industry has provided many Sherpa communities with an economic lifeline, in the eyes of conservative Hindus, they are minions in the pecking order of social acceptability.

Growing up in Nepal as a high-caste Hindu, I was not old enough to go on pilgrimages, shielded as I was from the mountain culture and from rough, rugged Sherpas. My parents were liberal and open minded, but my place in the world was shaped by the surrounding culture. In between homework, TV, and soccer games, I would occasionally be mystified by the beauty of the Annapurna range, always off-limits. Years of conjuring up romantic ideas of the mountains, their snow-capped peaks and precipitous drops, contributed to my fear of the mountains. In Utah, I wanted to take baby steps.

On a warm, May morning, I started at the crack of dawn, on the three-mile hike along the Living Room trail, self-conscious of my exaggerated gear—a hydration backpack stuffed with a pair of binoculars, an extra pair of hiking boots, protein bars, and even a folded-up trekking pole. A friendly neighbor, walking her dog, had rolled her eyes. “Sure you don’t need an ice axe?” she’d said, but I wanted the whole experience, and every support I could garner in case I was attacked by phobia, a rattlesnake, or who knows, even a Yeti.

My access to mountains had come from magazines like the National Geographic. President Jimmy Carter has written about a trek to Kala Patthar, a range close to Mount Everest. In the article, Carter describes the climb as one of the foolish decisions he has ever made. The sheets of melting ice had made it a harsh climb, and Carter was so out of breath, he says he really understood the term “breathtaking” for the first time. Then there is the legend of the Yeti, the abominable snowman, who preys upon evil spirits that pollute the sanctity of the mountains. Reading these stories, I would wonder, if I too might climb over miles of rugged wilderness someday, my feet chafing against the skin of my shoes. Perhaps, a giant Yeti would slowly follow the trails of my human scent.

These stories came back as I trudged up the Living Room ravine.

I smiled at how silly the thought of the Yeti was in these modest surroundings. The Living Room trail isn’t steep or treacherous but can be hard to navigate because of multiple side-trails that branch off into wooded pathways. I kept following the main trail, inhaling the sharp, earthy smell of nature.

About a mile in, I lost human contact. The silence was suddenly shocking. Despite loading up on gear, I had decided not to carry my phone, which now seemed like a bad idea even though I would be out of reception. Unable to look past the edge of the trail where the hills took a plunge, I carried on quietly. Soon a couple in their twenties caught up. “How much farther up?” I asked. “Oh, it’s right up there,” they said pointing at the flat rocks at the peak, much closer than I thought. I had so intensely focused my gaze on the ground that I hadn’t really taken in the view of the rolling hills.

I couldn’t believe my accomplishment when I reached the top after less than two hours. I didn’t want to stand close to the edge, so I chose two slabs of rock arranged like a chair farthest from the ridge line. Looking over the panoramic Salt Lake Valley, I felt a sharp pang of longing. “Where are you from?” the couple asked me. “Nepal,” I said. “Oh, so this must be super easy.” Well, where would I start? “A walk in the park…” I said after a long pause.