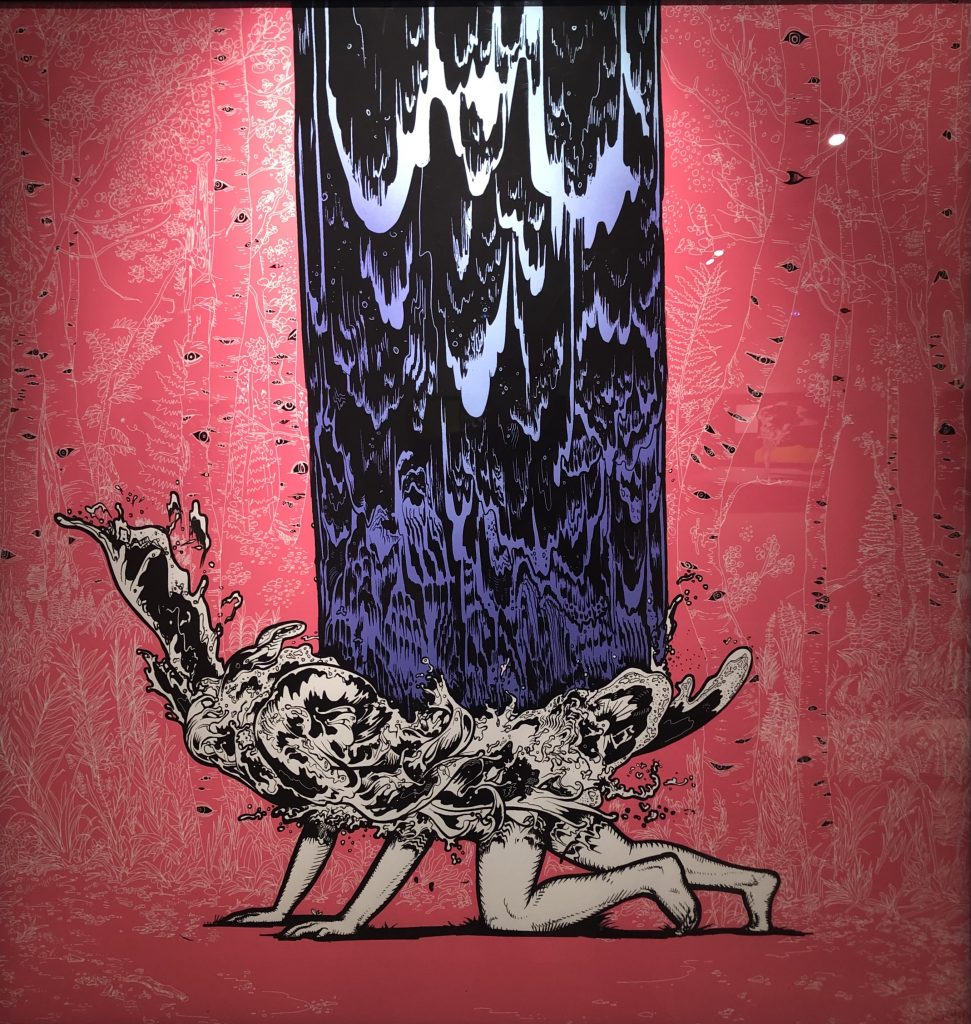 Working in a digital print medium, Jiyoun Lee-Lodge draws figure outlines — sophisticated cartoons, so to speak — of figures set for the most part in only slightly more detailed settings. Often she borrows the overall composition from an almost too-familiar image, like Edward Hopper’s ‘Nighthawks,’ a Manhattan cliché so overdone — MOMA recreated it in full-size 3-D in honor of a Hopper drawing retrospective — that it cries out for some sincere mockery, whether by The Simpsons or Lee-Lodge. What makes her version unmistakeable is that the heads and generally the bodies of her figures seem to be engulfed in explosive bursts of splashing water. Although sometimes, like in “Prussian Blue (Incoming)” or “Waterman: Falling #3,” where the implied source is a Japanese woodblock print, there might be external sources for the water, in most of Lee-Lodge’s action-soaked images the body, and especially the head itself, appears equally as likely to be the source of the aqueous eruption as its victim.

Lee-Lodge graduated from the UMOCA Artist-in-Residence program near the end of the pandemic, an event 15 Bytes covered in reviewing her AIR exhibition at the museum. Normally an artist, after presenting a new collection, will need a while before she is ready to show again, but in her earlier exhibition, in what is probably the smallest UMOCA gallery, Lee-Lodge included only prints responding to the isolation felt during the pandemic shutdown. Most figures featured either a cell phone or a computer, and a window in one apartment doubled as a giant screen. Now, given the larger gallery available at BDAC, she’s added to a few of those a number of larger, more colorful scenes.

Some of the works in this show appeared both times, but because she often works in series, careful observation may be needed to be sure. For example, the version of “Alone in America” (her image based on “Nighthawks”) that appears here has one significant difference from that seen earlier. Outside the famous diner, on the other side of the street, there’s a storefront that in the AIR-show version is dimly lit. Here at BDAC, however, that window fronts a brightly lit art gallery, and the work in that window is an unmistakeable Lee-Lodge Waterman series print. If this represents a greater tendency to foreground her own Covid discomfort, and not to defer so much to a self-consciously inclusive, universal experience, it’s further elaborated in “Waterman: Washing Hands.” Here, in the lower half — the foreground of the scene — a pair of hands are visibly washing each other in a basin, while in the upper half — which shows the mirror on the wall above the sink — the face that belongs to the hands is lost in a large, diagonally splashing wave. Thus viewers essentially become the subject of what they see.

The presence of a mirror in “Washing Hands” invokes a characteristic quality in these works that we should otherwise choose to ignore. Prints, perhaps because of the vulnerability of their paper surfaces, are almost always covered with some form of protective glazing, but in a sense the mirror in the image and the invocation of the viewer as part of the image grant permission for observers to notice their reflections in the glass. Thus Jiyoun Lee-Lodge puts us all in her scenes, as this final image demonstrates. Whether this is a deliberate choice by the artist or merely a product of her meticulous production — or both — the effect, at least in the dark gallery, under severe gallery lighting, underscores her determination to make a comment on something we all are living through in these stressful times.

Whether the point is that we are drowning victims or a particularly aqueous variety of ostriches, hiding our heads in an effort to avoid dealing with a world of problems, or more likely a bit of both, is a matter of point of view, and sometimes even the artist may not anticipate what her audience will see in her art. 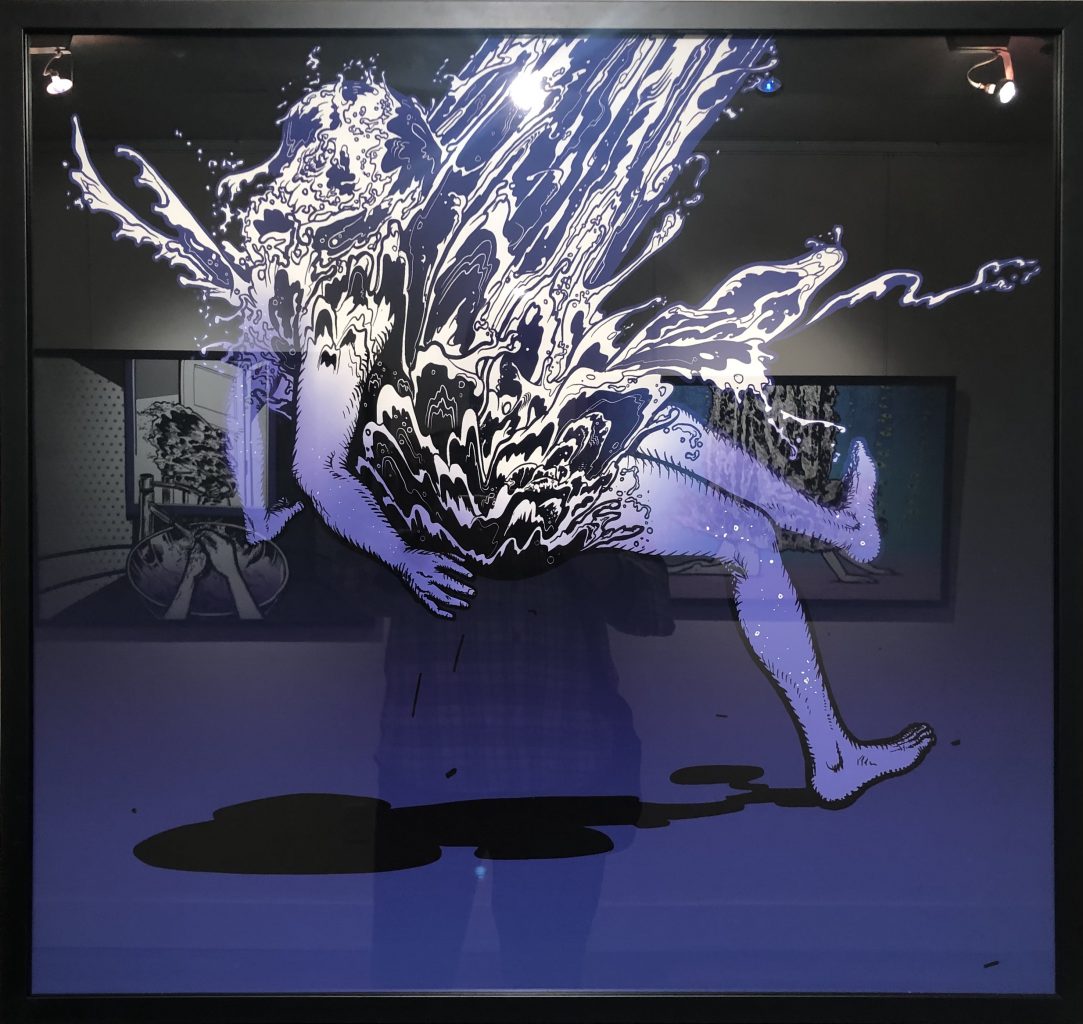