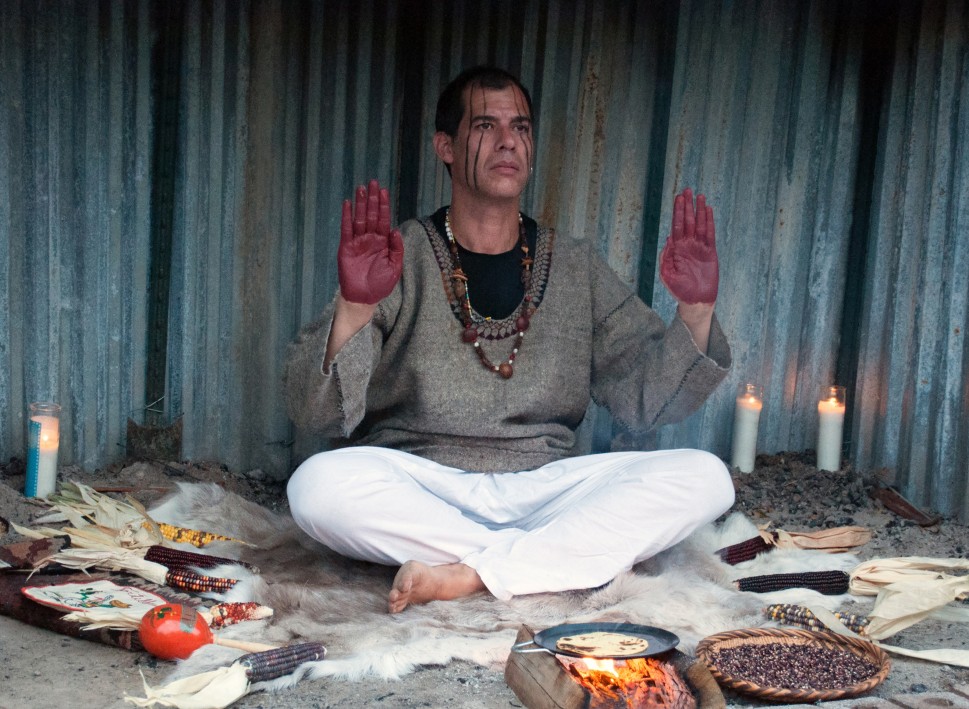 “Without the public, these works are nothing. I need the public to complete the work.” – Felix Gonzales-Torres

I was born in Cuautla, Morelos, a small town south of México City, about an hour drive from the city of Cuernavaca. Morelos is the second-smallest state in México and the birthplace of revolutionary hero Emiliano Zapata. Cuautla is often referred to as “The City of the Eternal Spring” for its year-round gentle climate—and the Nahua Indians who still live there engage in subsistence farming, raising sugar cane, corn, tomatoes, and onions. I was named after my mom’s twin brother, Jorge, a Spanish and Portuguese name derived from the Greek word georgos, meaning “farmer” or “earth-worker.” Although I have lived in Mexico several times over the years, when I was six my parents divorced and we migrated north with mom to the state of Utah.

My mother raised five children while working and putting herself through college, so we all appreciated when our abuelita, “Lala,” would visit to help take care of us. My first memories of smelling and tasting corn masa are woven together with memories of helping my abuelita prepare homemade tortillas. I couldn’t have foreseen how deeply this ordinary experience would influence my sense of identity and culture — but if I close my eyes and concentrate, I can still imagine the warm smell of corn masa cooking on a hot comal, and the anticipation of eating a fresh tortilla.

Years later, while living in Salt Lake City with the woman I would eventually marry, we would host dinner parties, gathering with friends in our small kitchen and sharing stories. As I worked over the hot stove, we would play a game of interpreting the marks on cooked tortillas. I would say things like, “Look, it’s a heart shape, that must surely mean there is love in your future!” Then, five years after that, while we were living in Brooklyn and my wife was pregnant, I decided to read tortillas at an art event. Just like that, I became the Tortilla Oracle.

Of course, a number of other experiences contributed to the artwork. My interest in performance and social practice began around 2008, while I was reading about Relational Aesthetics, a term coined by curator Nicholas Bourriaud. He uses the term to describe art based on (or inspired by) human relations and their social context. At the time, I was also learning about artist Félix González-Torres’ work and his exhibit candy spill, and Rirkrit Tiravanija’s work  “Untitled (Free),” where the artist serves Thai curry and rice to attendees in art galleries and museum settings.

Tiravanija’s practice grew out of the playful aesthetics of Fluxus, a loose group of artists that started experimenting with musical scores, performances, and happenings in the 1960s, and eventually evolved to incorporate elements of everyday life. Like so many of Tiravanija’s works, Untitled (Free) invites viewers to step out of their habitual roles as observers and become participants.

By comparison, González-Torres is considered a process artist, due to the nature of his “removable” installations where a key feature to the artwork is the way it changes as the audience interacts with it. His “candy spill” installations invite viewers to take packaged candies from a pile in the corner of an exhibition space and, in so doing, contribute to the slow disappearance of the sculpture over the course of the exhibition.

Other works also inspired me, like that of west coast artist Susan O’Malley (Pep Talk Squad), where she and her collaborator Christina Amini hold space to listen to strangers talk about what’s on their minds. In 2013, when O’Malley was interviewed by Content Magazine, she said of her inspiration: “I’m intrigued by the idea of how and where we live, how we relate to each other, and [to] our physical environment.” San Francisco Arts Quarterly critic Leora Lutz noted that what made O’Malley’s work so accessible was that it could appear “in every avenue of the public imaginable, from front lawns, to billboards, to garden walks as well as galleries and museums.” And indeed, without an official venue O’Malley and Amini created Pep Talk Squad by moving from place-to-place, giving pep-talks at school assemblies, parks, galleries and parking lots.

These artists, each in their own way, present works in which ordinary people, members of the public or the audience attending an art exhibition become the main protagonists or co-creators in the piece. Sometimes the artists aim simply to capture the roles and rituals of our daily lives; at other times, they create situations and scenarios that invite us to contribute, participate or behave in certain ways. But in either case, the spectator becomes more than a passive observer, playing a role as an integral part of the creative process — and enacting and completing the work while revealing the artistic potential in all of us.

As art historian Rose Lee Goldberg writes: “Historically, performance art has been a medium that challenges and violates borders between disciplines and genders, between private and public, and between everyday life and art. It refuses to follow simple rules and discrete categories, instead selecting a more generous and inclusive approach—one that challenges the simple binary between one who creates and one who observes.” I feel a strong affinity with these artists’ commitment to giving the audience permission to be seen and heard — and become part of the performance.

Taking inspiration from these artists and others, as well as from my own cultural history and traditional forms of divination, I’ve sought to bring Tortilla Oracle into its current form — but it’s an evolving practice. By examining the relationships between artist, viewer, and artwork, I explore how we communicate, how we perceive one another, and why we adopt and play out certain roles within our societies. Participatory action, interactivity, ritual and intimacy are vital to the Tortilla Oracle — and each plays a part in the exchange that take place between the public and the artist/artwork. It has been my experience with this practice that, as with most things, the amount of energy and openness we invest into the process usually equals what we take away from it.

Maize: the sacred food source of the Americas

Cultures throughout the Americas have long worshiped Maize as a deity of plenty. The Corn Mother or Goddess is often linked to renewal of life, fertility and protection. According to Aztec religion, Quetzalcoatl, “The Feathered Serpent,” was the god who provided humans with their first corn to plant. The Popol Vuh explains that the archetypes of the Quiche Mayas were four perfect humans made by the gods of maize mixed with their own blood.

Other Mesoamerican cultures, such as the Olmec, worshiped the maize god as one of the most important sources of life and reproduction. Several figurines found at Teotihuacán were representations of the goddess, with a coiffure resembling a tasseled ear of maize. The Navajo also speak of human prototypes created from corn , and Shamans in many Mesoamerican cultures have used corn as a divination tool.

My process for reading tortillas can vary depending on the venue, but it usually begins with each participant taking fresh corn flour dough in their hands, kneading it, and pressing it. This introduces their energy into the tortilla. I use corn because I feel a strong connection to it. It carries a rich and ancient history that I continue to learn from. My cultural roots add meaning to that connection.

In 2013, during a visit to the Metropolitan Museum of Art in NYC, I came across a 4th century funerary urn from Mote Alban, Mexico. The earthenware figure appears to be a shaman or healer, sitting cross-legged and using corn as his medicine. I felt a strong connection with this figure, and after discovering it, I started donning the ritual face and hand paint I use in my performances.

The main thing I offer in the reading is a sacred space, a brief moment where what matters most is the person receiving the reading. This person will clear their mind and meditate briefly, focusing their concentration on the particular question they wish to ask. Participants then place their tortilla on a hot cast iron pan, where the flow and intersection of influencing energies (maize, water, fire, metal, air, intent) are indicated by the marks made on the tortilla. These marks open doorways into the three times: past, present and future. Tortillas are perfect for this type of reading — one side represents the past as it enters the present, the other, the present as it enters the future. Each reading is treated as a personal ceremony and lasts approximately 12-15 minutes. At the end of the reading, participants eat their tortilla as a way of internalizing and completing the ritual.

When there is reciprocity between the public and the artwork/artist, the exchange that takes place shifts from passive to active. This interactivity blurs the distinction between artist and audience, and the concept of “otherness” begins to dissolve. The work becomes less about who made it, and more about the shared experience. We rarely make time to connect and listen to our divine selves, but through this project I’ve learned that people yearn to be seen for who they are. Not the selves that we present regularly at work or in our social lives, but our deeper selves.

The Tortilla Oracle gives us an opportunity to open up, share, and focus our attention to the love, beauty, and potential in ourselves and all around us. My hope is that this project will not only encourage people to think about our relationship to the foods we eat, but also serve as an opportunity for an art of deep connection in celebration of abundance, fertility, renewal of life, and protection.