Nicholas B Jacobsen Learns Flow in a Desert Landscape 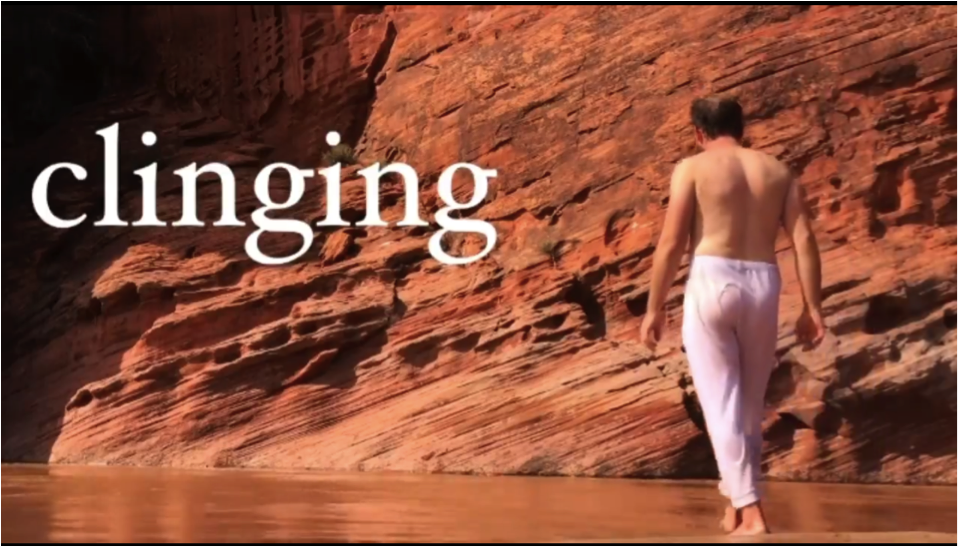 “Nephi taught that by clinging to the word of God we would be able to avoid temptation and not lose our way in darkness”
– Joseph B. Wirthlin

“The truth you believe in and cling to makes you unable to hear anything new.”
– Pema Chodron

These two quotes are juxtaposed together by nicholas b jacobsen’s video work “Clinging,’ which is currently on display at the Southern Utah Museum of Art (SUMA). This 1-minute 48-second video alternates between two video clips featuring jacobsen: in the first, shirtless and wearing loose white pants, the artist walks into a river red with soil; in the second, jacobsen hangs from and clings onto rock walls. The quote from Wirthlin, a Latter-Day Saint leader, appear in sections at the bottom of the video, following by the quote from Chodron, a Buhhdist nun and teacher. The two quotes stand in contrast to each other. In the Latter-day Saint faith, members are taught to cling and holdfast to a metaphorical “rod of iron” that keeps them on the straight and narrow path to God, whereas Chodron teaches truth in groundlessness and view’s clinging as a hindrance to an open, fluid and accepting mind. The video creates tension and feelings of anxiousness as jacobsen, who comes from seven generations of Mormons and was raised in the LDS faith but chose to leave the religion at age 18, grapples with the experience of both being a Mormon and not being Mormon.

In conjunction with “Clinging,” three sculptural pieces titled “Self-Portraits From Memories Blocked” are part of the SUMA exhibit. They are all displayed together in a long, narrow, black room near the back of the museum, the video projected onto the back wall while the three sculptures have been placed on Astro-Turf.  The three sculptural works feel reminiscent of cairns, rocks that are stacked on top of each other to help keep hikers on the right path. But jacobsen’s stacked rocks are not just made of natural materials. They also include cast concrete, lace, the frayed string of a U.S. flag, the legs of a chair,  and items from jacobsen’s childhood (including a baby blanket, a stuffed animal and a music box) wrapped up by shoelaces to form spheres. As portraits, they acknowledge the formative childhood years for the artist while simultaneously symbolizing how the artist has moved past a Mormon upbringing and begun to connect with Buddhism and its emphasis on the flow of energy and balance. In addition, they make reference to the desert land the artist grew up in, dominated by Mormon ancestors who took it from the Southern Paiute. Visually, the sculptures appear to be caught in a precarious balancing act. They are a form of self-critique, the desire to find balance and build an individual philosophy and reality separate from one’s upbringing. 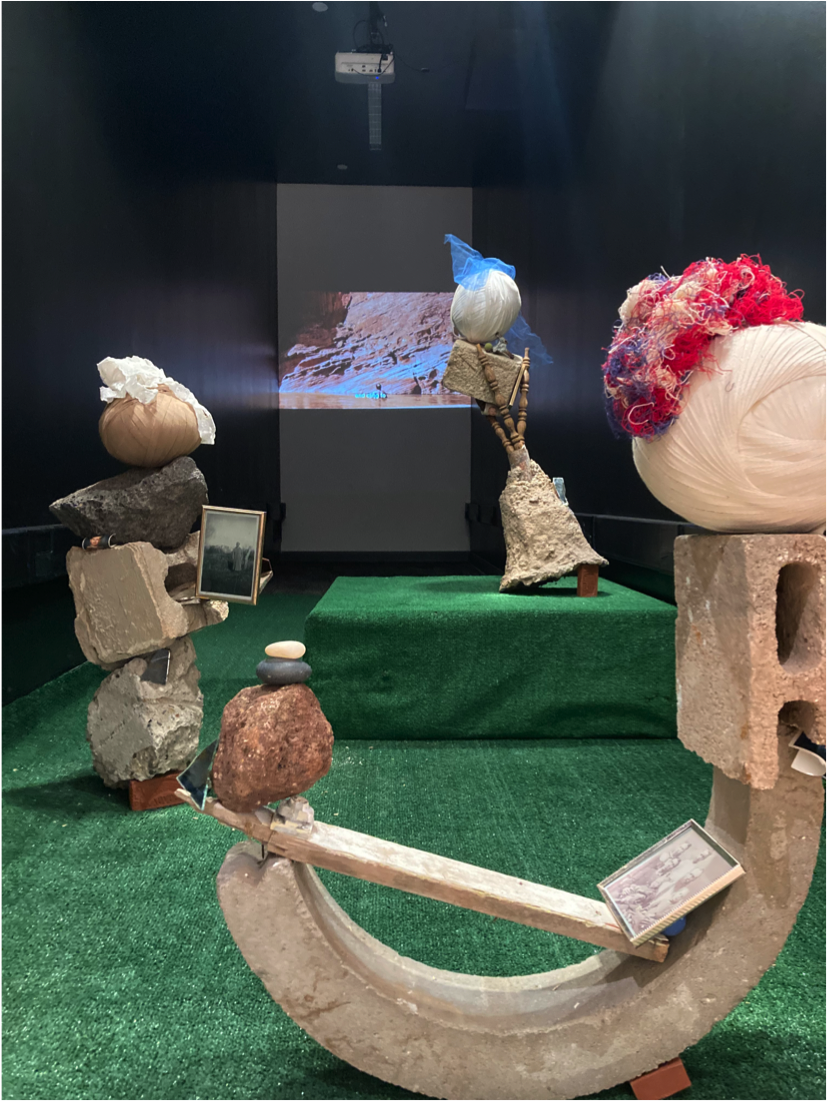 Jacobsen’s work describes a balancing act of being Mormon but also not Mormon; of loving one’s homeland, while acknowledging the blood and tragedy that stains it. The works feel honest and raw, the emotions are palpable and invite the viewer to reflect on their own experiences. Jacobsen’s works do an impeccable job of showing not only the tension and confusion of shifting from one’s foundational beliefs but also the strength and determination of paving one’s own path.

nicholas b jacobsen, Southern Utah Museum of Art, Cedar City, through May 17.