“If we could unpeel ourselves down to our lone intelligences, what might we find in our personalities?” – LAZERos

“Can any human being ever reach the highest light?” – Brinnley Ashton

“Is there a third path?”  – Daenen Rolapp

These are just a few of the questions posed by the artists currently on display as part of Writ and Vision’s Midwinter at the Gates of Dawn. Curated by Camilla Stark and LAZERos, the show features work by twenty artists from the local art collective ARCH-HIVE that explore and celebrate “the journey through the dark night of the soul to the light of morning.” The show quickly takes on a very personal tone as the artists exhibited share their thoughts and experiences honestly and authentically. Many of the artworks are imbued with themes concerning hope, navigating life, personal spiritual journeys, overcoming hardships and growth.

Erik Bremer speaks to this process of growth and overcoming in his piece “Good Gateway.” The work features two men, one standing in the background knees bent, arms raised and fists closed ready to fight the other, who stands in the foreground, seen only from the shoulders up, his head looking back at the viewer, his nose hidden behind a splatter of blood. The background around the first man is golden whereas the background of the second is shrouded in black. The two men wear the same generic white clothes, suggesting they are the same person. In regards to the work, Bremer discusses the darkness he has discovered in himself over the last year and the responsibility we all hold to destroy the demons and monsters we carry inside us. 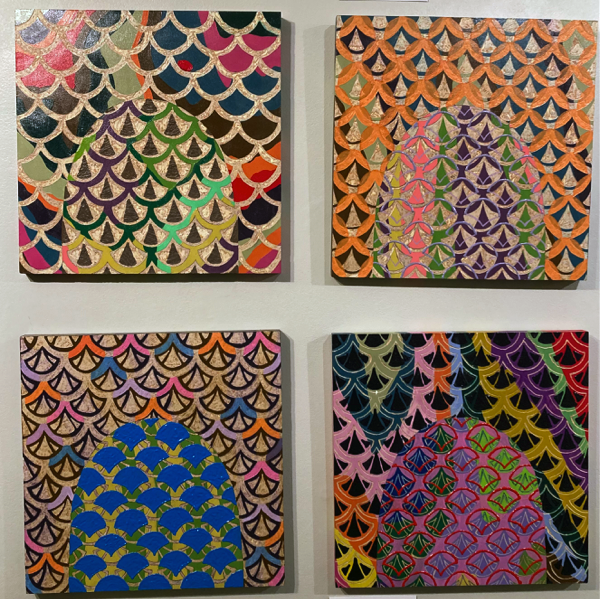 These thoughts are echoed by Rachel Henriksen’s series titled “Dwelling.” This work consists of four panels painted in different patterns and colors. While patterns in the background differ between the works, an overarching theme is a fan-shaped pattern, which stands out in all four works. This pattern, in conjunction with Henriksen’s use of vivid colors, draws the eye and creates a natural movement from one panel to the next. “Dwelling” represents Henriksen’s own explorations of the individual, as well as the community, and relates the visual process she goes through in creating her works with the way her personal awareness has grown and helped her gain a greater empathic connection to the people and world around her. Our capacity to gain greater empathy for individuals and communities around us goes hand in hand with Bremer’s discussion concerning the destruction of the evils that live inside us. Both artists seek growth and improvement, whether through turning inward or through understanding the culture and identities of those around us.

Many of the works in Midwinter at the Gates of Dawn also discuss growth from a spiritual lens, as well as struggles with religion and spiritual convictions. A mixed media piece by LAZERos, “Bittercups,” highlights their belief and hope in God and how this has helped them throughout the pandemic. The work itself is three bouquets, each with three lilies. The green stems and leaves are made from the endpapers of the Church of Jesus Christ of Latter-Day Saints hymnbook. The center of each flower also includes a small clear, plastic cup used by Latter-Day Saints when they take the sacrament. The reference to lilies most likely stems from a popular hymn, “Consider the Lilies,” which is also a reference to a Bible verse from the Gospel of Matthew. “Bittercups” express the hardships we have all faced during this pandemic while also recognizing the blessings and hope that LAZERos has found through a belief in God.

J. Kirk Richards and Daenen Rolapp also expressed spiritual journeys, highlighting the struggles and faith crises that many have. In “A Rainbow Will Prevail,” Richards expresses the struggle to keep ones faith when faced with policies and doctrines that one doesn’t understand and/or disagrees with. The work is likely about the Church of Jesus Christ’s policies on LGBTQIA+ individuals. It is a series of five paintings; each contains an outlined figure that, along with the background, is a dark blue color, except for the center work, which is almost entirely black besides its top right corner where a rainbow is painted. This rainbow is featured across the top of each work, gliding over the man who is seen looking to the heavens, bent with his hand on his head in despair, crouched in prayer, and embracing another individual. Richards’s works represent his own dark nights struggling to keep his faith while also expressing his hope for change.

While Richards’s work focuses on a specific aspect of struggling with one’s individual faith, Daenen Rolapp’s work, “Anticipation,” takes a broader approach to this topic. “Anticipation” explores the feeling of a faith crisis comparing it to the time between seeing the text ellipses and receiving the text. This pen and ink work is done in an oval shape; at its top is a sun with a face and rays that shine across the entire background. The right side of the work features a city with spires and a brick wall and on the left is a tree, bending with the curve of the oval shape, a snake with a human face and crown twists around its trunk. The foreground is filled with the robe and cloak of a barefoot man, his face obscured by his large hood and long beard, his hands holding a book. Peaking out from behind the man on his left side and looking at him is an angel with angelic horns and wings. The work recalls classic religious iconography while Rolapp asks the questions: “Do I move on? Do I look back? What do I take with me? Is there a third path?”

Just as many works here express struggles and challenges, others express hope and overcoming. Two of the artists, Janiece Murray and Rusden Scott, express this through the imagery of dawn. Murray’s “Dawn” is a watercolor piece with a black and white chessboard background that is interrupted by an arched window. The window has a golden frame and outside one can see a soft, pale sky and deep purple mountains. Scott’s work, “Transmission of Dawn,” is an embroidered piece with two faces, one facing left, the other right, waving golden rays stretching between the faces. The work represents how the feeling of dawn can exist in another person who breaks the darkness and brings the light. Both Murray and Scott use dawn to remind their viewers that struggles and hardships always come to an end just as the dawn breaks the darkness of night. 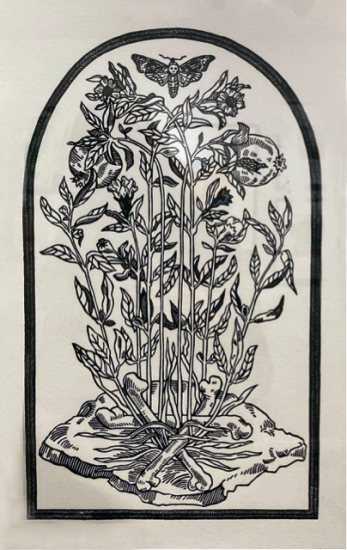 Taelor Worthington also expresses these hopeful themes in her work “Surviving.” The print features a death’s head hawkmoth, pomegranate trees, and bones. The moth stretches its wings wide above the straight stems of the pomegranate trees; two pomegranate fruits can be seen growing among the foliage. Three bones lie in the dirt, intertwined among the stems. Despite the death that lays at their roots the pomegranate trees grow and bear fruit. Worthington speaks to the growth that can be born from hard situations and highlights that hope can even be found when one has reached rock bottom.

The artworks featured at Writ and Vision are strong, emotive, and beautiful. They express themes and concepts that feel pertinent not only to the current climate of our communities but to the human journey as well. The honest reflection from the artists allows space for thoughtful self-reflection making the show feel like a conversation. From the venue to the works displayed, Midwinter at the Gates of Dawn offers an imitate and thought-provoking experience.

Midwinter at the Gates of Dawn, Writ and Vision, Provo, through Dec. 22.

Tagged as: Writ and Vision