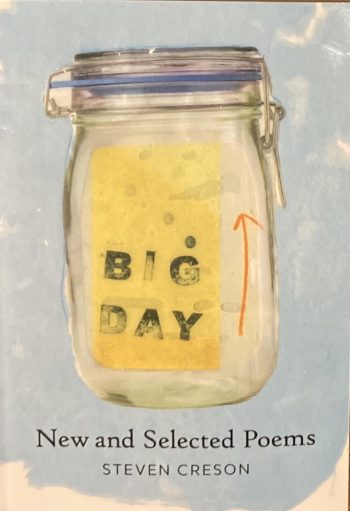 For the past couple of decades, I’ve enjoyed the works of Steve Creson across artistic formats and disciplines: screenings of his own and selected other short films in Belltown basement theaters, back when we met while living in Seattle (way back in years that started with a 1); gallery and studio shows of his paintings and photo collages; live readings of his works, both in-person and online. And as technical director of my Seattle Fringe ‘02 play, Steve nailed the light and sound cues, night after night.

Truly, I’ve been glad to call Steve and his wife Lisa friends for these years, (and I’ve enjoyed her artistic endeavors as well: her audio production mix as part of a theater reading; some of the liveliest garden evenings I’ve known with performances of her group Tripod; solo performance art pieces; and her intricate, delicate craftworks). So I bring personal connections as I read and review Steve’s Big Day: New and Selected Poems.

There is a lot to admire in this slim volume. Collecting works of decades past with recent writings (“recent” as of publication in November 2020), Big Day is a bit of a career retrospective. Really, though, it’s early to begin wrapping things up for a poet with a good dozen years or more left to work with, by his own reckoning at his mother’s bedside, on the occasion of her passing, as recalled in “1.26.13”:

… holding her hand, lightly, her fingers,
as if I were afraid of dying myself,
yet calm, because it will,
me, twenty years
or so from now, this first
anniversary of her death.

From the back of the book forward, time follows a familiar forward line in roughly chronological order. Or you can pick up the book and read from current to past, with the recent works at the start. The poems of Big Day (2015-2020) are followed by earlier works, previously issued in other forms, going back in time to Now Poems, 1995-1996.

Time flows throughout the pages, too. The poet grounds the reader in set and setting where events underlying the words occur in moments of life happening now (in poetic past perfect progressive  tense) and happening all over the world; from Hove, England, to Pony, Montana, to just down the street, perhaps, in “Evaporation Blues,” where:

And time passes through the structure of this poem, as well, subtly, but with natural rhythmical predictability. Early on, the poem marks time, showing without telling. It’s a day in early summer (the start of June, say) as the poet savors, “The weight of the early heat—” and recalls a winter spent anticipating the return of the warmth, all while strolling sweat-dampened through city streets, in section three. Carrying on through the comings and goings in each of 16 numbered sections, the heat of the season builds, number six with its “summer concrete and shade cool” to number ten with its “high heat of mid-day warming, evening still far off,” and on through to the penultimate section, number 15, when the flow of time has progressed to “the week leading up to labor day…”.

In the space of 16 sections of varying lengths, “Evaporation Blues” seems to mark out the steady flow of a season in numbered weekly segments, measuring roughly the span of Summer, from the end of May to the start of September.

So when the final section starts with a plea:

I tend to believe that it’s been here all along, in plain sight, right here now in these words.