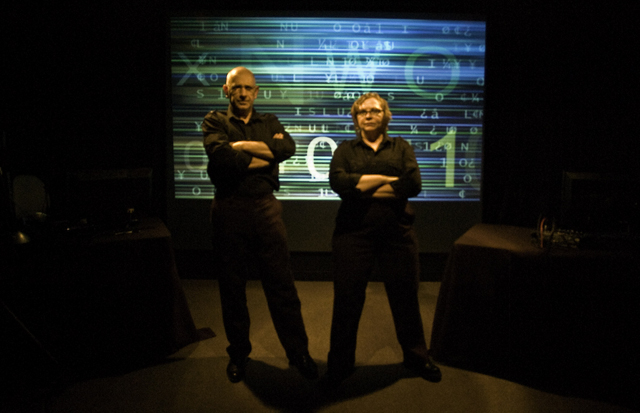 Just walking in to the performance space tells you you’re in for something a little different. Another Language Performing Arts Company, founded by Elizabeth and Jimmy Miklavcic, is housed on the second floor of the Intermountain Networking and Scientific Computation Center, a research facility on the University of Utah campus. The Visualization Lab Black Box (VisLab) Theatre seats about 20 people. For the production of Duel*Ality the space is arranged with two computer work stations in opposite corners. A large screen takes up most of the wall behind the computers, opposite the two rows of comfortable standard issue chairs placed for the audience.

The first line of the production isn’t spoken, it’s displayed on screen. “We have to figure it out.” These words appear with a jumble of images that are at first primitive drawings and become more sophisticated in their complexity. These introductory images are an illustration of the growth of technology, a prevalent theme throughout the production.

The performance aims to take a deep look at the way technology has shaped our interactions with each other and ourselves. It is not a typical play with a traditional story arc–an opening, a climax, and a resolution. Instead the audience watches a couple, Elizabeth and Jimmy, who sit in the same room but interact through email and video conferencing, while their images appear as two separate projections on the screen. It is a visceral experience to watch the actors talk and see their delayed gestures appear moments later as digitized images. The live actors become disembodied, which seems appropriate as they weigh in on relationships and how technology shapes them. The images are side by side, close enough that there could be a virtual kiss. And that’s the point: We interact through technology but no real intimate connections are made. Even their heads on screen turn to face each other but their projections cannot make any real eye contact.

It is a short performance of about 45 minutes. In that time we see images and pictures created by Elizabeth as background to discussions that are more philosophical musings than dialogue. At one point Jimmy observes that even though text is a standardized visual representation of thought, it can still result in miscommunication. He addresses the way we use computers to transmit our ideas: A person wants to share his thoughts with the community, thoughts created by brain chemistry. He types up those ideas, taking them from the storage of his mind to the storage of ones and zeros in the computer. Then he presses a button to send the digitized ideas to others, who read them and store them in their own memories.

Much of the play is simple commentary without judgment. But what did the initial lines of the play mean? “We have to figure it out.” After the performance Jimmy and Elizabeth engaged with the audience through a Q&A where Elizabeth said she is anxious to get back to a time when she isn’t just sitting in a chair to conduct her work as an artist. The analogy she gave was a painter’s brushstroke. It’s a sweeping gesture that moves the entire arm and engages the body. In the digital world there are paint programs where this same motion is condensed to a simple wrist action of point, click, and drag. What we have to figure out is a way to incorporate technology into our lives while maintaining a balance that still allows for human interaction and time to simply be human.

Duel*Ality is playing through March 6. For more information visit anotherlanguage.org 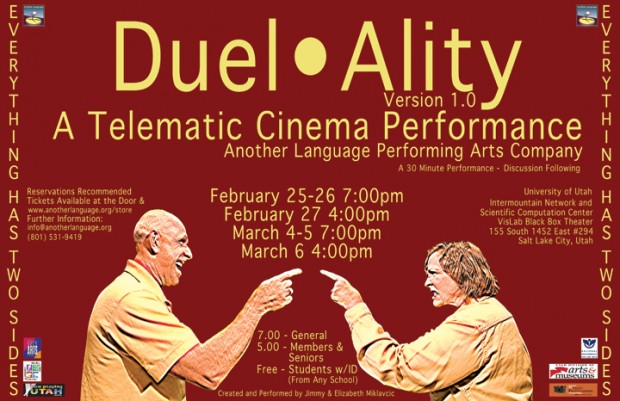