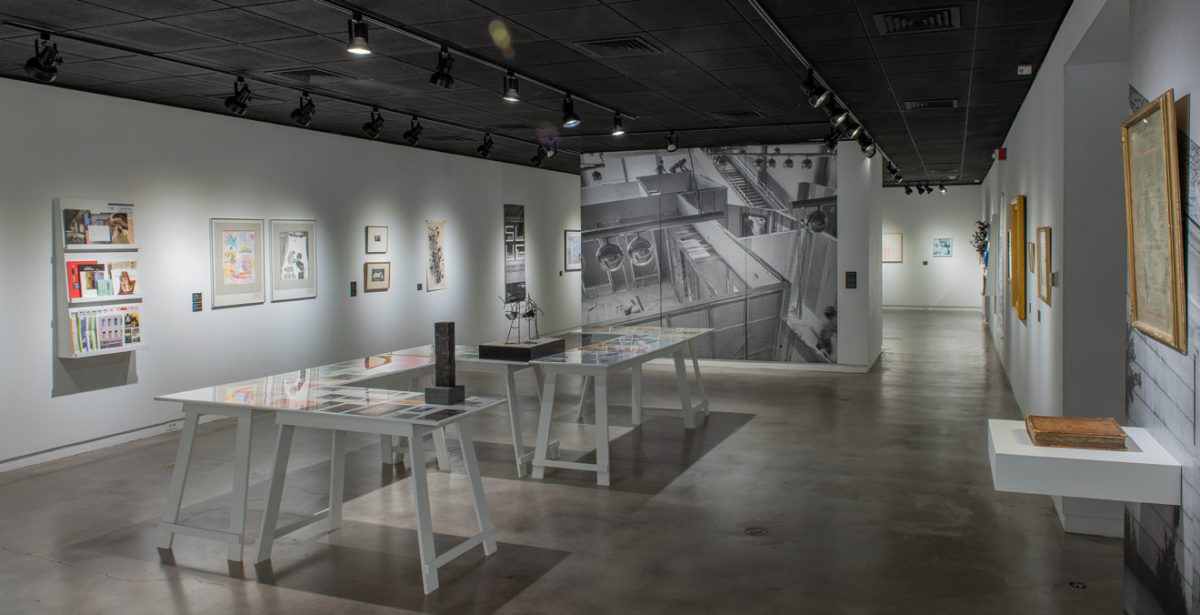 The role the Art Barn has played in nurturing contemporary art in Utah cannot be overstated. Now known as the Utah Museum of Contemporary Art, which is celebrating its 90th anniversary with a retrospective exhibition in its Street Level Gallery, the community-driven organization was created during the Great Depression with the goal of building a permanent home for Utah’s art community. It was a home that served as a catalyst for growth. While some individual professors at the state’s institutions of higher learning may have introduced a few students to modern experiments in art, colleges are, by their institutional nature, conservative. The Art Barn, by contrast, was explosive, inventive, versatile and an incubator for the modern in Utah.

The concept for what became known as the Art Barn was hatched in 1930, while the country struggled to keep its head above water in the wake of the stock market collapse. Art enthusiast Alta Rawlins Jensen proposed transforming a two-storey brick barn (hence the name) located in Salt Lake City at 737 South Temple into a permanent art center. Within months, the barn was deemed inadequate (in reality it seems an option to lease or buy could not be secured), but the idea for the “Art Barn” had caught on: the city donated a plot in Reservoir Park to the fledgling “Art Barn Association” for a $1/year lease, and artists, including Mabel Frazer, Henri Moser, Gordon Cope, B.F. Larsen and Cornelis Salisbury, donated work to raise funds for construction. The name also caught on. And stuck: though the organization’s board tried more than once to change it to something more lofty — they even sponsored a naming contest with a LeConte Stewart painting as a prize —  “Art Barn” remained the people’s favorite.

The institution opened conservatively enough. Ground was broken in October 1931, and in July, 1932, the building was determined to be complete enough to host an exhibition of paintings by John Hafen. The formal opening was a year later, in June, 1933, when Torleif Knaphus’ “Asleep” was on exhibit. Joseph A.F. Everett, a watercolorist who studied with Hafen, James Harwood, and Lee Greene Richards, exhibited that fall (he is represented in UMOCA’s current exhibition by a 1934 watercolor of a train yard). These artists were of the school of Utah art that sprung from the Paris art mission of the late 1800s, where the influence of the Impressionists was strong but most 20th-century idioms were absent. Edwin Evans, one of those art missionaries, exhibited at the Art Barn in 1934, the same year a collection of etchings by Durer, Rembrandt, Van Dyck and others were exhibited. 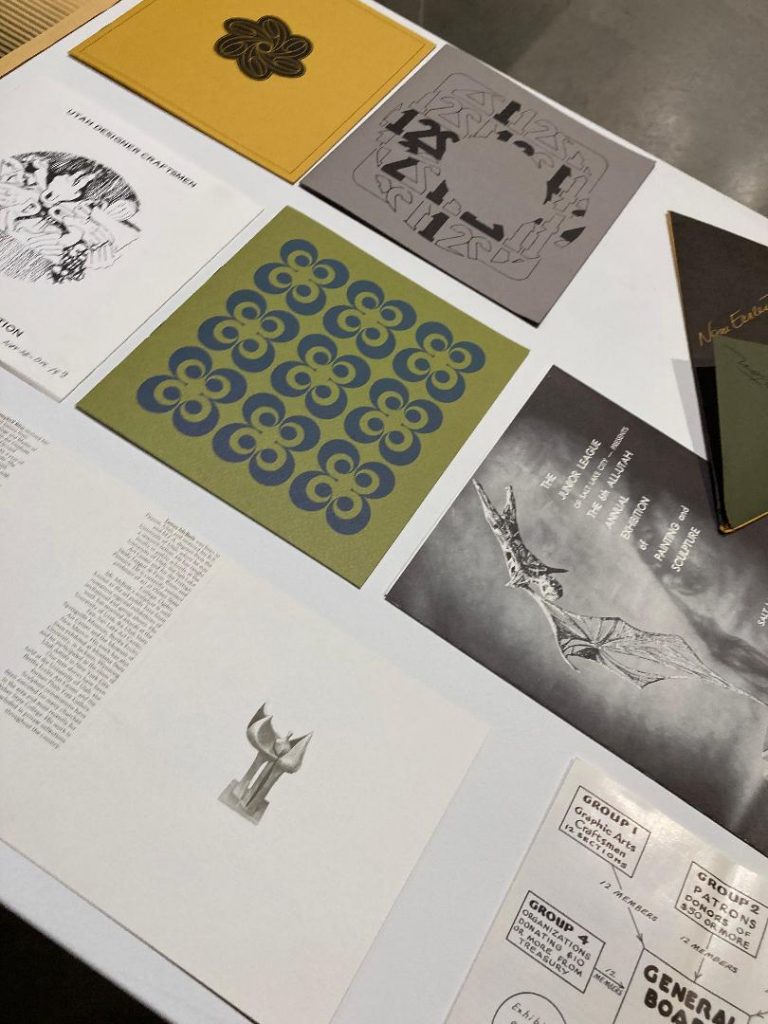 A table of ephemera at UMOCA: Contemporary Since 1931

That was also the year controversy erupted when a work by Franz Brasz (president of the California Watercolor Society) featuring nude figures in a raw, modernist manner, was exhibited. In the debate that ensued, Jensen firmly held the door open to  20th-century modernism when she said:  “We will never develop any art that is real or great in Utah until art can be anything it wants to be.” Two years later, Joseph Sheridan, an artist trained by Hans Hoffman and influenced by Cubism and Expressionism, was seen as pushing the modern envelope in Utah. In 1937, Alexander Archipenko, an early Cubist sculptor, exhibited his paintings, which were characterized by the Utah press as “surrealist.” When they too caused a stir, the Art Barn’s response, which became its standard one, was to hold a debate for and against the merits of the art. Archipenko’s exhibit was sponsored by the Junior League, a women’s charitable organization that was responsible for some of the most innovative and important exhibits in the Art Barn’s early years. In 1941, their exhibit of 14 paintings by van Gogh was a huge success and in the first two decades of the Art Barn, the Junior League brought in other international artists who, though almost unknown in Utah, were on their way to worldwide fame:  Marc Chagall, Henry Moore, Lucian Freud, Barbara Hepworth, Francis Bacon, Diego Rivera, Frida Kahlo.

The Art Barn had the advantage of being neither a private institution nor one owned or run by a government entity. It was created by and responsive to the members of the community. Louis W. Larson, in the New Deal Magazine, wrote “… the Art Barn is a very democratic place, not by any means the exclusive home of dreamy-eyed poets, wistful painters and eccentric musicians. It is a welcome rendezvous for all persons with a wholesome interest in the arts, whether they have already achieved recognition or are merely yearning for the opportunity to find encouragement, help and inspiration.” Larson also was careful to stress that the Art Barn was “not some novel kind of tea room, where grandames squint through lorgnettes and lift supercilious brows to freaks on canvas.” The Art Barn did, however, feature a tea room, which was frequently used for socials. It also hosted weddings, the annual Beaux Arts Ball, and public debates — one of the objects of ephemera curated by Frank McEntire for UMOCA’s exhibition, is an announcement for a debate on prohibition. The Art Barn was as much a social center as an artistic one.

The Art Barn never gave itself over to one style nor served one specific community, but it was certainly a home to most of the innovations happening in Utah. Two paintings at UMOCA illustrate the dramatic shift in Utah art at mid-century. Florence Ware’s painting of flowers and aspens, from 1945, is realistic in its rendering, its subject matter appealing to a broad audience. A decade later, George Dibble was exhibiting a watercolor in which even his early, slightly cubist references to the landscape have been reduced to almost completely non-objective painting.
Dibble was one of many artists who had been exposed to new ideas and idioms on either coasts (he had studied at Columbia) and were bringing their discoveries back to Utah via the Art Barn — both as exhibitors and as instructors, in the Art Barn School. Established in the mid ‘30s, the school originally met in the building’s small basement, but quickly expanded when an addition was added to the original structure (we now know it as Finch Lane’s west gallery).

In its first decade, the school was mostly a local affair, but after World War II, and due in large part to the G.I. Bill, the school swelled with activity, attracting students and instructors from across the county. Under the leadership of Gertrude Teutsch, who had immigrated to Utah from Germany in 1938,  the school expanded from simple evening classes to a full two-year program. A variety of teachers came and went, providing fertile ground for experimentation. Some names are now forgotten in local circles: Frank Bacher, who had grown up in Utah before going to New York, where he became a member of the American Abstract Artists and exhibited at the Jane Street Gallery, was there at mid-century; as was Bert Pumphrey, a Utah native who studied at the Art Institute of Chicago and UCLA; Gerald Campbell came to study in Salt Lake City before ending up in California (and on the cover of Time magazine). But many others, like Doug Snow, Francis Zimbeaux and Lee Deffebach, became some of the most active artists in Utah’s post-war art community.

By the 1960s, the Art Barn had grown enough to hire a full-time director and curator, James Haseltine and get away with a name change — the Salt Lake Art Center.  It continued to embrace the controversial — when a group of nudes was taken down at the University of Utah’s Union building they were taken down the street to the Art Barn — introduce new trends, like Op Art, and engage in the social and political debates of the era. In the late ’70s, the Art Center made its move downtown (though locals continued to refer to the original building in Reservoir Park, now home to the Salt Lake City Arts Council, as “The Art Barn”). It belongs to no one and to everyone. It still manages to delight, engage, bewilder and frustrate. Its current exhibits offer an eclectic mix: street murals, Mormon culinary culture, social isolation, skate culture. At a press conference celebrating the 90-year anniversary, UMOCA director Laura Hurtado said the exhibits are about what the institution has always been about: “What it means to be alive today.”