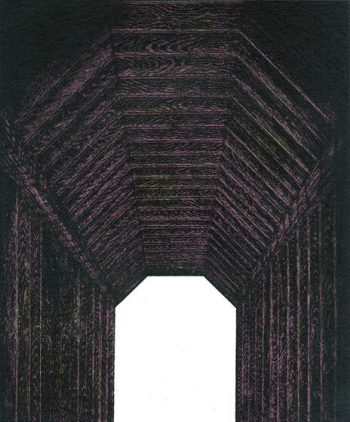 Is it possible to make sense of a large, statewide exhibition constructed on little more than common mediums and the tastes of one or two jurors? Possibly, but it’s not easy; or always advisable. So, for the Utah Division of Arts and Museum’s 2019 statewide annual at the Rio Gallery (mixed media and works on paper, juried by Emily Endo and Jason Franz), we invited our writers to visit and write about one or two works that interested them, without worries about finding a unifying theme. And yet …

Andrew Rice’s dark print “Through the Mountain” is an engineer’s dream, a celebration of elaborately simply cool and calm tailored surface of a five-sided structure which holds up a mountain. Drive through, and you drive through a mountain. (Not just a tunnel.) It is a curious modern world, almost too simple to believe; and the calm, tailored lining of the interior of the tunnel makes us believe it was a simple task, letting us through here. To surprise, Rice dares to add a determined, almost sharp peony pink to the light lighting up edges of the black interior tunnel structure; and there’s a soft brassy gold, barely discernible. Also, tiny particulates of finest-possible, almost goldenish-mica dust. The bright end of this tunnel is pure, shocking, white. Burdens, this print says, can be held up, escaped, driven through. Perhaps with supreme effort; but it can be done; look at this. 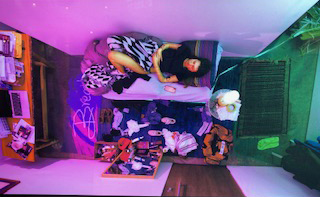 Araceli Haslam’s “Untitled” feels like being trapped in a moment of anxiety. It is embued with the dread of the “impossible task,” the feeling of wading through mud. On a pedestal, angled against a corner, a film photograph is displayed on a lightbox, like a still moment from an indie movie. The image depicts a young woman laying on a tiny bed in a small room. There are clothes, shoes, makeup and a travel bag with a checked-bag ticket strewed on the floor. A coffee cup half empty sits on top of a magazine next to a computer, seemingly forgotten. Magenta and green lighting fills the space, creating an environment that is simultaneously hectic and calm. The color in the image (though unusual for depicting anxiety) lends itself to a moment of melancholy. The bright white light peeking out from the edges of the film creates a barrier, preventing full immersion into the image. The photograph and the lightbox work well together: without the backlight, the image wouldn’t have the same colorful, film-like impact. However, the sliver of white light prevents the image and box from becoming one cohesive object. The lightbox situated on a pedestal transforms the work from an image to an object. The sculptural work is akin to a television on a stand, which makes viewing the image more voyeuristic than passive. Peering in on someone else’s private space is intrusive but relatable. Tracey Emin’s, “My Bed,” which portrays the aftermath of depression, comes to mind An unmade bed, bottles, bags and clothing are strewed on the floor in both Emin’s installation and Haslam’s image/object. The conceptual difference between the two works is the timeline associated with anxiety and depression. The young woman in Haslam’s work is in the moment of depression, whereas Emin’s bed is empty. The vacant bed suggests that Emin overcame the debilitation of psychological distress. Looking in on someone experiencing depression cuts deeper than viewing the aftermath of mental illness. Observing the aftershock of depression suggests hope. Voyaging into a still moment of disarray feels vulnerable and up for interpretation. The easiest of tasks can feel like attempting a backflip with a yardstick taped to your spine. Seemingly simple daily chores — like putting laundry away, responding to an email or getting out of bed — can appear impossible from within such a state. The title, “Untitled,” leaves room for inventing a narrative. Perhaps, the young woman has just returned from a trip. She rests in bed, relieved that she is home. However, she is ignoring the task of putting her life back in order. A chore that seems impossible.
— Natalie Oliver 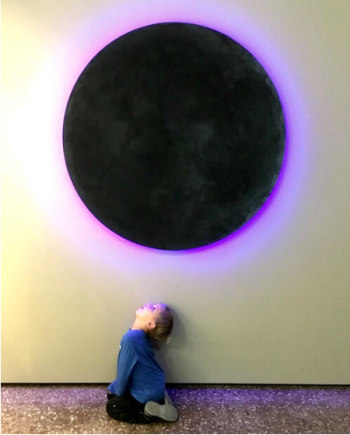 Havoc Hendricks’ “Soft Eclipse” is a textured black circle with a light halo of blue LEDs. It has an apocalyptic feel, with the blue ring surrounding the moonscape and the definite blackness of the textured surface. Hendricks’ use of the circle shape and blue light looks fatalistic, but it also seems a symbol of an eternal round, an endless cycle of death and rebirth. The title, “Soft Eclipse,” could allude to Emily Dickenson’s poem “I’m ‘Wife,’” which is a reminiscence of girlhood turning into womanhood. In this context, the soft, blue eclipse suggests the ending of girlhood and entering into married life, womanhood. Marriage was supposed to be a freeing fulfillment of destiny for women in the 19th century, but it was also a near-total loss of freedom, identity, and personal power. In marriage, women exchanged their personhood for wifehood, their individuality for a shadowed reflection of their girlhood life. Weddings were the end of an independent life as much as the beginning of a joint one.
— Hannah Sandorf Davis 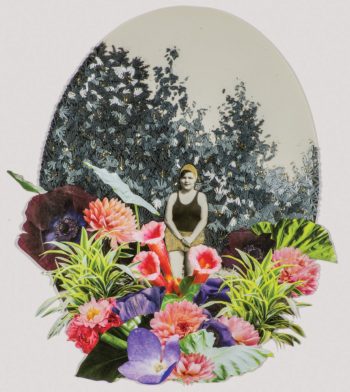 The word “summer” brings to mind the outside air, sun, greenery, and warmth. Miroslava Vomela’s “One Summer Day” is a collage of several of these elements: a vintage photo of a woman in a bathing suit, needlework shrubbery, and collaged flowers. It stirs the imagination, as if the viewer has stepped into the perception of the subject and sees the summer day as the artist does, with brightly colored flowers standing out against the black and white. The oval shape of the collage looks like a portrait in a locket or a small memorial image. It also is an exposition of the type of artwork women were allowed to do until the later 20th century: small scale, threadwork, florals, and female subjects. Even the collage format feels like an homage to this era, when women were encouraged to copy other works or ideas instead of creating their own stories and compositions. Vomela’s collage is both a celebration of the traditional mediums of women, but also an indication of the different art landscape that exists now with the improved freedom and open opportunity for artists.
— Hannah Sandorf Davis 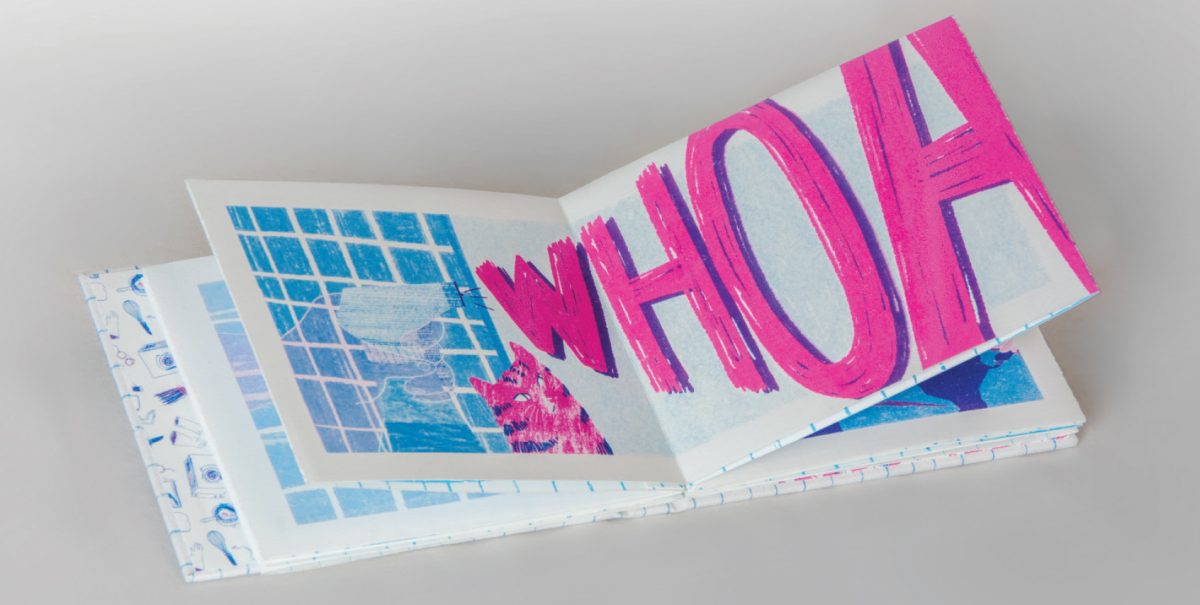 The woman in Kylie Millward’s perfect-bound square book “The Vanishing Woman Reappeared” is living the life of “woman’s work is never done”: cleaning of dishes and tile; ironing and mending of garments; daily grooming roar of hair dryer. Then “WHOA,” like the sound of a jet engine, appears in page-filling print: extroverting begins, to save her pride and sanity. In one page after another, she does unexpected, undemanded things, chosen by her: reading books; creating an artist print; staring at a globe (from delicious, masterly perspective — looking at globe, she’s giant, and the world is small, instead of the housewife’s feeling the world is too gigantic and she much too small); going on hikes, in deliciously comfortable and sloppy clothes, hair dryer definitely left at home; in the final frame of the book, she flies. “Vanishing woman” escapes duty and servitude, which threaten to make her invisible; but interestingly, as person in flight, printmaker, book-reader, vacationer, she commits different vanishing acts; she vanishes to other worlds created by others, or creates her new world after her experiences in new places. But these vanishments are, as the author points out at end of book, seekings, rescue from the mundane. Most important, they’re appearances she has scheduled.
— Rebecca Pyle 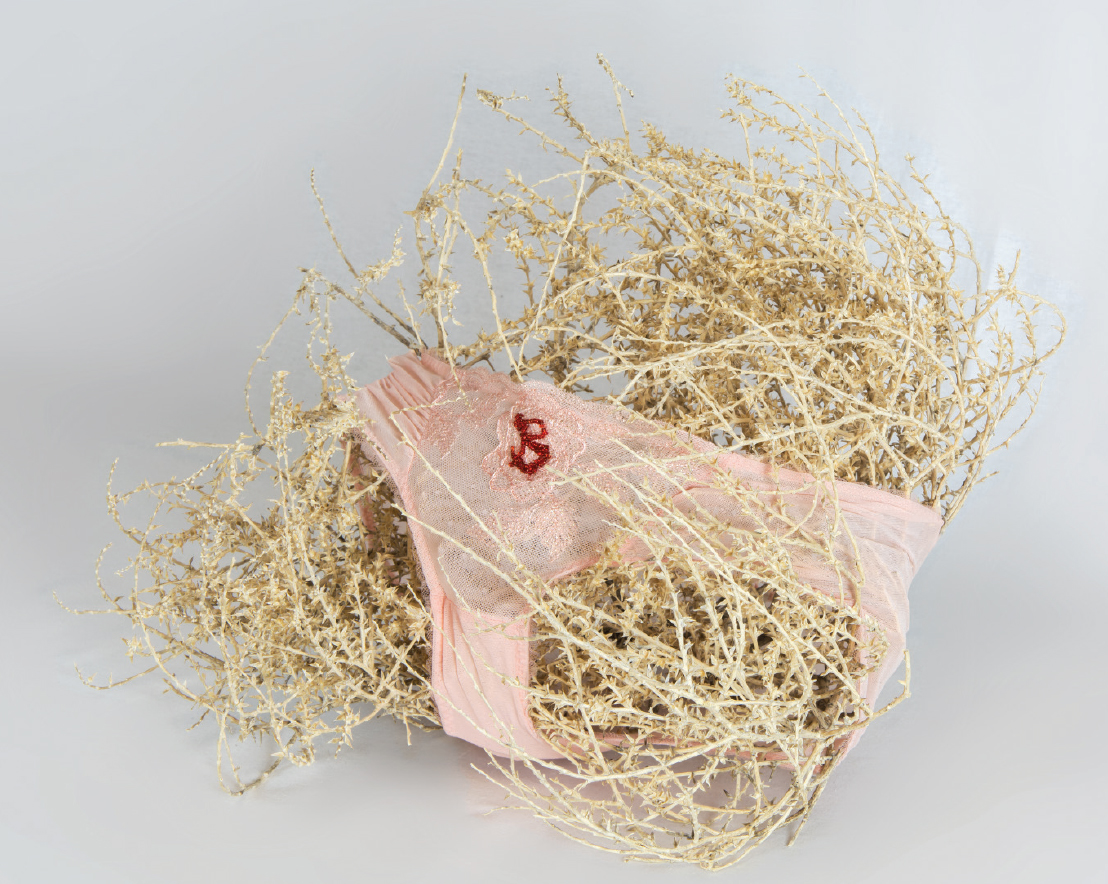 In an exhibition brimming with pieces on paper, framed and hung on walls, I found myself being pulled to a seemingly simple piece that takes departure from the norm: a tumbleweed in panties. “B,” by Adah Bennion, is placed humbly on a pedestal, and displays the simple combination of a tumbleweed in a pair of delicate, baby-pink lace panties. Though minimal in gesture, Bennion brings a somber aggression to her piece with the inclusion of a crudely embroidered “B,” red and centered on the underwear. The piece evokes The Scarlet Letter, and the struggle of Hester Prynne, though not in the way one may expect. Rather than a scarlet “A,” Bennion has chosen to embellish her piece with a “B”; a “B” whose meaning remains secret, though when presented with the dry, crumbling, brittle nature of a tumbleweed, suggestions begin to appear. Does the “B” stand for Barren? Brittle? Burden? To me, the particulars of the “B” is a mystery that does not require conclusion. The “B,” with its bold unyielding presence, tells what it needs to just by being there. Hester Prynne has been taken into the struggle of a contemporary Utah women; she is made to hide shame underclothes, societal expectations taken into the intimate and personal. We no longer need to outwardly brand to bring forth paralleling emotions. I do not know if we are to know who bares this letter, but what I do know is — she feels its presence. The tactile experience of this piece is unavoidable; the idea of sensation of tumbleweed between thighs, pressed against skin by the elastic of the underwear, is enough to make one squirm, quiver at the thought of such an experience. The cheeky character of a tumbleweed sporting panties is enough to draw one in with its delightful presence, and the “B” is enough to cause a step back, to make the viewer pause, end the subtle chuckles at the initial image. Bennion brings a dark satire to a female struggle. Taking the uncomfortable and intimate branding we are forced to feel — the scratches, itching, and discomfort of this gesture — the viewer is left to feel the weight of the embellished panties. Perchance, rather than being guided to “put ourselves in their shoes,” we have been guided toward a slightly more scandalous take on the expression.
-Bea Hurd