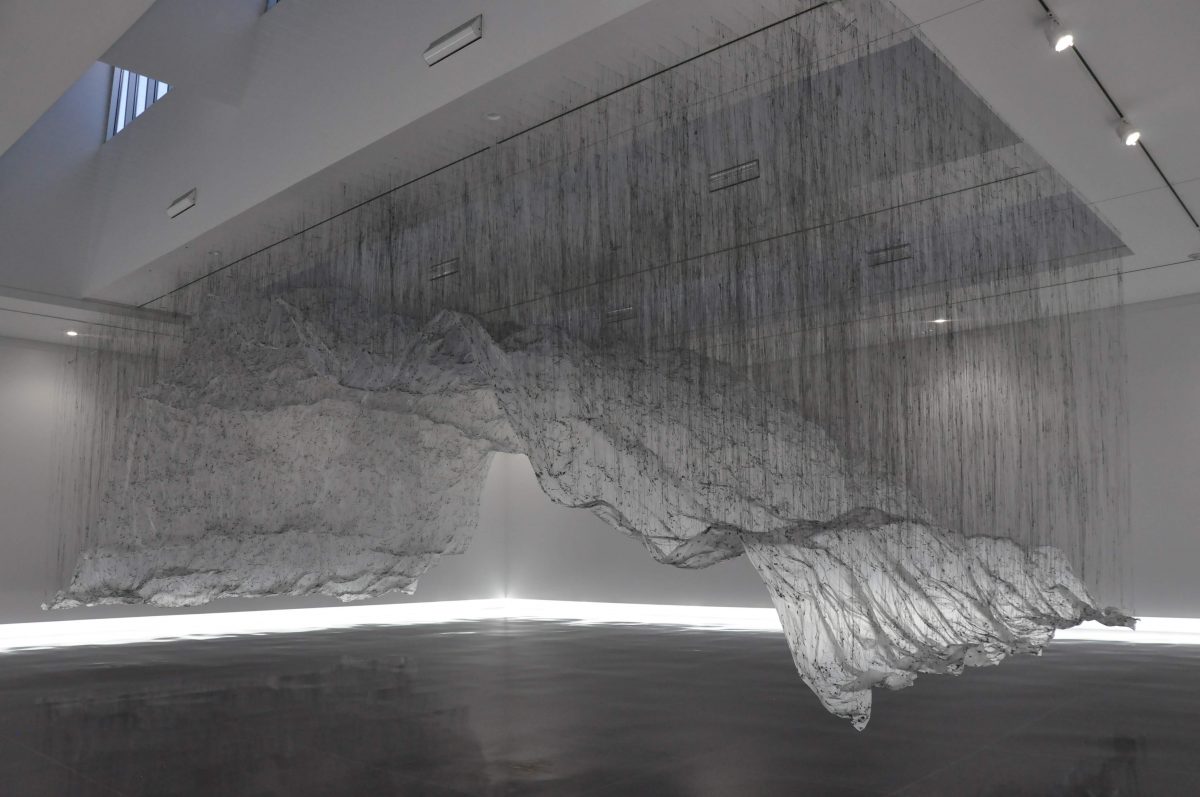 Reverse of Volume,
Yasuaki Onishi’s ethereal, transformative installation at Weber State University’s Mary Elizabeth Dee Shaw Gallery, is created from simple material yet alludes to complex phenomena. Light and gravity contribute to the work’s perceptual illusion in which a wavering plastic sheet appears to float in midair with a ghostly glow. The semitransparent shape cascades through the space in a mountainous silhouette while strings of black hot glue fall from the ceiling like sheets of rain, clinging to the plastic’s shifting landscape and suspending it from above. Reverse of Volume is part of the international artist’s site-specific, ephemeral installation series that has transformed more than 20 gallery and museum spaces around the world.

“We wanted to bring a unique exhibition to Utah that hasn’t already been experienced in U.S. coastal art hubs like New York City or Los Angeles, and that aligns with the Shaw Gallery’s mission of exhibiting artists who are working at the forefront of contemporary art,” says Shaw gallery director Lydia Gravis. “Reverse of Volume has only been installed in the United States a few times, so it’s exciting to bring it to our northern Utah community.”

Onishi and his assistant traveled from Osaka, Japan, to install the work, which used 38 pounds of glue and took three weeks to construct. The process begins by creating “volume,” as Onishi stacks cardboard boxes onto high, scaffolding-like building blocks. The large plastic sheet is then laid over top, acting as a drop cloth while Onishi and his assistant methodically drip strings of hot glue from invisible fishing line strung beneath the ceiling. Drips are spaced about 6 inches apart, forming an abstract design as they spiral and puddle onto the plastic. Once the glue dries and the boxes are removed, the plastic sheet becomes a vacant mold of their invisible mass.

The resulting negative space is what interests Onishi, whose concept for Reverse of Volume is rooted in earlier work. Onishi received his bachelor’s degree in sculpture from the University of Tsukuba in Japan where he began working in clay, wood, and stone. He also was exposed to bronze casting and became intrigued by the lost-wax process, in which outer molds are used to create bronze sculptures from clay models. The mold’s hollow impression is filled with molten metal before being chipped or melted away to reveal the finished bronze form. In his own unique version of the lost-wax process, Onishi created “Gawa (ring),” in which he fastened together a sliced tree trunk to form a wooden ring, then nailed rectangular metal plates onto its surface. He then set the work afire, allowing the wooden interior to burn and disintegrate. This transformative act emptied the sculpture of its volume to reveal a hollow inner core, with the remaining nails piercing the empty space inside. “I was interested in the idea of creating the other side of something,” he says. 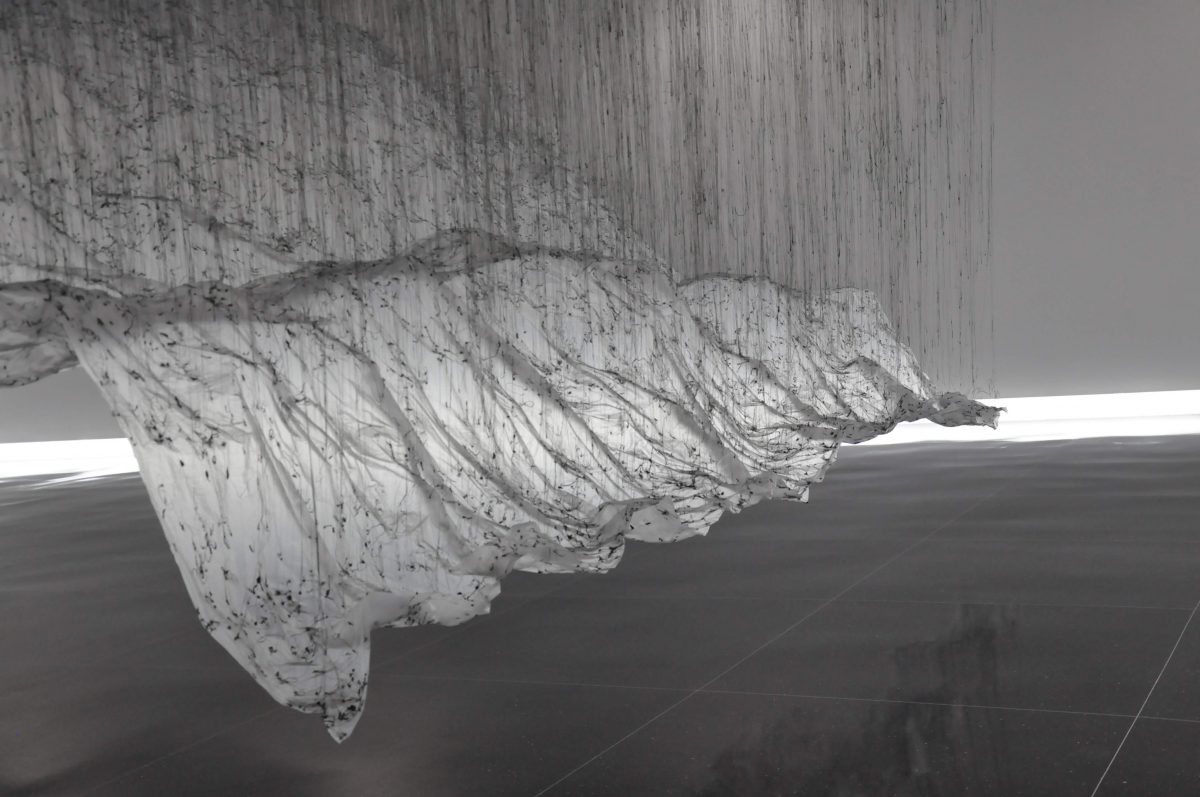 Tiny dots of black on the plastic indicate where the glue has puddled.

Exposing what remains or “casting the invisible” as the artist refers to it, fascinates Onishi, who continued the concept with other shapes and materials. He began experimenting with organic matter such as fruits and vegetables, and introduced his now-preferred medium: hot glue. Onishi encased the food with a latticework of black hot glue then waited for the food to rot and disappear. The dried glue remained as an indicator of the fruit’s former shape and now seemingly invisible mass, just as the plastic sheeting in Reverse of Volume retains the shape of the removed boxes.

Onishi’s monumental installation series also includes Vertical Volume and Vertical Emptiness. For the latter, Onishi dangles bare trees from the ceiling and again drips hot glue from above, draping it over the trees’ gnarled branches as they hover above the floor. Clear glue gives the trees a frozen, crystallized look as the sticky strings collect on the frosted floor below. Like Reverse of Volume, these eerie, beautiful installations similarly rely on gravity while creating their own natural phenomenon.

Onishi’s exhibition at the Shaw Gallery also features a series of two-dimensional works that complement the installation. For artists who thrive on large-scale installs, 2D iterations often come across as an afterthought or in-genuine artistic effort to create something “sellable.” However, Onishi’s 2D work — most pointedly his graphite-and-black-glue panels — is interesting enough and strong enough to stand alone. After layering glue and graphite onto panel, Onishi compresses the material with a silicone sheet to leave an abstract, yet somehow controlled, impressed design on the surface. The polished sheen and textured surface gives spatial depth to these “paintings,” and in a way mimics the undulating landscape of the installation’s topographic plastic sheet.

Reverse of Volume is an exciting opportunity for our Utah community to experience cutting-edge contemporary art by an international artist. But even more importantly, it is an exhibition that expands our view of what art is; Onishi’s work opens up a world of possibilities for young artists by showing that sculpture doesn’t have to be metal or marble to be a valid or impactful work of art.

“Many characteristics attracted me to Reverse of Volume, but I thought students would especially benefit from the artist’s use of simple, utilitarian materials,” says Gravis. “Many sculpture students have access to high-quality equipment and studios while in school, but once they graduate, they’re limited by space and financial resources. Onishi’s work inspires students, and it’s especially altered how they view the creative possibilities that inexpensive, everyday materials can offer.” 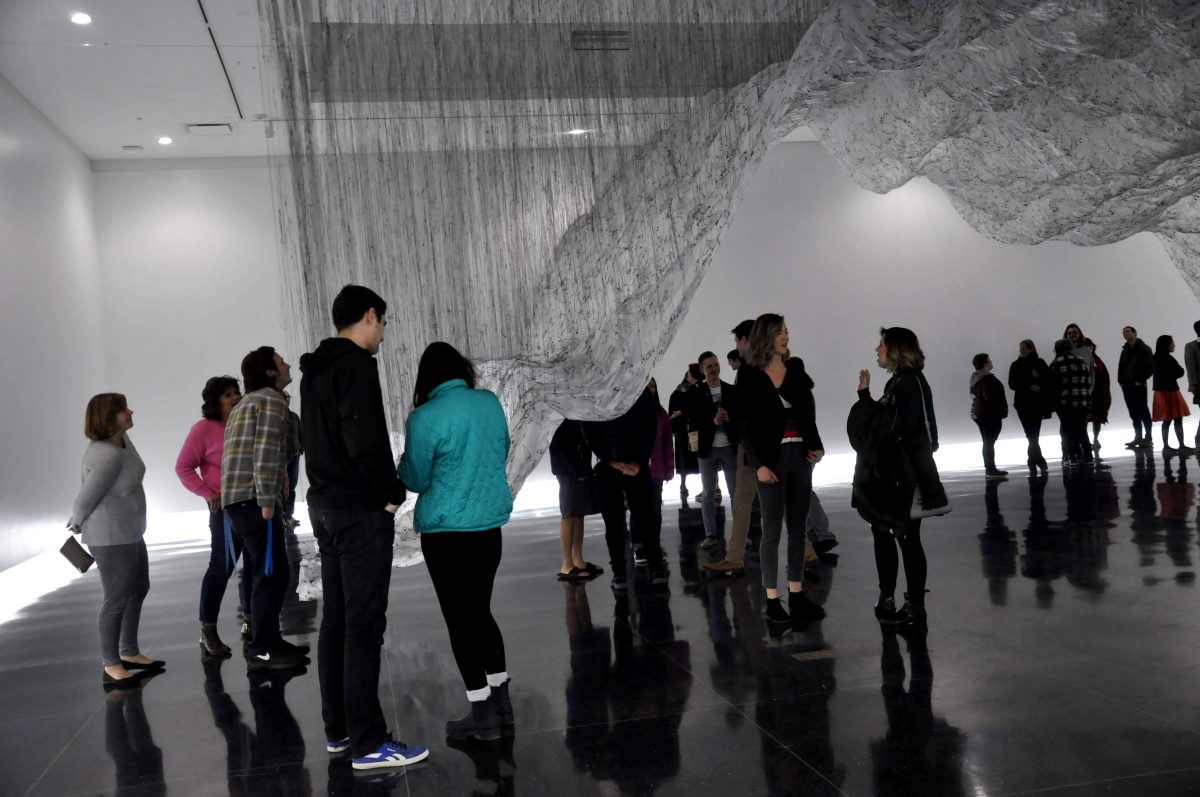 Visitors walk through a space once occupied by cardboard boxes.