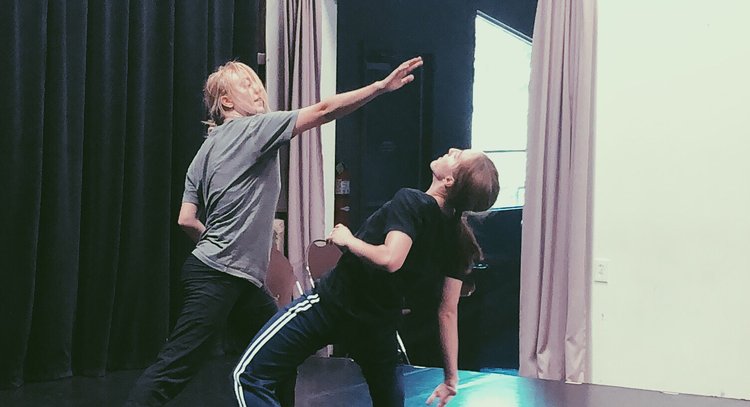 This year’s performances of Suite: Women Defining Space showcased the work of Corinne Lohner, Haley Stassia, and Halie Bahr. The Suite series is dedicated to “support[ing] the creation and presentation of new work by women choreographers,” and is produced by Sugar Space Arts Warehouse through funding from Salt Lake County’s Zoo, Arts & Parks program.

Corinne Lohner is a recent transplant to Salt Lake City via New York University’s Tisch School of the Arts. In “The Schema of Pretense,” she had Eliza Tappan and Ali Lorenz perform games of discordant make-believe and wrestle wildly amidst a landscape of hobby horses, play telephones, and tubby plastic chairs. Conceits flashed from “here are sixty-something ways to mount a horse,” to “pretend I’m dead and you find me and we had a tenuous relationship so there are things left unsaid,” to “what if we got a divorce” and “pretend I’m lonely, and you’re lonely but not as lonely as me.” Tappan in particular is very good at theater games. Her face and voice contort elastically, with the kind of calculated improvisational ease that only comes from possession of precise comedic timing and being very well-practiced.

These small fantasies wound down to a long moment of empty, languishing quiet before exploding. Tappan and Lorenz worked themselves into a frenzy, rolling into each other and all over the room, whispering and shrieking and laughing hysterically. They wrestled like children, like puppies, with anarchy and a caustic seamlessness between tenderness and competition. As my companion at this show put it, “hugging or fighting?” is a format/question that tends to crop up regularly to better (or worse) effect. This time, I really liked it. The window into their intense intimacy broke open towards the end with a drastic lighting change, and from then on the pair’s escalating hysterics became more and more distant, and almost off-putting. A feeling settled over both myself and my companion akin to the faintly disgusted boredom of being the only sober one at the end of the night, the jokes and secret pacts of friends having become inscrutably dumb and out of reach.

“Unmasked Vignettes” was a series of alternating solos and duets, and a final trio. It was immediately obvious that this was the piece choreographed by SALT Contemporary Dance company member Haley Stassia. The familiar and popular style of contemporary dance neatly checked all its boxes right away (trace a line to its points, push against something and then undulate away, sweep a leg, meaningfully place your hand on various body parts, etc.). I enjoyed Edromar Undag’s well-executed opening solo, but felt my attention wander as the piece progressed against a soundscape of varied solo piano waltzes, its keyed-in devotion to musicality dampened by the chaotic traces of Lohner’s piece.

Halie Bahr is an MFA candidate at the University of Utah, and her piece began as Stassia’s ended, with a walking pattern, this time with a larger group and for a longer duration. Bahr’s five dancers transitioned from walking to an across-the-floor combination that could have come from any modern technique class. The combination was repeated many times, with slight variations in movement and facings. A few times, the lights dimmed suddenly and someone would hold up a bright cellphone-flashlight-like beam on a dancer, who would thrash their limbs with heightened intensity. The movement, effects, and intent of the piece were hard to parse and stay engaged with consistently. I’m not sure that the cumulative effect Bahr was reaching for ever coalesced for me, although the piece moved dynamically and was performed very well.