With Sound, Sculpture and a Riot of Color, Mitsu Salmon Honors the History of Japanese-Americans 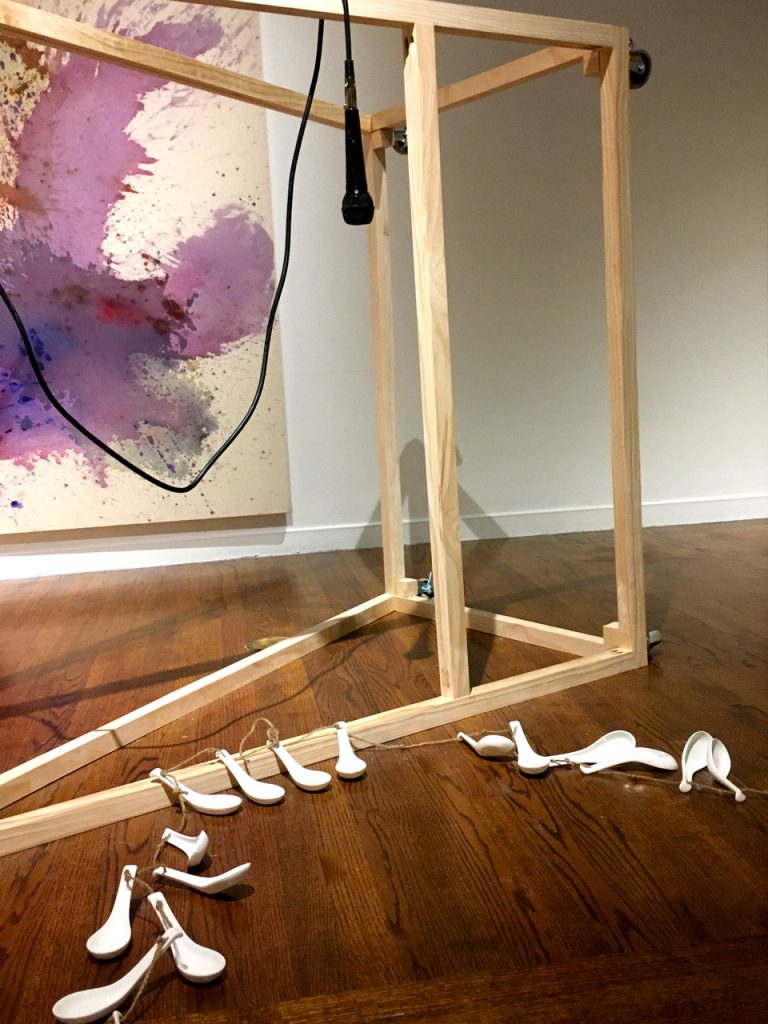 Sculpture, painting and sound make up Mitsu Salmon’s exhibit at the Utah Museum of Contemporary Art (photo by Rebecca Pyle)

Nothing’s more full of promise than a prop room in a theater, and that’s what this corner of the Utah Museum of Contemporary Art feels like, filled with Mitsu Salmon’s paintings on raw muslin.

All six of Salmon’s big paintings (approximately 4 x 5 feet) are happy explosions of color, their shades and hues — except for one iron-ore shade — berry and flower colors, feminine: colors which in a bygone day would be commonly combined in a floral fabric print, for a blouse. But in them also is this iron-ore shade, an authentic one: Mitsu Salmon has dug dirt and ore from around historic railroad tracks and added them to paint, then flung that artifact-paint among her other cheerier flower-bloom colors onto her stretched-muslin painting surfaces.

Two of the six paintings are ensconced on raw, pine traveling-frames-with-wheels; but the first thing you see as you enter is one brand-new wheeled laundry cart. Its striking grace note is one elegant, single, tall bough from a redbud tree, just budding a violet-pink: the contrast between the laundry cart’s shiny metal and dull gray rubber, and the budding redbud, is startling: you’re sure, instantly, you’ve never seen a single tall redbud bough, flowering, in a laundry cart before. 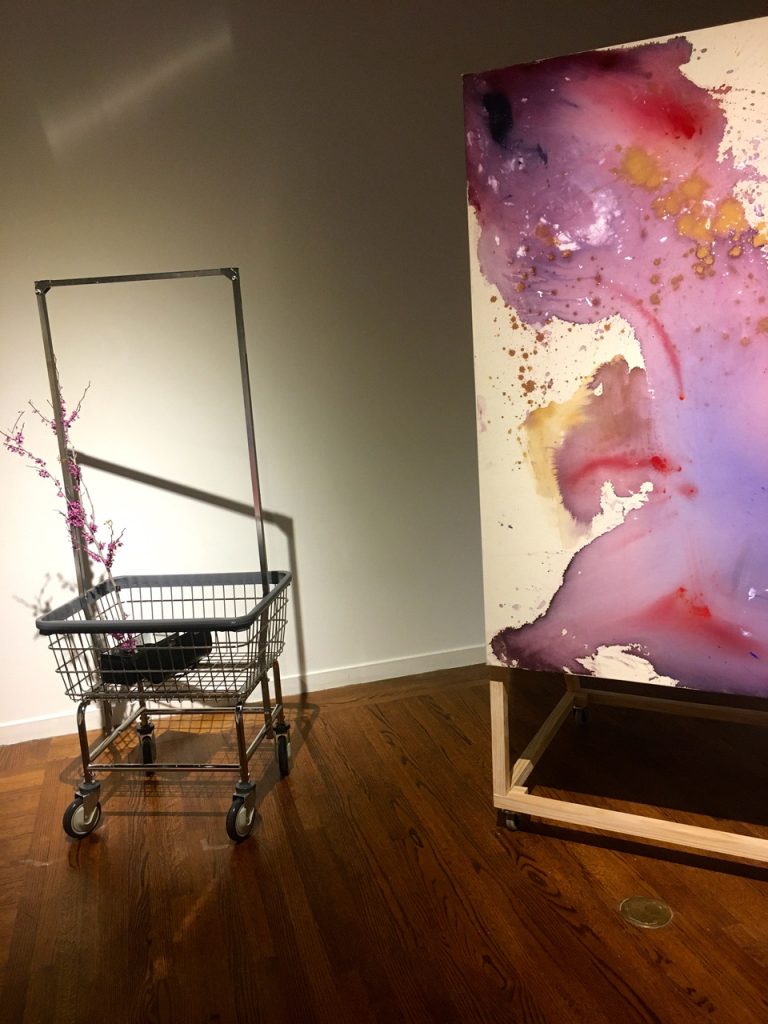 Hanging from and laid out on a pine, stage-like structure are dozens of white ceramic Japanese soup spoons, tied along a string rope inches apart, as if in a sort of working chain gang of spoons; apropos, as Salmon’s show is about hunting down the ghosts of Asian railway workers in the 1800s in the West, and these spoons symbolize them. Gallery notes say Salmon, in this show, is thinking of “… the largely hidden history of Asian labor in the United States, in particular the work done on the transcontinental railroad.”

There is also an intriguing quote by Adrienne Marie Brown, printed out to be read just before you enter the exhibition: “Transformation doesn’t happen in a linear way, or at least not one we can always track. It happens in cycles, convergences, and explosions.” In front of one of Salmon’s paintings is swirled dirt and an old rusty railroad spike (dirt so artfully swirled it makes you think koi might just have swirled through it, their trails remaining). The noise you continually softly hear in this exhibition-room is recorded by Salmon; the repeated tappings are her tappings on old rails, at their sites. The melancholy tapping plays back via a Roland MicroCube, a small dark serious-looking box displayed as if proof of scientific method; that swirl of dirt in front of one painting is historic dirt beside the railroad tracks, more of what Salmon brought back for her pigments. Salmon, daughter of a Japanese-American mother, granddaughter of a Japanese-American couple who long ago ran a laundry, has managed to museumize, to honor, some of the earliest Japanese in America. 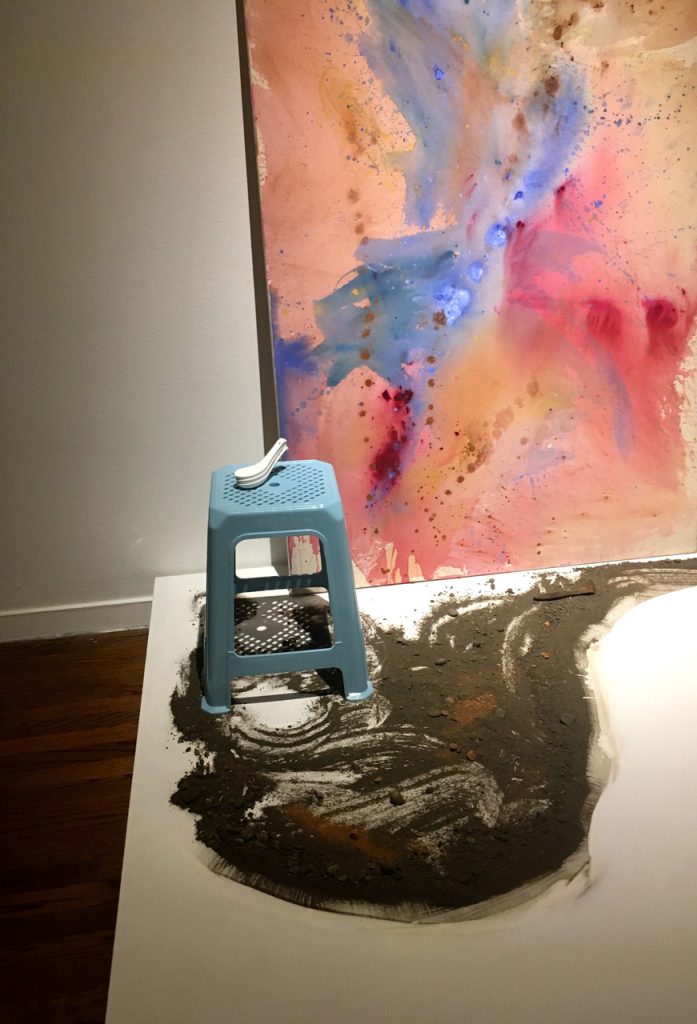 Additional note: at UMOCA, in a ground-level room where paintings and artwork are on display/up for bids, is a painting by Mitsu Salmon (Night Song, acrylic on canvas). Her painting, and a golden temple three-dimensional artwork by Frank McEntire (Reliquary for a Stone) are, in this reviewer’s opinion, the two most entrancing artworks there for sale.