With or Without an App, Audience Participation is Key to Dance Engine 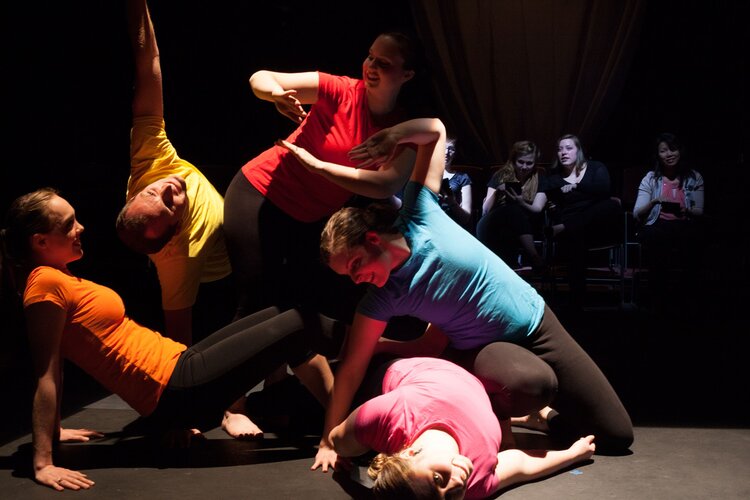 Dance Engine, under the direction of Brigham Young University associate professor of dance Kori Wakamatsu, is an innovative dance experience created through the integration of technology, live performance and audience participation: audience members are able to control production elements and make choices that affect or direct dancers with the use of a smartphone app.

The October 18 – 19 production of Dance Engine at the Rose Wagner’s Black Box Theater progressed through phases of tasks and structures, audience members joining in and exchanging places with the performers, and culminated in a group dance party. The use of smartphones occasionally served attendees well, as they became active agents in the production, but more often was an unnecessary intermediary in a fun but familiar interactive framework. Dance Engine was billed for all ages and abilities, an important demographic awareness that the show admirably fulfilled, but the content and style might best have been enjoyed by an audience composed predominantly of families or groups with young children.

“A mash-up of dance, technology, and YOU!” was the tagline for the show. The goal seemed to be co-extension, rather than immersion — a refreshing ambition. Where immersive storytelling fosters an illusory sense of “being there,” coextensive experience extends “over the same space or time; corresponding exactly in extent” (per its dictionary definition). Within that kind of experience, it becomes alright to explore sharing space and time within a performance, and without pretense.

There was an immediate sense of active engagement upon entering the Leona Wagner Black Box Theater. The seating was arranged at floor-level, on all four sides of the central stage area. I was encouraged to sit in the first of two rows for an optimally “fun” experience, and after demurring, was encouraged yet again, much to my chagrin. Though many of the invitations to participate took on the character of gentle social pressure, much in the manner of church activities and camp recreation, I appreciated that there was a sustained awareness of the audience playing a central and active role throughout Dance Engine.

The six dancers entered in vibrantly colored activewear and welcomed us all with bubbly enthusiasm. After this energetic prelude, the first of five main sections, “Words,” began. In it, words like “pirate,” “zombie,” and “fluid” were selected via audience smartphones from a curated list of options, which in turn prompted improvised responses from the ensemble. This is a common and pleasant improvisational strategy, and it effectively set up the show’s playful tone, but it was unclear how the use of the app was better than the same things being spoken or written (other than the ability to limit the domain of possible words).

The sections “Tempo Tag” and “Lights” played with time and control and made the best use of the well-coded Dance Engine app. The dancers’ choices were subject to the whim of the viewers, such as the speed of their execution, as the rate of the rather generic electronic beat was sped up and slowed down. This section mostly featured repetitive and rather generic hip-hop/top rock that was nonetheless extremely dedicated and energetic.

“Lights” was the most exciting instance of viewer manipulation of the dancers, in which blocks of framed stage lights were turned on and off via the app to perpetuate or freeze the dancers’ movement. One dancer was caught for an extended period of time in the strobe of a particularly relentless participant. The genuine frustration and joy that this drew out of the dancer’s full commitment to the task was the most compelling human moment of the show, and also the moment which best demonstrated the power dynamics and social experimentation that the integrated technology might have enabled.

“Duet with Dancer” was another familiar improvisational theater/movement exercise: mirroring. An attendee’s phone would light up and the assigned dancer would make their way over to them to mirror the phone’s waving, shaking, and tilting. A piece of colored paper or a hand could have served equally well. This task required some whispered instruction and encouragement from the performers, but seemed to please the engaged participants. The performers began inviting people to the stage — to dance, first in duets in response to the familiar tokens of the “Words” section, and then in a larger network of groups for “Group Dance.”  Almost all of the audience was happy and eager to take the stage and explore dance interactions with each other and the Dance Engine performers. This certainly read as a great success of the model on the one hand, although in the other, most task-bearing smartphones went disregarded.

STEM integration in dance and theater is an exciting collaborative opportunity. The technology itself in Dance Engine was effective and well-made. However, its utilization was mostly a transposition of improvisational and interactive frameworks that could be directly accomplished either through gestures or verbal cues. The third-party granting and withholding of activation through the app, which intermittently selected different audience members to participate, may also have inhibited a more potent expression of the shifting of leadership and authority between audience and performer.

It is wonderful, however, to see dance-makers collaborate meaningfully with those who work in computing and technology. There is also a significant joy in seeing a room full of theater-goers engaging in playful and uninhibited movement. I especially enjoyed watching a performer quietly invite one of the ushers into the exuberant “Group Dance,” which indicated to me that the performance hierarchies had been pretty earnestly dismantled.

Dance Engine is an ongoing and evolving project. There is still some room for the critical integration of technology into performance to fulfill its potential, but this is amidst a great deal of existing and successful enthusiastic audience engagement.